The racing will continue until morale improves.

Friday marked the third of four races in the Windjammers’ Summer Solstice Race Series. I had quite a bit of anxiety on the drive down to the shore. I suppose that running into stationary objects doesn’t tend to prop up one’s confidence. Having a week to marinate on how I let a first or second place slip into a DNF didn’t help.

That was some of the best flying I’ve seen to date—right up to the part where you got killed.

Unlike the previous week, Friday was predicted to be a return to form for Barnegat Bay: winds gusting into the mid-20s from the south, with lots of fetch to kick up the sort of steep chop that will completely disrupt a lighter boat’s momentum. We were out of contention, outmatched boat-for-boat, and about to get beat up. No matter how valid the negativity, I still felt that, like Maverick after Goose’s death, I needed to get flying again.

Things got off to a great start. I was so concerned with jib and reef selection that I left all of my personal sailing gear in the car. We had to bang a quick 180 in the marina and hot-dock into our slip so that I could get my gloves and hat. At least I had the sense to bring my lucky Tilley—the hideously stained older one with the brim so starched with salt and grime and joie de vivre that it can’t blow down into my eyes.

The wind was up, as predicted. We went with one reef in the main and left the 135 on, with the idea that we could partially furl it upwind and deploy it all downwind. I thought I’d botched the start, as we were well toward the port end of the line before we trimmed in and came close-hauled, but we made it just inside the pin. We probably should have immediately gone to port tack, since we were heading toward the middle of the bay where the waves were at their worst, but we continued pounding along with Restless and Free Spirit on starboard. We had to tack twice to get the mark and deal with the traffic of the other boats that had gone up the other side of the course, but dealing with traffic means that we were mostly keeping up. Scrambling around the wet and heeling boat made Jen extremely unhappy.

After tacking at the windward mark, we unfurled the jib and had a good pole set. The bigger boats put their waterlines to work and mostly sailed away from us. Once again, Tiki rounded the wrong mark, yet for some reason, it was determined over the radio that all the boats should just use the wrong mark instead of disqualifying the boat that failed to sail the established course. We followed the race committee’s revised instructions, and on the second lap we left the starting area on port tack and went up the side with marginally less wave action.

I thought that three boats in succession were going to hit the windward mark, which was another fixed government mark (ICW 40) instead of one of our inflatables. Sunset would later claim to have missed it by 8 inches. Restless didn’t seem much further off. Island Breeze passed us on the second upwind leg, but came so close to hitting the mark that I thought their bailout was a penalty turn. As they were getting their legs under them again, we tacked twice quickly, leaving plenty of room to go around them and 40, and would not relinquish our lead over them on the final downwind leg. 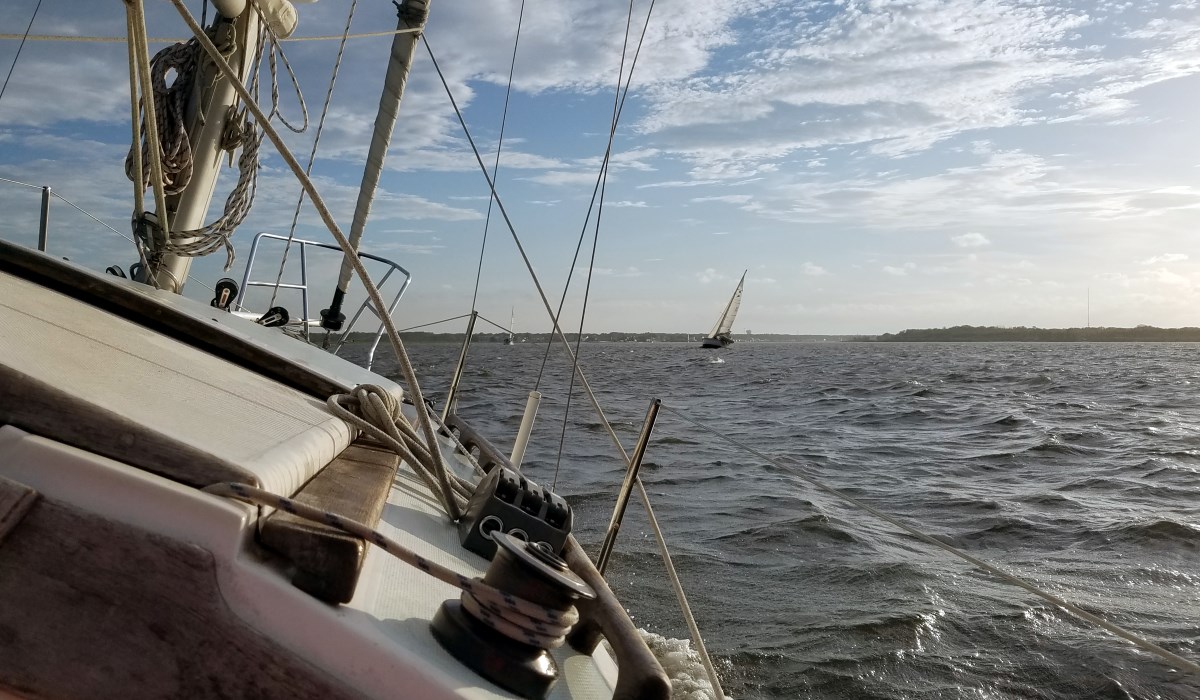 Photo of us returning to port, courtesy Sailor Steve

Overall, we came in fourth of six boats. Not a great finish, but not that bad considering the conditions and the fact that we were the lightest boat by more than 3,000 pounds. Sailor Steve and Jen did great under difficult circumstances. I doubt that we could have sailed it much faster, except for maybe going to the less punishing side of the course on the first leg.

We had intended, again, to stay overnight on the boat, but the forecast for Saturday wasn’t great, with strong lines of storms (the remnants of a tropical storm in the gulf) pushing through in the morning. We instead returned on Sunday for a pleasure sail. 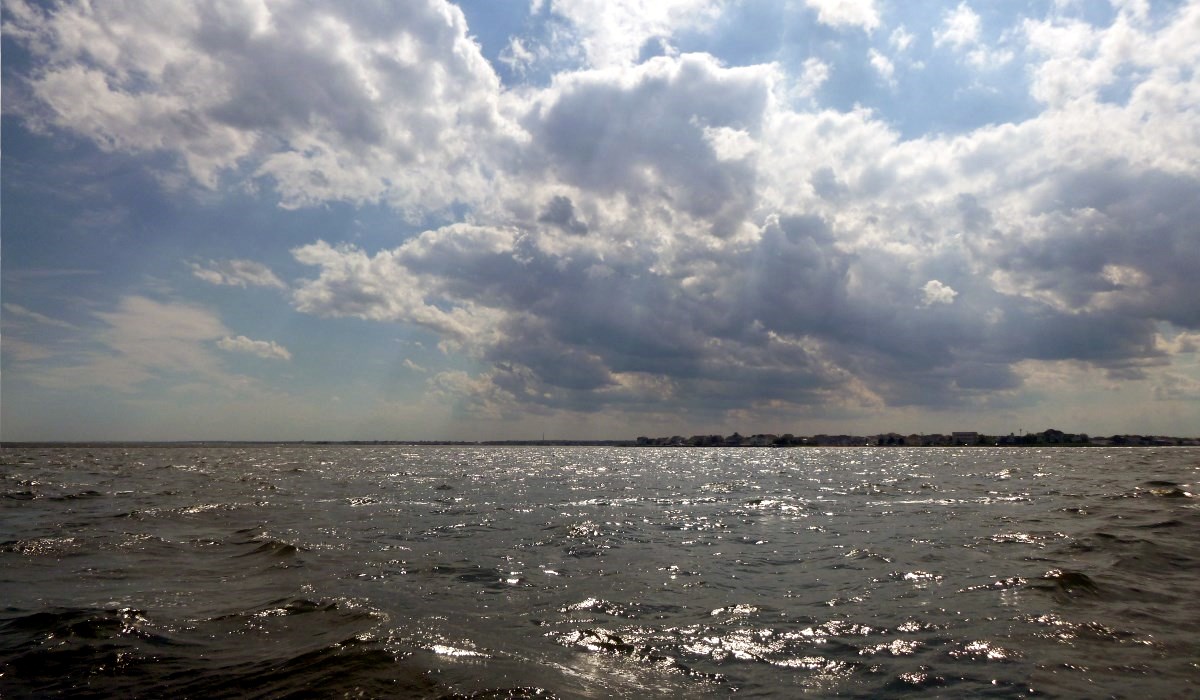 We went for a leisurely upwind sail down the length of the bay. At BI, we tucked in a reef, just so that we’d have it in as the wind built throughout the day. We practiced reefing while underway without motoring into the wind, just to get it down, and we vastly improved the process over the last time, with minimal time spent flogging the main. Shortly thereafter, we came about and started making our way back up the bay on a broad reach. I briefly wanted to shake out the reef because I was following a big Catalina that was overtrimmed and I know we could have taken them, but I reminded myself that we were not racing. I turned the helm over to Jen, where she remained for most of the trip. She even stayed at the helm when we came around 40 and had to go wing-and-wing to head toward 39. She was mostly calm throughout, even though she’s not a fan of steering downwind. 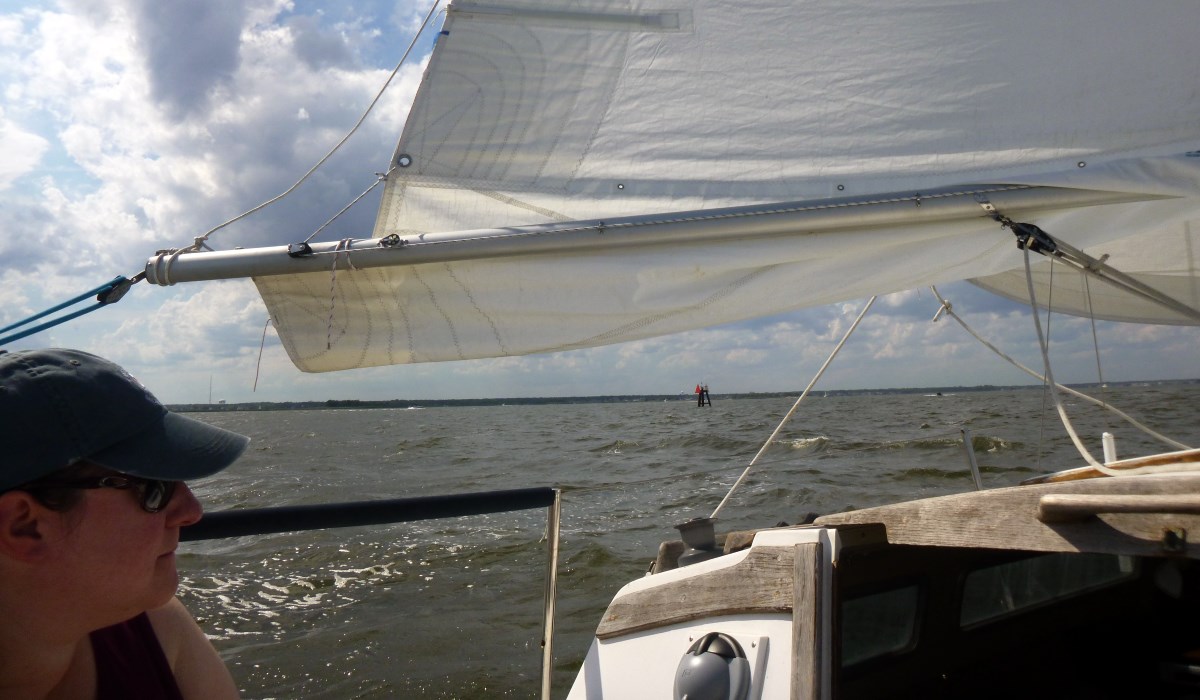 I took the helm as we approached our sedentary nemesis, Marker 39.

We sailed past it without issue and came about. We soon had to tack to stay in deep water, and in the process, Jen lost her Windjammers hat overboard. I heaved-to immediately and we spent some time looking for it with boat hooks in hand, but it was a goner. It was one of the old-school hats from when the Windjammers had a clubhouse and swag, and is now irreplaceable. The above photo is, sadly, the last of Jen’s WJ hat.

As expected, the conditions deteriorated throughout the day, and we were glad that we had reefed down. We found ourselves bashing through waves again and decided to pack it in when we got as far south as Cedar Creek. 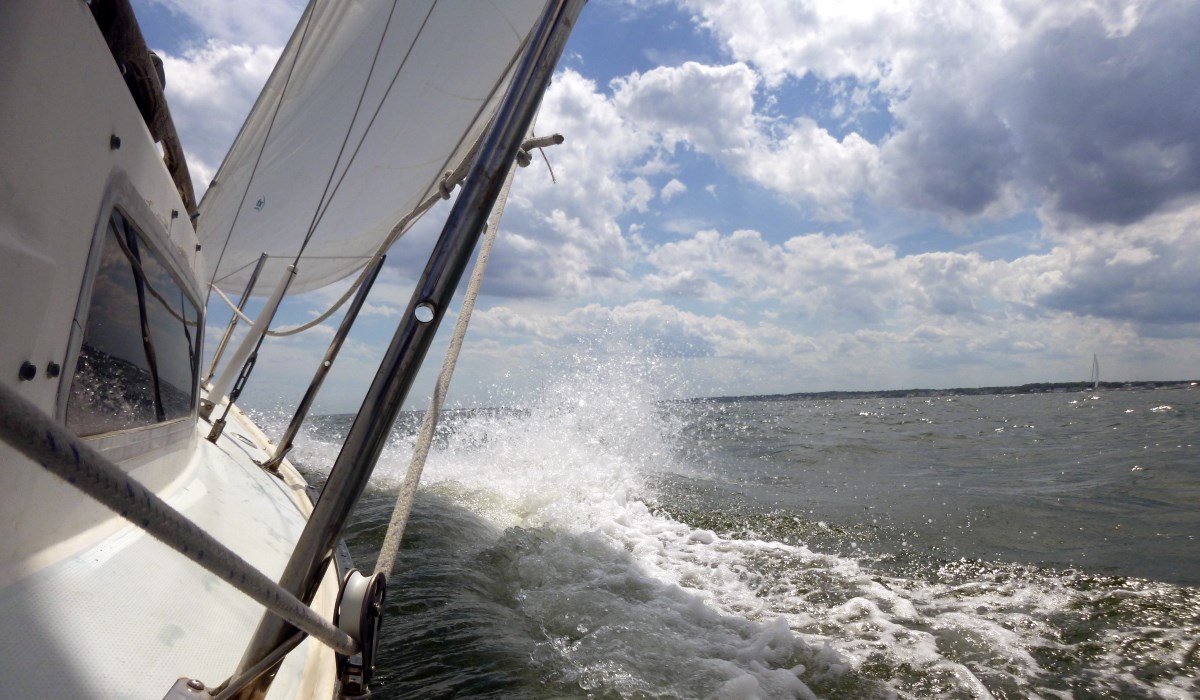 We wound up having a pretty strong weekend of sailing. While we didn’t exactly return to the race course in triumph, we sailed a complete race and did about as well as could be expected. We did a lot of little things right on Sunday and mostly took it easy, which always resets my head and will likely make the upcoming week go more smoothly. It was good to be back out there.