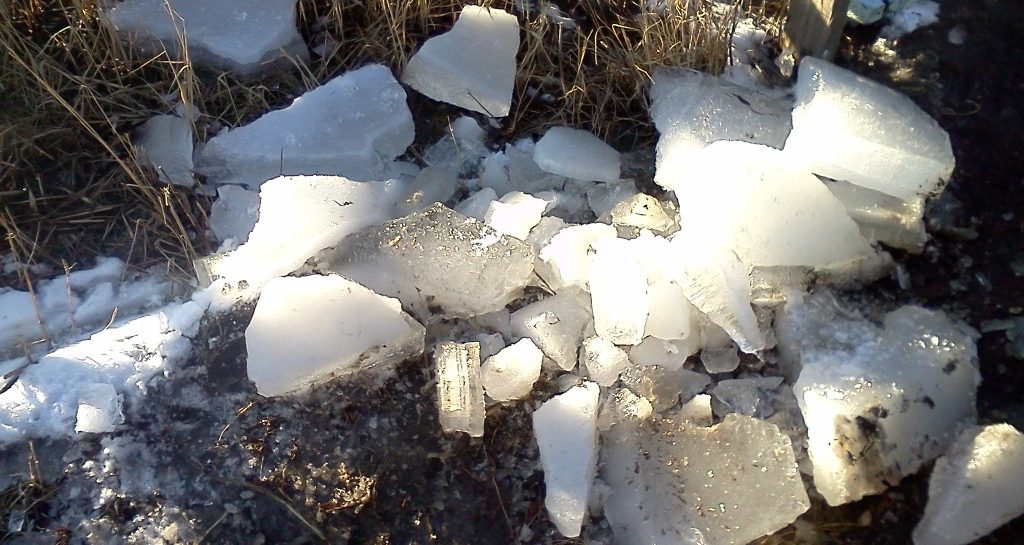 The Nor’easter that pummeled Massachusetts this weekend mostly missed New Jersey, and we only wound up with a couple inches of snow. However, with gusty winds and reports out of our marina that the unusually high tide had once again come up into the parking lot, I thought it was safest to take a trip down and see how our cover had held up.

As mentioned previously, we didn’t use our good cover this year. It doesn’t work with the mast down and we didn’t want to put the mast back up after Sandy just to use the cover, so we attempted to use a tarp. My main concern was that it would simply blow off or get shredded like our first one did. As I pulled into the yard though, it was definitely still there and looking ok.

Upon closer inspection, there was a bit of a problem. The mast isn’t on the centerline of the boat—there’s a dip in the middle of the stern rail for the traveler, so the mast is resting on the high part to port. That apparently didn’t leave enough break angle between the mast and the starboard lifeline, so water pooled up in the cover. A lot of water, maybe 18 inches deep with about 4 or 5 inches of ice floating on top. That’s a lot of weight resting on some non-load bearing stuff.

My first thought was that I’d simply slide the ice off and then dump the water. This seemed straightforward, but there were a few problems. Most notably, the lifelines are over my head when I’m standing on the ground. To even see the ice, I had to climb on the side of the trailer, and there is no way to both hold myself up and move the ice. It’s essentially vertical—I can’t just balance up there and still have any strength to reach up over the lifeline, down to the ice, and then lift it up and out. In my first attempt, all I succeeded in doing was dumping many gallons of ice water onto myself, which ran down my sleeves, saturated my decorative leather driving gloves, and guaranteed that the rest of the day in the subfreezing breeze would be notably unpleasant.

My next attempt was to stick my novelty aluminum broom through the hole in the cover at the transom and lever the ice and water off, which bent like a paperclip and did exactly nothing.

So much for finesse.

As my core body temperature began to drop and my hands started to feel like a bundle of raw hot dogs, I decided to switch up to brute force/rage. I obviously was not prepared for this eventuality and had no tools, so I went to my truck to look for anything that I could repurpose. It turns out that while hammering over your head is wildly uncomfortable and inefficient, a trailer ball and hitch has enough mass to break ice. Of course, the top couple inches was softer snowy ice, so it mostly made 2 inch circular impressions and an explosion of ice chips, but I pressed on and eventually got it into chunks that I could maneuver and lift with one hand. 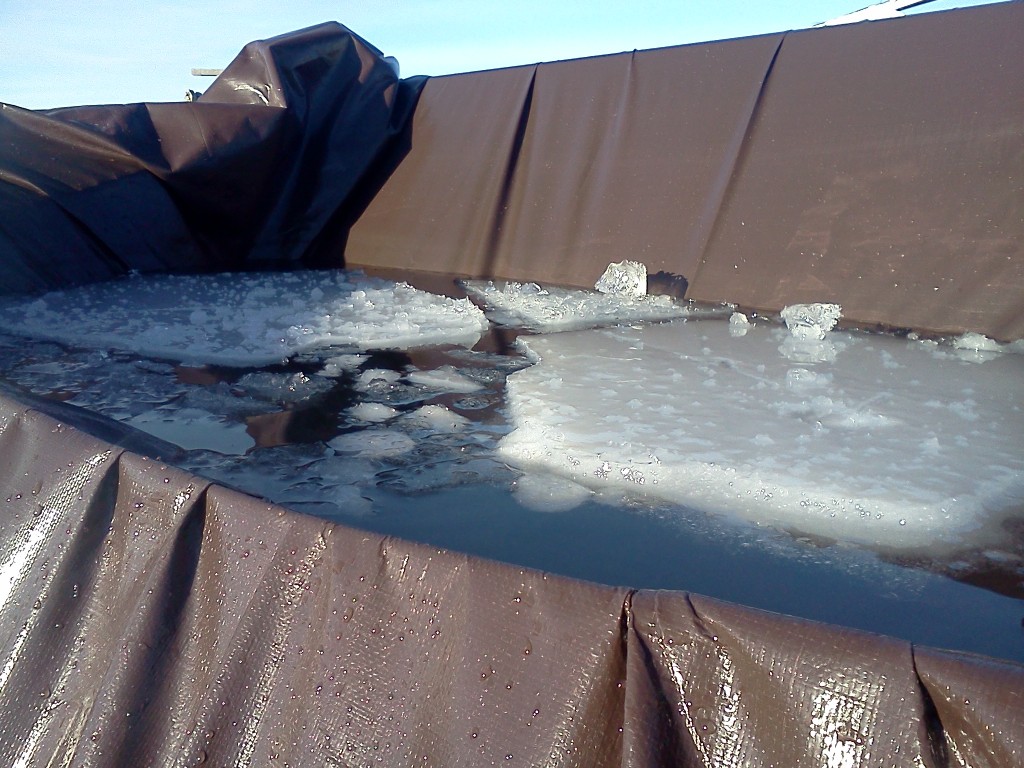 This was obnoxious, and took a couple hours.

I had initially thought that once I got the ice out I’d be able to more easily get the water out, either by pulling the cover taut or pushing up on it from the inside, but it was still hundreds of pounds and I had no leverage on it whatsoever. I tried to release the lifeline but I couldn’t get the pelican hook undone under load. I was starting to think that maybe I should just poke a hole in the bottom and let it drain into the cockpit, but then in my questionable mental state I got the brilliant idea to siphon it out.

I found a garden hose, positioned one end in the tarp pond, and took a long hard draw on the other end (I was well beyond any grossness at this point). To my surprise, this actually worked. Yay physics. The only problem was that I’d had a large coffee on the way over and forgot that the Trixie’s restroom is closed for the season. I had to stand there in the cold and hold the top of the hose over my head for a half hour while the other end gently whizzed into the muddy snow with a gurgling noise that I thought for sure was going to make me pee my pants. 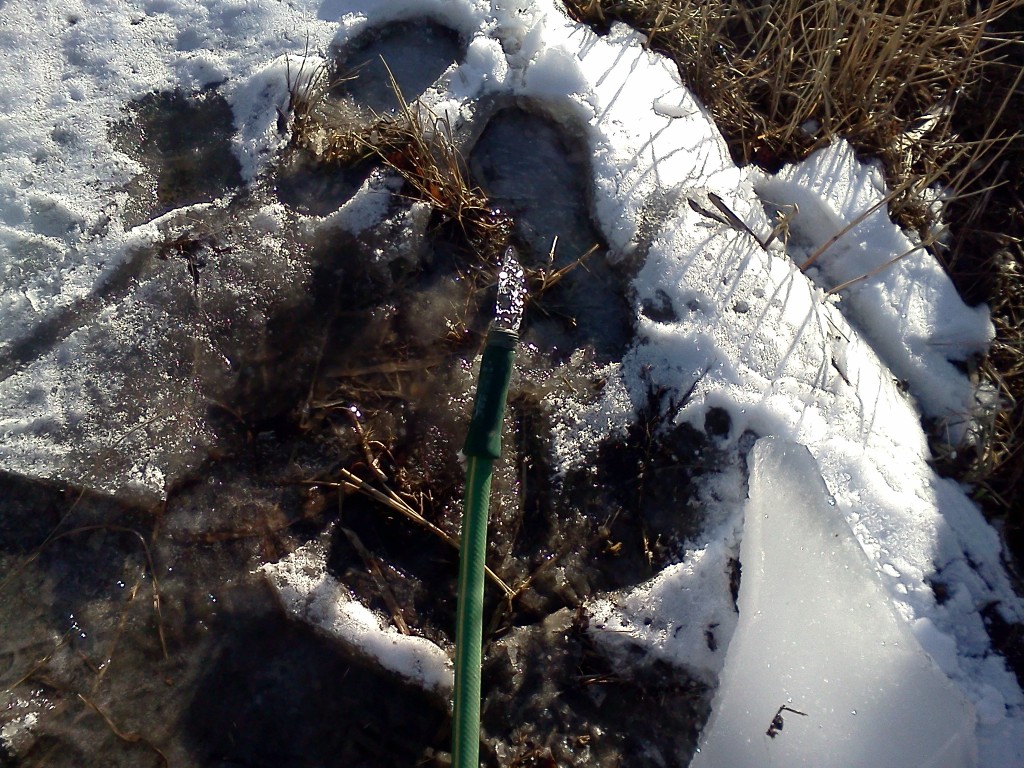 The ice was actually pretty cool. I mean, I wasn’t happy that it was there, but once I got it out, I realized that it was oddly stratified. There was a clear layer that I guess froze from puddled water, and then a snowy layer that I assume was from snow that fell on the ice, partially thawed, and had re-frozen. 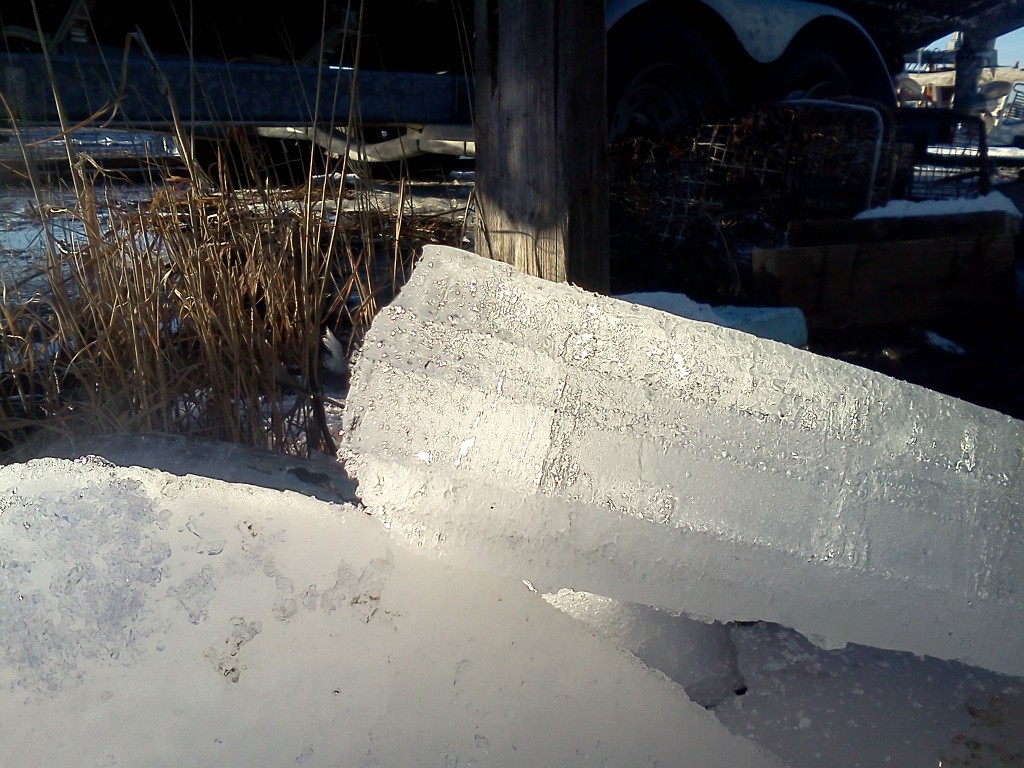 I did technically succeed. Once I had all the water out, I was unable to undo the lifeline and I re-adjusted the tarp to try to give future water a better path down. Thankfully, I had tied the tarp down with some very elegant 17 half-hitches, which were fantastic to untie when the line was wet and frozen and my hands were alternately numb and incongruously feeling like they were burning. The next time I go down, I think I’ll make a strut for the inside to give the top a peak, which is likely to work a lot better than my temporary fix.

I’m impressed that the paracord and tarp held that much weight, but I’m wondering if the stanchions are bent, or my lifeline is stretched beyond recognition, or something worse. This situation was far from ideal, but I guess it’s better that I found it now and didn’t just let it go until April.

Hopefully the marina will be ready to go in April and things will start getting back to normal. Even as repairs continue, there are still plenty of reminders of the storm. 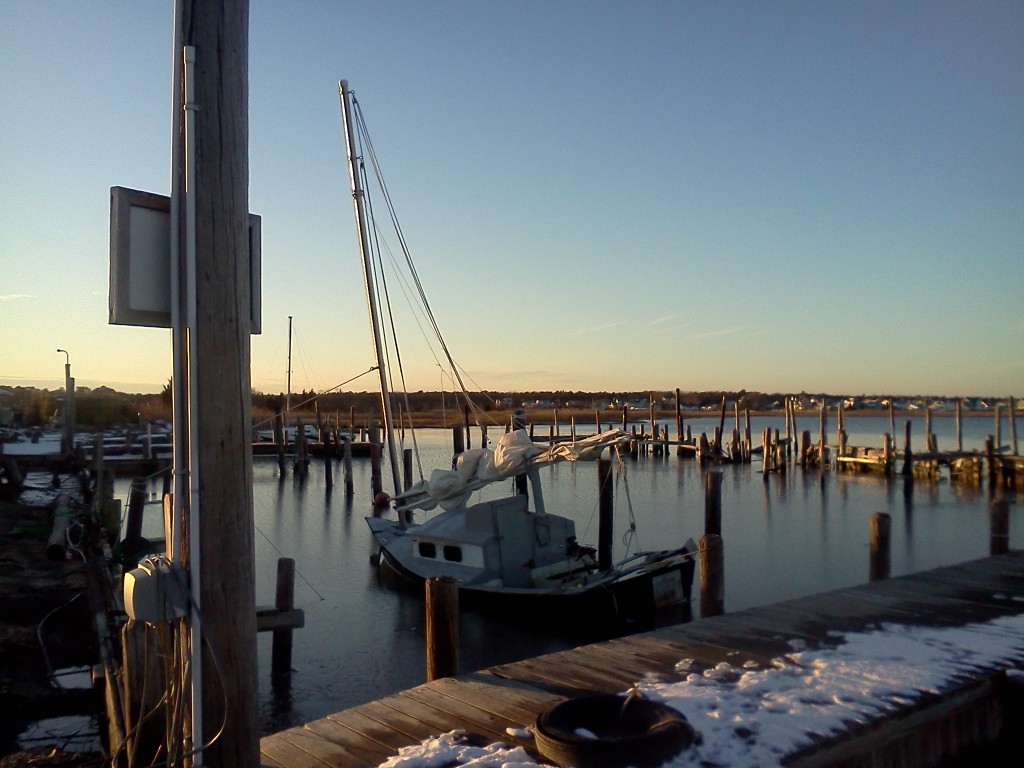