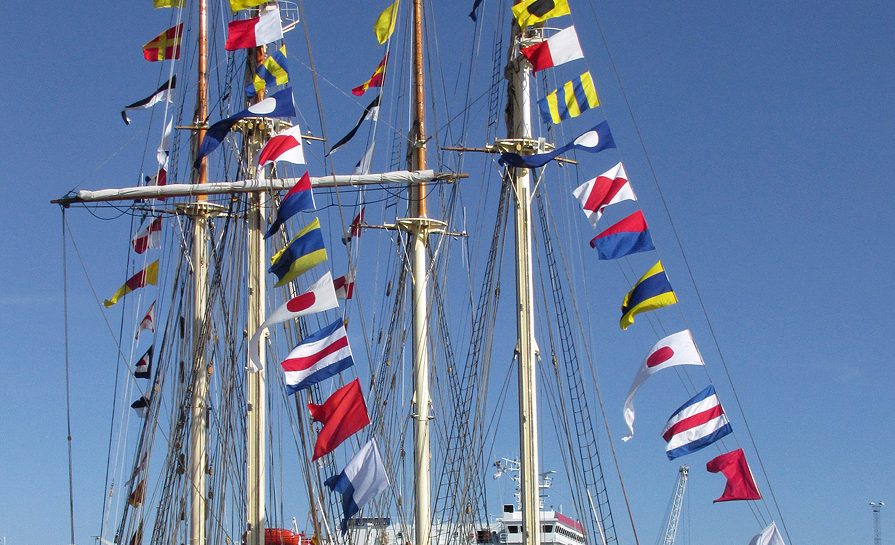 When I did the first major re-design of this site, one of the pieces of feedback that I got on the home page was that it wasn’t clear that there was more content beyond the teasers. I think the link color was even more subtle back then, and I guess people didn’t see the “…continued” and realize that they could click the links to get to the full log entries. In order to draw more attention to the links, I wanted to put a little icon in there, about the same size as the text. There are some standard doodads for this (like ◊ or ∗) but I wanted something unique, and the only thing I could think of at the time was signal flags.

Even though they’re barely understood by the average recreational boater, maritime signal flags are kind of ingrained in the boating (or maybe yachting) lifestyle. They’re everywhere: the place settings, the Tervis Tumblers, the “I’d Rather be Sailing” license plate holder, the dog collar, the saucy Whiskey Tango Foxtrot t-shirts…pretty much anything that you can get in the giftshop from any place that was ever a seaport. I thought that having a tiny set of flag icons to sprinkle throughout the site would be cool, so I made all 26 letters in 10×10 pixel signal flags.

This was actually more difficult than I thought it would be. For one thing, many of them have white on the outside, which doesn’t show up on a white background and there isn’t much space for a border. Alpha and Bravo are swallow tails, which needed to be transparent in the empty part so that they wouldn’t look weird on a background with a slight gradient. Also, 10×10 pixels is kind of a dumb size. Some have three, six, or 8 rows or columns, none of which can be evenly divided into 10. That required some creative antialiasing to imply the actual patterns. Here’s a blown up November for example: 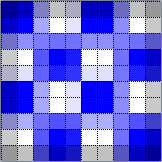 I made the original set around 2010, but I’ve learned a bunch of graphics stuff since then, and in my nautical boredom a couple weeks ago I redid the whole alphabet in a more meticulous way, resulting in a more consistent look. I thought they came out kind of cool and tried to think of something to do with them, which brings me back to JavaScript.

I’m no programmer, but between hacking up the boat log and working closely with some web developers at my day job, I know enough programmer words to be able to Google my way through some basic problems. Over the course of a few days, I was able to build a simple page using JavaScript, HTML and CSS that enables you to type in a word and then have it spelled back to you as flags:

I’m sure that you’ll have countless hours of fun and excitement seeing what the full range of profanity looks like in miniature maritime flags. Enjoy.

I’ve been looking at these flags for so long, they’re actually starting to get interesting. While each represents a letter, they also have intrinsic meanings. A common one (one of only two that I knew before embarking on this project) is the Quebec flag, which originally stood for “quarantine” and is flown when entering a foreign port to indicate that you need to clear customs, or specifically that you have no communicable diseases on board and are requesting free pratique. They almost all have a meaning, some more serious in nature than others, and there are tons more when they’re used in combination. It reminds me of those lists of anniversary gifts, where you’re supposed to get each other clocks or leather or bronze depending on how long you’ve been married. There are even traditional and modern renditions of the gift lists, as if anyone had done this in any era.

Since Sailing Fortuitous is widely known as the complete nautical reference*, I will include the full list of flag meanings here:

* Please do not use Sailing Fortuitous as a nautical reference.