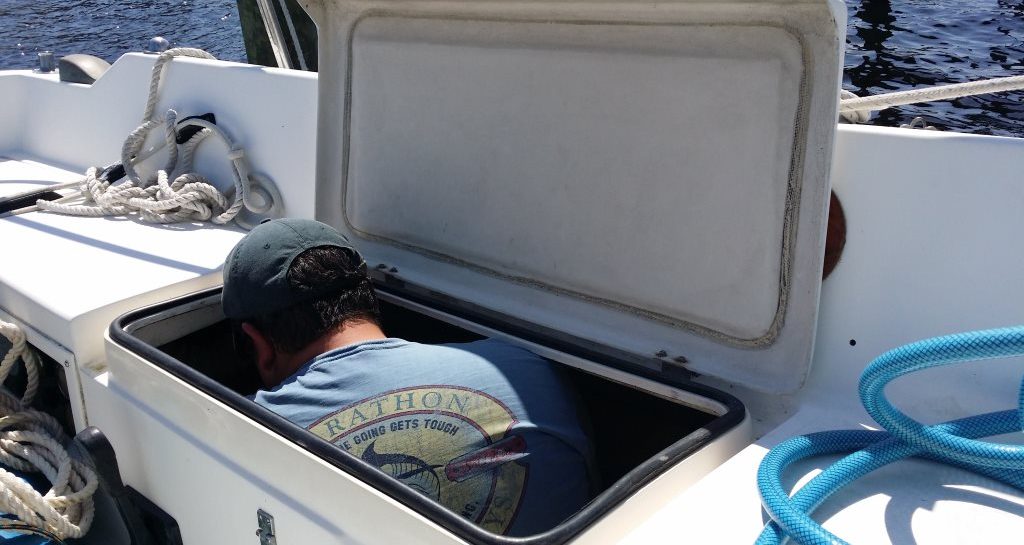 In my study of the sailing dharma, I have come to accept these noble truths:

1. Maintenance is suffering.
2. The end of suffering is more maintenance.
3. See #1.

At one point I was on the stern, hanging somewhat limply from the backstay. I said aloud “I don’t think we’re ever going to sail.”

The people on the boat a few slips down were laughing at me. I’m not sure if they knew I was on the telephone or not, but the effect was largely the same either way.

Jen was on the other end of the conversation, trying to talk me out of jumping off the transom.

Earlier that day, I’d arrived at the boat with two simple tasks: finish the boom and sew a couple slugs onto the sail. When I opened the hatch, I thought, “Hmm, how did the bilge cover get over there?” Then I immediately thought, “Oh, it floated over there because the bilge is full of water.”

It wasn’t a “sinking” amount of water. It was contained to the bilge proper, and it was our floaty oil-catching thing that had actually pushed the floorboard out, but it’s still not cool, representing two more truths:

1. Our boat is leaking.
2. Our bilge pump is not working.

I quickly started an assessment. It had not rained. All of the thru-hulls were dry. The freshwater tank and holding tank are both completely empty. The stuffing box was dryer than it probably should be. No visible leaking from anything in the engine area or parts aft. The bilge pump didn’t run at all during my investigation, but true to my somewhat liberal misunderstanding of the Heisenberg Uncertainty Principle, the mere act of examining it seemed to make it work. I assume it was actually a crappy electrical connection that I happened to wiggle into continuity. It sucked the bilge dry pretty quickly, and I continued to try to think of reasons that there would be water in the boat. I did find water in the ice box that tasted like the water in the bilge (yeah, I tasted it), and while that made zero sense as a source for the bilge water, I kind of set that aside as a plausible enough explanation to allow me try to complete something.

Adding the missing boom hardware and sewing on the new slugs weren’t terribly exciting, but I did actually do them, which was slightly refreshing. Our sail had two slugs that were not like the others and wouldn’t go past our mast gate, so I used my Speedy Stitcher and some tubular webbing to attach new ones. I tapped threads into the new boom to add cleats and got to use the marina’s Big Daddy Riveter to attach the cheek blocks for the reefing lines. I wish that I made up “Big Daddy Riveter,” but that’s actually what it’s called. 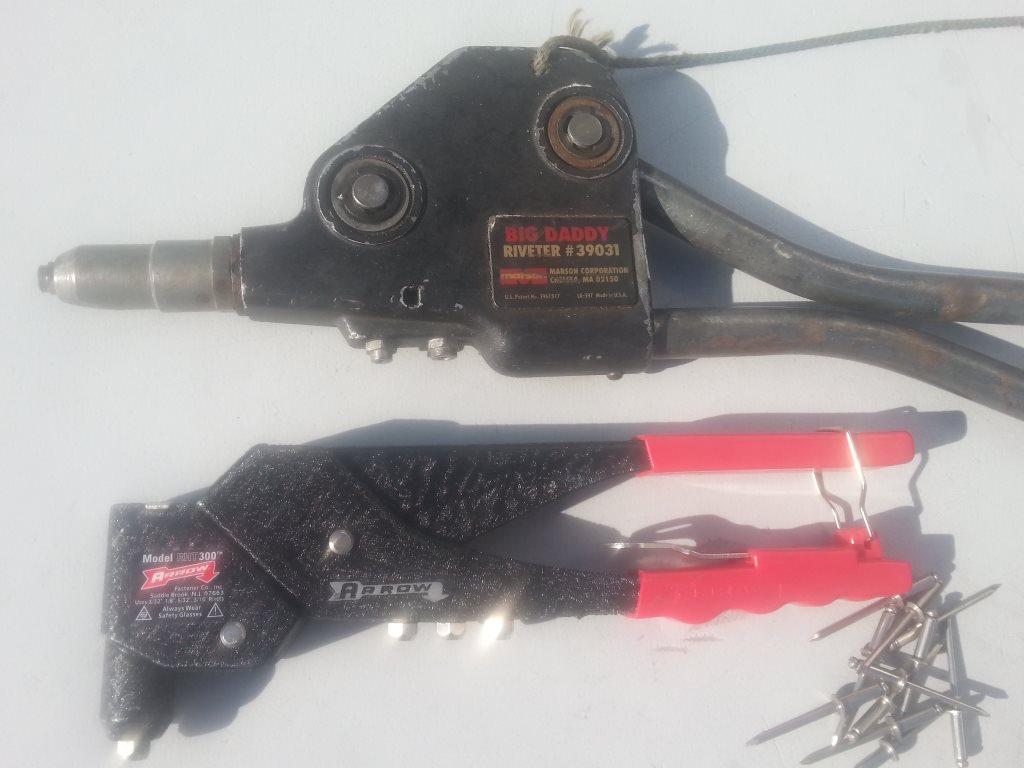 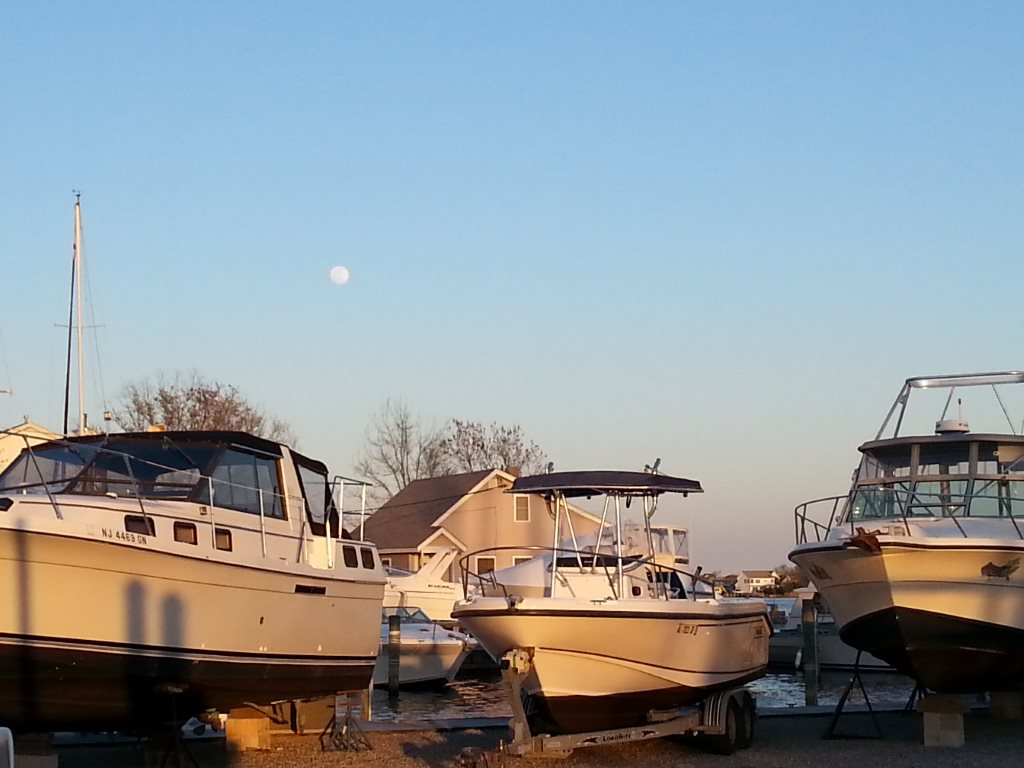 Jen went to the boat with me on Sunday with the intention of finding the leak and replacing the bilge pump. I have always hated our bilge pump—it works by turning on every two and a half minutes, and if it determines that it’s pumping water, it continues until it’s not (supposedly). I actually asked Santa Claus for a proper float switch and have been driving around with it and a normal bilge pump in my truck for months, but I had not intended on changing it out until our ratio of sailing to maintenance had started to level out. Obviously, the circumstances required that we accelerate that timeline.

We went to the boat store for wire, an on/off/auto switch (our current pump has no switch, which is also annoying), and the final odds and ends needed to replace and re-wire the pump. We were assisted by a kindly sea captain with an un-ironic but nevertheless intense mustachio. Still suffering somewhat from nautical phantom limb syndrome, we determined that the manual bilge pump that was on our 22 is not in the congruent location on the 27, so we stopped at a second marine store for a Beckson Thirsty-Mate.

We then attempted to completely re-route the plumbing from the bilge to the thru-hull on the transom. There are apparently several thousand miles of hoses, conduit, and decoy fixtures on our boat, mostly in places inaccessible to humans. We first removed the hideous and disgusting corrugated bilge hose and the old pump. Through much mutual creeping and crawling, Jen and I managed to run fresh new smooth-bore bilge hose through most of the bulkheads and compartments. The skipper of Arpeggio wandered by while we were in the process and started talking to Jen. I chimed in, and he asked, “Chip? Where are you?” He was apparently not expecting me to be hiding in the port cockpit locker like a deranged jack-in-the-box.

We got the hose routed all the way to where it has to go through a hole under the engine to pass beneath the cabin sole to the bilge. It turned out that somewhere deep in that level of hell, the passage narrowed, and would not allow the 1.125″ hose to go where the 0.75″ hose had been. It seemed pretty close and, like Xerxes at Thermopylae, I thought I could just force my way through. It didn’t happen. With no visual reference of what was going on in there, I imagined that if I could just somehow lubricate the hose, I could get it to squeeze past.

Shortly thereafter, Jen and I found ourselves in a pharmacy, haggard and filthy, walking up to the poor innocent girl at the counter with a tube of generic Astroglide and a bottle of iced tea. I blurted out, “This is for our boat,” which probably only made the situation more uncomfortable. I then tried to explain how we had a length of hose and simply needed a water-based lubricant, which trailed off into whispered muttering as Jen choked back chirps and snorts of laughter.

This would have been an awesome story if it worked, but you know how this ends. The history of bad ideas is slathered in personal lubricant.

I had jammed the hose in there so tightly that I could neither get it through to the bilge nor back out. It was so stuck that I considered using a block and tackle to try to remove it. I then considered asking for help. That disturbed my latent sense of manliness, so I gripped it tightly with both hands, took a deep breath, and gave it everything that I had…

…and when it broke loose, I fired my left hand into the engine as hard as I possibly could. According to Jen (and in keeping with my usual form of saying ridiculous things in moments of panic) I said, “Oh Jen, that’s an engine I just punched.” It was that sort of thing where you have a moment to ponder “what have I just done?” before the pain actually sets in. I seriously thought I might have broken my hand.

We were running out of daylight, and we couldn’t leave the boat with an unknown leak and no bilge pump, so we made the depressing decision to re-install the old stupid pump with the disgusting 3/4″ hose and new wiring.

Hopefully, my hand will heal by next weekend and we can continue the quest for sailing nirvana.