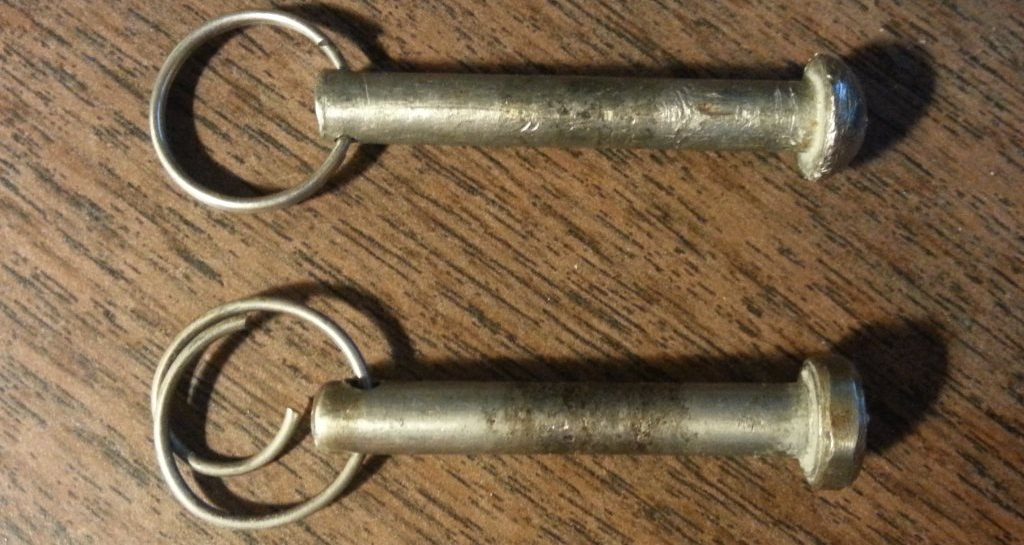 This is barely worth writing down, but in the interest of completeness, I guess we technically operated the boat.

Our mast was finally stepped and I was ready to sail, but there are still so many things to do. I keep ticking off tasks in my head as “about 90% done,” which is both mathematically incorrect and still falls under “incomplete.” Even the easy stuff is difficult. Take, for example, the Goldilocks Pin, which is supposed to attach the tack of our sail to the boom.

One of the above pins is too short. The other is too wide…even though by non-aerospace standards THESE ARE THE SAME PIN. Of course, we can’t seem to source the “just right” pin locally, so thank Poseidon for Amazon Prime…otherwise the shipping would far exceed the cost of the item.

Nothing was going right and I was pretty cranky, but I was able to (at least temporarily) lash everything together with a ramshackle array of stray rope and whipping twine. We were still at the work dock and needed to move Fortuitous to her slip. I hate running the engine for just a couple minutes, so I convinced Jen to go for a short cruise up the creek to top off the fuel tank, add more fuel treatment, and let the motor reach operating temperature.

My ulterior motive was to re-acquaint myself with handling the boat. I don’t know what this is all about, but the thought of close-quarters maneuvering immediately after a long winter layoff was notably unappealing. Logically, I understand that I probably didn’t forget how to use a tiller and throttle, but I have a strong sense that swagger is a significant part of coercing a boat into a slip, and I wasn’t feeling it.

The obvious problem with this plan was that instead of docking in our slip, where I’ve docked lots of times, I’d instead have to pull into the fuel dock at Lanoka Harbor, where I have never been. Additionally, the engine didn’t sound right, wouldn’t maintain RPMs, and stalled at one point [perhaps the instructions about filling the fuel filter with diesel and bleeding the system after changing it were legit]. Between that and the large, expensive looking sportfisher at the fuel dock, I decided to wave-off and try to figure out what was up with the engine and allow the sportfisher time to leave. Jen got the anchor ready just in case.

During this time, we also tried to re-furl the jib, since we didn’t get a very tight roll when we bent on the sail. I was excited to see how it would work with the retainer in place to keep the jib halyard from wrapping around the forestay, but it immediately got tangled with the spinnaker halyard—taking us back to that old familiar territory of neither being able to fully deploy or retrieve the sail. I headed for open water.

Jen made an acrobatic attempt at untangling the lines at the masthead by walking the working end of the spin halyard around the sail, but we soon decided to pull the spin halyard through. That was depressing, since we just installed it, but we had to get the jib under control. We’ll figure some way to get it back up there (possibly with a bail or something to move the crane farther forward).

We then turned around and headed back toward the gas dock. The sportfisher was still there, but we docked anyway, without issue—only to find that they were not yet open for the season. We could have used a sign larger than the Post-it note that they’d left on the pump, but whatever. It made pulling into our slip seem appropriately commonplace.

Although the to-do list is infinite, the must-do list is slowing getting shorter. We just need to wrap up a few things, get them to an actual state of completion, and then I think our ratio of maintenance to sailing might start to improve.