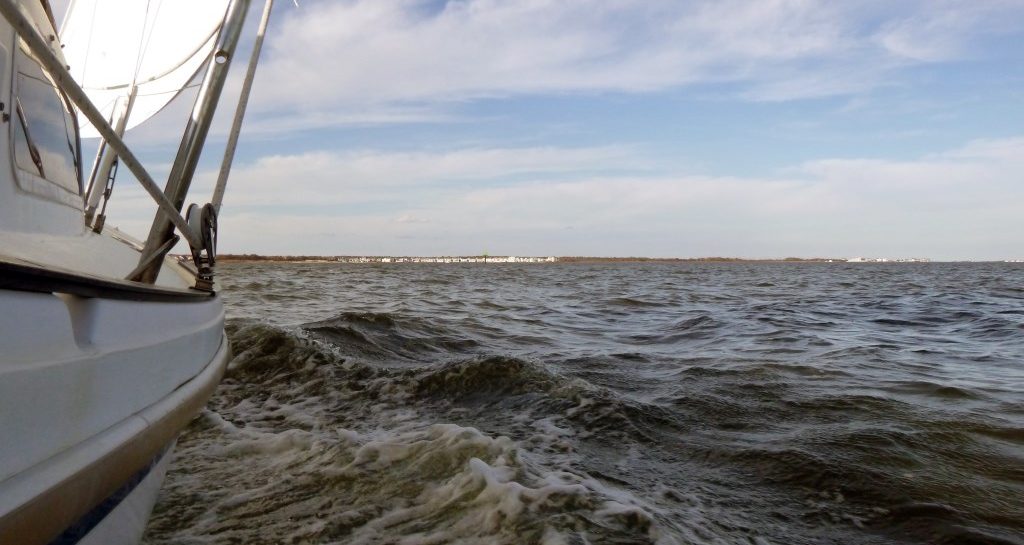 On the last day before we moved the clocks back an hour, I attempted to save as much daylight as possible for a solo sail around the bay.

I’ve singlehanded this boat a few times, although for whatever reason, it’s always been an impulsive decision and not something I had originally set out to do. This time, it would be deliberate, which has its own set of consequences.

On the drive to the shore, I was mentally working through how this would all work. The sailing part doesn’t bother me, but some parts of the sailing experience are just better done with two people, like putting the sails up, taking the sails down, and in particular, docking operations. I kept imagining contingency plans for when I get the boat stuck in the slip 90° off of optimal, or when the autopilot runs me aground with the sail stuck half way up.

When I arrived at the marina, it seemed a little windy. The forecast called for gusts up to 20, building toward when I’d be returning to the dock, so after I opened up the boat, I took a walk around the marina just to clear my head. I ran into Richard, who sails Mystique predominantly singlehanded, and he convinced me that none of this was a big deal. He said something like, “You’ll definitely run into something when you dock, but that’s why you have a rubrail.” So I prepped the boat as best as I could at the dock, put in a single reef, and warped myself backwards out of the slip.

The wind was westerly, and I didn’t want to attempt to raise the main downwind, so I spun around in the mouth of the creek and raised it there before running into Berkeley Island Park. I then came about and noticed Boadicea to the east. They had been ahead of me as I exited the creek, but kept motoring across the bay. It appeared that they had tried to raise their mainsail, but it was flogging endlessly. I decided to sail over on just the main and see if they were ok. As I approached, they got it down and deployed their jib. I got within shouting distance and asked if they were ok, and they said they were fine, so I popped my jib and shot away from them with satisfying speed. 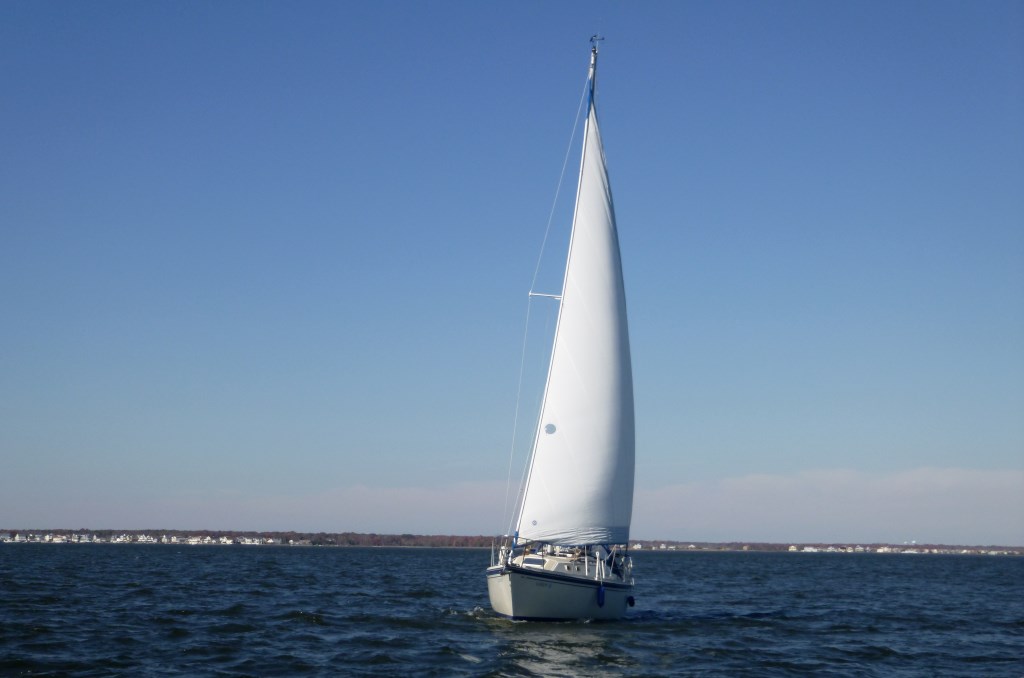 While I was checking on Boadicea, Mystique (this time with crew) had reached the bay and was sailing south. They were just ahead of me and further inland, but I decided to sail along with them for a while. The wind was just about perfect for a beam reach down the bay—just barely close reaching when headed south. To maximize speed when reaching, it’s often better to steer straight and trim the sails to the puffs and lulls, so I set up my auto pilot and focused on trimming. The autopilot never seems to be as precise as I want him to be when sailing on the inside though, and Mystique was staying ahead of me as we meandered around. The bay was nearly empty, so at least we weren’t freaking out the speedboats with our lack of distinct course, but I wasn’t happy with my boat speed. I switched to steering by foot while trimming and slowly chewed away the distance between us.

They tacked short of BI, and I thought maybe I was stressing them out on a day that was not about stress, so I kept going. I sailed to BI, then came about. 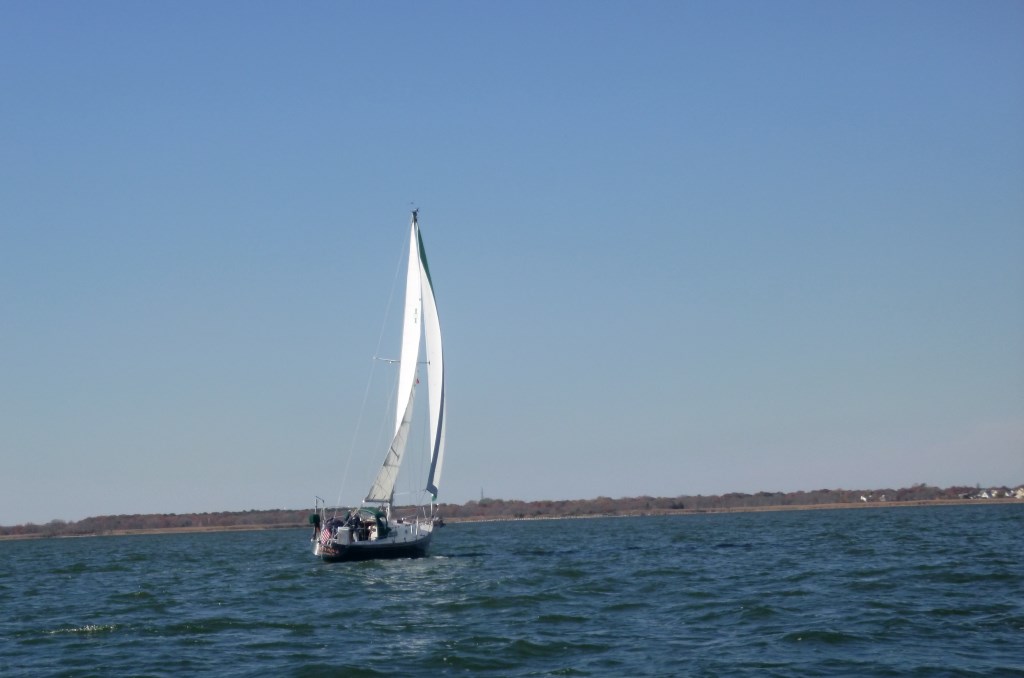 Now out of sight of other boats, I could experience a more complete sense of being alone. I set up the autopilot again, and he seemed to prefer this point of sail. I wandered around the boat, made a drink, and took some time to try to just live in the moment. 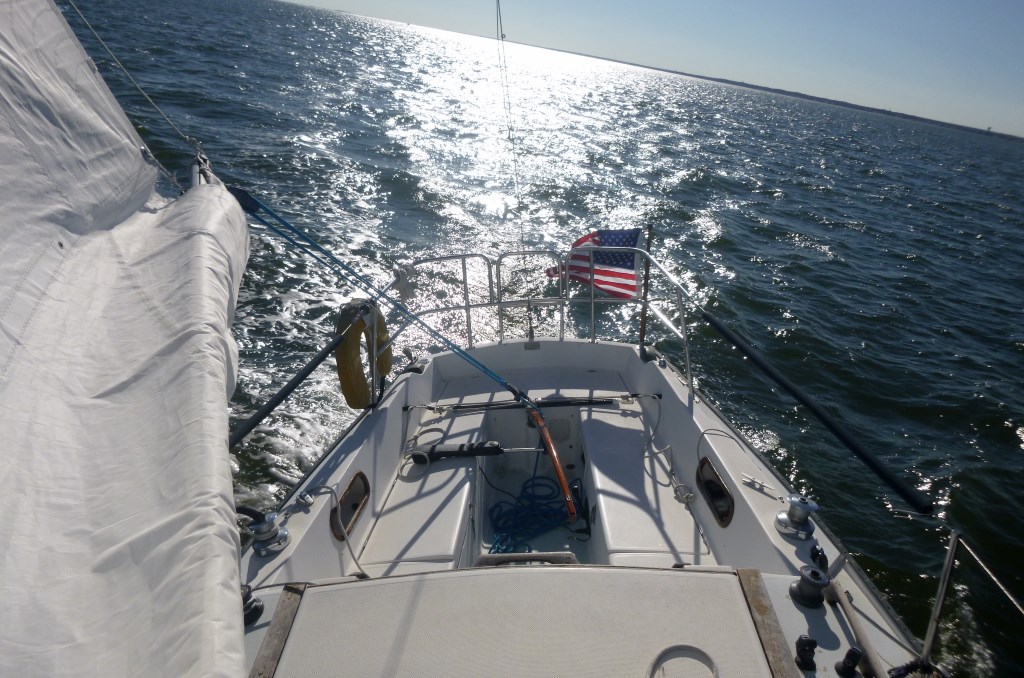 At 40, I had to turn slightly to continue following the bay, and resumed manual steering, now slightly more upwind. I sailed all the way down to 38, then made the turn to go around Good Luck Point. 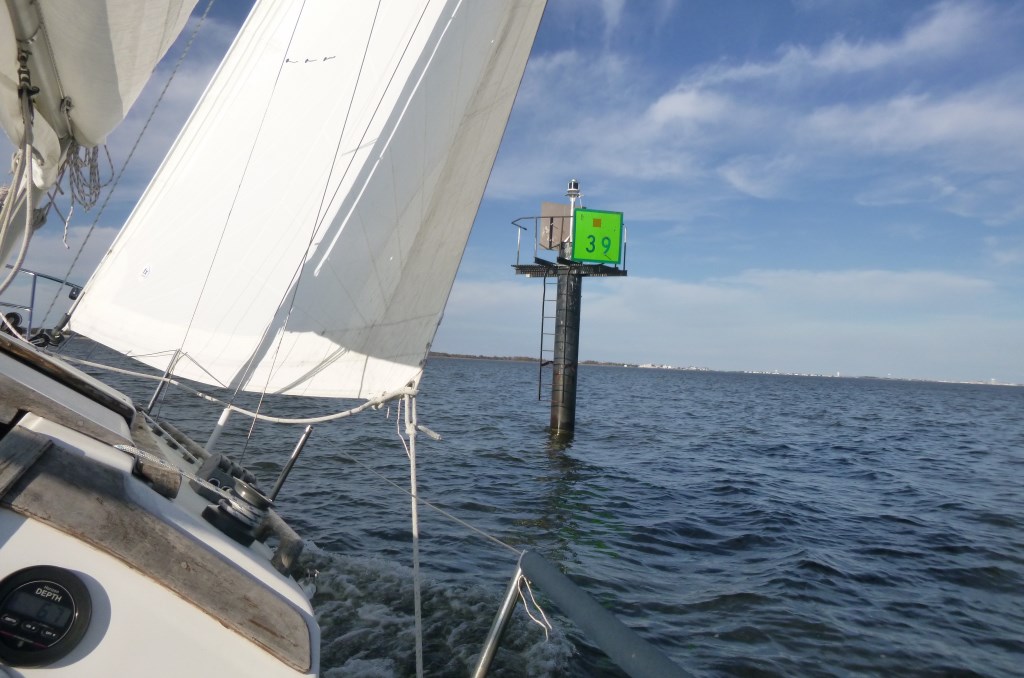 The mooring balls at Martell’s are gone for the season, and the tiki bar was empty. It was cool—probably too cool for people to be outside even with those weird outdoor heating things—but I was properly dressed in my fast pants and Filson Jac-Shirt and didn’t notice much. 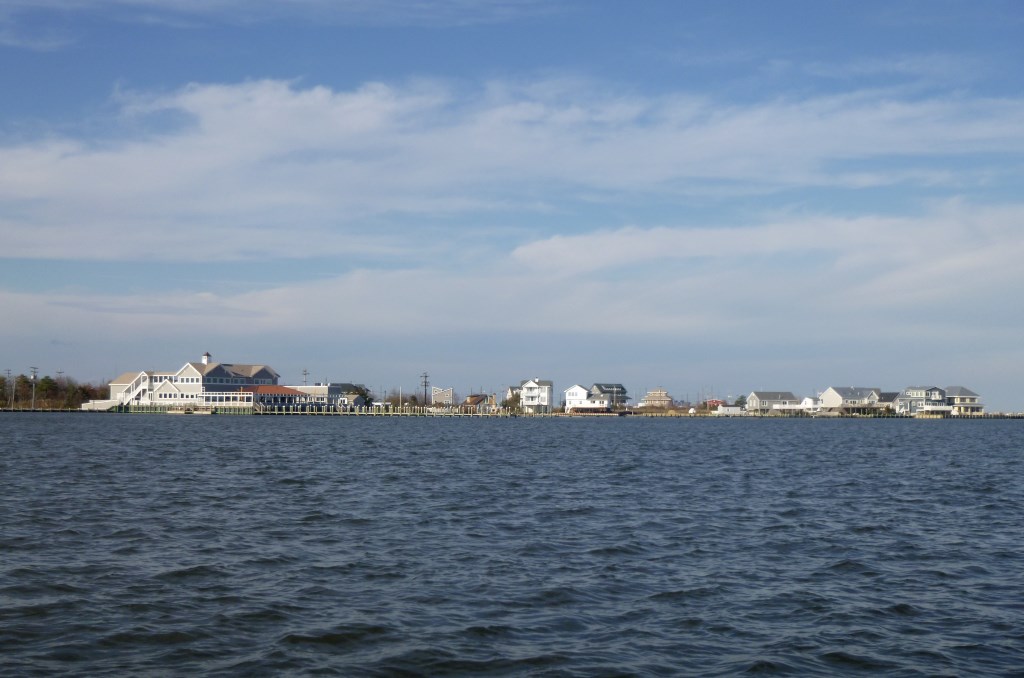 As I came around Good Luck Point and saw the old High Seas Radiotelephone Station, I finally noticed that the sun was going down. I had forgotten my watch, along with any sense of time, but decided that I should probably turn back. I could have sailed on forever.

Docking was a complete non-issue. I don’t know how much of that was the protection of marina or how much was the serenity that comes from a long day alone on the water. Or the serenity of knowing that I would have passed Mystique if given enough daylight.