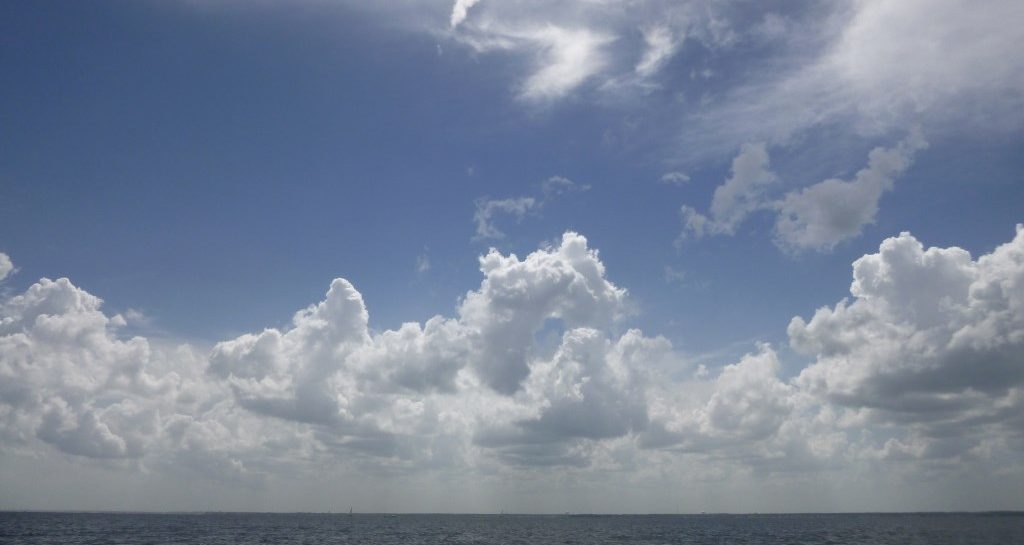 We’d been away from the boat for a couple weeks and were excited to get back in the swing. We skipped sailing last weekend and celebrated our nation’s independence by crossing its porous border into The Great White North, hoping to avoid high temperatures, thunderstorms, and idiot boaters. As it turned out, it was still hot in Montréal and the idiots waited patiently for us in New Jersey.

We started off trudging slowly north under full sails in an almost nonexistent westerly wind. It switched around to the south, and running on a very broad reach I didn’t realize that the speed had also picked up quite a bit. When we came about near marker 38 we were slightly overcanvassed—the wind meter at Trixie’s recorded gusts to 18 during that time—so we shortened the jib and began backtracking toward Governor’s. It was already in the low 90s, and we were looking forward to a swim and to try out our new homemade anchor riding sail. 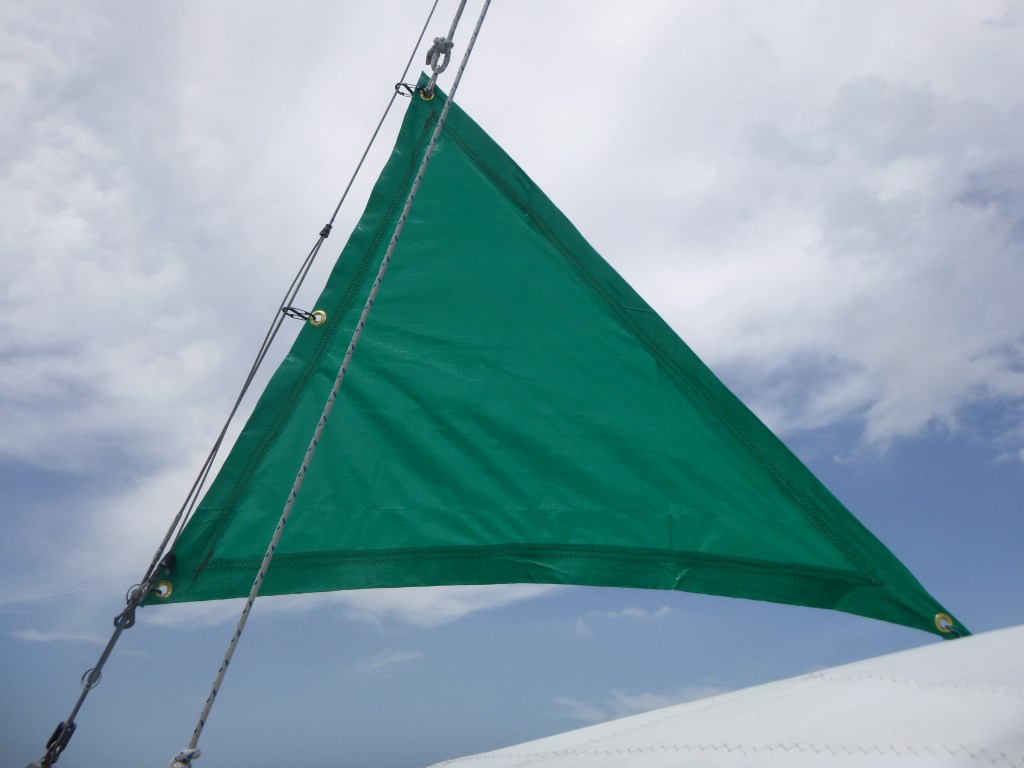 I’m not sure that I believe in unmitigated successes, but man, that little sail worked. I clipped the tack to some of the apparatus for my adjustable backstay, used the main halyard to hoist it, and tied the clew down with some cheeseball paracord that I happened to have on hand. I initially had it tied to a cabintop winch, but it didn’t seem like it was outboard enough and I wound up running it through a stanchion base and leading it back to the port jib sheet cleat. One might imagine that a riding sail should be set on the centerline of the boat, to work like the fletching of an arrow, but everything that I’ve read says that you need to actually sail it like a jib and present some angle of attack to the wind, which worked great for us. I’ve got to lose this paracord…it stretches like crazy under very light loads, although I don’t think the trim is critical. The sail was silent (it didn’t luff even at max swing) and in about 10 or 12kts of wind, we pretty much stayed put. 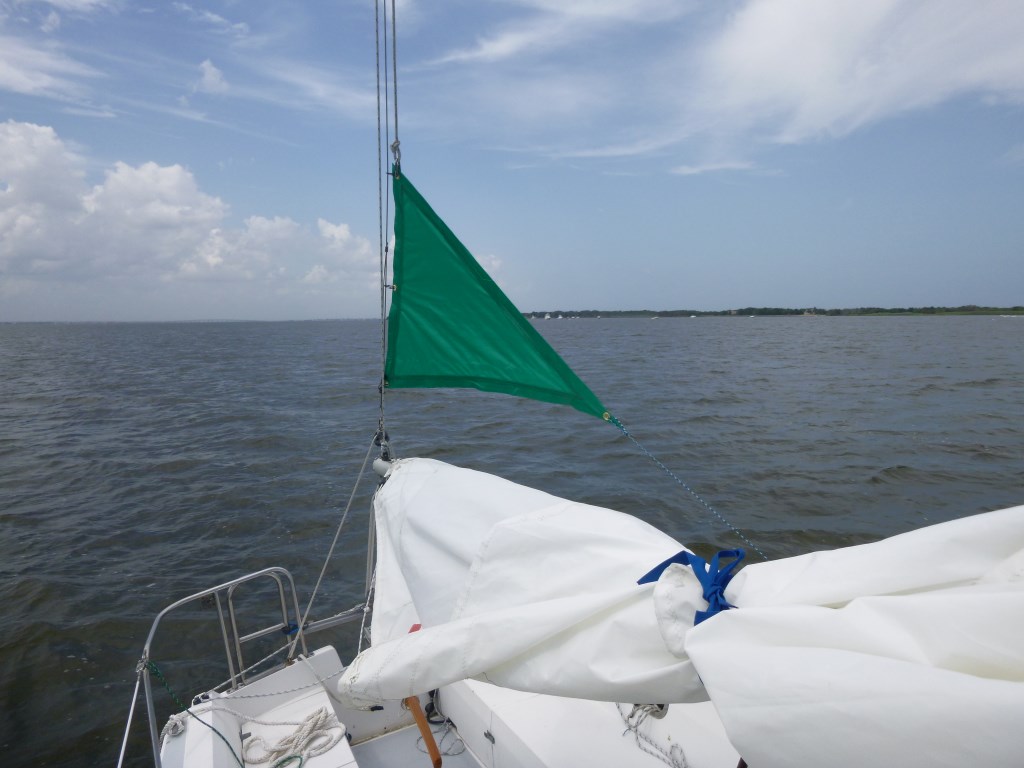 I don’t have a great way to measure the difference, but we were visibly more stable than usual and the boat’s compass (which I realize indicates our heading and not how far to the side we’ve moved) didn’t register anything outside of a 30° range. I would guess that the boat’s heading usually moves through close to 90°, or at least it feels that way. I briefly considered doing a control experiment with the sail down in similar conditions, but the thought of swimming was far more appealing than the pursuit of objective scientific measurement, so we jumped in the water instead.

The bay was ridiculously warm, to the point of it not being as refreshing as I’d hoped. We didn’t stay in for long, and returned to the boat for lunch and napping. I was awakened when the VHF sparked to life with a single, articulate profanity. This woke up the entire bay, and soon the airwaves were flooded with every manner of schoolyard taunt. This is both annoying and unsafe, blocking potentially critical radio traffic. Many countries require training and licensing to operate a marine VHF radio, but in God’s United States of America, you’re free to be stupid. It wasn’t quite The War of the Worlds, but I’ll attempt to bring you this radio drama as told by our old pals Fuzzy Bunny and Mr. Frog: 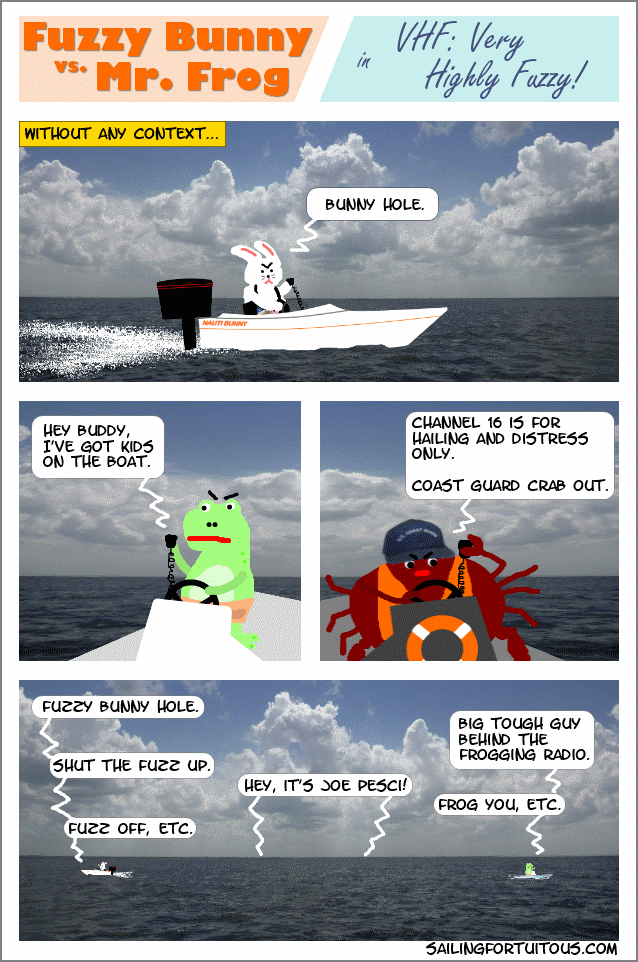 I’m sure that the FCC levied large fines, that justice was served, and that everyone learned something valuable in the process.

On that note, we took down the riding sail and made preparations to head back. While sailing a beam reach on just the jib, I saw something floating in the water and we trimmed to intercept. It turned out to be a little inflatable tube…a pool toy (fortunately without a kid in it, since we were way out in the middle of the bay with no boats around). It was too far upwind for us to get to it, but then I noticed more of them floating a little further off. Since the bay already has enough plastic in it, and to practice our boat handling and man overboard skills, we decided to turn back and capture them. Jen was on the hook, Deadliest Catch-style, and snagged each of them on the first try. 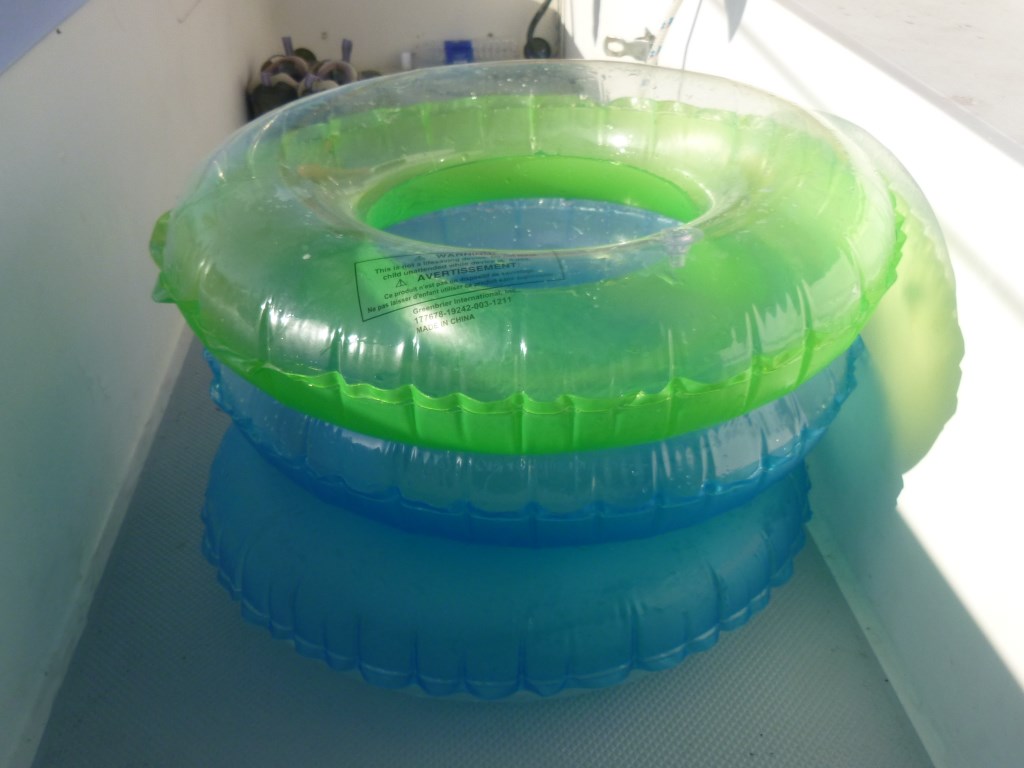 We donated them to the marina. I’m sure that they’ll be able to find some kids for them and maybe they won’t wind up in the marshes.

Yet another interesting day on the bay. You never know what you’re going to run into out there. I’m really excited (and frankly, surprised) that the riding sail works, considering how much smaller it turned out than originally planned. Seeing it in action, I’m not sure if going larger would be much better. I imagine that there’s a size where it would start to become a liability. We’ll continue to test it in different conditions to see how it does, but I have no immediate plans to fire up the sewing machine.

May all of your Fuzzy Bunnies maintain radio silence.