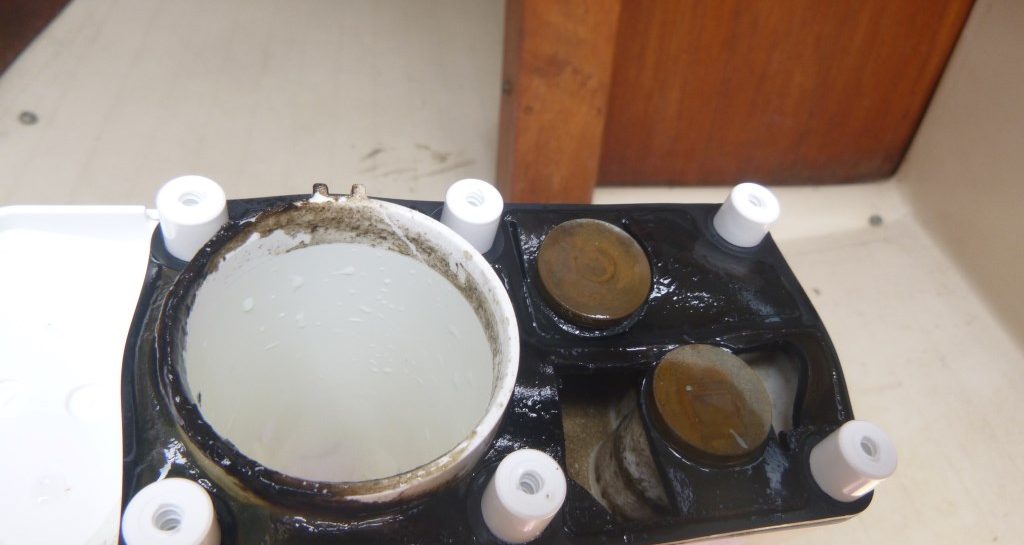 I suppose that there comes a time in every boater’s life when it is time to go head to head with the mysterious contraption that is the marine toilet…and wish that you just used a cedar bucket like a civilized person.

Before this expedition, I wasn’t exactly sure how a head even worked. For its typical use, we just made our best interpretation of the emoji on the pump housing and did things until the desired results were achieved. Over time, however, it apparently became haunted, performing dark rituals while we were away from the boat to conjure back the departed.

I did know of exactly one marine head term: the hilariously named “joker valve.” 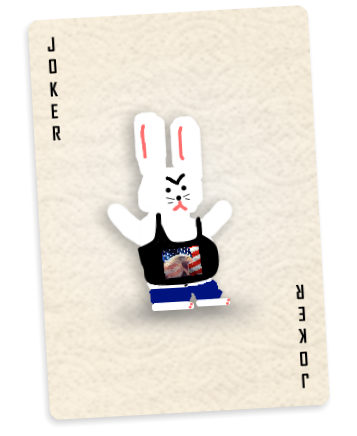 After some Googling, it seemed as likely a candidate as anything. I decided to go with a complete overhaul kit, since I wanted to be thorough—I had no intention of setting up a regular play date with the internal workings of our head. In addition to the joker valve, the kit came with some O-rings, a couple screws, and a bunch of weird flappy parts, some with metal disks riveted to them. The instructions didn’t seem to precisely line up with the parts that I had, but it did have an exploded diagram (“exploded” being the last thing you want to contemplate when disassembling a head) and I figured that it would make sense once I got in there.

I arrived at the boat early on Saturday morning. I opened the hatches and set up a box fan in the companionway, since it was humid, probably over 90ºF in the cabin, and already smelled like an eviscerated sanitary system. I emptied my overhaul kit and spread out the parts. I got out my tool bag and, with Norm Abram-like solemnity, arranged a few tools that I thought might be necessary. I took a long, hard look at the porcelain goddess, glanced over at my latex gloves, and realized that I needed to be drunk for this.

The first beer went down quickly and I immediately chambered another in a koozie, thinking that a walkabout might invigorate the intoxication process. I briefly thought that someone might question why I was drinking at that hour, but then remembered that I was among kindred spirits. And speaking of spirits, I even got to sample a fellow sailor’s Jefferson’s Ocean bourbon, which is aged at sea. I can’t speak to the intricacies of the slosh-aging process, but I can attest to its 90 proof-ness. I then returned to Fortuitous, well-braced.

Upon initial disassembly, it was amazing to me that a marine head could ever work. 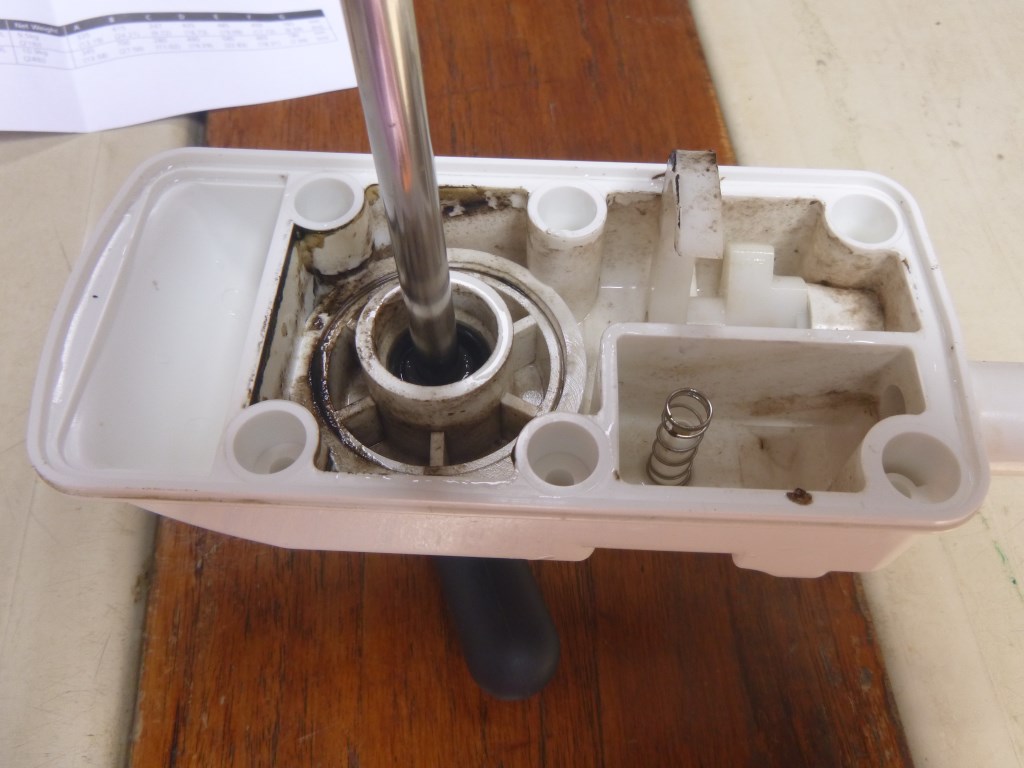 The weird weighted flaps, aided by (I assume) gravity and the pressure of a pen spring seem to be what control the “add water” functionality. When disengaged, the lower unit takes over for “flush” mode. When I got the output hose off, the purpose of the joker valve (and the reason that ours wasn’t working) became astoundingly clear. 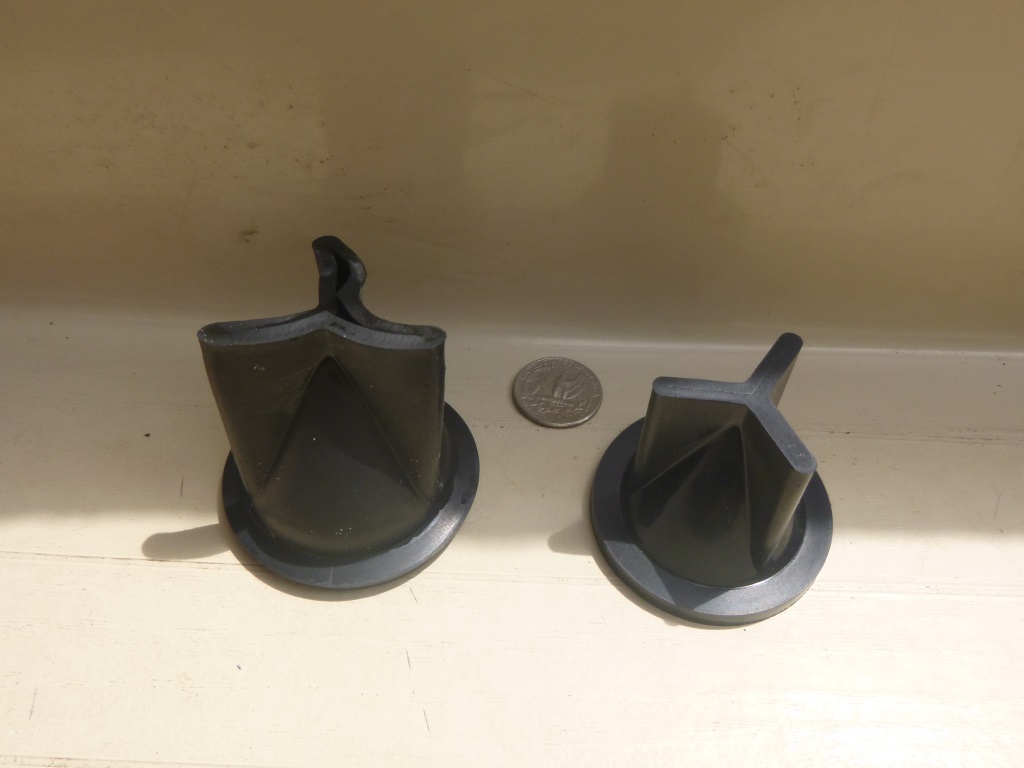 IT WAS THE WRONG SIZE JOKER VALVE FOR THIS HEAD.

The valve fits into a hard plastic elbow, and ours was about an inch too long. When it got jammed halfway into the curve, the fins were pinched, holding them open and rendering the valve useless. It is astonishing that someone tried to put that valve in, saw that it obviously didn’t fit, and then somehow arrived at, “Eh, screw it. What could go wrong?” Well I’ll tell you, Blaise Pascal: your pee-pee comes back for an encore.

Fortunately, I did remember to bring the dollhouse-sized container of petroleum jelly that Jen had picked up for me for just such an occasion. 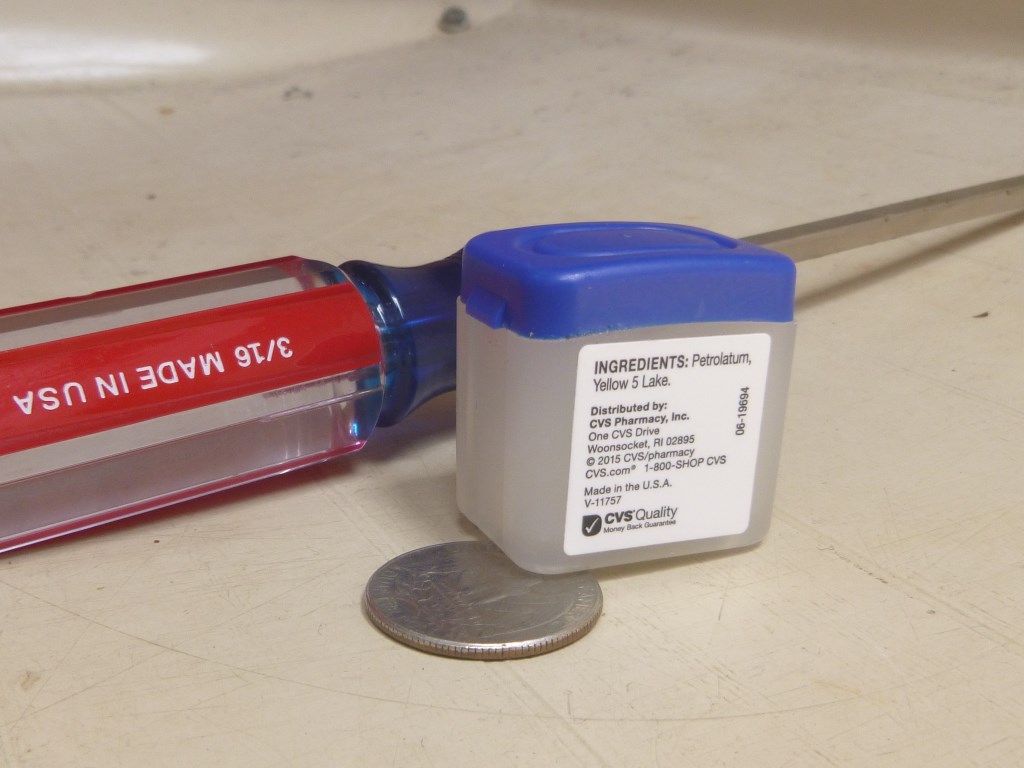 I eventually got it all back together, and it seemed to be working. Time will tell. I then disinfected the whole head and cabin sole to the point where my face was numb from the Lysol fumes.

While I was rejoicing on the foredeck, the crew of Tiki arrived at the marina. Adam had been having problems with clogged fuel filters, and was planning on vacuuming his fuel tank. Since I was already sweaty, filthy, and unable to drive, I dropped by with an empty five gallon jerrycan and my fan. Neither of us had ever really taken a close look at the inside of a diesel tank, but there were striations of sediment on the bottom, which he proceeded to meticulously suck out through the fuel gauge sender hole with a kerosene pump that looked like a cross between a Beckson Thirsty-Mate and a turkey baster. In total, we got all seven remaining gallons of diesel out and then Adam scoured the inside of the tank with a rag on a stick. We then put in a little clean diesel and drew out the remaining detritus. He should be able to polish the fouled fuel with a Mr. Funnel and be back in business.

Finally, I returned to Fortuitous and did one last rig tuning, now that I have a Loos Gauge large enough to measure my upper shrouds and backstay. I had previously eyeballed it and done some minor on-water adjustments, but hadn’t yet pinned it, so I took some readings to make sure that I wasn’t wildly out of spec and clipped in some ring dings. 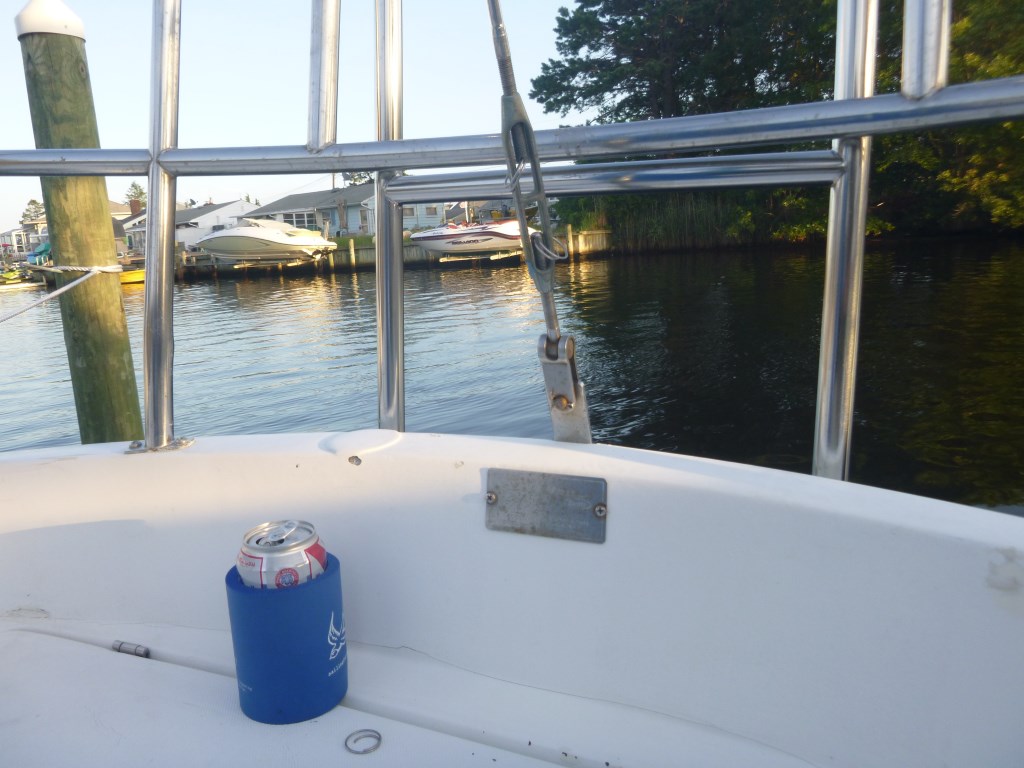 The crew of Stormy Petrel invited me over for burgers, so I stopped by after a surgical-style hand washing. I’m still not quite used to the generosity of sailors, but it’s always a welcomed surprise. It turned out to be a nice day at the marina despite being elbow deep in head problems with no actual sailing. 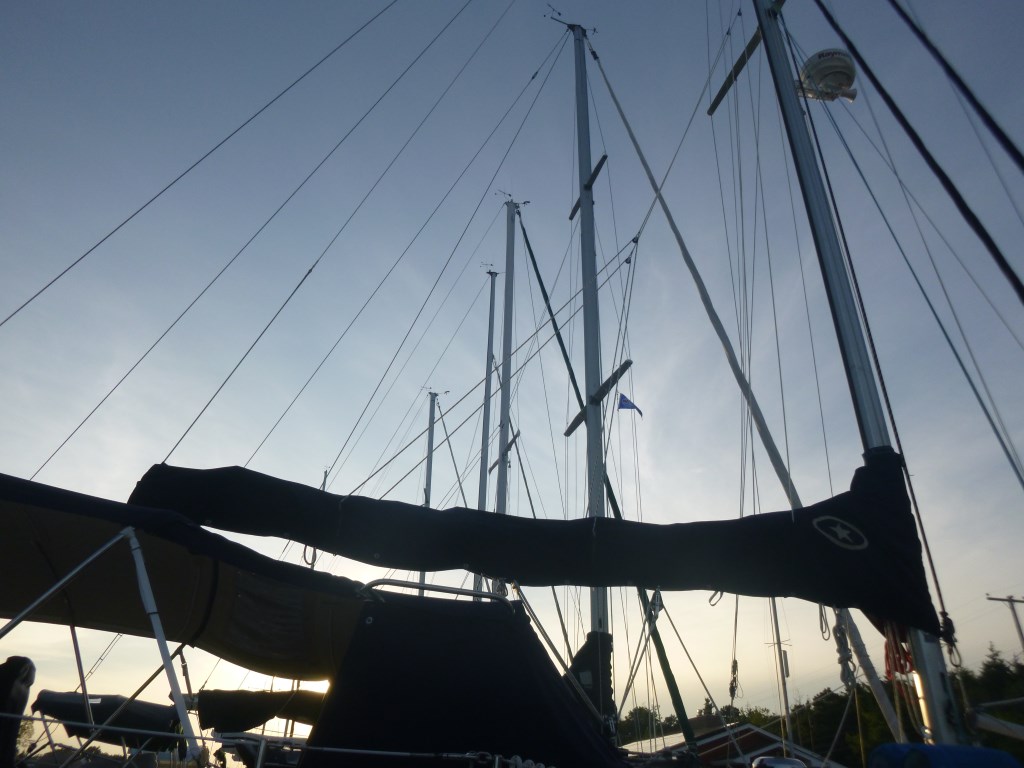 One of the major draws of a larger boat for us was the prospect of a marine head, and as potentially unpleasant as the maintenance might be at times, I did expect this sort of thing and I’m glad that I now understand the system better. I feel like sailing enforces a certain level of personal responsibility. For most of us, things like electricity, fresh water, and sanitation are so cheap and ubiquitous that they barely require consideration, but that’s not the case on a boat, and I don’t think there’s any downside to being more aware of your individual stake.