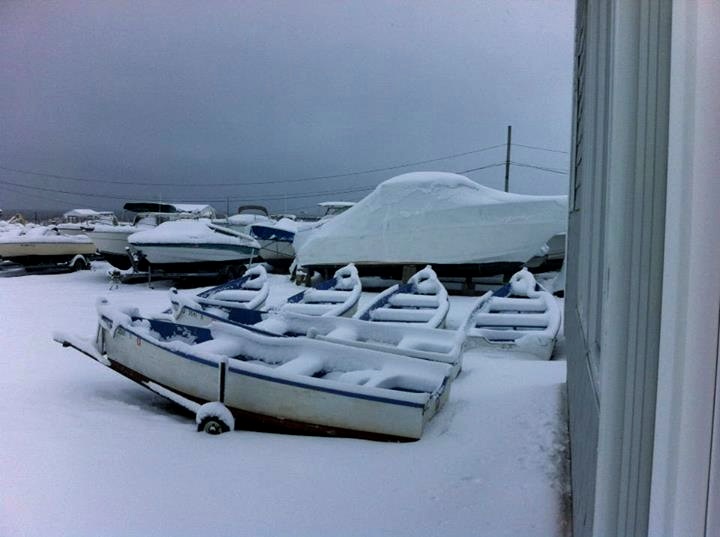 I guess we picked the right time to put the boat away for the season.

The above photo was the scene at the marina on Sunday, and I’m not even sure that this was taken at the full depth. My extended network of weather weirdos was reporting 8 inches of snow at Island Beach State Park, just across the bay.

I was there about 24 hours earlier, tidying up the last odds and ends of our winterization effort. Considering my track record with weather bearing down, it went unusually smoothly, which was more than a little disconcerting.

All I had to do was get the motor off and put in the stick that holds up the witch’s hat in the cover. When you put a cover across the cockpit and it rains or snows, no matter how taut you think you have it, rain will collect in it. Last year, when we just used a tarp tented over the boom instead of our real cover, we collected so much water and ice that it broke off our stanchions. This year we’ve got the mast up, so we’re back to the properly designed cover, which goes around the stanchions and has a built-in cone to make sure that precipitation is properly shed. We just forgot the rod that props it up when we put the cover on after sailing last week.

A little rain water had collected, but I came prepared this time with a hand pump to get it out. To my surprise, this cheapo pump can also act as a siphon, so it only took a couple pumps to get it started and then gravity did the rest. While it drained, I worked on the motor. We lock our motor to the boat, but the keyhole on the padlock became so corroded that we couldn’t get the key in it last weekend. I had a Dremel with a cutoff wheel on standby in case I couldn’t get bolt cutters on it (the lock is kind of buried under the hardware that raises and lowers the motor) but I was able to snip it off in one quick action—a reminder that a padlock only deters the most casual of thieves.

By the time I got the motor in the truck, the pond had moved from the cover to the ground and it was time to figure out how to get the hat rod in place. There’s a small vent on the back of the cover that I can stick my hand in, but even standing on cinder blocks I can’t reach nearly far enough in to guide it. Fortunately, I brought a set of novelty grabbers and the thing that opens the trap door to my attic. 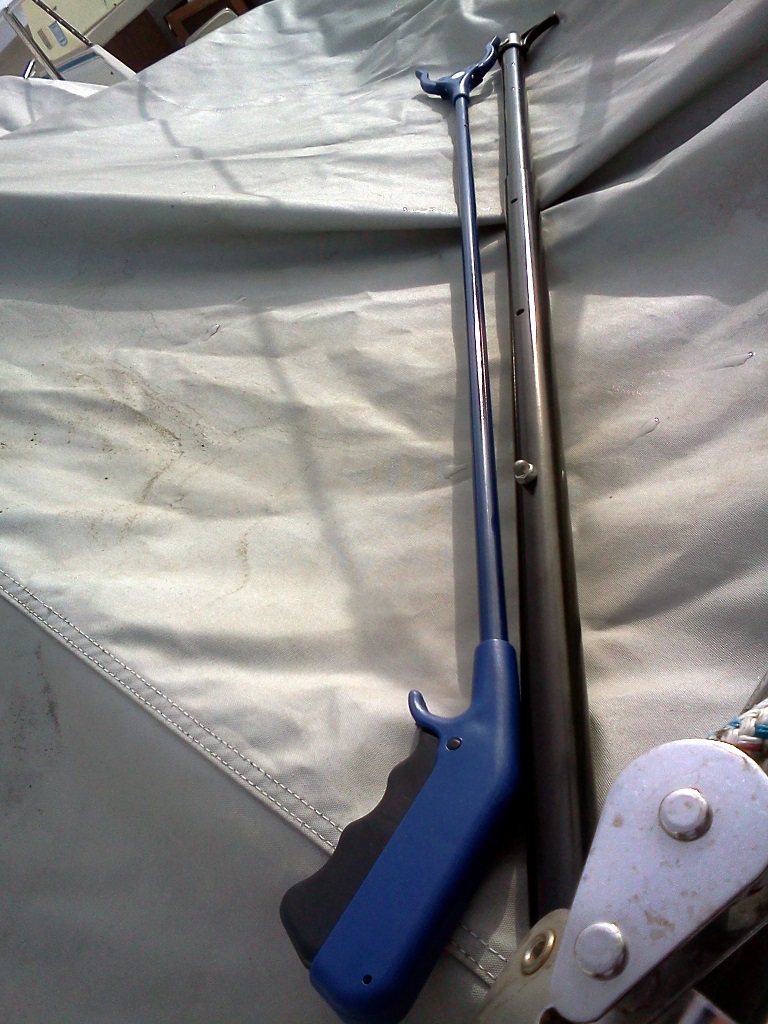 As dumb as it sounds, it turns out that these are the perfect tools for positioning a witch’s hat rod. I was able to position it with ease, laparoscopically, including feeding it into the tiny hole below the hat (I always forget that the cone isn’t open on the bottom).

I can’t believe it worked. And the timing couldn’t have been better. 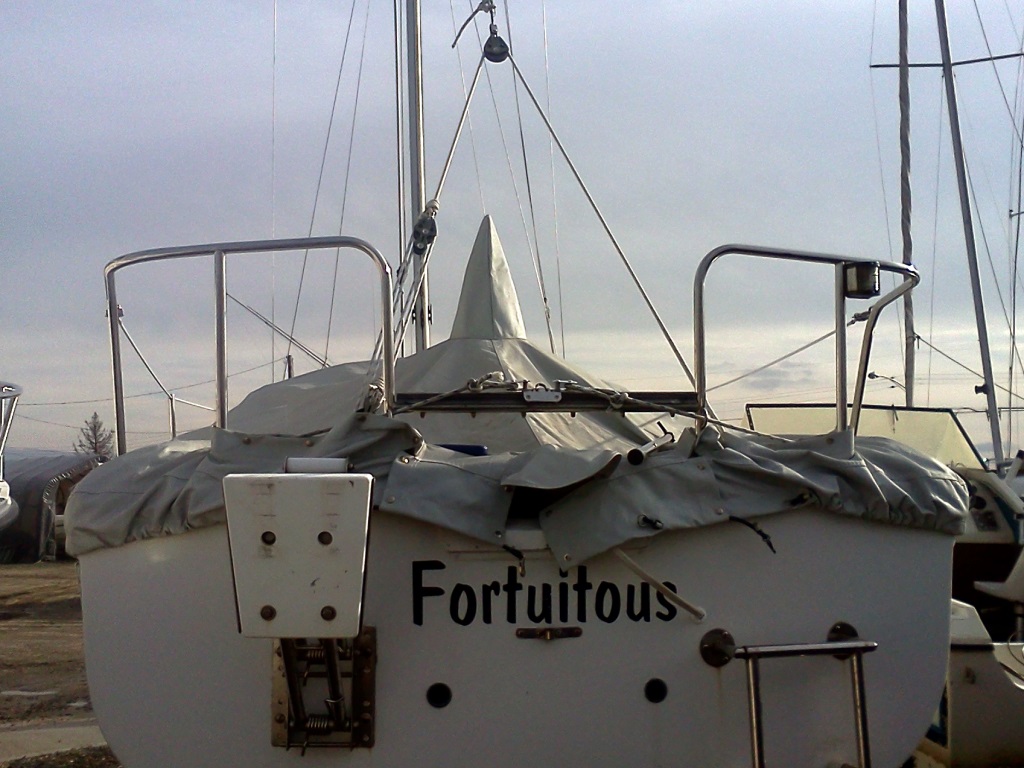 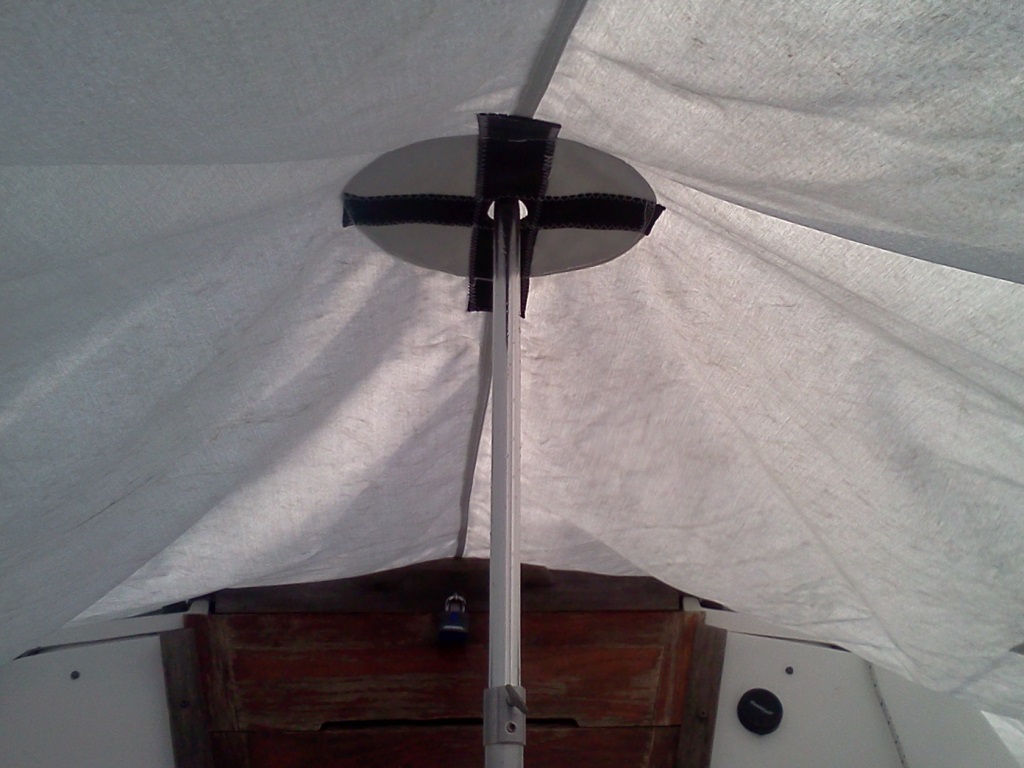 I said my goodbyes and Merry Christmases to the marina staff and thanked them again for getting everything up and running again after Sandy. All that remains for us is to winterize the outboard, but that can wait for a warmer day…in the meantime, it can stay in our kitchen, where motors go.

Stay tuned for the season in review, coming soon.