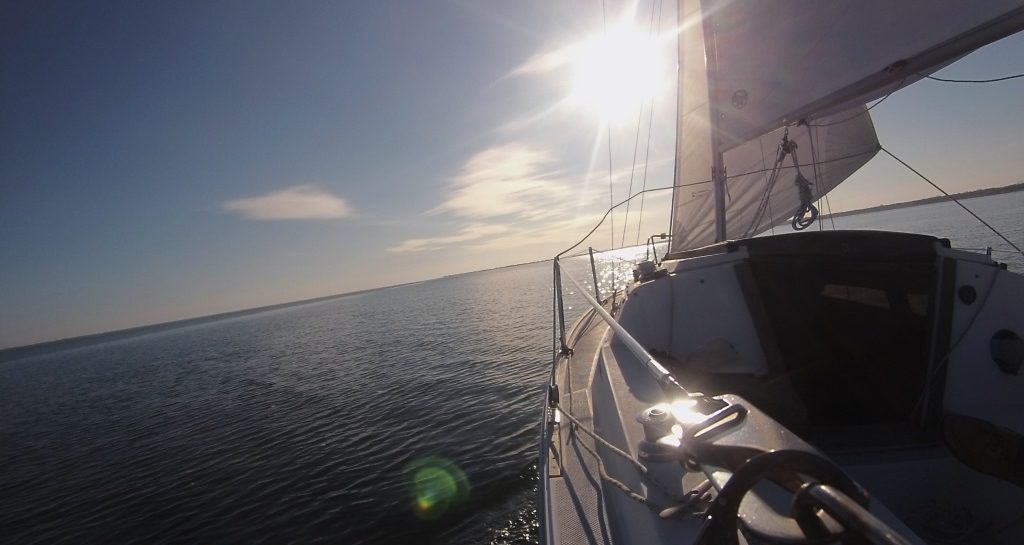 There’s a sweet spot, slightly past the bounds of reason and a touch before everything goes to hell, where the magic happens. For me today, that was sailing in December.

Although temperatures have recently increased from unseasonably cold to merely seasonably cold, Jen has a much lower comfort threshold than I do and the mid-40s still put sailing out of the question for her. She agreed to go to the shore with me and help me launch and retrieve the boat for some singlehanded sailing, since we both had to go to the marina anyway to put on the winter cover. I set off, hoisted the sails, and sailed over to Cedar Creek for some glamour shots—Jen brought stuff to work on while I was out gallivanting, but she agreed to take some rare profile shots of Fortuitous under sail. 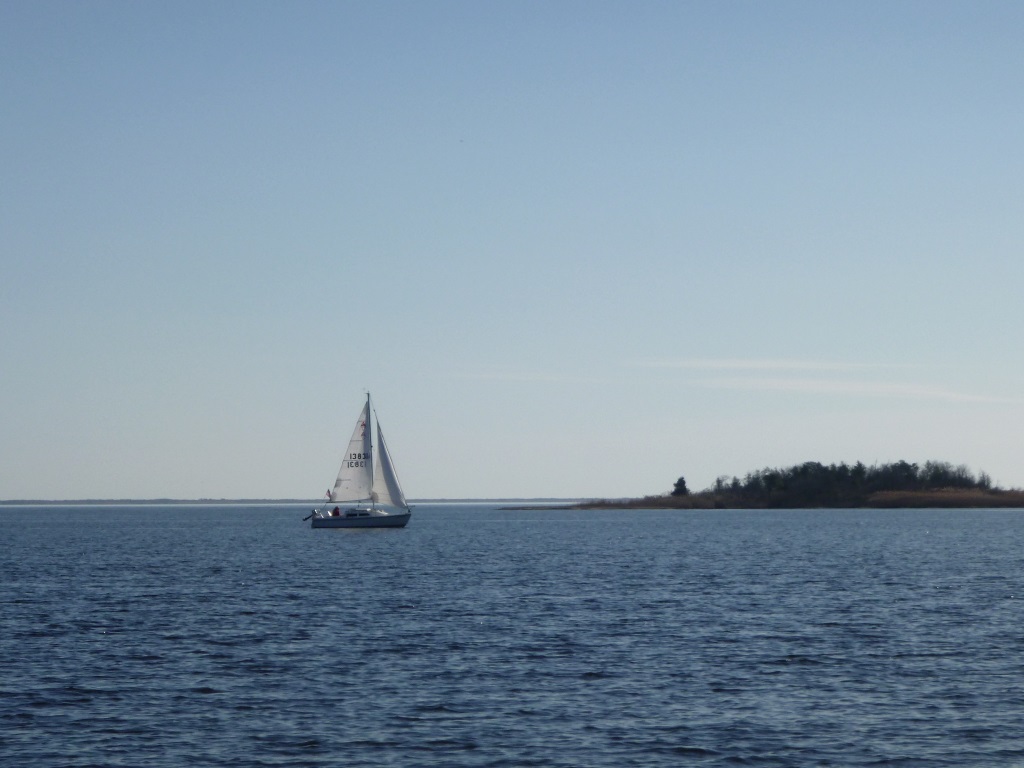 Of course, coming into the creek I cut the corner too tightly and ran aground. That was exciting while sailing solo. I would love to blame the fact that the state pulled all of the channel markers for the season, but I know that the channel there is on the southern side of the creek and my photographer was to the north.

It was cold, but I think I was reasonably prepared. My kit is listed here only for the sake of detail and not as a recommendation…keep in mind that I don’t own any sweatshirts (or really anything with “sweat” in the name) and refuse to wear shirts without collars in public.

I don’t even bother to put on a coat in 45° if all I’m doing is taking out the trash or something, but I appreciated having the layers on the boat. That kind of temperature wears on you when you’re just sitting there, exposed for extended periods.

And there were gloriously extended periods of just sailing. After leaving Cedar Creek, I sailed across the bay without any goal in mind. I sailed back wing and wing. The winds were light and I didn’t feel uncomfortable on any point of sail, despite it being only my second time singlehanding. A quick call to Jen confirmed that I still had time, so I jibed the main and turned north toward marker 39, which I could make on a long broad reach. I had the bay to myself. The only sounds were the thrum of the keel cable, the gurgle of my wake, and the occasional honking of distant geese. It’s not quite the silence of the high desert, but the effect of the mental reboot is similar. 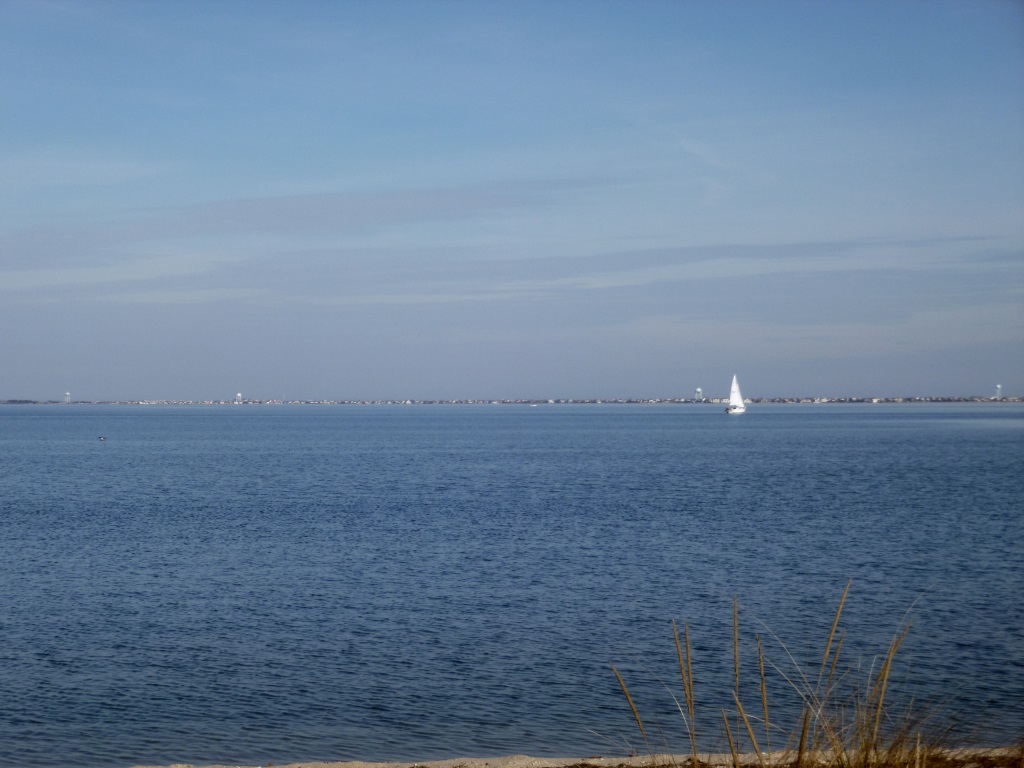 While on the reach I experimented with rigging something to hold the tiller. Singlehanding would be a lot easier if I had a tiller pilot or at least a tiller tamer so that I didn’t need to be at the helm (or out of control) every second. We have a line that holds the tiller while we’re at anchor to keep it from banging around the cockpit, but it’s not ideally suited for a boat in motion, as it’s difficult to make the types of small adjustments that make sense while underway. I eventually got it working in conjunction with some delicate sail trim, but I think I’d want something better if I planned to sail solo more. 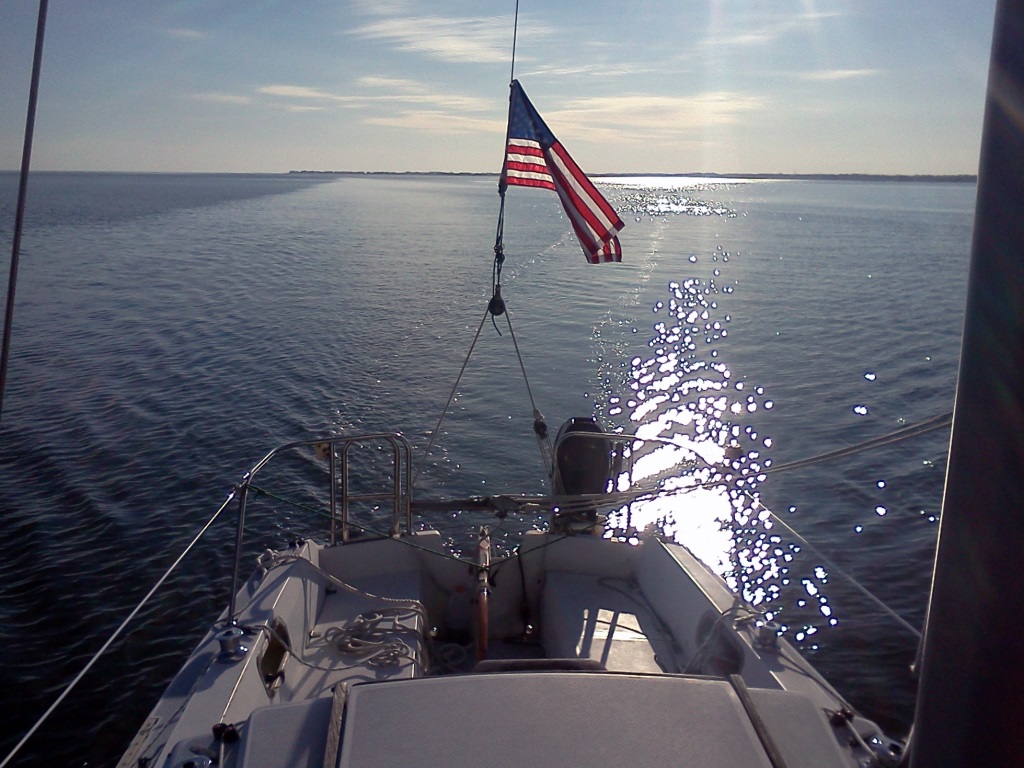 At the mark I tacked and headed back, close hauled. I’ve heard it said that gentlemen don’t sail to weather, but I think that there are exceptions when those gentlemen are wearing proper collared shirts. Both the actual speed and the sense of speed were better on the way back with the cold breeze in my face, and I wrapped up the sailing season with all sails flying, the boat heeling just so, and the tell tales streaming nicely. 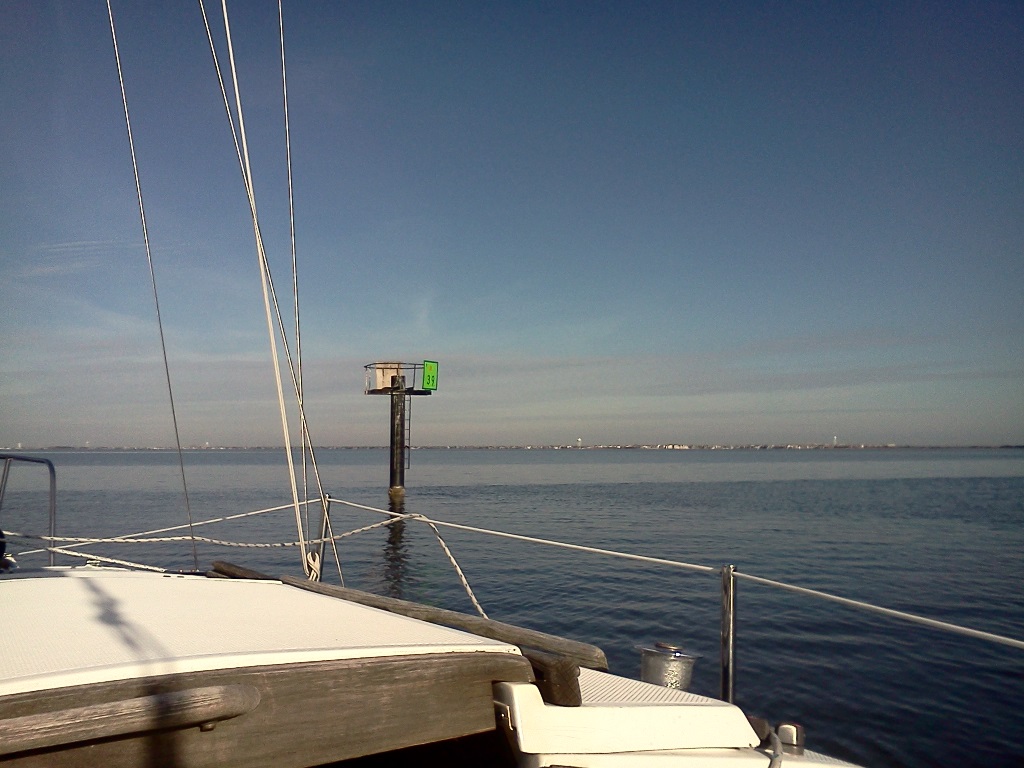 Jen met me at the dock, where we took off the sails for the season and cleaned out the remaining paraphernalia from the cabin. We had an unusually difficult time getting Fortuitous back on the trailer, and I wound up having to wade in at the ramp. The water was so cold it felt like it was boiling, but we got the boat lined up before my toes fell off. On land, we covered the boat, barely completing it before dark with these short days upon us. 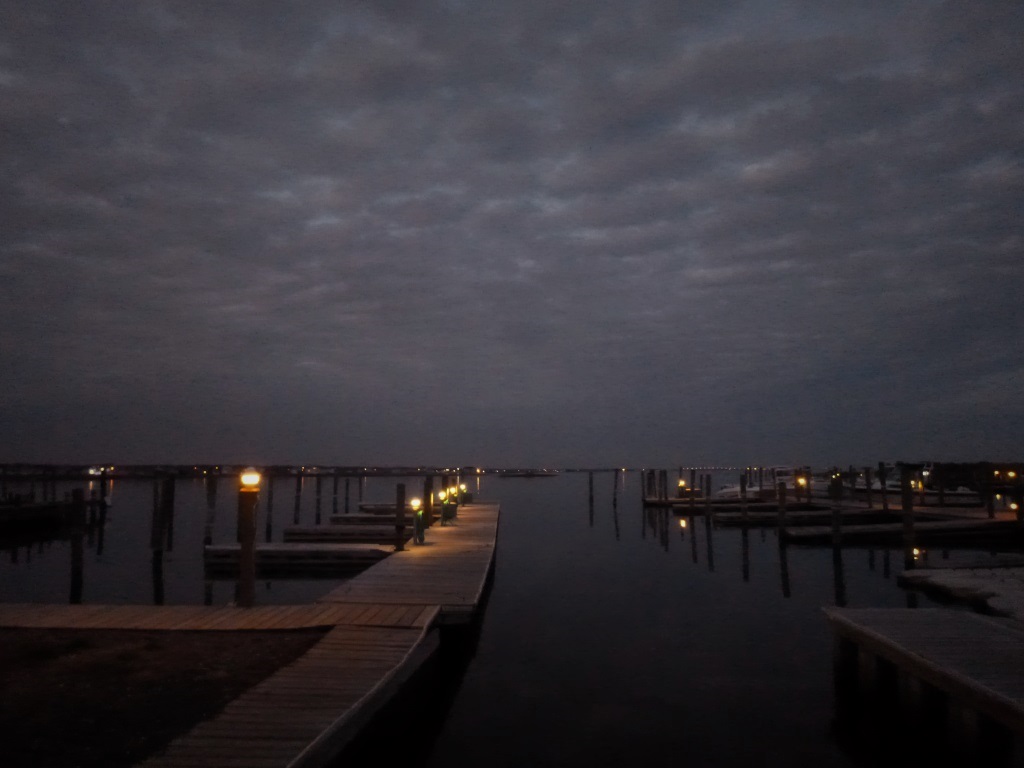 Sailing in December may be a little crazy, but I’m glad that Jen helped me complete one more spin around the bay. We missed some big trips due to ridiculous weather this year and didn’t find many realistic opportunities to push our boundaries. Continuing to sail beyond the technical and logical limitations has gone a long way toward making me feel satisfied with this season. Sometimes you’ve got to make it up in volume. 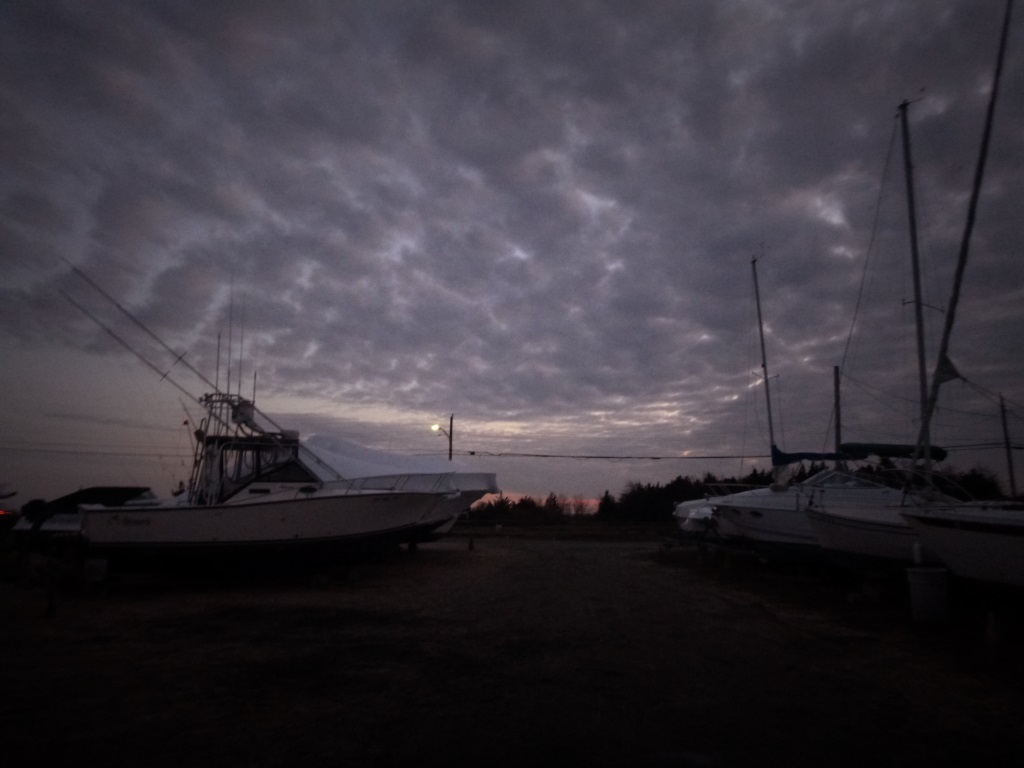 4 thoughts on “One More Sail”