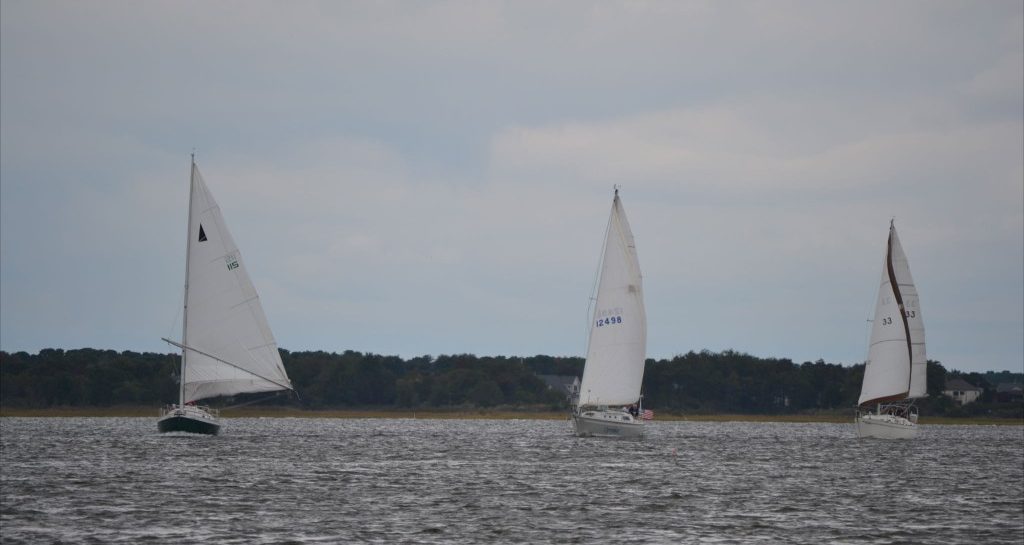 I had an opportunity to crew again on Providence II in this year’s Tall Oaks Challenge Race. The Windjammers were trying to win back the trophy from the Tall Oaks Yacht Club, which is the Gary’s Old Towne Tavern to our Cheers. I’m not sure if it’s just the natural order of things or if there’s some causation amid the correlation, but we lost the trophy as soon as Jen and I joined the club and haven’t seen it since.

Five boats from each side competed. Although Val is a member of both clubs, he set a rule for himself that he would always race against the incumbent, so he sailed under the Windjammer’s burgee. Stormy Petrel, while at Cedar Creek taking an extended break from her full-time cruising schedule, served as the committee boat. The course was of the windward/leeward variety (I drew a diagram here in a previous log entry) with two laps and port roundings. It was originally designated to have the windward and leeward marks set 0.7nm on either side of the committee boat, although I’m not sure that the ultimate placements approached that level of precision. 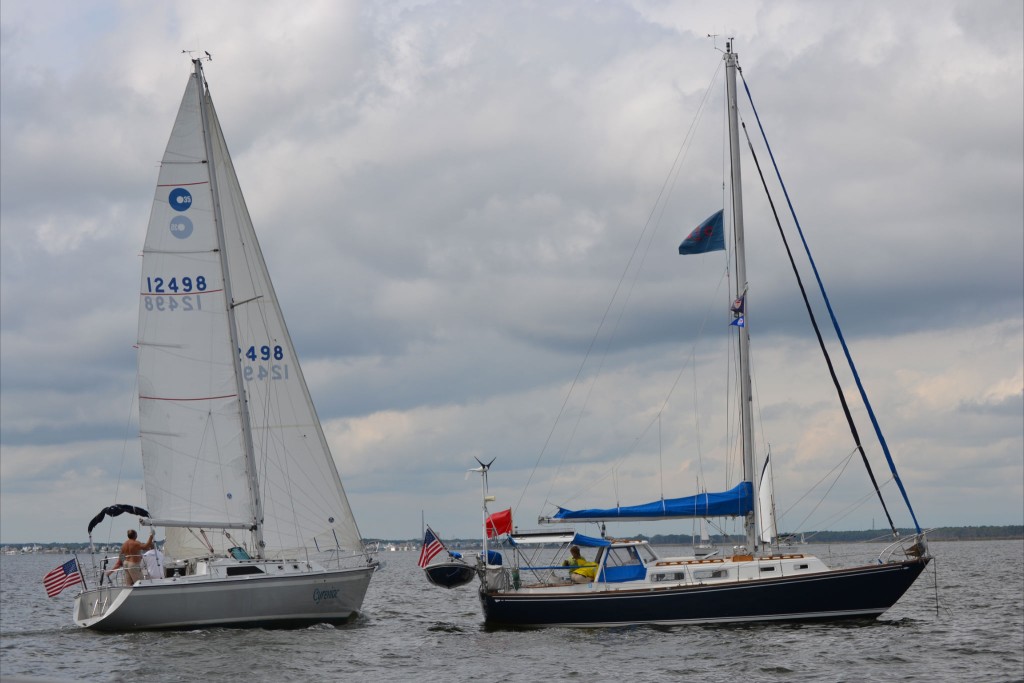 We had a decent start, and although we weren’t the first over the starting line we were in the lead by the time we rounded the windward mark and wouldn’t relinquish our position. We employed the topping lift on the whisker pole for the first time (in my racing experience on Providence II, anyway)—there wasn’t really enough wind in the jib to keep the pole from drooping, and the sail looked better with the pole properly supported. Pole sets were relatively clean, and the bow crew benefitted from a bit of practice as we waited for the race to start. We did all of the little tweaks that we could think of to maximize our performance, like lifting the centerboard and relaxing the backstay on the downwind legs and moving weight to leeward upwind to try to induce a little heeling, and things mostly went smoothly. We did get messed up at the second windward mark when the wind became confused near the western edge of the bay, and wound up having to take a few extra tacks, but a lot of boats found themselves in the same situation. Our commodore picked up some time by taking one huge tack to that mark, and did very well on the final downwind leg. Although we took line honors, Sashay wasn’t far behind us and wound up winning overall on corrected time. With the handicap, Providence II was pushed down to a respectable third on a day that favored lighter boats. 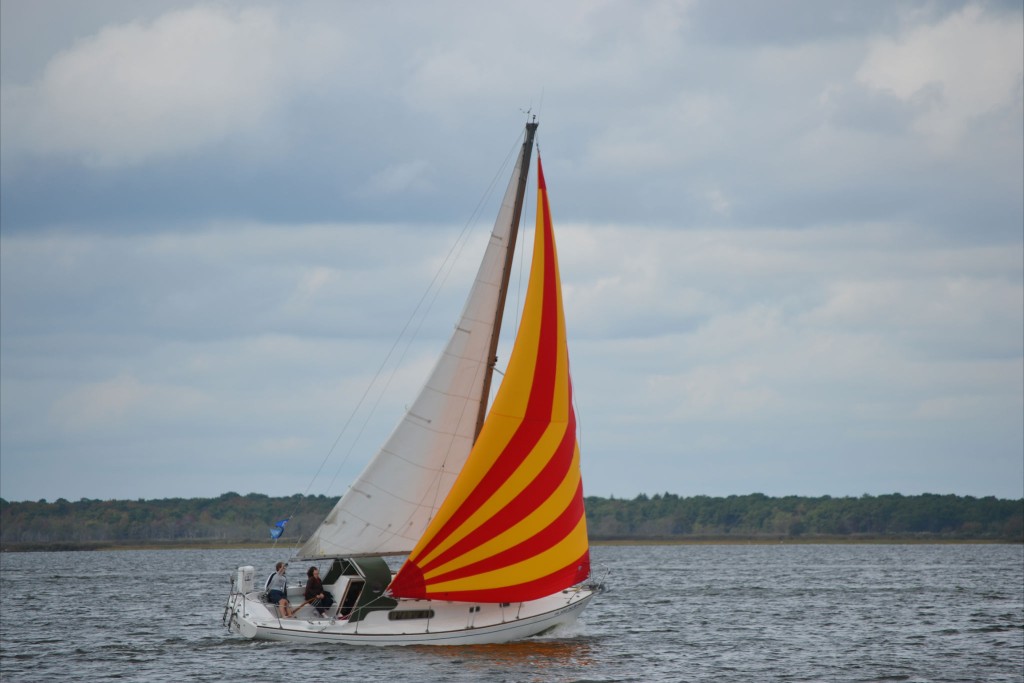 Alas, having boats finish in first and third places wasn’t enough. Tall Oaks dominated the middle of the field and wound up winning with a total score of 26-29. They had a particularly strong performance from the Nonsuch Inua, a large cat-rigged boat that sails really well for her rating, especially off the wind. Tall Oaks hosted an excellent party at their marina for both clubs, including live entertainment from a guy who did a mean Neil Diamond impression. We’ll now have to wait until 2013 for another shot at the trophy, assuming that Tall Oaks doesn’t leave it in a strip club or something while celebrating their third consecutive victory. 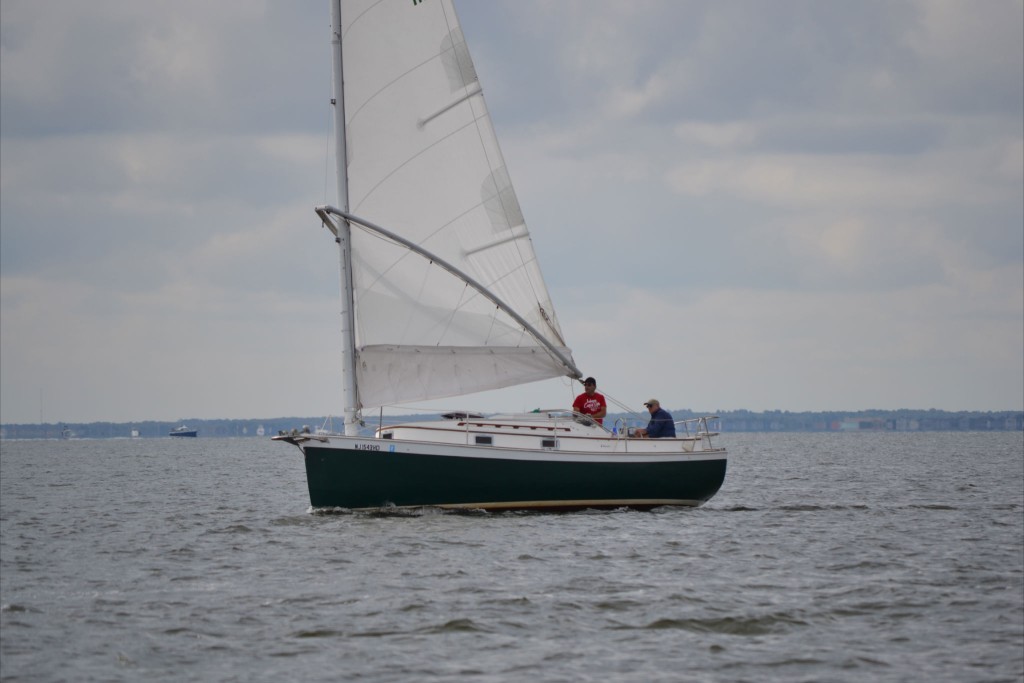