Although we didn’t get out on Fortuitous we certainly did sail, as we signed up to be race crew for the Windjammer’s annual Ladies’ Helm Race.

We weren’t sure what to expect going into it, but it turned out to be an incredibly easy going bunch. No pressure, no yelling, no cut-throat behavior, just laid back fun. Our kind of race. Jen and I were placed on a beautiful Pearson 35 with a couple who had things pretty well worked out. I don’t think they really needed us, but were extremely gracious and helpful, and kept us engaged without being demanding or impatient. 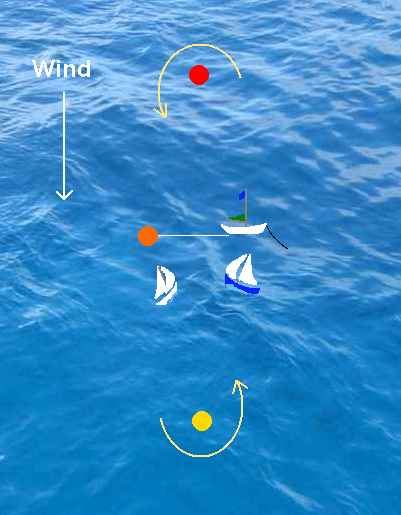 The race was a windward/leeward race, where you start behind an imaginary line between a marker and the committee boat, cross the line at the appointed time (hopefully), then head upwind, round the mark, and continue downwind to the other mark. We did two laps on a relatively short course. There was a minor collision at the start, although it was just an accident and not people getting all crazy with the racing. One of the boats dropped out to check on the damage, and another boat (not one involved in the collision) had a genoa track pull up later in the race, so 4 of 6 boats finished. Our boat came in first in actual time and second after handicapping, but it was really more about getting out there and having fun than winning.

After the race, we had the traditional Ladies’ Helm Race meal of sausage and meatballs (really) and got to meet several members of the club and talk sailing. It was nice to get to meet some other sailors and get some information on places to go and things to do on the bay.