After several weather-related delays, our club finally had the last race of the Summer Solstice Regatta.

I was strongly considering not racing, since we were pretty far out of contention, but the forecasts leading up to the race were showing a near-ideal 10-12kts of wind in the form of a cool sea breeze…at least compared to the recently obnoxious temperatures inland. So, at the last minute, I rounded up crew, put in a request for a half day, and decided to take one last stab at it.

It was hot in the marina, we prepped the boat and left as soon as possible to get out into the breeze of the bay. The course was the familiar windward/leeward with the starting gate near the mouth of the creek and ICW 40 as the windward mark. The start was delayed by 15 minutes, and we had some time to sail around on the main before things got underway.

In my Tuesday night racing this week, we had a guest who asked “how do you know who wins?” and after some terse discussion (during the starting sequence), it became clear that he didn’t understand the start—or more specifically that all of the boats start at the same time despite their seemingly random antics while the horns are going off. The start of a sailboat race is kind of a mess. You can’t all pull up to a line on the water and wait for a light to change like in drag racing, because sailboats don’t stop and start with the press of a pedal. Instead, they circle endlessly behind the line while a countdown is going on, jockeying to arrive at the line in good position and with speed as the race starts. Just as I never learned the Sicilian Defense or the King’s Indian in chess, I never learned any opening moves for sailboat racing. My technique thus far has been to sail away from the line for half the remaining time, then sail back, hoping that it would take approximately the same amount of time. It doesn’t always work, but it sounds very official to yell things like “tack in 15 seconds!”

Something (probably my math) was off in this race. Sailor Steve had coordinated his racing watch with the official countdown, so we knew exactly how much time was remaining before we could cross the line, but we found ourselves in way too close with a minute left to go. Sailor Steve suggested that we just do a turn to bleed off time, which is something that we’ve done numerous times in our Tuesday night racing. I looked around and there was no one near us, so I threw us into a tight turn to starboard. Jen was confused and thought we were tacking, but I was able to keep her from releasing the sheet. The jib backwinded and propelled us through the turn, eventually coming around 360º. We were still too close, but the other boats were still well off the line, so after regaining some speed, we spun around one more time. I audibly coaxed Fortuitous into accelerating, and we hit the line exactly on time, on starboard tack, and in front of everyone.

Tiki crossed somewhere behind us and started chewing up distance. They were pointing higher than us and faster, and eventually passed us on the inside on the long starboard tack toward the mark. Restless was several boat lengths behind us, and I knew that we’d eventually have to tack to port and pass in front of them, which would give them rights over us if we were in a crossing position. I didn’t know whether to tack early or late to give us the best chance to pass them cleanly…but I decided not to watch. From the leeward side of the boat, I kept an eye on the jib’s telltales (which looked as though they’d been ironed-on to the sail in the “you’re flat-out hauling” position) while the crew sat on the high side and observed Restless. They assured me that we were gaining on them, which, to me, meant wait and tack on the port layline to the mark. This worked perfectly.

We tacked to starboard briefly then jibed around the mark. The course wasn’t set exactly parallel to the wind, so we were on a broad reach back to the start instead of dead-downwind. Tiki, now well ahead of us, attempted to pole out their jib on the “wrong” side, but I didn’t think we were far enough downwind for that work. We had no trouble keeping on jib filled, so we simply moved crew forward and reached as fast as we could.

As we came around the mark, we tightened the sheets and stayed on port tack, sailing west until we could get to the layline to 40, then came about. We ended up a little closer to a fixed government mark than I would have liked, but I was committed to not having another “Marker 39” incident and we squeaked by. We jibed again, eased the sheets, and settled into a broad reach to the finish. Tiki finished well ahead of us and probably took first, but it was clear that no one was going to challenge us for second.

I had considered staying on the boat Friday night, but had come to the conclusion early that I wasn’t going to be able to drink enough to enjoy sleeping in the hot, still air of the marina, so I hung out with the club for a few hours without drinking and then drove home. Still, it made for a late evening, and I was pretty lethargic when Jen tried to wake me up to go sailing.

It was still on the low-end of absurdly hot out, so we decided that we would just go for a swim. Swimming would ensure minimal boat prep, minimal boat-putting-away, and still allow us to have a day on the water.

We were originally going to go to Governor’s, because by this time of year, Berkeley is often full of jellyfish, but I’d just been to Berkeley last week and it was clear. We decided that we would swing by and see how crowded it was, and when there were few boats there, we anchored. All of these small decisions turned out to be prophetic, because while we were swimming, I pointed at this and said “that doesn’t look good”: 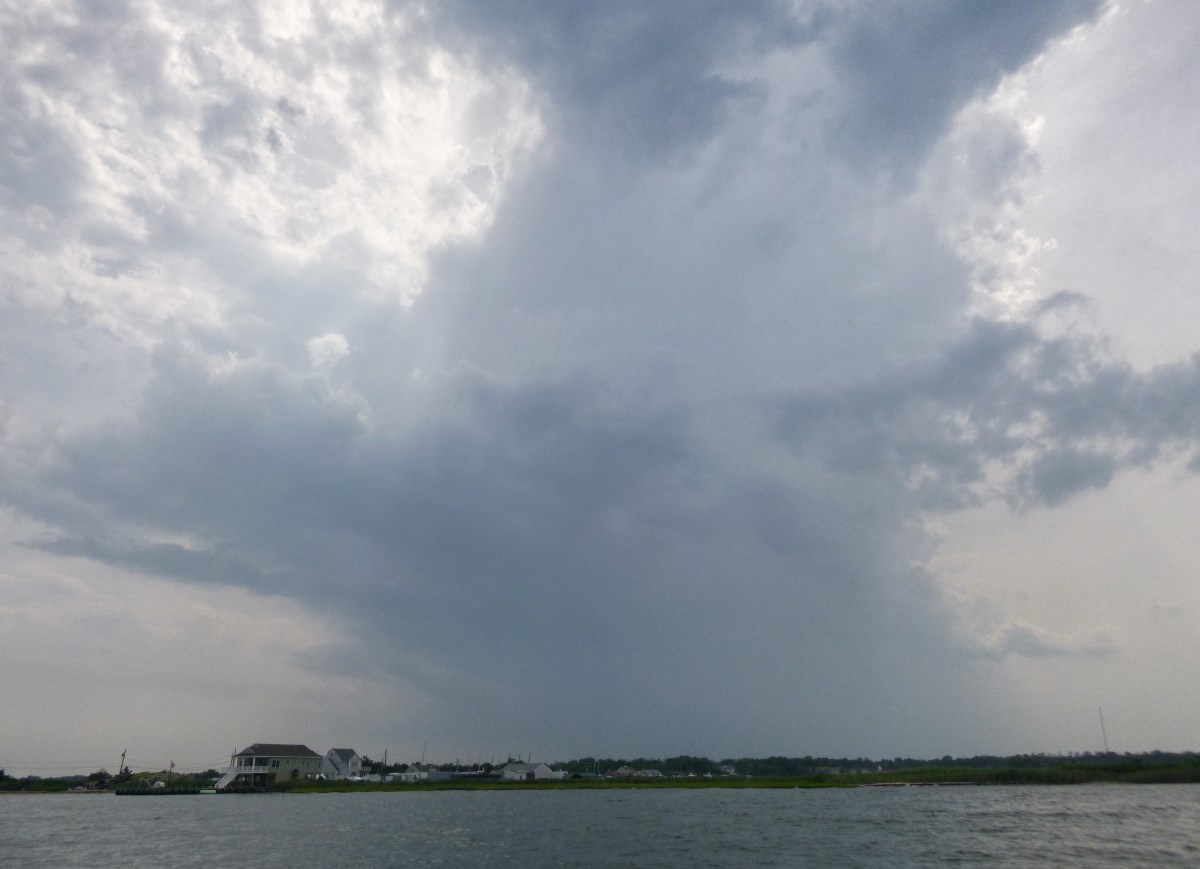 We quickly got out of the water and started making preparations to haul anchor. By the time Jen was scraping the mud off, we could hear thunder.

We joined a parade of boats funneling into the creek at high speed. The rain started when we were about 2/3 of the way through the channel. It wasn’t torrential, but it was those big, soaking drops of rain that make an impact when they hit you. Lightning streaked across the sky in the distance as I pondered the height of our aluminum mast.

There were boats behind me as I came into the marina, and between that and the rain and the lightning, I was probably coming in a little hotter than I should have. I wound up hitting a stanchion on the finger pier on the way in. As we were unloading, I saw Lorelei coming in, and quickly jumped off to try to help them dock. They were also coming in fast and nailed a stanchion to their finger pier, to the point where they had to back up and try again, which got them further fouled up. I was glad to be there to help, and felt a little vindicated that I wasn’t the only one (it helped that he’s a commercial pilot, where I assume that landings have higher stakes).

Jen and I went home wet after a shortened day, but I was still glad that we got to go out and have a swim. There are many ways to enjoy the boat. Racing might be the pinnacle for me, and we had a hell of a race on Friday, but sometimes a lazy day swimming and lounging at anchor can be good too, not to mention that it can quickly turn into an exercise in storm avoidance and high-pressure docking.

Thanks to Jen and Sailor Steve for a great regatta. I hope to have results soon.