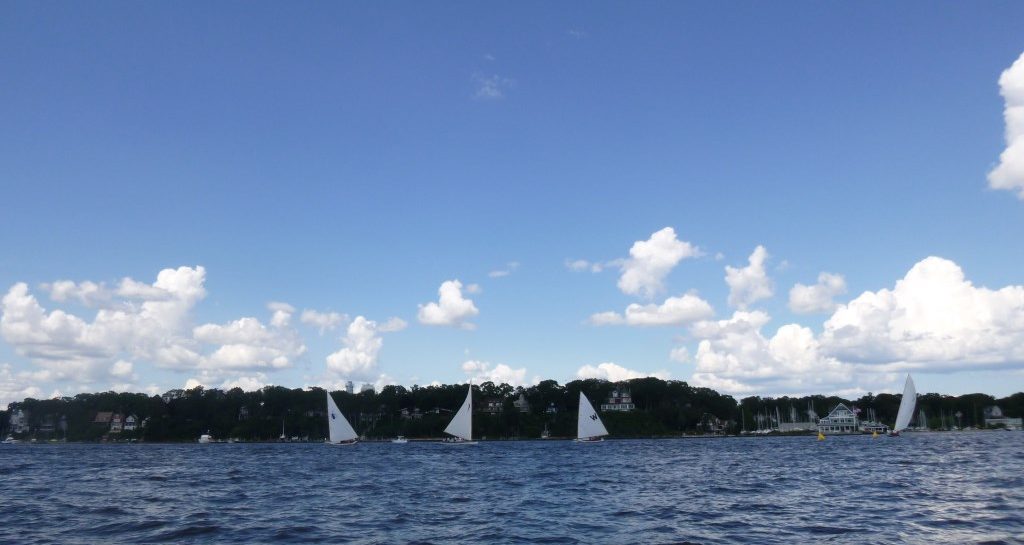 As day sailors, we often choose an objective based on wherever the wind happens to be blowing. We’ll sail into it if we can and then hope for a relaxing downwind run back, since our port of origin and destination are often the same. With an unusual northwesterly wind, predicted to be around 10kts gusting to 15, we decided to sail north to the Toms River. At least they got the direction correct.

The wind meter at Trixie’s, which has the capability to show a range of recent readings, was showing 0-9mph (under 8kts) when we left, and that seemed about right. The bay was calm, and we rigged to fly everything to try to catch what we could. As soon as we got the sails up the wind stopped, and we bobbed around aimlessly. We had spun almost 180° by the time the breeze filled in, so we jibed and got back on track.

The wind was just northerly enough that we couldn’t make marker 39 and needed to tack to stay in deep water. While on starboard tack, a surprise gust of wind positively gripped the boat and sent her on her ear.

That horizon is usually a lot more, uh, horizontal. Fortuitous took it in stride, and things immediately settled back down. We shook it off as an anomaly. On the next tack, however, it was more of the same. 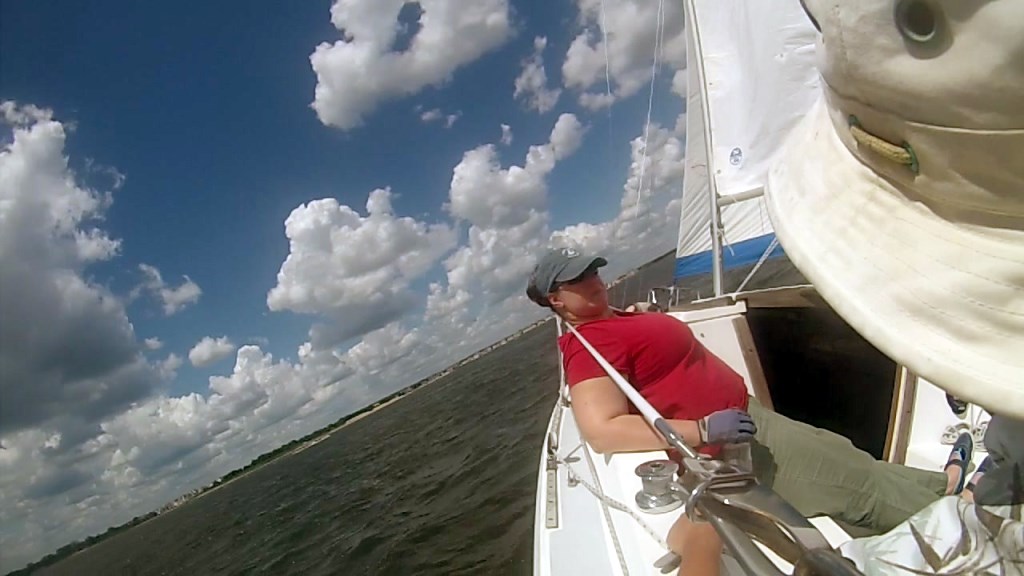 This time we were pinned for an extended period of time. I eased the main to dump wind, which usually allows us to pop back up, but that barely helped; we were heeling excessively on just the jib. It was apparent that we were overcanvassed for whatever the conditions had become. I furled in the jib and let the main luff a bit to buy time while we decided what to do next.

We’re not awesome at tucking in a reef underway. We don’t have the sort of system where we could just relax the halyard and pull a line…it involves going forward and manually cleating down the reefing cringle and then pulling down the clew with a second line, which is all best accomplished while motoring into the wind. In that part of the channel though, the wind was coming from land, and we couldn’t very well drive into the beach while we fiddled around. We happened to be at a turn in the channel (which guides boats around the aforementioned land) where we could head off into a broad reach, so I decided to run that leg on the full main and reef down at the next turn—we would be on a calmer point of sail and have plenty of room at the end to perform a less stressful reef.

…which actually turned out to be a decent plan, despite the non-stop fun parade of powerboats, all clearly in a rush to get somewhere. 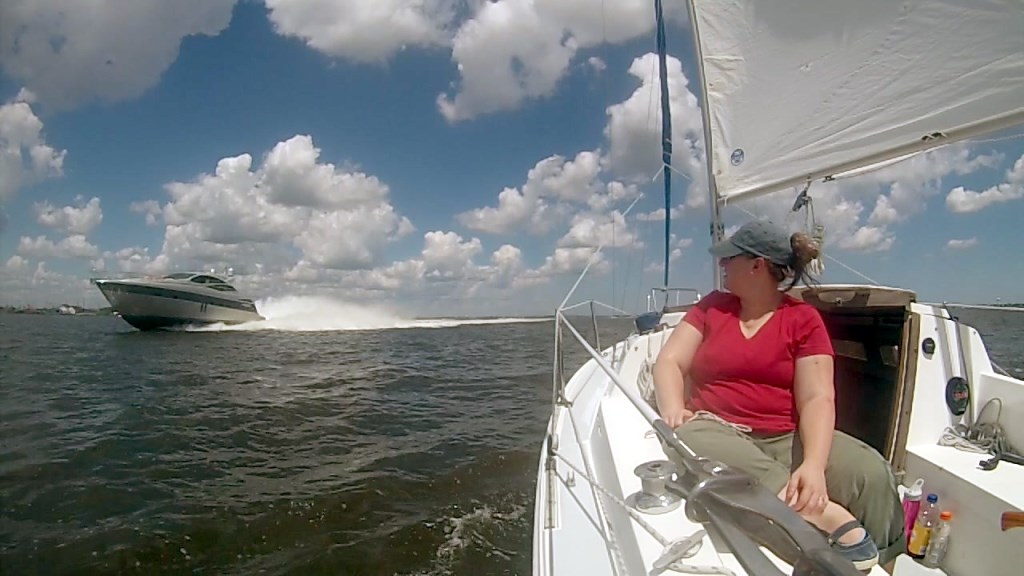 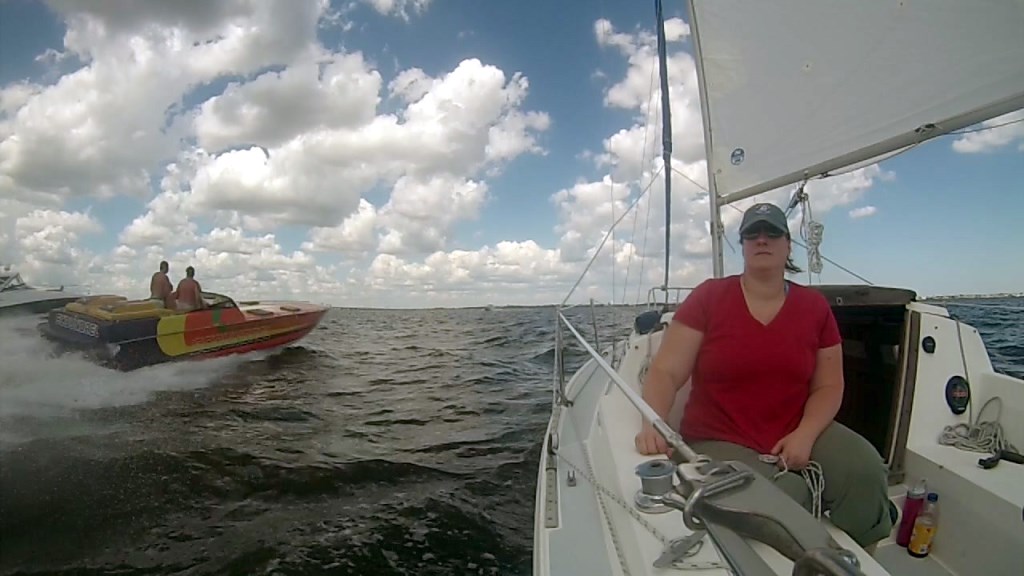 First we got buzzed by some sort of metallic motor yacht trailing a proud pile of spume, which not only rocked us but sent the entire mooring field at Martell’s rolling and bucking. Then, as a normal fishing boat calmly traced around our port side, some imbeciles in a multicolored penis extension decided to cut between us at, I don’t know, 60kts and 140db? They couldn’t have been more than two boat lengths away from us or the fishermen. That’s senselessly dangerous on crowded inshore waters.

Even with the wind singing in the rigging and the concentrated foolishness in the narrow part of the channel, we managed to successfully get to 36 and make the turn. We fired up the engine and Jen reefed the main without issue. We tried to sail up the river, but we couldn’t point quite high enough and wound up motoring in (after almost causing a collision of our own when got caught in irons and drifted sideways toward an oncoming sailboat—but hey, we were kind of on starboard tack by the time they needed to take evasive action, and unlike the weaponized big-block morons, we could have successfully fended them off with our bare hands without erupting into a fireball. I still felt bad though…sorry guys.)

As we’ve mentioned before, the Toms River is a picturesque place to sail. It’s held on to a little more sailing tradition than a lot of the bay, and we got to sail past the finish of a Barnegat A-Cat race—a class of boats specifically designed to race for the Toms River Challenge Cup, the second oldest sailing trophy in continuous contention after the America’s Cup. Spyder took the race with a resounding cannon blast. 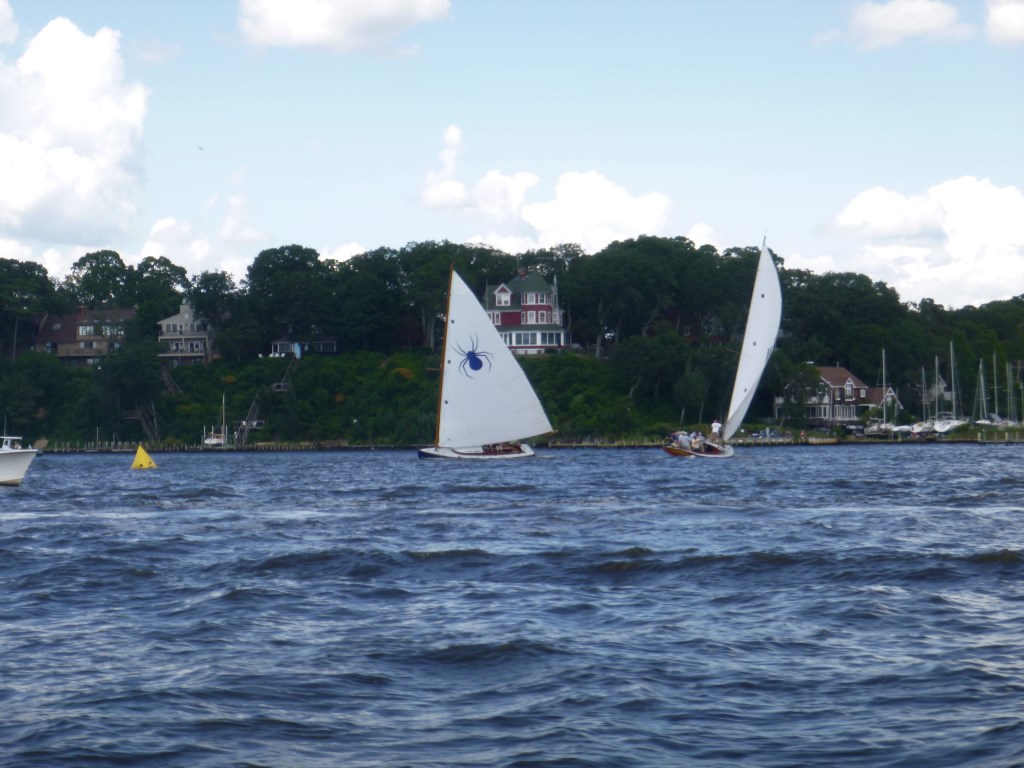 I also thought that the clouds were particularly interesting. I’ll have to keep these in mind when they tell me that it’s going to be 10kts and we’re getting tossed around like a bath toy. 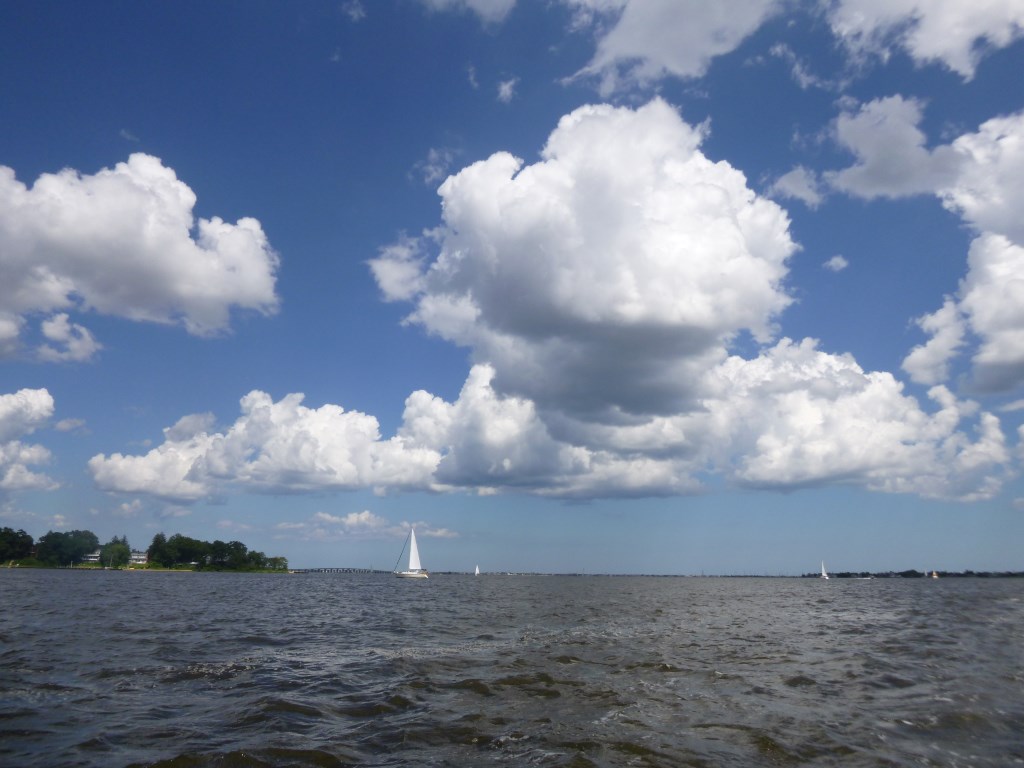 Once we got into the part of the river where it opens up again, we resumed sailing and were quickly informed that the wind had not lightened. Even on the reefed main and a tiny scrap of jib, we managed to get the side decks wet as we short tacked upstream. 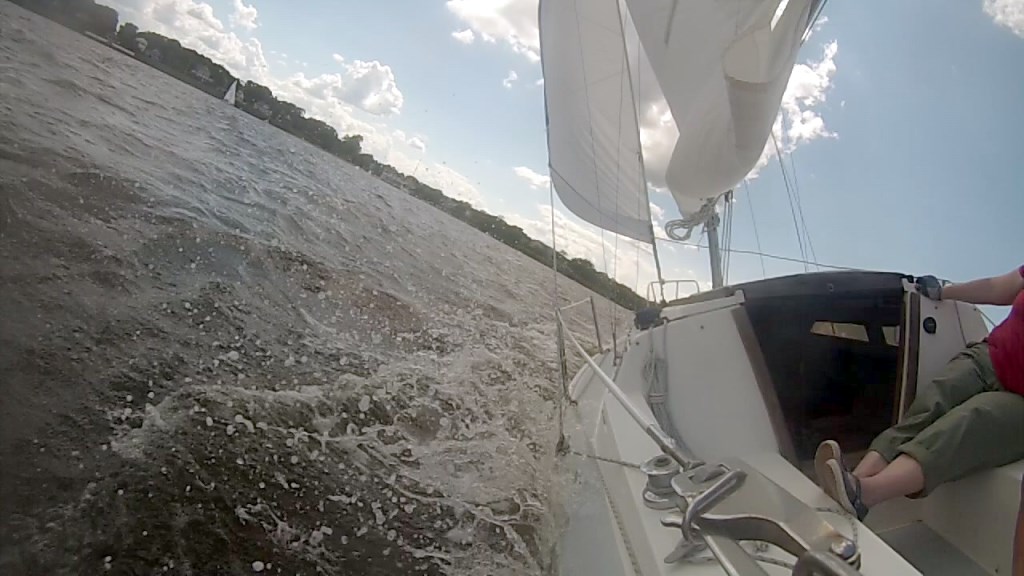 As we were making our way up the river, I noticed that we were being stalked by a big ol’ Cabo Rico cutter. At first they were just flying the staysail, then they unfurled the foresail, which I took as a sign of aggression. I think we were holding our own for the most part, or at least not completely embarrassing ourselves, but she was obviously handling the breeze a lot better than we were—it probably takes that much wind just to get a heavy cruiser like that rolling. Rather than show up on their Wall of Shame, we headed downwind and started making our way home. 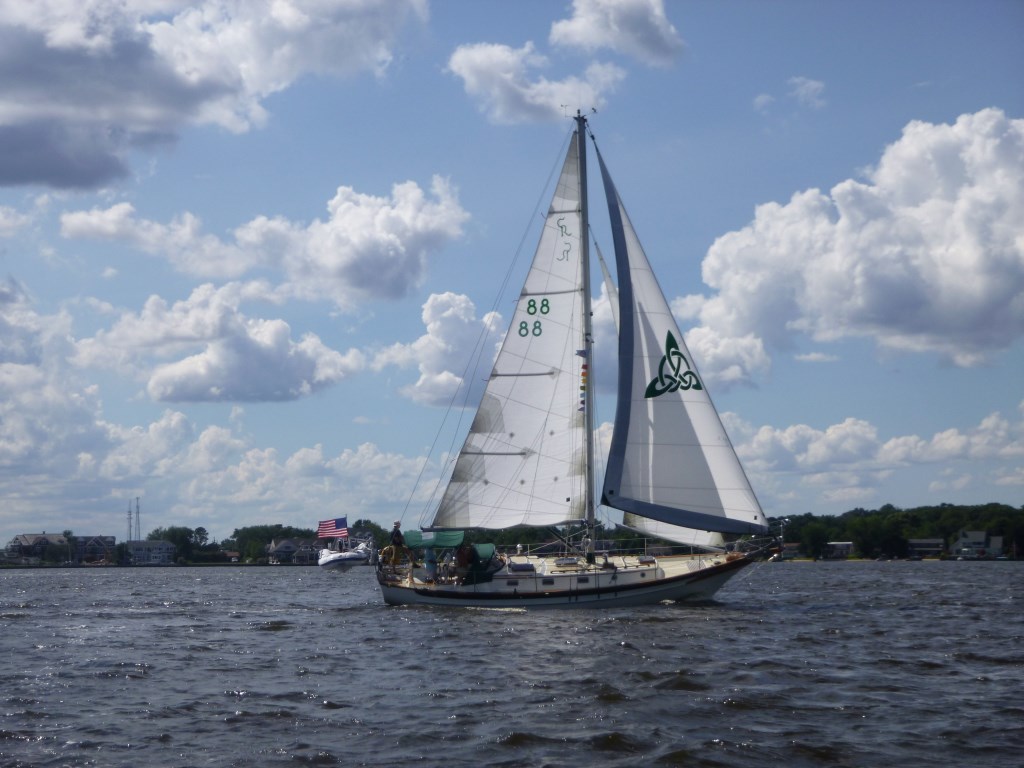 The sail out of the river was relatively uneventful, and we made great speed even with our shortened sails, alternating between wing and wing and broad reaches as the course dictated. We bumped once (well inside the marked channel) at the mouth of the river, but didn’t need to bring up the keel.

As we made the turn and came onto a beam reach, I found the tiller to be very heavy and was fighting a lot of weather helm. I became convinced that the rudder had kicked up a bit when we touched bottom, but we weren’t really in a position to do anything about it there so I let out the main sheet a tad until we got to 38. We had some open water there, where we heaved-to and found the rudder to be fine. I’m still not sure what the problem was…I may have had the sails trimmed wrong, or maybe the jib was just too small to properly balance the boat on that point of sail. We had no troubles once we resumed sailing downwind, and made good time back to the marina.

Upon arrival, we found that most of the contents of the interior of the boat had reached entropy, which is to say that between the heeling and getting blasted by boat wakes, everything wound up in a jumbled pile on the cabin sole. While some settling is bound to occur during shipping, I’ve got to think that Jen and I have also settled in a bit. It probably sounds trite, but it wasn’t that long ago that we might have doused the sails and motored home in those conditions. There was never a question of whether or not we could make it. We just re-trimmed and sailed on.

4 thoughts on “Some Settling May Have Occurred”