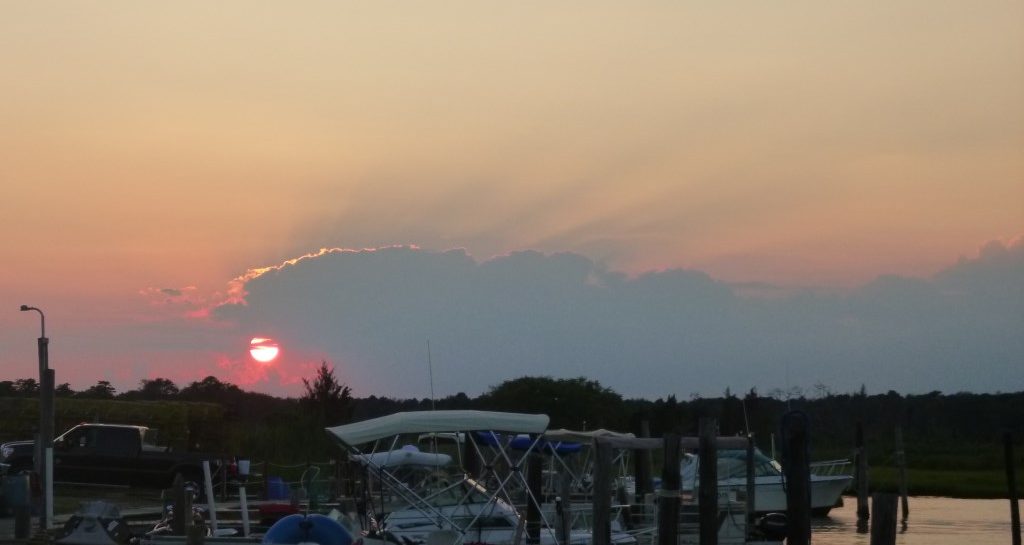 Our typically antisocial tendencies have again been surmounted, as Matt and Amanda joined us for a day of bobbing around the bay.

Trixie’s was packed with sailors from Hobie Fleet 416, who were in port for this year’s Barnegat Breezer Regatta. It’s cool to see so many people coming out for a sailing event in this area, and nothing adds a dash of color to the bay like a sea of Hobie sails. The Hobie drivers are good folks, and we certainly appreciate the work they did to help clean up the marina after Sandy.

I’m curious to learn how the racing went, because it wasn’t exactly hull-flying weather out there. The unusually light winds were perfect, however, for taking out a couple land-dwellers in benign conditions.

We were able to run the full genoa and main as we made our way down toward Forked River among the bay’s complete armada of fair-weather boaters. The channel was fairly churned up from all of the powerboats zipping past, which put a damper on our ability to maintain much speed. While we were bouncing over wakes and shaking off any possibility of laminar flow over our sails, the larger sailboats were passing us with more ease than usual. I tend to think of inertia as bad thing, since a heavy boat at rest tends to stay at rest, but I guess there’s something to be said for a heavy boat in motion.

I’m not sure why we ever follow the channel, at least in that direction. There’s plenty of water to the east, but the markers draw my attention like a magician’s handkerchief. We bailed at BB and headed over toward Tices—not with any intention of going there, but just to get out of the maddening crowd. One of the highlights of the trip for me was when we found an empty patch of water and dragged Matt around by a rope for a while.

This was some good clean fun, and we did not wind up having to do any man overboard drills to get him back in the boat. I knew that we weren’t generating a ton of horsepower in those conditions, but I couldn’t believe how slow it made us. We hope to someday have a dinghy, and it makes me appreciate the value of getting one that tows well.

After our sail, we anchored in Berkeley and commenced with the requisite cocktails and swimming. I couldn’t find my go-to daiquiri rum, Mount Gay Silver Eclipse, so I tried something new. Cruzan, from St. Croix, has long been known as a good value in rum, although some people were worried about the brand after they were purchased by Jim Beam’s holding company and stopped producing their 5 year Diamond Estate rum sometime around 2008. They were (or perhaps still are…it’s kind of unclear) making something called Aged Light Rum, which is a blend of rums aged 1 to 4 years that seems to draw a lot of “okay” ratings, but it appears that Estate Diamond may be back. I picked up a bottle of Cruzan Estate Diamond Light Rum: a blend of rums aged 5 to 12 years in oak. It’s pretty unusual for a light rum to be aged that long, and I found that it was well worth it. It was quite smooth and made an excellent daiquiri. I give it 4.5 eye patches on the 5 eye patch scale. Or, to be more positive, 5.5 sighted eyes on the 5 pirate scale. Wait, did that sound better or worse? I don’t know. Regardless of how you count it, it was good rum at a reasonable price.

We had a good time, and I hope that by using Matt as bait, we have sufficiently allayed Amanda’s fears of person-eating sharks in the bay.

4 thoughts on “Trolling for Sharks”