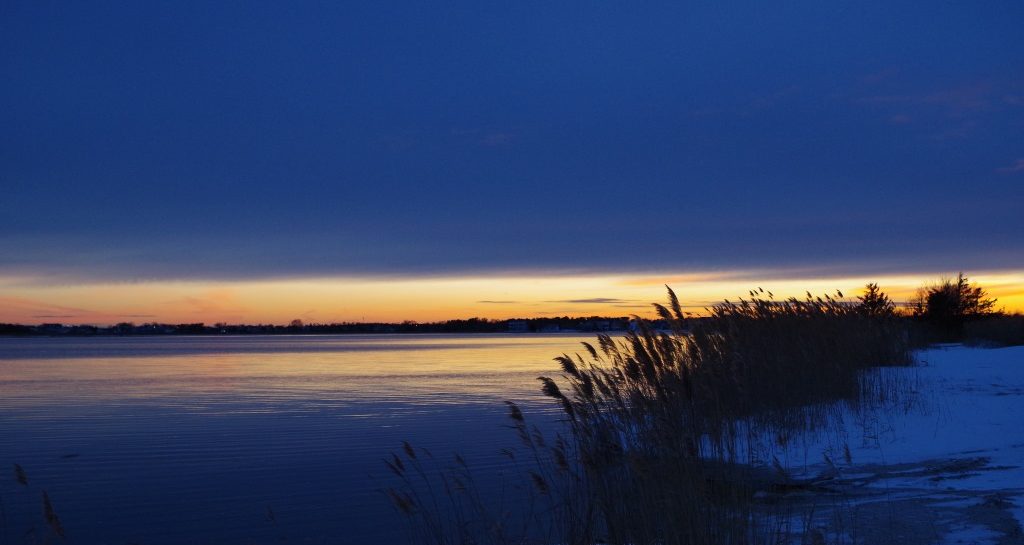 It was rough to see my weather guy fall on his sword.

My deepest apologies to many key decision makers and so many members of the general public.

I think the National Weather Service forecast for my area peaked at 16-28″ of snow, which likely contributed to the governor’s decision to put New Jersey under a state of emergency and enforce a travel ban. The actual result here was more like 3 or 4″, but even if Gary Szatkowski hadn’t apologized, he’d still be ok with me. As the chief meteorologist for NWS Mt. Holly, he achieved paragon status for his courageous (and accurate) Personal Plea in the lead up to Sandy. This storm did dump a bunch of snow on New England, but I guess no matter how many Monte Carlo simulations you run, the fringe is still hard to predict when an Alberta clipper and nor’eastah decide to tag-team a region.

Reports were that the shore received more snow than we did inland, and once the road crews had had some time to tidy up I drove down there to check on the boat and make sure that our new cover was properly shedding snow. All was well.

I brushed off the small amount of snow that had accumulated and checked to make sure that all of the tie-downs were tight. As the trailing edge of the storm left, there was a crack in the overcast, allowing the sun to sneak through and illuminate the marina. 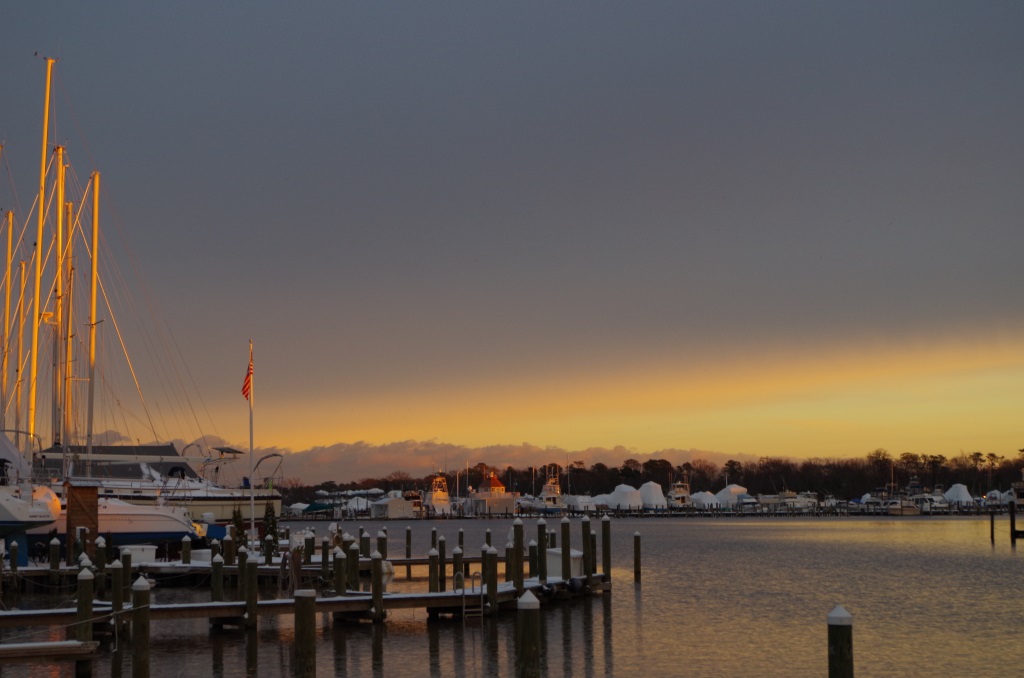 I wasn’t sure that my camera would even be able to capture the somewhat surreal light, but I think it got the gist. 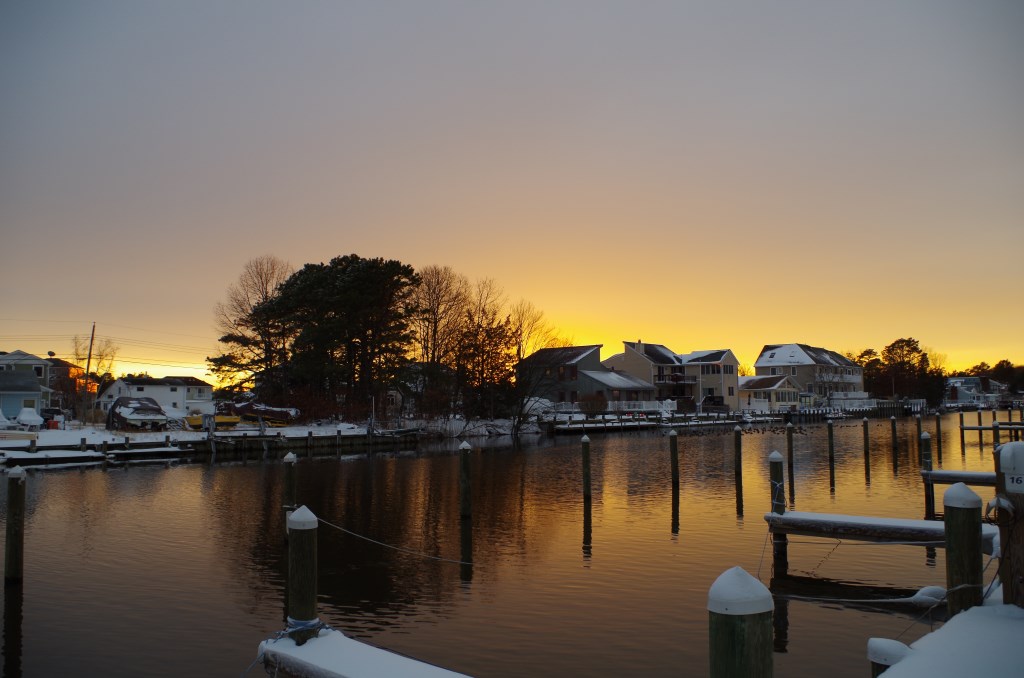 I ran into Val and we talked briefly, but I was freezing and bowed out to get back into my truck and warm up. I did want to see if the bay was still frozen though, I so took my time and made my way on unplowed streets to Berkeley Island County Park. There wasn’t any ice on the bay or creek, but the sunset was still lingering below the clouds to the west. 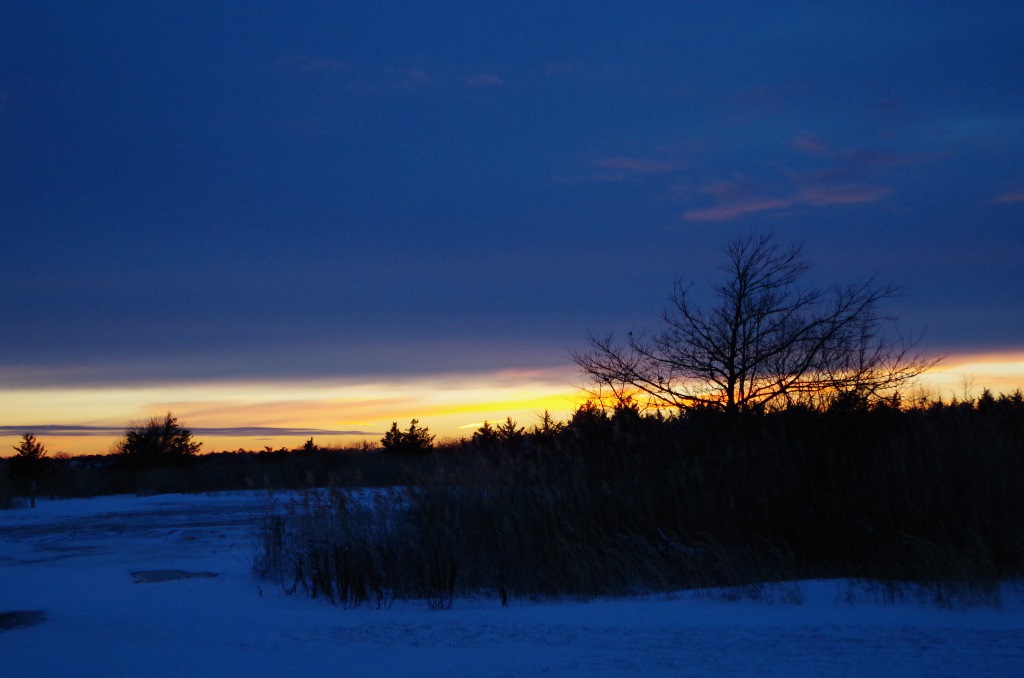 Getting less snow than predicted is certainly better than the alternative, and at least whatever remained of the storm made for an enjoyable twilight. I still think that the National Weather Service was right to be cautious based on what the models were saying, and while I don’t think Gary Szatkowski’s apology was strictly necessary, it did demonstrate a lot of integrity.