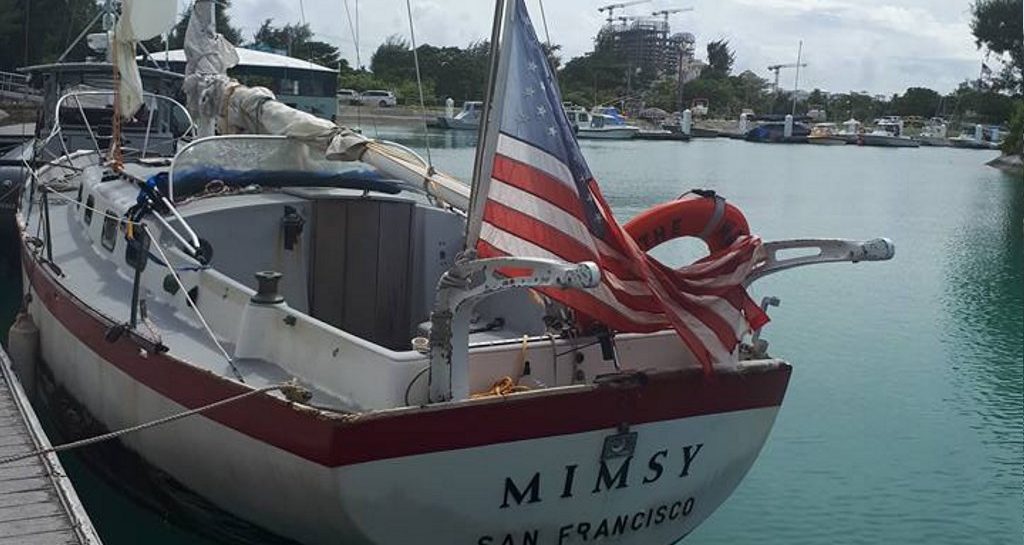 In a truly mystifying turn of events, Rimas has cheated death once again.

As you may recall, Rimas went missing at the end of July. His last transmission was at 00:49 GMT on July 31, 2017, near Rabi Island in Fiji. Many in the sailing community thought that he might have wrecked on Texas Reef, based on his heading at the time of his last ping. Others assumed that he was generally deceased. After eleven weeks with no communication, new information started to trickle in:

I have been in contact with Saipan Port Police, the Guam Coastguard and also the Saipan 24 hour TV News station and all the messages I have received “suggest” that it is indeed Rimas onboard “MIMSY” that has been towed into Saipan with a broken mast. More news to follow.

Before long, Sherri Riggs, a news reporter with KSPN2 in Saipan, Northern Mariana Islands, posted photos of Mimsy on Facebook, notably with a standing mast.

She also posted a video of Rimas, looking surprisingly healthy and well-groomed for someone who just spent four-and-a-half months at sea without adequate provisions (or even shade). He described receiving food, water, and batteries from a South Korean ship, which partially explains how he was able to survive. He was also prompted to talk about how once he got within radio range of Saipan, he refused a helicopter rescue so that he could be towed in by the marine police. This proved that beggars can be choosers: Rimas was able to select a specific form of rescue while still keeping intact his unsullied record of never entering a port under his own command.

He was at sea for approximately 137 days in total, initially tracking himself from Hawaii to Fiji via his DeLorme, and then without any contact for the last 78 days or so. Between Fiji and Saipan, he traveled about 2800 nautical miles, giving him an average speed around 1.5kts. He claims that he sought out Saipan on purpose, which makes sense since he has traditionally preferred American territories and their search and rescue capabilities, although he also claimed that his tiller was broken in Fiji and had no control of the boat, so, as always with Rimas, the details are open to speculation.

The word “mimsy” was invented by Lewis Carroll for the nonsense poem “Jabberwocky,” which appears in Through the Looking-Glass. The character Humpty Dumpty defines mimsy as a portmanteau of “flimsy and miserable.” Not a name I would chose for my own boat, although everything is through the looking glass for Rimas. On a purely human level, I’m glad that he survived. For the sake of his eventual rescuers, I hope that no one funds another voyage.