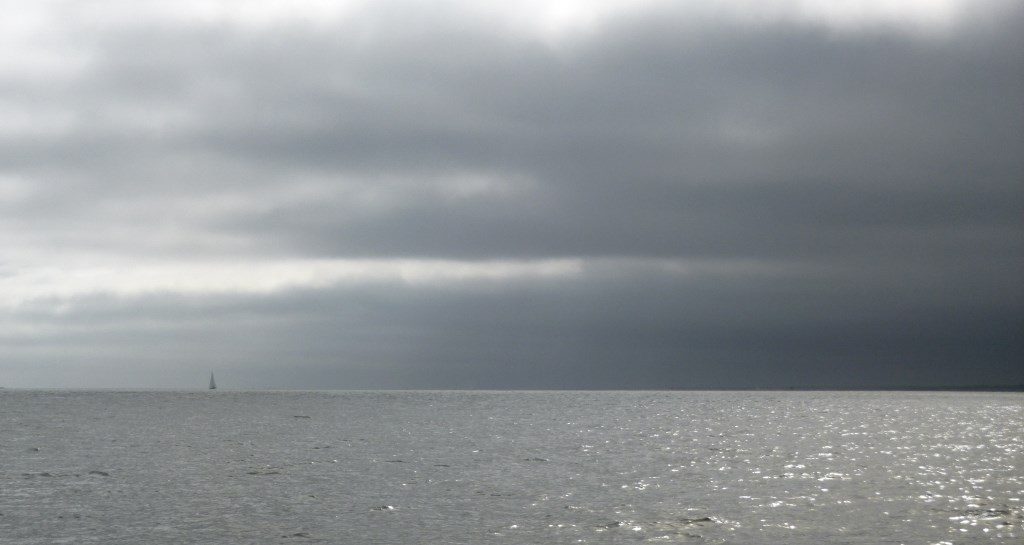 A picture taken in any direction would have looked like it came from a different day.

Behind us, the sky was foreboding. 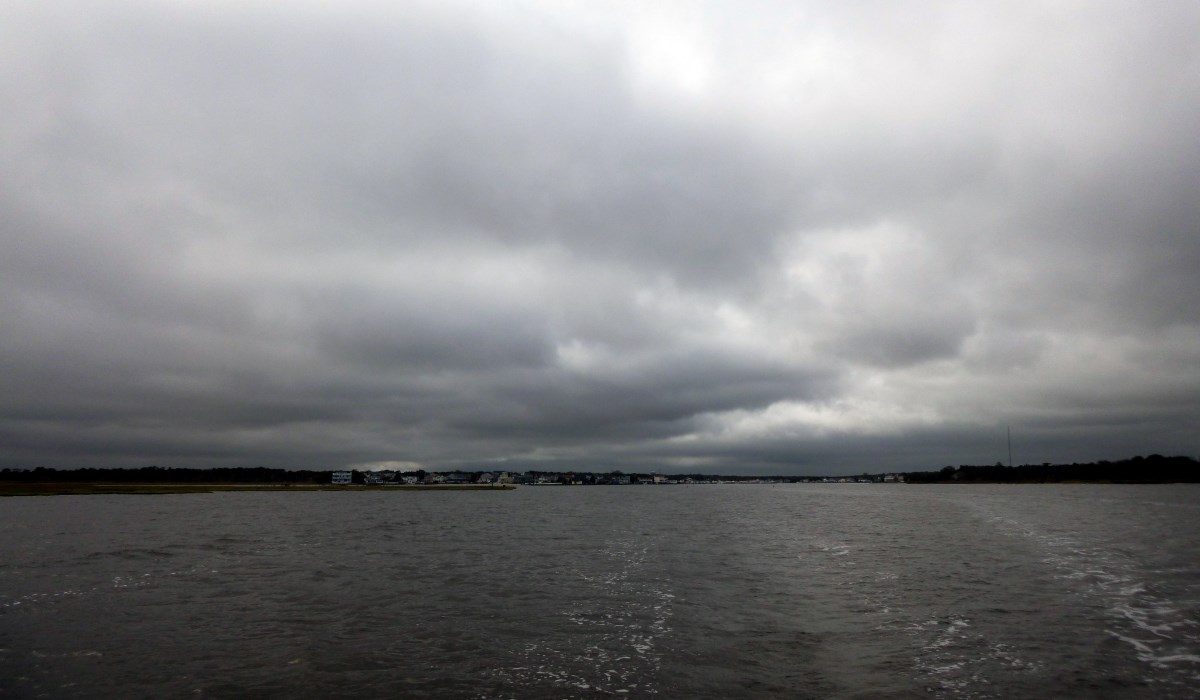 To the south, the thick clouds ended and blue sky could be seen peeking through. 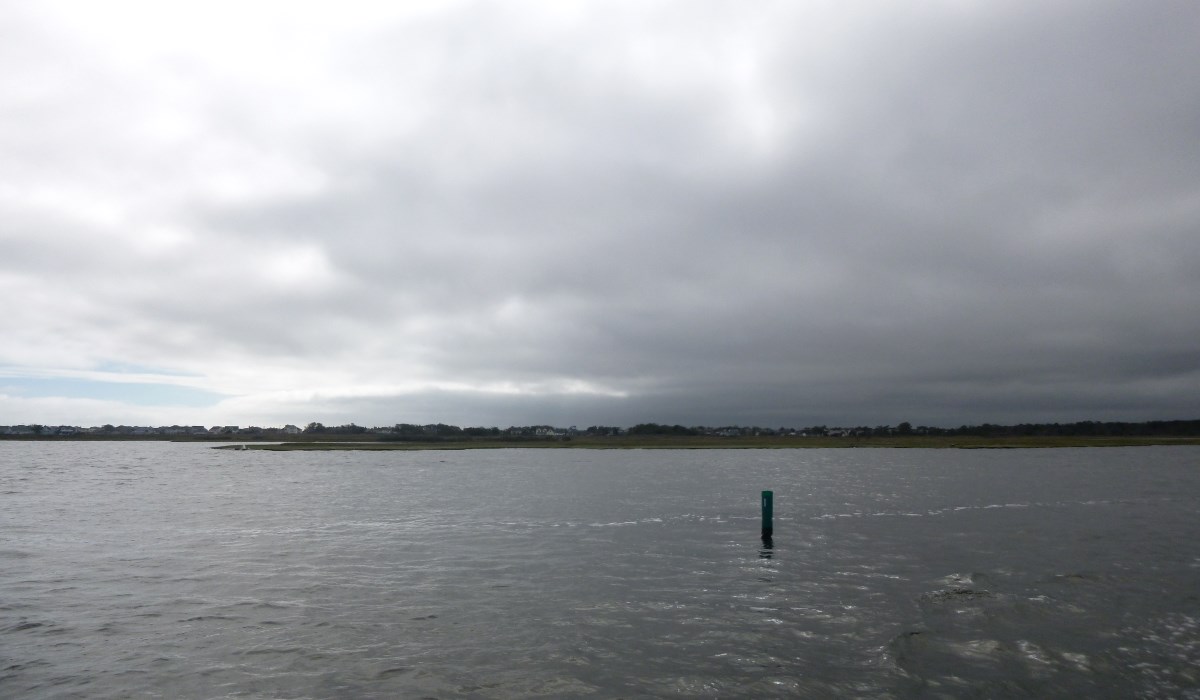 Ahead of us, it was mostly clear, with a thin band of low clouds far out over the ocean. 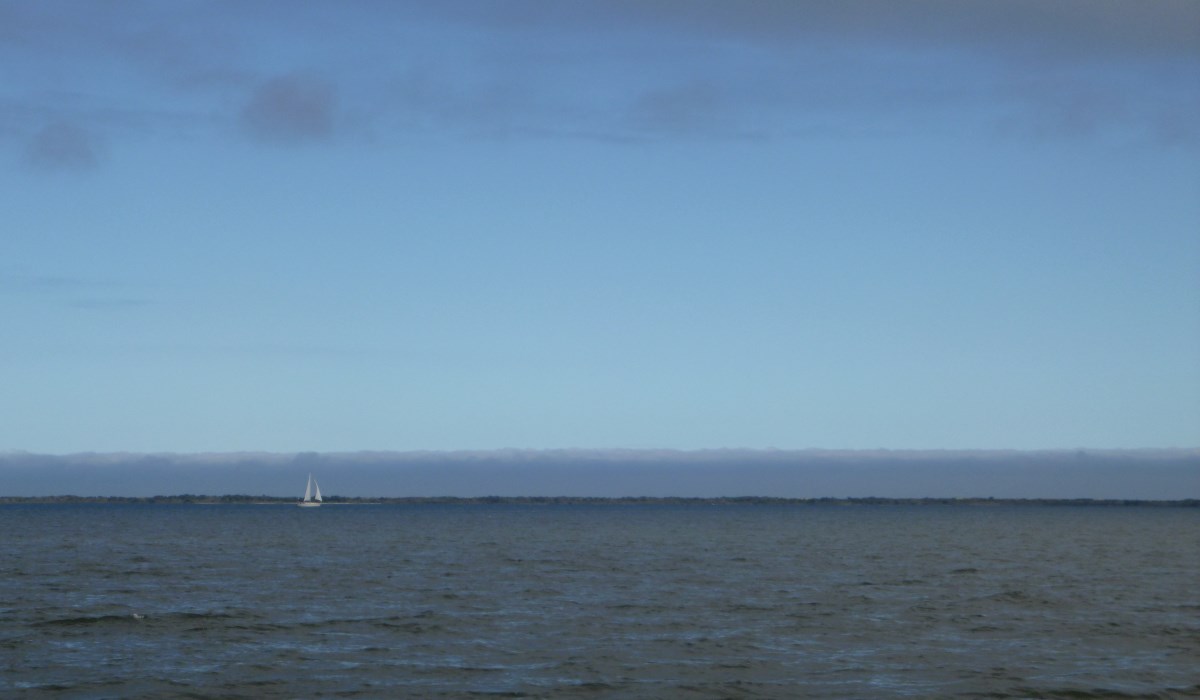 We were apparently on the right heading.

It was warm enough for short pants, although I asked Jen for my rain jacket the first time it started to mist. There was almost no wind, and the sensation was halved since we were silently gliding along with it. I roamed around the boat, messing with the whisker pole and taking pictures from angles that I don’t attempt when the bay is blowing her typical 20kts. 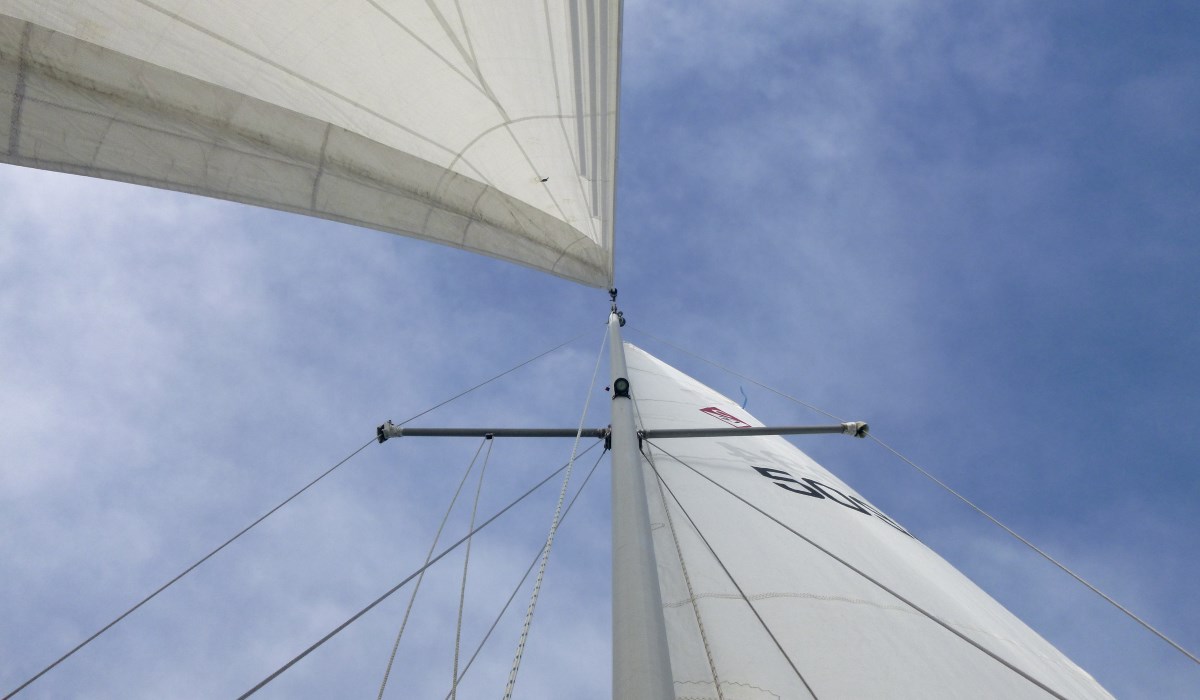 We were headed to the Captain’s Inn in Forked River to meet up with seven other boats from our club, although we were early and continued on past the marker that indicates the entrance to the river.

We slowly eased down toward the inlet, where we turned around and started tacking our way back. Sailing with the wind in our faces gave more of a perception of speed, although the conditions were still light and dwindling. I was considering sailing up Forked River, but as we approached the mouth, the wind fell to almost nothing. I don’t know if it just stopped or if were too sheltered by land, but we dropped the sails and started the engine. 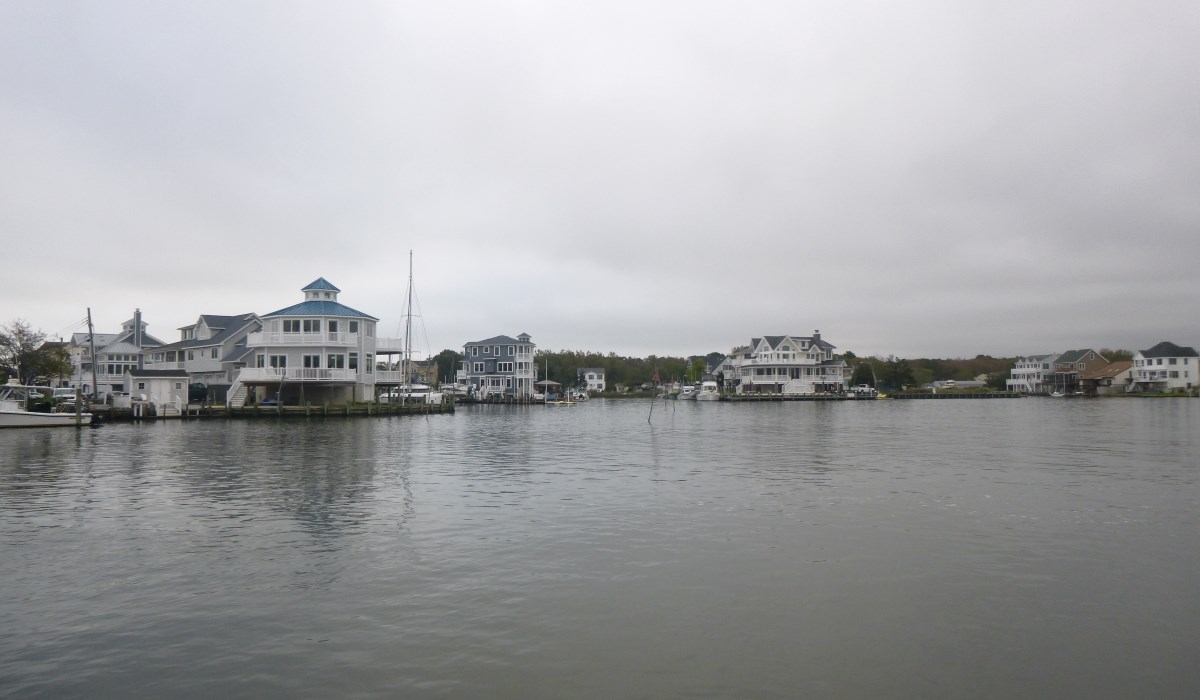 Several boats from our club had already arrived at the Captain’s Inn. It didn’t look like there were spots next to them, so we docked near the pavilion. Coming into strange docks without lines to grab can be tricky, but with no wind or current, we gently drifted into the slip without issue. The dockmaster did tie one of our bowlines to the top of an electrical post, which I discreetly moved after he was gone. We helped the last couple boats tie up as others arrived by car, and then started tailgating in the parking lot while we waited for our reservation. When the time came, we were seated at one big table (for twenty-three), and were treated to an excellent meal, as we’ve come to expect from the Captain’s Inn. After dinner, we moved to the lounge for live music, conversation, and märzen on draft.

We woke up early after a night of relatively peaceful sleep. I had some breakfast with the club while Jen converted the boat from sleeping mode back to sailing mode. There was no wind early, but it by noon it was gusting to 20 and we headed out for another sail. The wind had shifted around almost 180º and we could have had a nice downwind run back to Cedar Creek, but we opted to sail into it at first. We investigated a couple weird things that we’d noticed the day before, like an anchored barge and an area near shore marked off with red buoys, but we didn’t learn anything about what was going on. 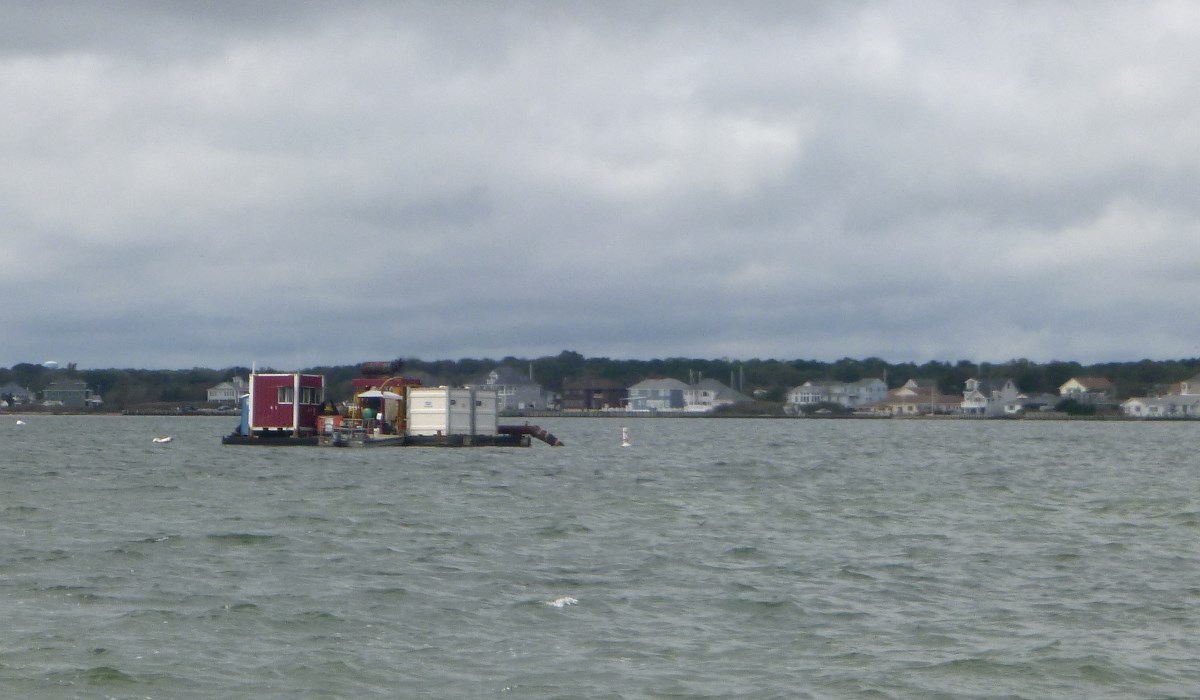 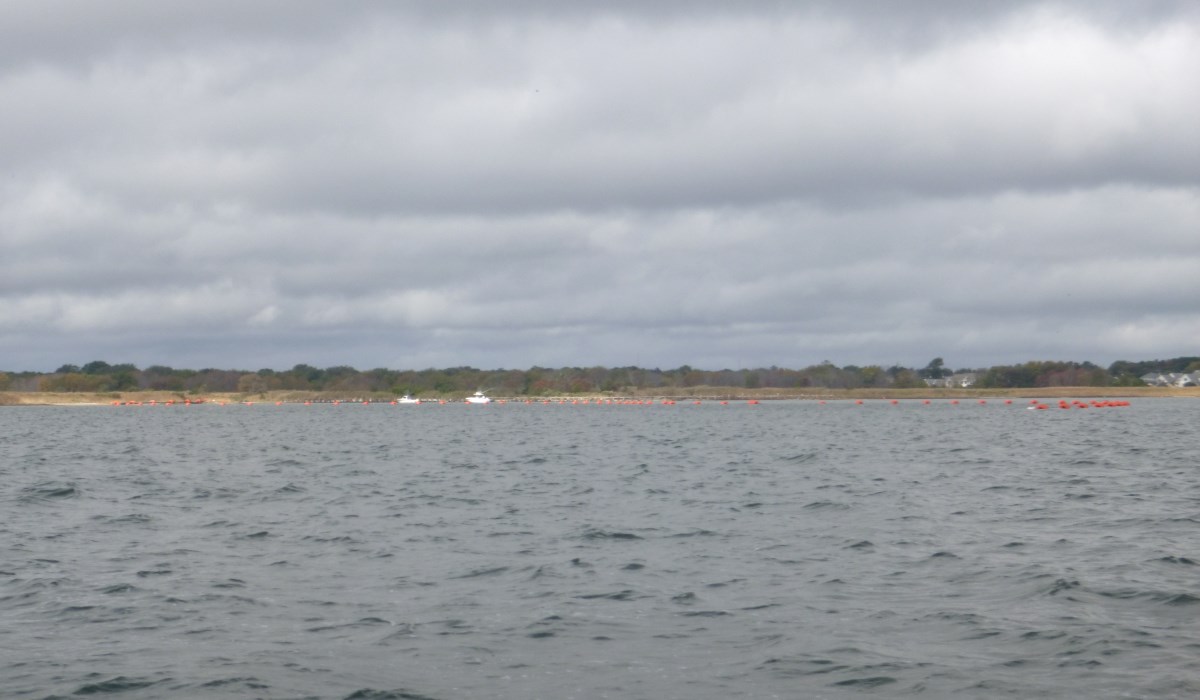 We probably should have reefed, but once we made it to BI, we turned around and things were calmer off the wind. We jibed our way back through broad reaches until arriving at our home creek and heading in.

Before we became members, this trip used to be our club’s annual meeting. At the dinner, officers were elected, awards were given out, people who ran into fixed markers were publicly shamed, etc. At some point, the annual meeting moved to January, to give sailors a bright spot in the long cold winter to reconnect with their sailing friends. I can see the advantages to both, but I’m glad that we still do the trip to the Captain’s Inn. October is some of the finest sailing on the bay, and if you’re willing to roll with the sometimes-unpredictable weather, an easy trip one creek to the south is a nice way to round out the season. Not that we’re quite done sailing yet…

More photos can be seen in the gallery here.