I always try to read the sky when I’m out there. I barely know anything about clouds, but I’m forever staring at them, attempting to correlate what I’m seeing with the conditions.

On our way out of the creek, Jen asked if it was a time for the “fisherman switcheroo.” Several boats had gone past our transom while we were preparing the boat, and once we were motoring out, we realized that we were in a parade of fishing boats heading in and out. I imagine it had more to do with the mild temperature and light wind. I would have raised the sails in the creek and sailed out, since the wind was behind us from the west, but we never had a chance to turn around and come head-to-wind to raise the main with all of the traffic.

Instead, we motored well past the mouth of the creek, seeking some open water to turn around and raise the main. We then turned around again and unfurled the jib, making our way south toward 40.

The clouds were high and mottled when we left, allowing in plenty of sunlight. Winds were a little fluky, mostly from the west but unstable in both direction and speed. 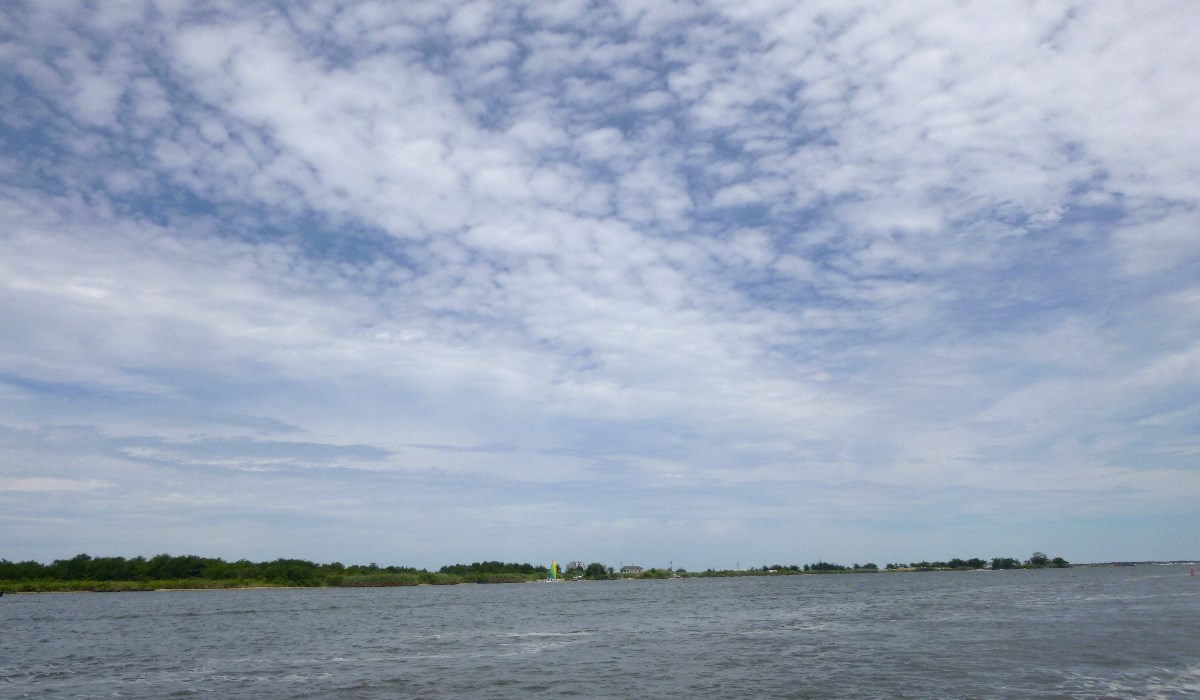 It’s so unusual for the winds to be from the west, I had to ask Jen to make sure that we were on starboard tack—we usually start the trip down the bay as the give-way vessel with a sea breeze from the east. I was curious about it because two sailboats were bearing down on us from the opposite direction. I stood on and let them figure out how to get around me. The Catalina 387 passed us to starboard and the Hunter 410 passed us to port.

Although they passed us simultaneously, the photos look like they were taken on different days. The clouds to the east were broken and it looked mostly sunny… 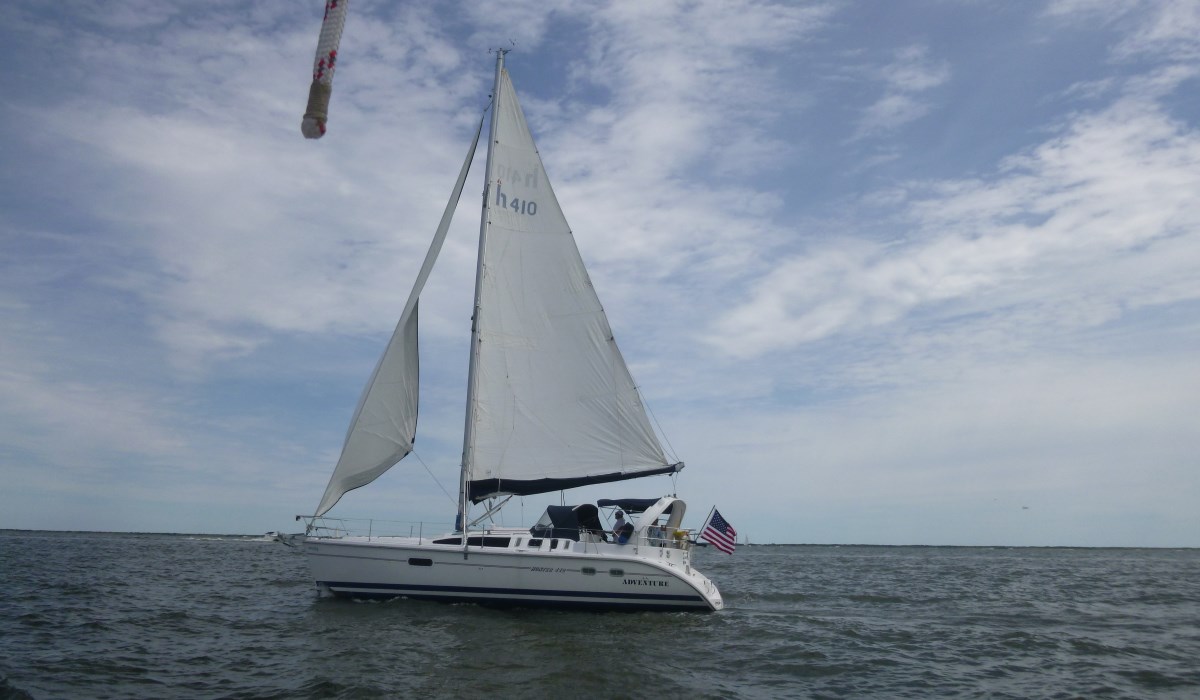 …to the west, it looked almost overcast, with some low-hanging fluffy cumulus set against a backdrop of higher-altitude cover. 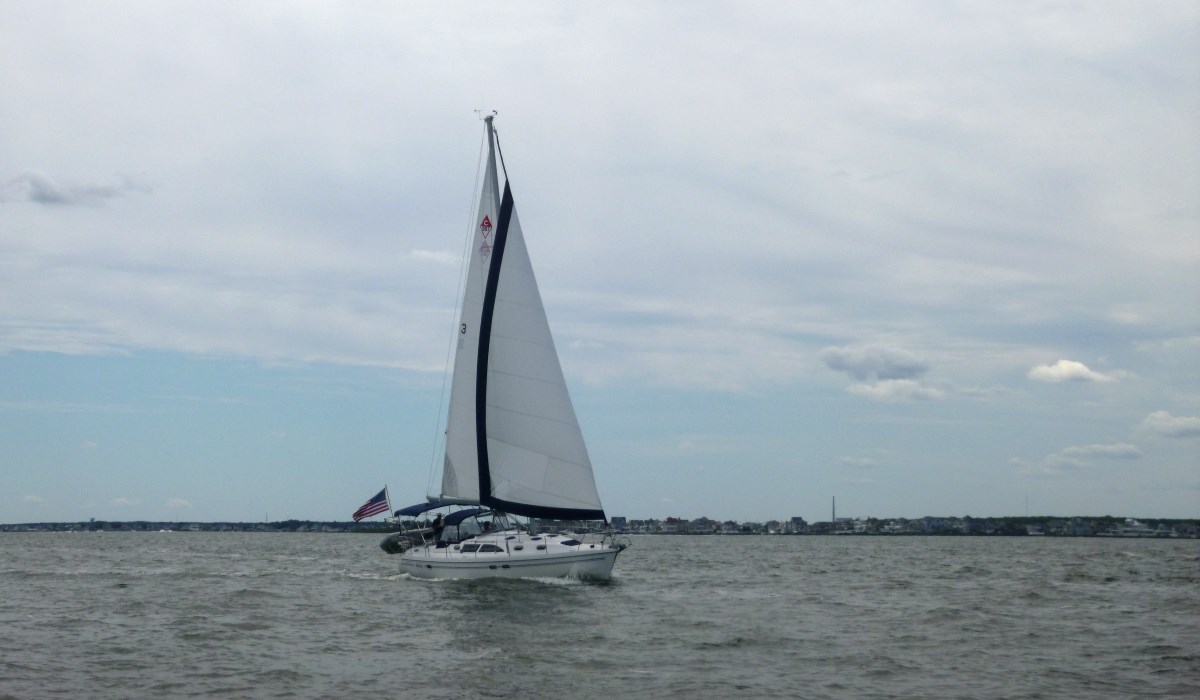 We passed a sailboat sailing very slowly with two men standing on the swim platform. They were fishing off the back of the boat, as if that were a thing. I fully expected them to fall off with the next powerboat wake. We passed another boat that needed to hoist her main another 18 inches. The leech was dangling haphazardly as the whole sail flogged awkwardly, to the point where Jen (who is not necessarily a connoisseur of sail trim) was openly laughing at them.

We sailed south beyond the inlet and tacked around. We passed an Island Packet flying only a jib and a Beneteau 331 that appeared trimmed for close-hauled while sailing a broad reach. The sky behind them looked somewhat ominous, with bands of thick dark clouds, but the radar showed nothing in the way of rain. 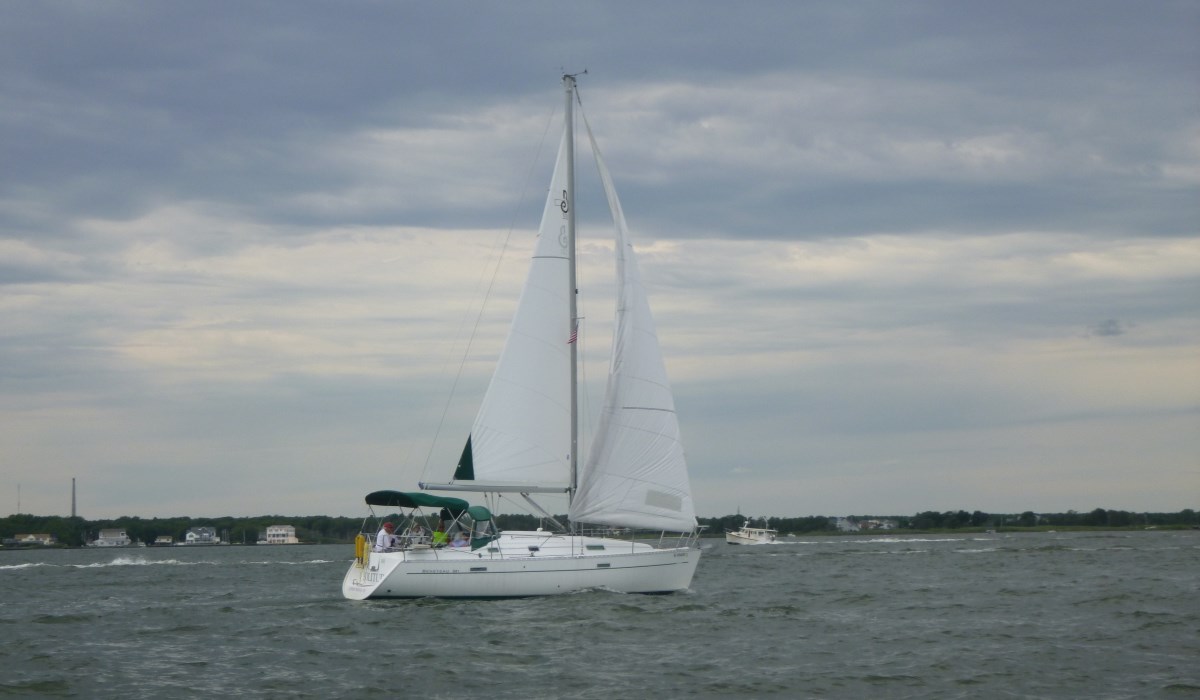 The only boats that passed us were powerboats, including the 43′ wooden trawler Bad Donato V. We saw her once before, on one of our many failed attempts to go to Beach Haven. I’m not into powerboats, and I certainly wouldn’t want to maintain a wooden one, but she’s got undeniable character. 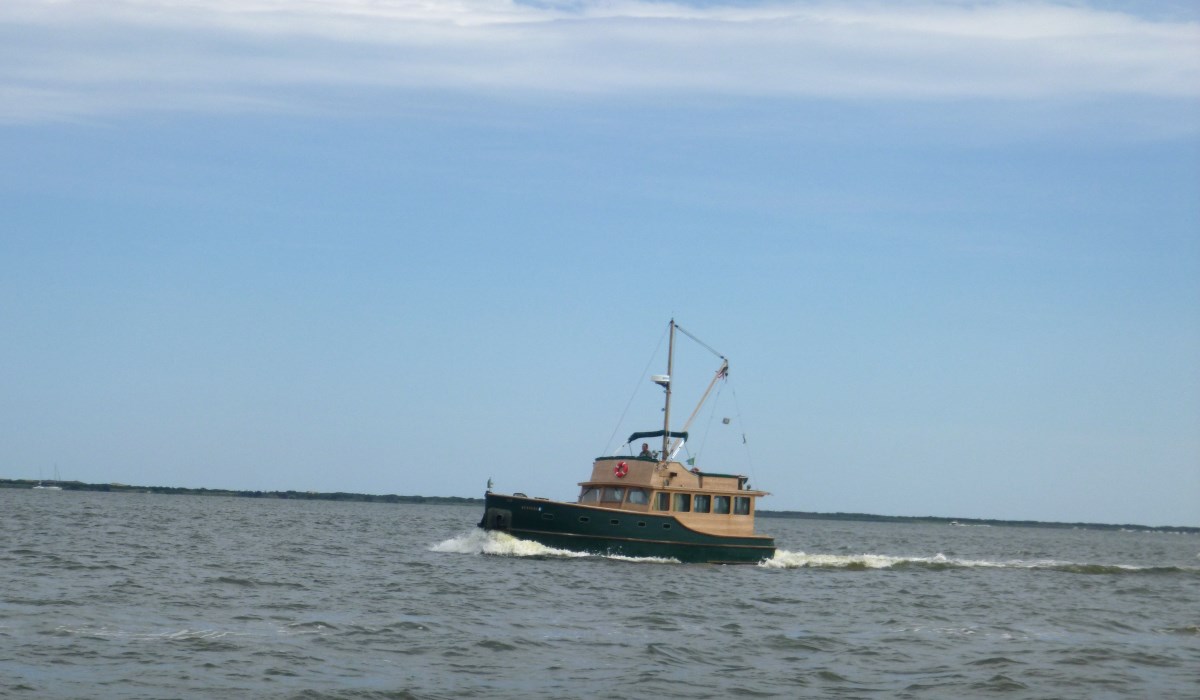 Of course, the sky behind her looked clear and blue, with only a thin band of clouds.

We continued on past the creek, not exactly ready for the day to be over. At 39, there was a small armada of catboats making its way south. We picked our way through and then tacked around.

We furled the jib as we neared the Cedar Creek Channel, and started the engine just before turning into the wind to drop the main. The last boat we passed was a Cape Dory Typhoon Daysailer. I don’t usually like to pass sailboats in the channel, but their little kicker outboard was no match for our 13.5hp of diesel fury and I like to let our engine actually get up to operating temperature at her cruising RPM.

As we motored toward the shelter of land, the wind became calmer. The darker clouds that had been in the west were gone, replaced with a mishmash of irregular clouds perched over Lanoka Harbor. 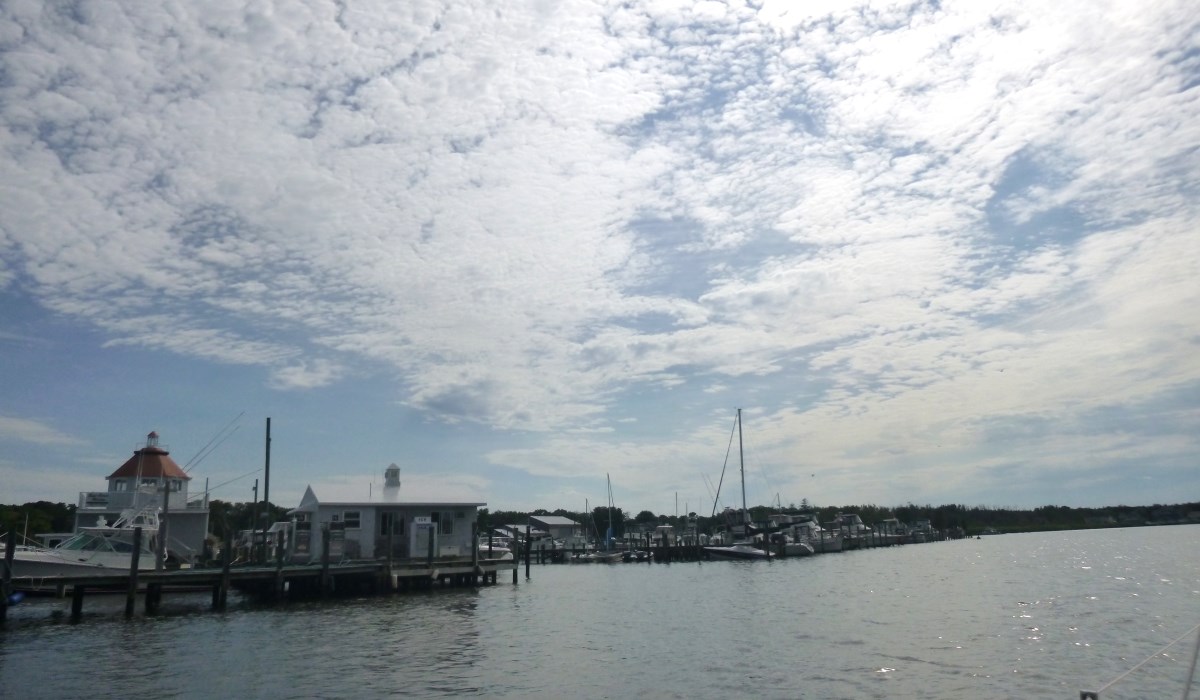 The wind had remained a gentle 8-12kts throughout the day. There were a few spells of almost no wind, and I half expected the direction to be different when it turned back on, but it remained primarily from the west. I have no explanation for the ever-evolving sky throughout the day, other than to say that the forecast for tomorrow is terrible. I know the names of some of the clouds, and I’m familiar with some of the nautical weather rhymes, but I still have very little feel for predicting the weather based on the sky beyond the obvious thunderstorms. It would be pretty salty to be able to look out at the sky and say “Mmm. Weather’s changing,” or whatever, although sometimes I think I’d need another lifetime of watching.