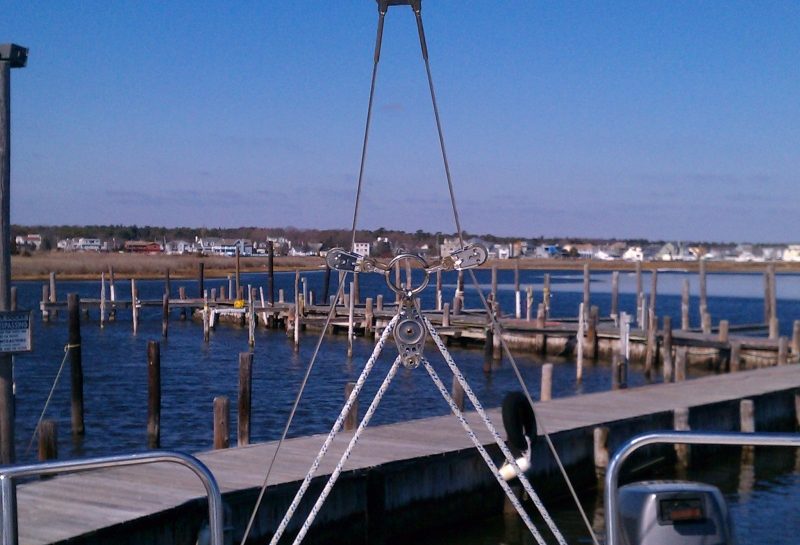 Damn, winter is lame. The closest thing I can do to boating right now is to troll the chandleries’ websites and dream about how we can improve our boat. We have several projects planned for the early spring, so I thought I’d jot down my ideas here.

The backstay is the wire that connects the top of the mast to the transom to keep the mast from falling forward. On some boats, including Fortuitous, its tension is adjustable. I suppose that on some level all shrouds and stays are adjustable, but that’s more of a fine-tuning thing and it’s typically done relatively infrequently and at the dock. The backstay, on the other hand, is meant to be adjusted while sailing, depending on the conditions and what you’re trying to accomplish. My friend Alex made a really handy video on the subject: click here to learn more. It’s worth a watch just for the Portuguese accent.

The backstay adjuster on our boat is an older design and kind of overly complicated for how little it does. It’s also in disrepair; the sheaves (sheaves are the grooved wheels on pulleys) are disintegrating, and I’ve lost too many sailing shirts to all the random meathooks and cotter pins on it. The plan is to cut the backstay off above the turnbuckle and add a new all-rope adjuster. We’ll put a 4:1 block system on one of the chainplates, and a 5/16″ line will go from it, through a 60mm Lewmar Synchro at the end of the stay back down to the other chainplate for a total of 8:1 purchase. It should weigh less, work better, and look awesome. 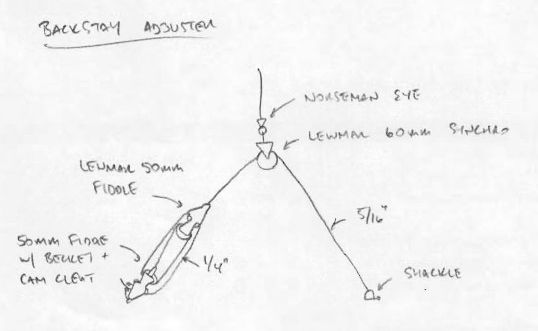 When sailing, our boom is held up by the mainsail, but if we were to lower the sail the boom would just fall into the cockpit. We do have a pigtail, which is a short wire connected the backstay that will support the boom when the boat’s at rest. It’s less than a foot long though, and can therefore only be used when the sail is down or the boat is pointing directly into the wind so that the boom is flying straight aft. This poses a few problems. For example, we can’t really put a reef in when sailing without the motor, and we’d prefer to avoid dropping the boom on people’s heads.

Enter the topping lift, which is a line that will hold the boom up all the time. The super-sailorly way to add a topping lift would be to connect a line to the aft end of the boom, run it up through a sheave at the masthead, then down the mast, through a deck organizer and back to a cam cleat or rope clutch on the cabin top. That would allow us to adjust the topping lift while sailing, so that we could add draft when sailing downwind in light air, for example. Unfortunately, we don’t have a spare sheave at the masthead, and the idea of drilling holes in my cabin top for more cleats/jammers is horrifying. I’m planning to take it one notch down from super-sailorly: tie the line to the masthead, run it through a cheek block on the end of the boom (which we happen to already have) and tie it off to a cleat on the boom. That will allow some adjustment, though not when the boom is played out while running. 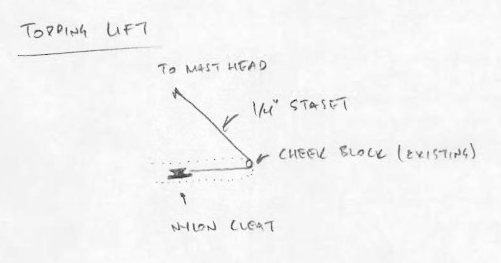 This is kind of a novelty thing, but while we have the mast down, we’re going to add a flag halyard. The most revered position for a flag on a sailboat is the stern, and for that reason, boats fly their nation’s ensign from the backstay, or as Chapman’s would have you believe, form the “peak or gaff if so rigged or 2/3 up leech of mainsail or equivalent position along backstay.” The second most revered place, however, is from the starboard spreader. It’s also where we’d fly the yellow Q (quarantine) flag if we’d just arrived in a foreign port and needed to clear customs, and where we’d fly the courtesy flag of that country once we were admitted. Perhaps more realistically, it’s where we’d fly our sailing club’s burgee. Chapman’s will tell you that it goes on the masthead, but…seriously? I don’t have a yacht boy on staff to shimmy up my spruce mast and place it there after I’ve fired my cannon and made colors at eight bells. 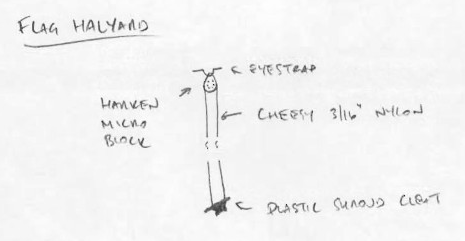 At any rate, my halyard will be a rather low-rent affair consisting of an eye strap on the underside of the spreader, a Harken microblock, and a loop of cheap nylon line tied off to a shroud cleat. The whole dissimilar metals thing drives me crazy with this (aluminum spreader + steel hardware + salt air = aluminum eating battery) and I’ve vacillated between attaching the eye strap with aluminum pop rivets or cheesing out and just using a couple zip ties. I’m currently leaning toward zipties and some kind of insulating tape, because I can live without the flag halyard, but not the spreader.

N.B. all Chapman’s jokes herein truly come from a place of love.