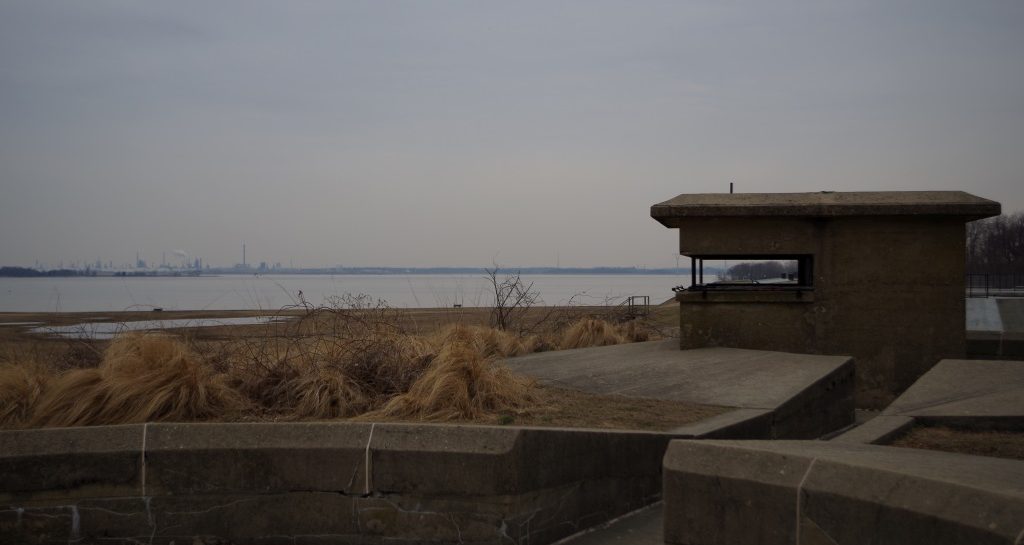 I have been disappointed with the quality of our photos for a while. I learned everything that I know about photography (which is, admittedly, not much) on a Pentax K1000—an entirely manual 35mm film camera that can also be used to peen steel in a pinch. I was following the advice of Glen E. Friedman, who shot album covers for the Beastie Boys, Public Enemy, and Black Flag, among others:

If you want to be a photographer, buy a Pentax K1000, read the instruction manual that comes with it, front to back as many times as you need to so that you know how that camera functions and how lenses work. If you know how your medium works and how to use it, it should be in your blood, in your heart, in your soul to know what to do or to figure out what to do after you’ve played with the materials long enough.

I love that camera, even though I got it about 20 years after its heyday. We only grew apart because dealing with film is a drag in modern times, and buying it and getting it competently developed were expensive and annoying.

We’ve been through a string of point and shoot cameras, including one that ruined all of our pictures from our trip to Atlantic City when it got a piece of fuzz somewhere in its internals (which are completely inaccessible to human hands) and our current waterproof one which I consider just ok—its pictures aren’t that much better than a modern telephone’s, but the waterproofness is a nice touch on the boat.

In order to be able to use my old K1000 lenses, I stuck with Pentax for the new camera and got a new Pentax K30, a weather resistant 16mp digital single-lens reflex (DSLR). 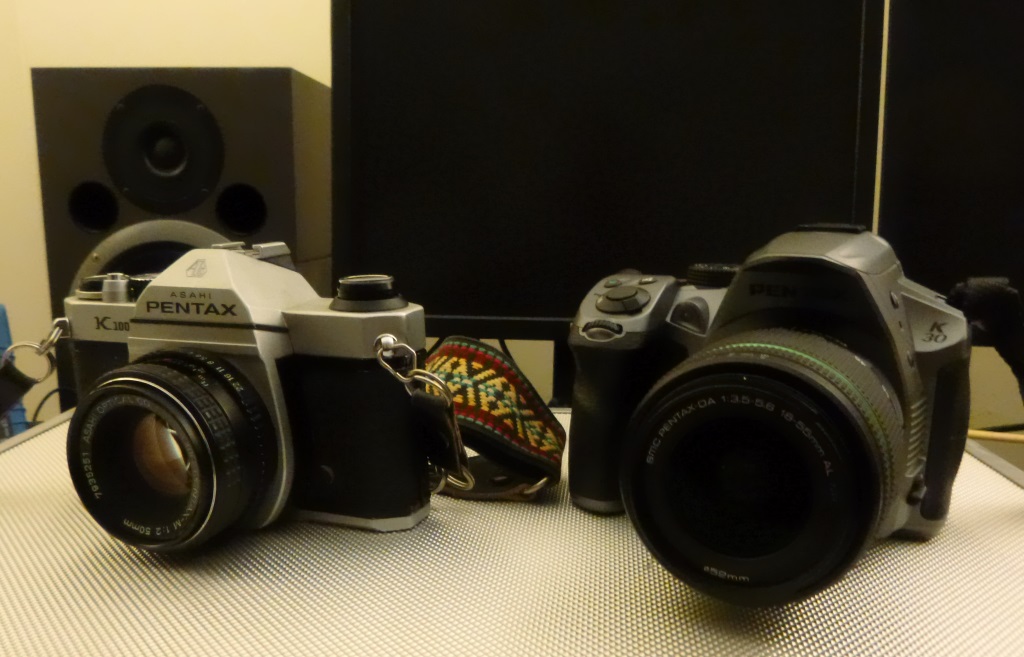 Of course, the problem with taking a picture of your two nicest cameras is that you have to take it with, at best, your 3rd string camera.

Pentax is kind of an oddball in the camera marketplace, but my needs are still fairly modest, I think it’s a good value, and being able to use my old glass is a big boon. We’ll see how it goes. My initial feedback is that it’s super complicated, but I guess coming from a K1000, so are most types of can openers.

To test it out (and re-learn what the hell “aperture” is) I tried to sneak in a little photo safari this past weekend. There was a threat of 8-14 inches of snow inbound so I didn’t want to go too far, and the nagging overcast didn’t necessarily make for the most photogenic of days, but I made it down to Fort Mott State Park on the Delaware River. 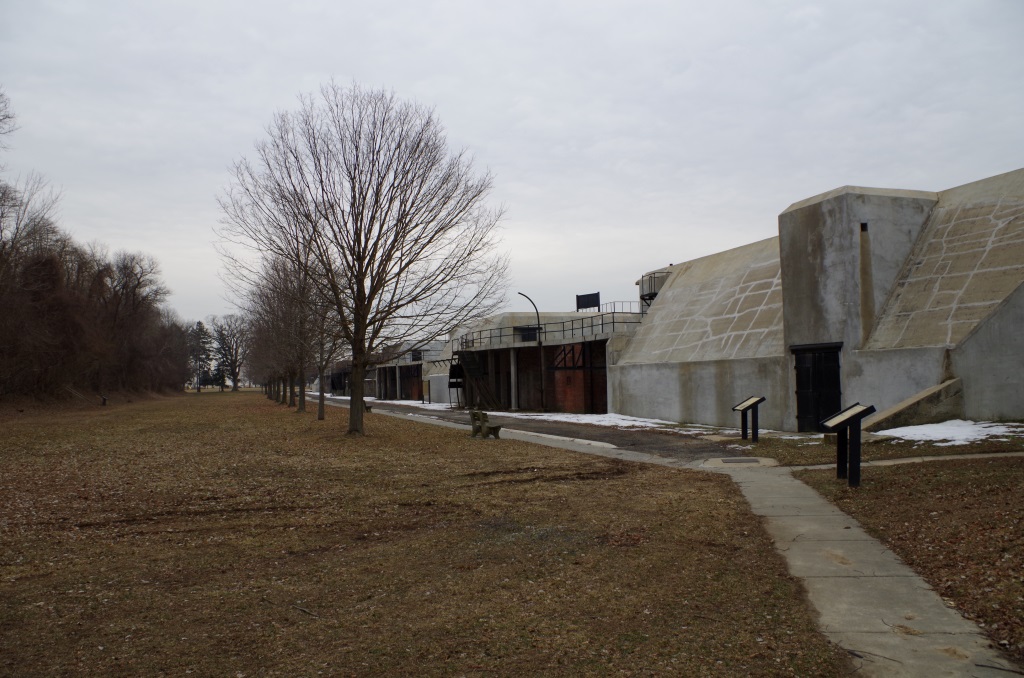 Fort Mott was built in the 1870s to bolster Fort Delaware and Fort DuPont in the defense of Philadelphia, which was fortunately never required. There’s a dirt parapet, dotted with observation and fire control stations overlooking the river. 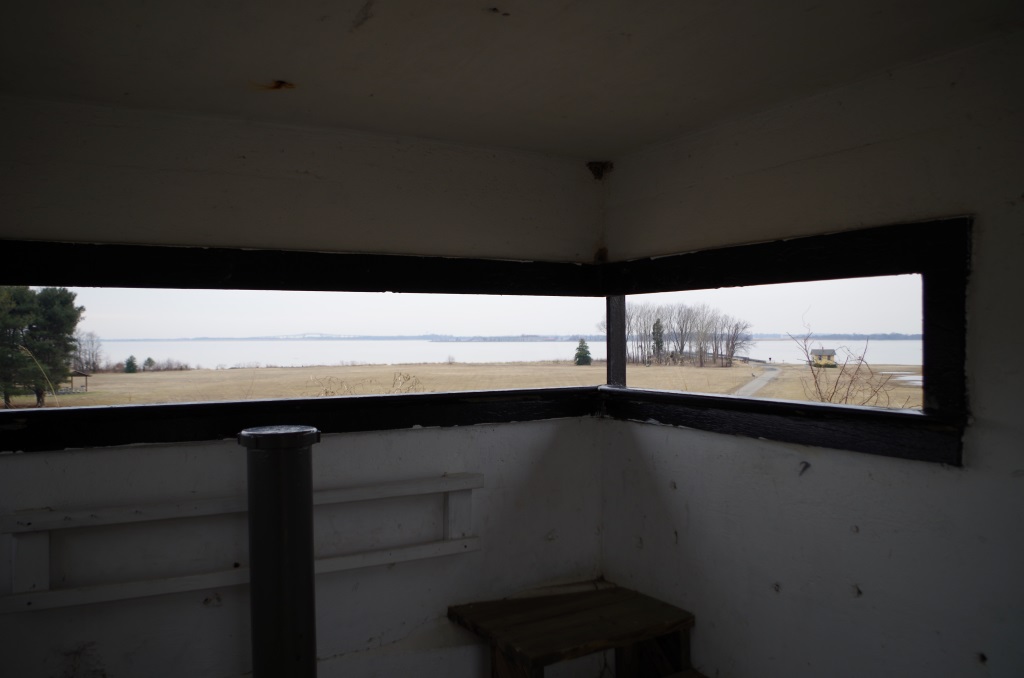 Behind the defensive wall were the gun batteries, which used to hold the “disappearing guns” that could be lowered for protection during reloading. The guns are long gone, but the heavy anchors where they were bolted are still there. 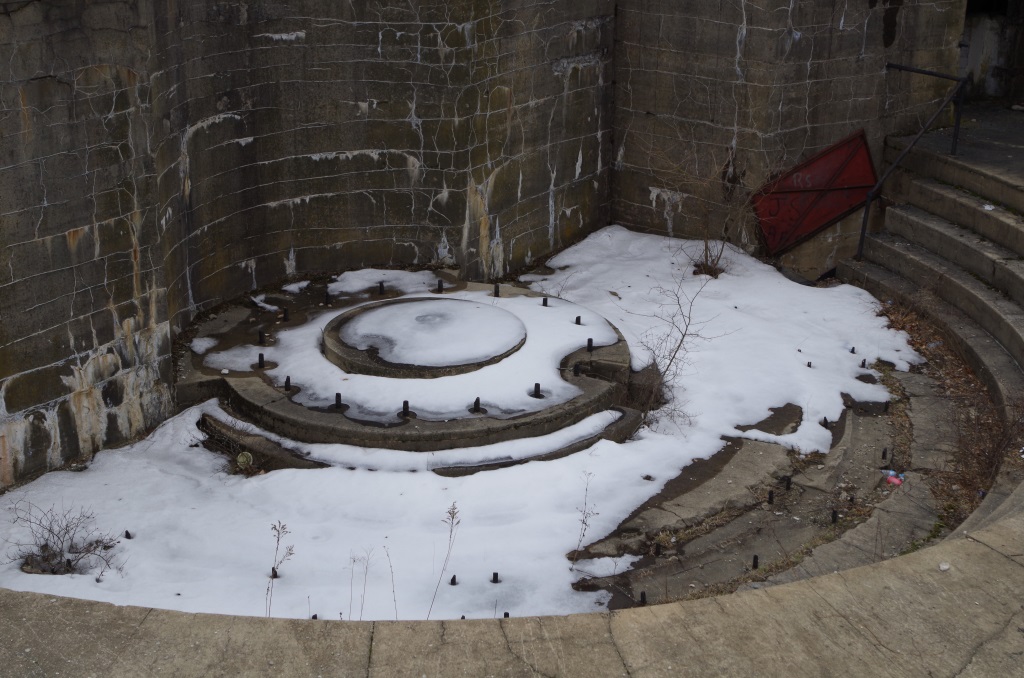 There are also some munitions magazines and things, variously built and abandoned throughout the fort’s history. And one wizard den: 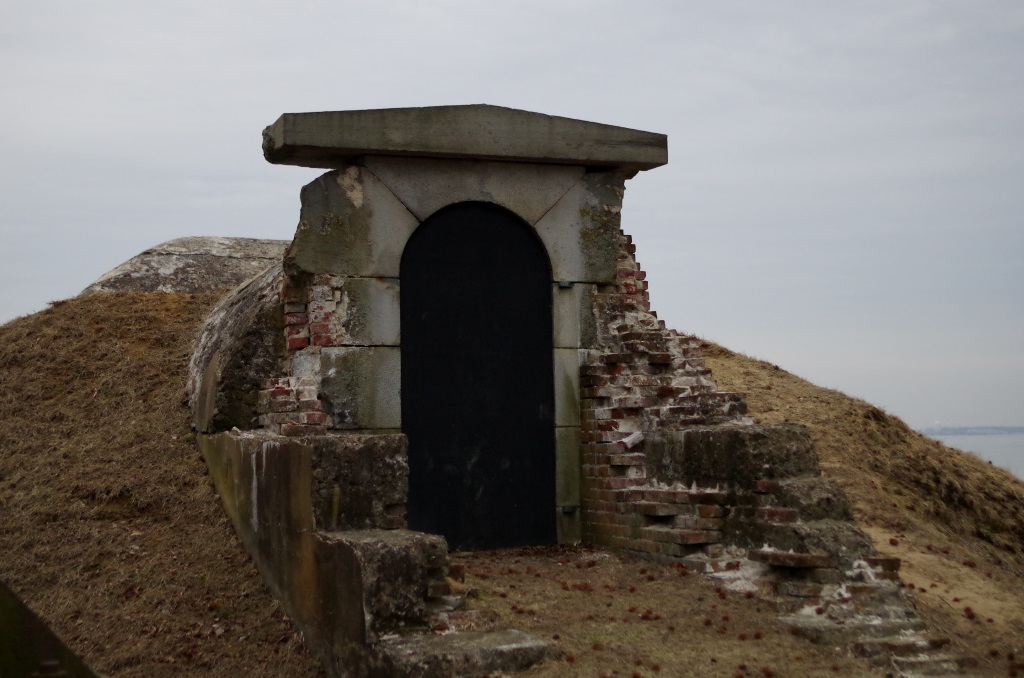 After some establishing shots, I attempted to reacquaint myself with taking “real” pictures. I’m not entirely sure what the distinction is—I can have a hard time reconciling photography as art, since the difference between an artistic photo and a dumb snapshot is sometimes accidental—but whatever the delineation, I put the camera through its paces in full-manual mode. If I were a first year photography student, I might say that I was “playing with texture and the interplay of light and dark,” or something, but I was mostly trying to figure out what the buttons do. 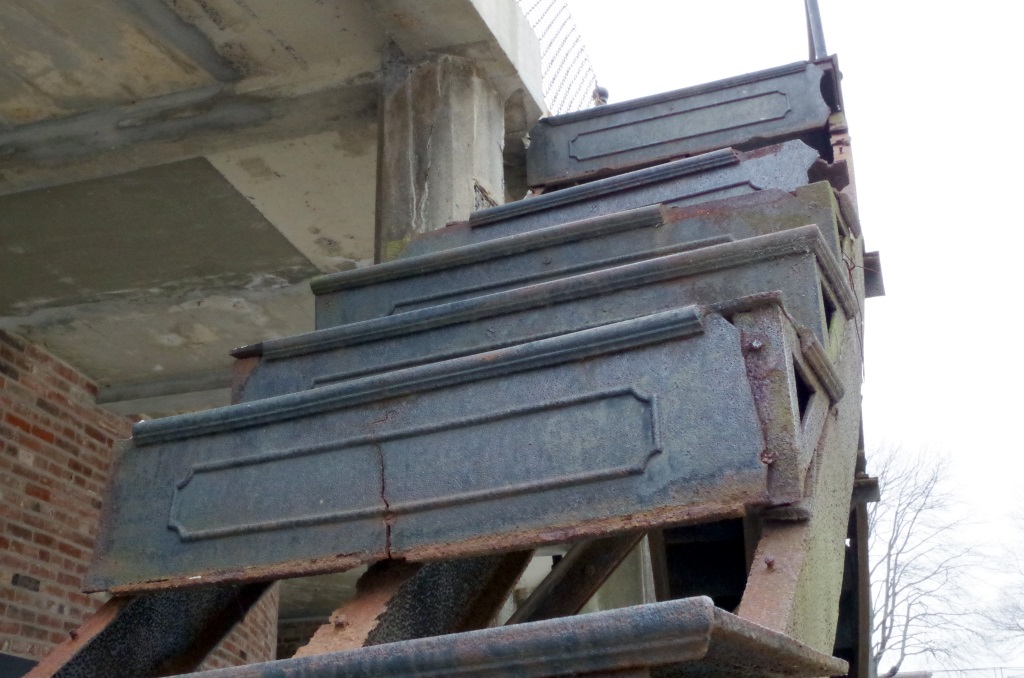 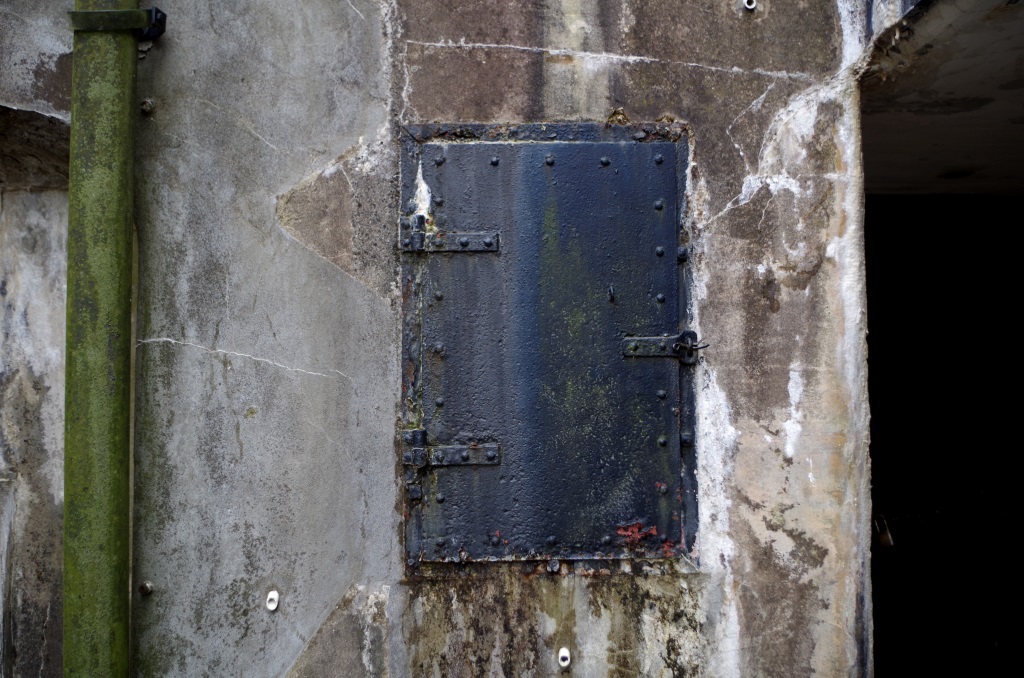 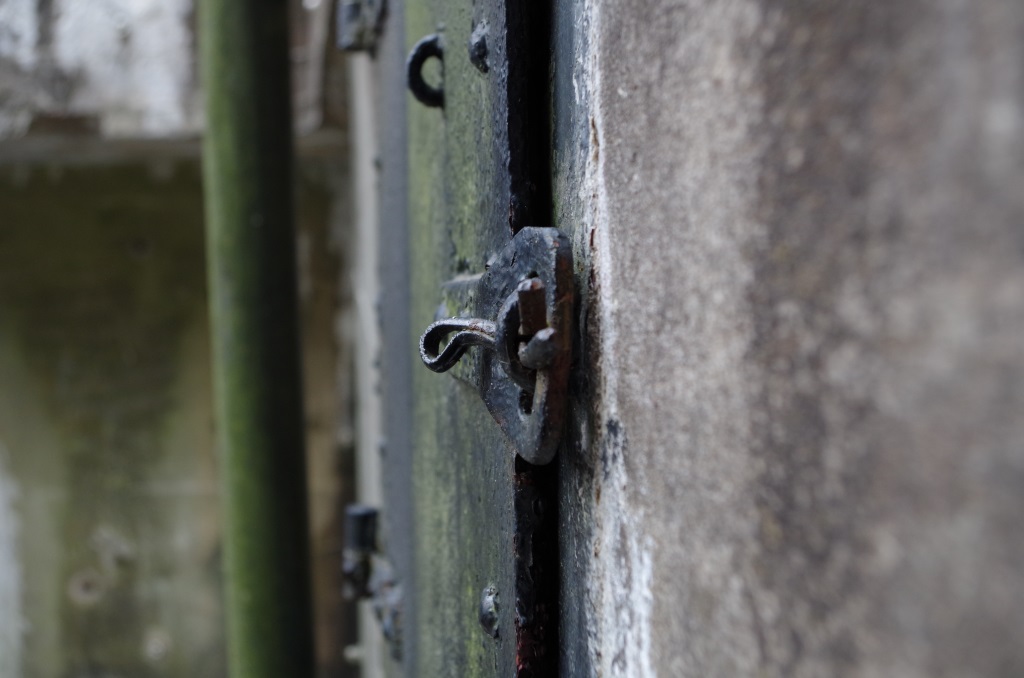 I don’t know. Some of them came out alright. I have a lot more reading to do before I even know what the thing is trying to tell me. It basically works though.

One final thought before I’m done with picture time:

I was born in the Deep South. Of New Jersey. I didn’t get NJ jokes until much later in life, because almost all of them are directed at North Jersey—large swaths of which are admittedly a cesspool. I don’t think that people have an appreciation for just how rural South Jersey is, and took a few quick pics along the way to try to demonstrate. 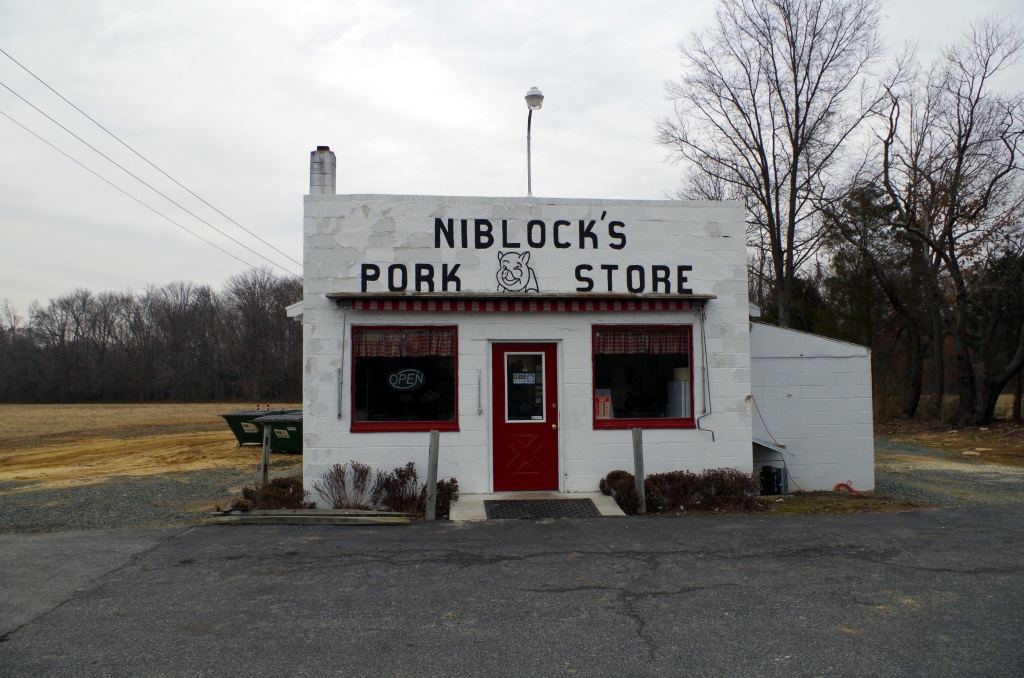 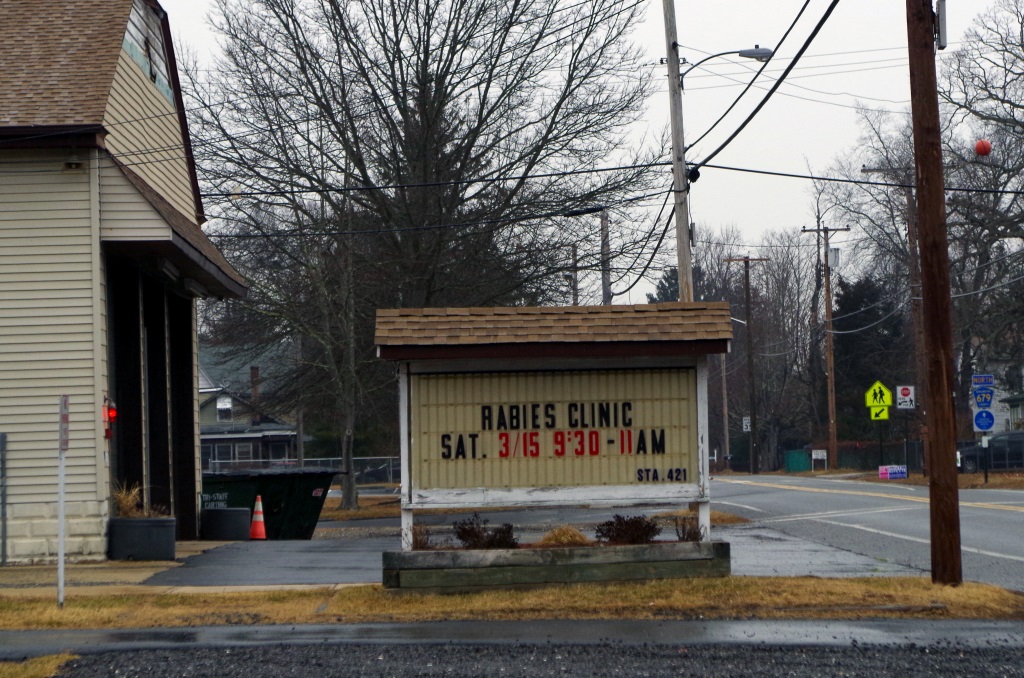 I’m not sure if this is advertising a short course on the ins and outs of hydrophobia, or if they are setting up a triage point for the rabid.

The snow held off for the duration of my photo odyssey, and we wound up with “only” 4-5 inches instead of the predicted 8-14 (although that was still enough to officially call this the region’s third snowiest winter in recorded history). I hope to eventually be able to take some pictures of blue skies and boats floating in liquid water.