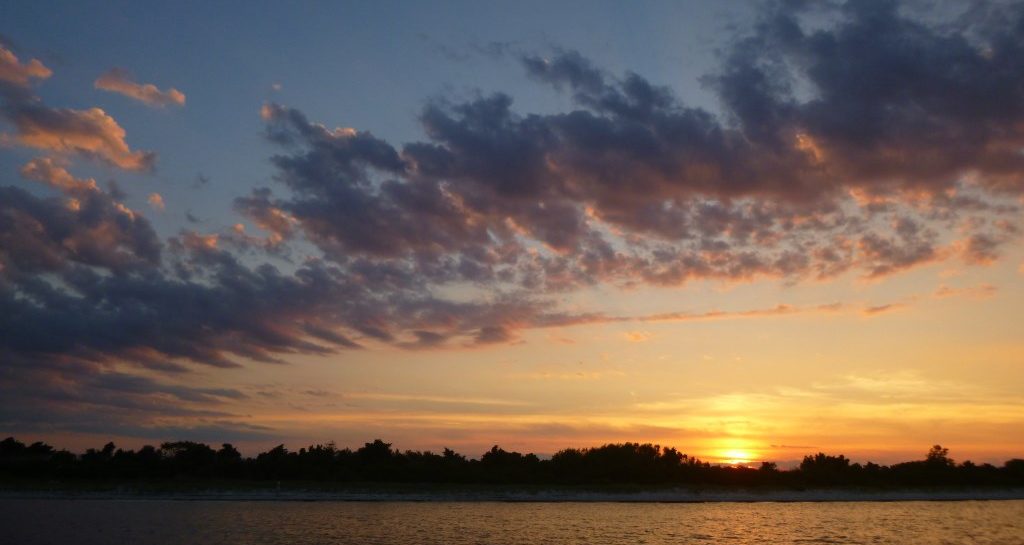 I arrived at the marina ten minutes before the captains’ meeting for Saturday’s Windjammer race, unsure if the foreshadowing was indicating that things were going unusually well or just that the world was out of order. Our Race Committee had incorporated our race into the Summer Sailstice, which is an annual celebration of sailing on the weekend closest to the summer solstice.

According to their marketing materials, the mission of the Sailstice is:

‘Host a spectacular weekend uniting and bonding a critical mass of sailors worldwide in a common, publicly visible, inspiring event to demonstrate and celebrate sailing resulting in a significant, positive impact on participation.’  And, like sailing, have fun doing it!

I had been warned that this would be a “fun race,” but had no idea exactly how “fun” it would be. The format included starting your engines (!) at noon, bumper-boating your way out of the marina, motoring the length of the creek, turning off your engine by the last set of markers, then sailing down to BI and back—about 10 miles of sailing. The finish line was from marker 40 running due east, where we were to record the time of day as our finish time.

Jen wasn’t feeling great when we woke up and had bailed on racing. Fortunately, I had Sailor Steve inbound, but upon hearing the racing rules, I became a little embarrassed that I’d invited my Tuesday night racing skipper to something racing-adjacent. The upshot was that the weather was damn near perfect. 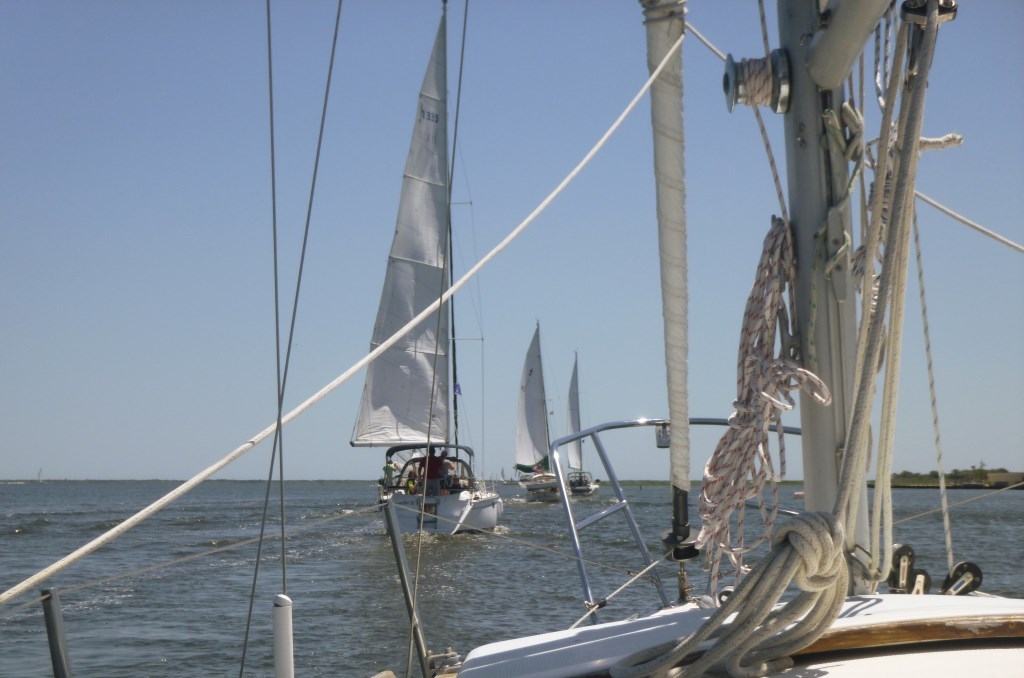 It was warm but not hot. The wind was moderate and steady out of the south and southwest, running 10 or 12kts and building slowly throughout the day, making for an even more casual race. I was worried that we’d forget something or have trouble getting the sails up, since that’s mostly Jen’s department, but we hoisted the main in the creek and unfurled the jib between the last couple sets of channel markers without issue. As the promenade started to break up and people switched from power to sail, we began easing away from the pack, initially passing Rest Less and Jewelee II.

Several boats tacked early, but my plan was to sail as far across the bay as possible, hope for a shift to the east from thermal action, and try to ride some long tacks down the bay outside of the main powerboat thoroughfare, avoiding their wakes. The racers slowly became dispersed and it was difficult to tell where we were in relation to the other boats. Elenora was about the only boat that we could reliably identify, given the unusual rig on a Freedom 35, and she was soon way, way ahead of us, but we’d occasionally recognize a boat behind us too. 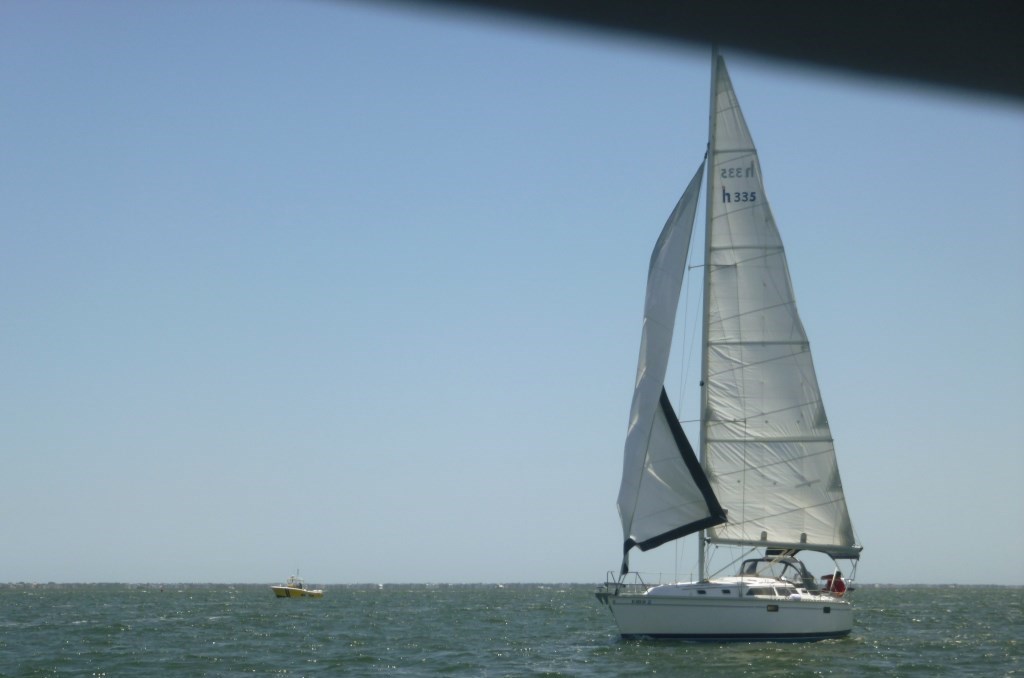 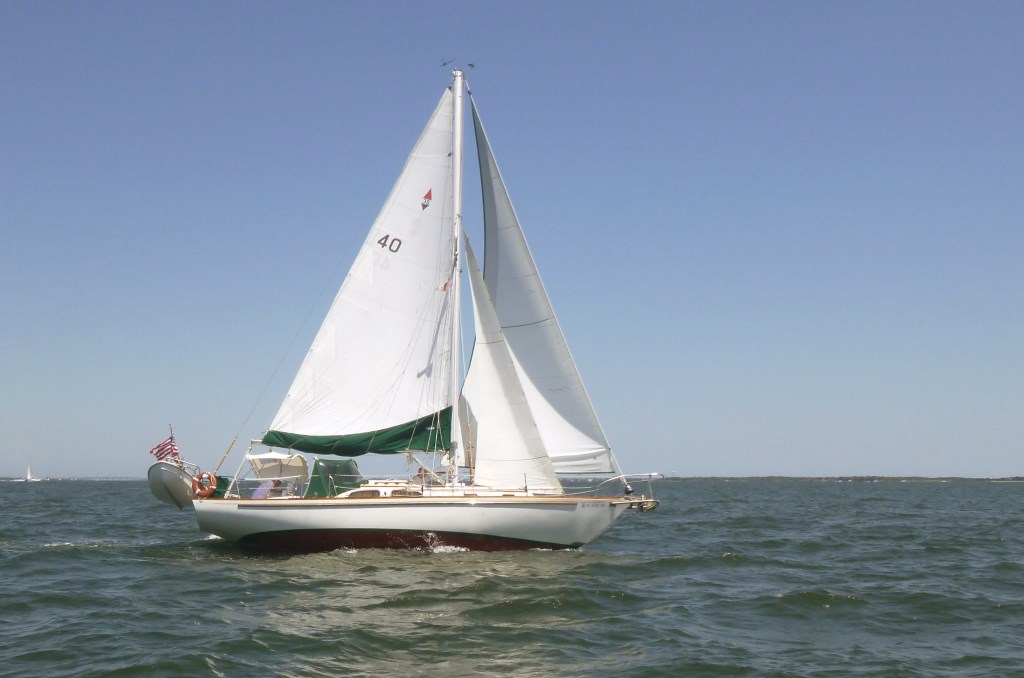 We consciously adapted to the less-competitive nature of the race, tacked leisurely, and possibly drank several adult beverages en route. As we neared BI, Elenora and Jewelee passed us coming the other way, which meant that we were third to the mark. Although Stormy Petrel popped a chute a mile or so behind us on the downwind leg, we maintained our position and crossed the line third. I’m not sure if we corrected up, but the six boats behind us all owed us time, so we were somewhere in the top three. It was an unusual race but a good day on the water, and we sailed fast.

Shortly after we returned to the dock, Sailor Steve went home and Jen showed up at the marina. Jen and I loaded in overnight supplies with the intention of sailing to Myers Hole, and were quickly off again. The wind had picked up, now gusting to 20 and kicking up the usual chop, and the thought of beating all the way down the bay again seemed laborious to me. I was hoping to hit the Oyster Creek Channel at some time other than peak flood, but all signs indicated that we were going to hit it precisely with the max current against us at 1830. Additionally, I had forgotten to pick up racing hoagies and hadn’t eaten all day, and the combination of these things started to make me cranky. We fired up the engine and Jen motorsailed us to BI while I rested.

We first noticed the alien spacecraft as we rounded the small dune where the kiteboarders play. 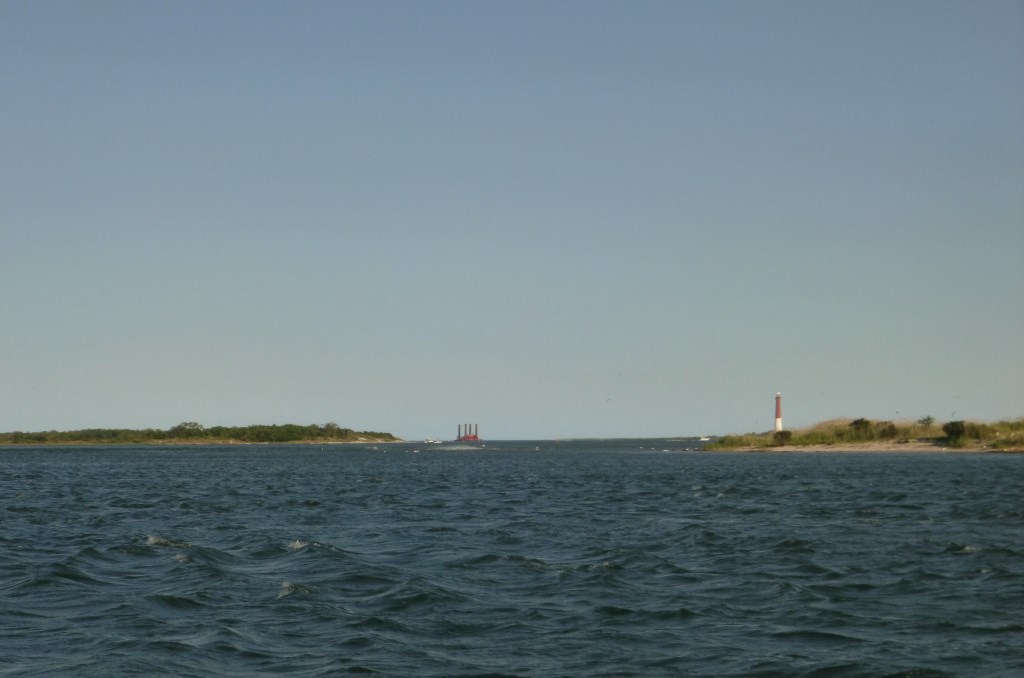 From a distance, it appeared to be a red dome with four sticks jutting out of the top (possibly some sort of hyperdrive system for intergalactic space travel). I couldn’t tell exactly where it was or whether it was moving, but it certainly piqued my interest. As we slogged against the 2kt current, it slowly got larger, and when we finally entered the basin behind the lighthouse, we could see that it was actually more of a cube, like a floating factory. 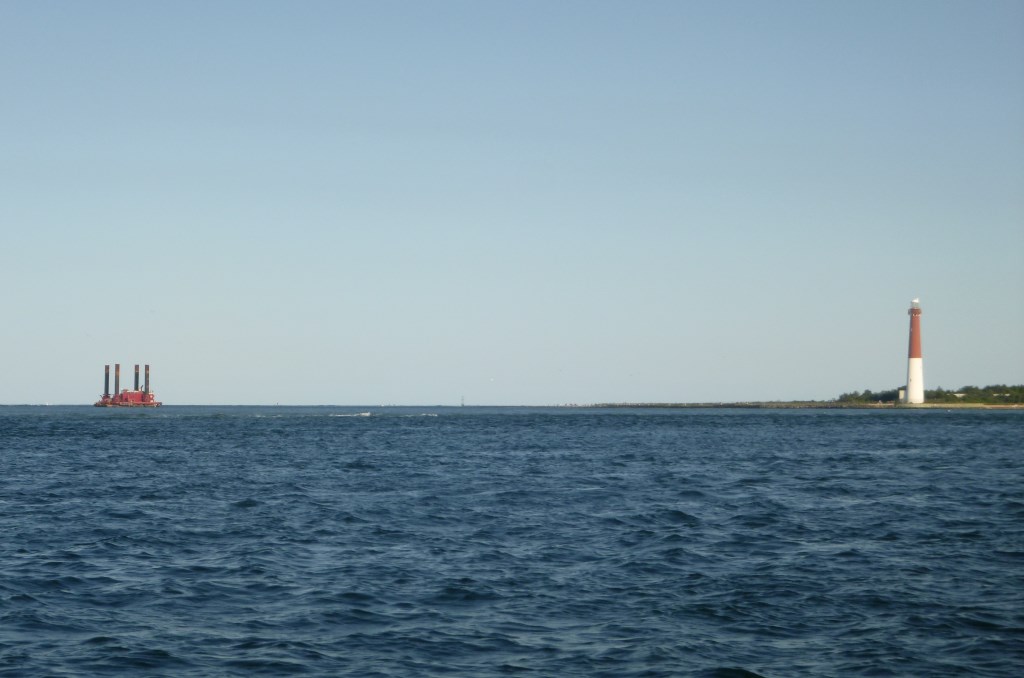 I must have been reaching Roger Waters levels of dysphoria, because at one point, I could have sworn I saw a Pig on the Wing. 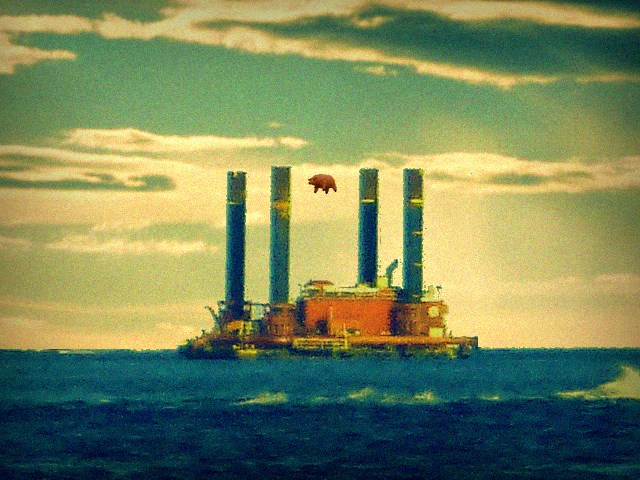 The anchorage was surprisingly empty. We tucked in a couple hundred feet behind the only other anchored boat—an extremely salty-looking Gozzard 36A (I think)—and set our anchor without difficulty. I deployed the kellet and puttered around with nautical concerns while Jen made a much-welcomed dinner. 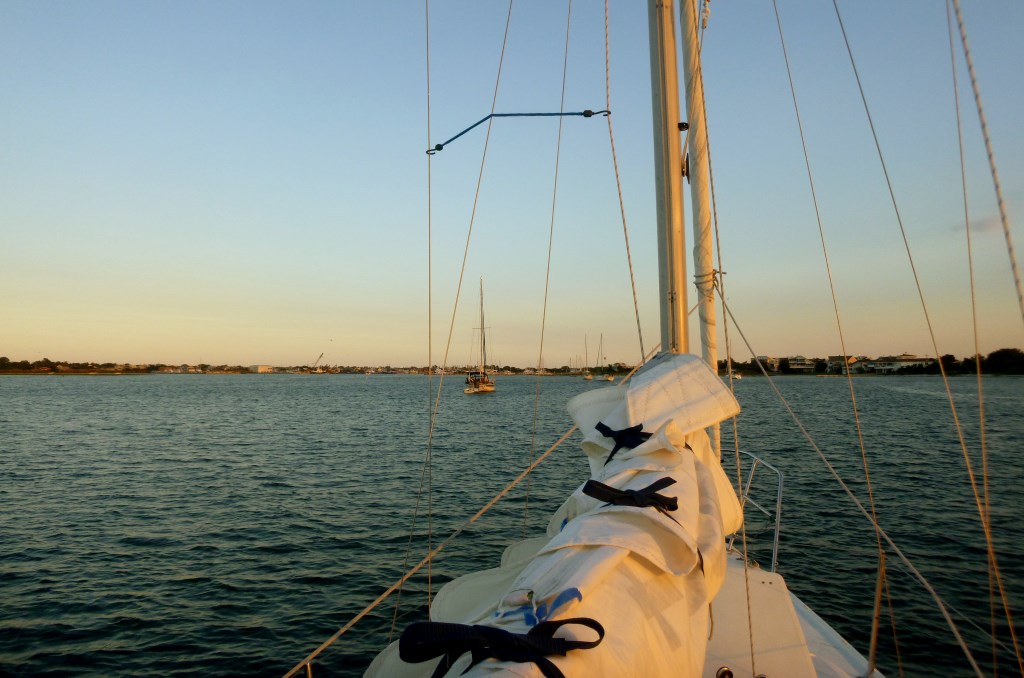 Sometimes I feel like all of our decent photos are from Myers Hole, but it just never fails to be spectacular. June’s full moon was known to the Algonquins as the “Strawberry Moon,” at least according to the Farmer’s Almanac. It’s somewhat rare for the full moon and solstice to be on the same day, which they are this year. We were saw it a few days before the solstice so it wasn’t quite full, but it was nearly there. 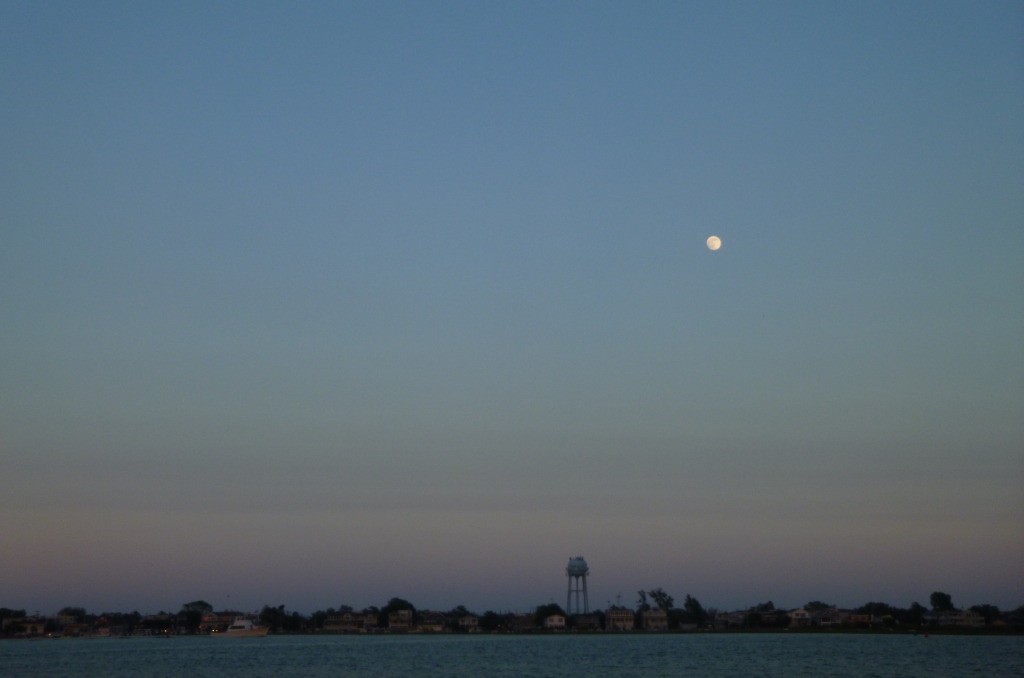 Jen got up early and took some great photos of the dawn skies to the east. 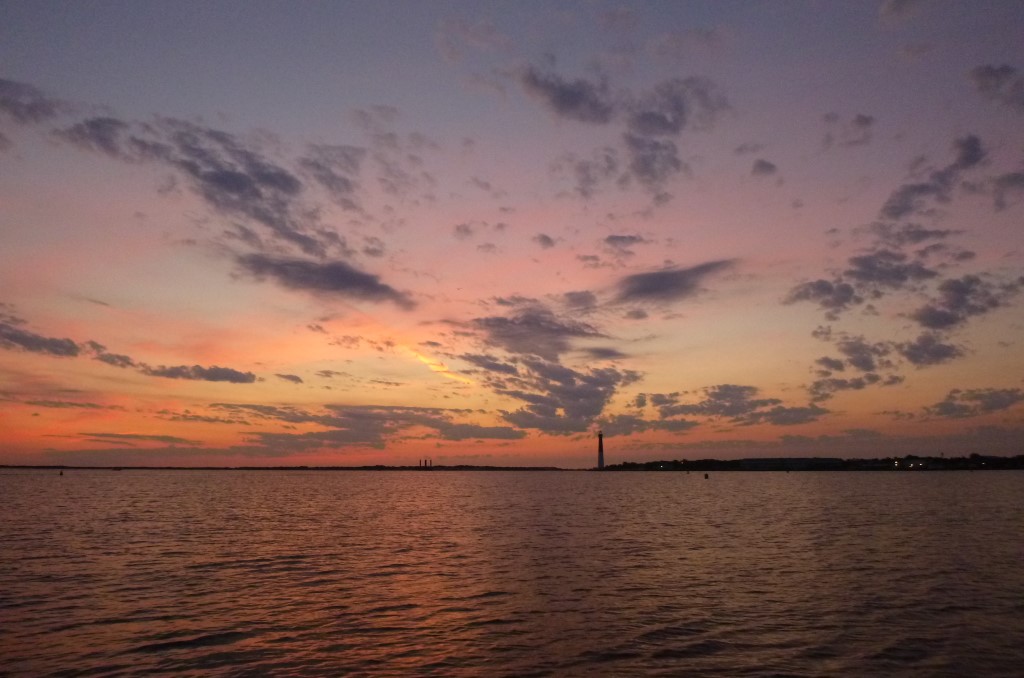 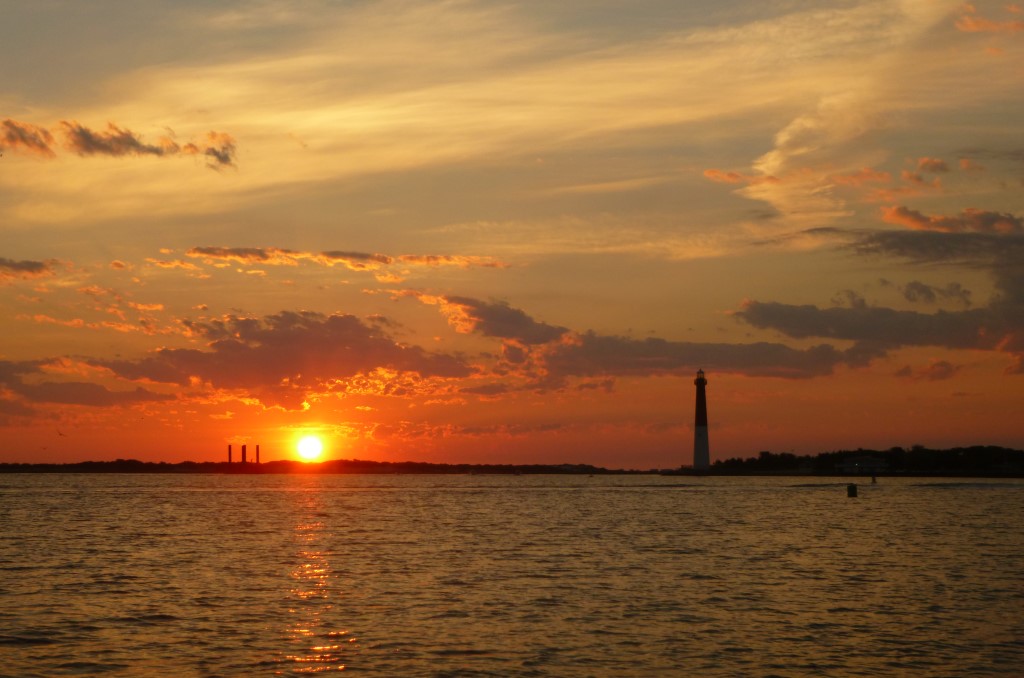 Slack before ebb was at 1030, which gave us plenty of time to wake up and prep the boat. The commercial fisherman at Viking Village sound their horns as they’re leaving their berths, and you get fairly used to the noise, but while we were getting ready to go I heard an unusual series of horn blasts and went up to take a look. It turned out to be a large tugboat, followed by a tiny tugboat, chugging past the Coast Guard station toward the inlet like a mother duck and her duckling. Tugboats are rare on Barnegat Bay—there’s no major shipping, and I’d only ever seen another one once, pushing a barge. I watched them for a few minutes, and, sure enough, they went directly to the alien spacecraft/Animals factory and towed it out to sea.

We were really due for some quality relaxing on the boat, and this weekend delivered. I’m glad that we weren’t dissuaded by the current in the Oyster Creek Channel—it was a little slow, but it wasn’t that bad and anchoring at Myers was definitely worth it. I have no idea what that machine/vehicle was, but I appreciate that sailing keeps us guessing. Thanks to Sailor Steve for racing, especially given the unusual format. Hopefully, some of the other boats that participated will be inspired to enter some our club’s more traditional races.

More photos are in the gallery here.