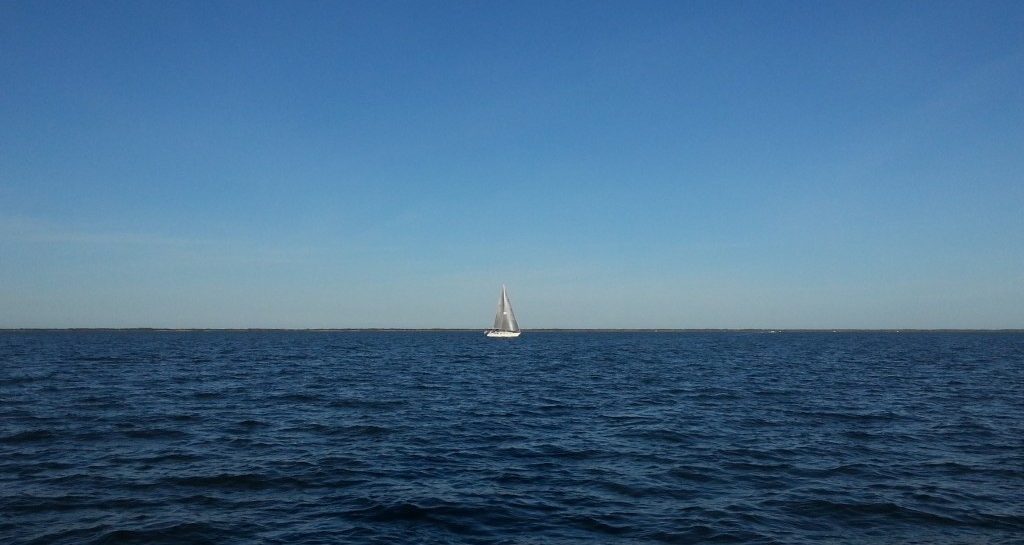 It may be difficult for the resolution to live up to the last few weeks of lead up, but Fortuitous sails again. 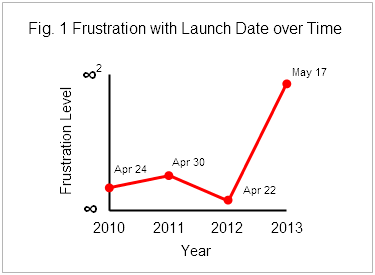 The forecast for the weekend wasn’t stellar so we took off from work on Friday to improve our chances of success. We still had some things to do before sailing, including another round of attempting to install the sensor for the depth finder and washing the boat, which had acquired a depressing amount of grime. We got to the shore around noon, launched, and tied up to the end of the dock to take care of business.

Some Catalina 22 skippers online have successfully mounted their depth sensors with the type of wax that’s ordinarily used for a toilet’s wax seal, and this seemed like it was worth a shot for under $2. The guy at the home improvement store started to launch into the instructions for how to install a toilet and was pretty confused when I said, “Oh, thanks, but this is for a depth sounder.” (Although he was less confused than the kitchen remodel guy in the same trip when I said “Oh, it’s not for a countertop—this Formica is for a guitar.”) In my case, the wax was completely ineffective, and balling up toilet wax is a disgusting mess.

I also had forgotten that I took down all of the teak trim that obscured the stupid ridge running around the edge of the interior. When I had tried to put it back the first time, it appeared that it wasn’t going to fit around the new cap nuts that I’d installed on the stanchion bolts and I reacted by flailing my arms and making an open-mouthed sad face like a baby who was unhappy with the flavor of the strained peas he was wearing. However on this trip, with a clear head, I realized that it easily went back together and got it reinstalled in no time. It felt good to actually complete something, and luckily that trend would continue.

We (mostly Jen) also cleaned like crazy. The interior of the boat was covered with sawdust, in addition to normal dust and some other grossness, so it was good to get all of that taken care of before putting the cushions back. The exterior wasn’t in much better shape, but over the course of 4 or 5 hours of cleaning, we got her looking great.

That much cleaning didn’t leave much time for sailing, but we were determined. The final hurdle was to test the roller furler. When we tried to remove the jib in preparation for Sandy, the furler drum unscrewed from the stem fitting with the sail partially deployed and it kind of got away from us for a few minutes. In the process, the foil that holds the sail’s luff and rotates around the forestay got bent. If the sail’s luff tape couldn’t get past the irregularity in the track, we wouldn’t be able to hoist a jib. I tried to hoist it normally and that didn’t work. I tried an aggressive hoist and that didn’t work either. I tried it with lots of backstay tension and with no backstay tension. I was getting nervous, but then I asked Jen to violently shake the foil while I applied steady pressure with the halyard and that did the trick. It’s not ideal, but we don’t change it that often (we don’t have another headsail that works with a furler), so hopefully this will get us through the season.

The rest? The rest was just sailing. 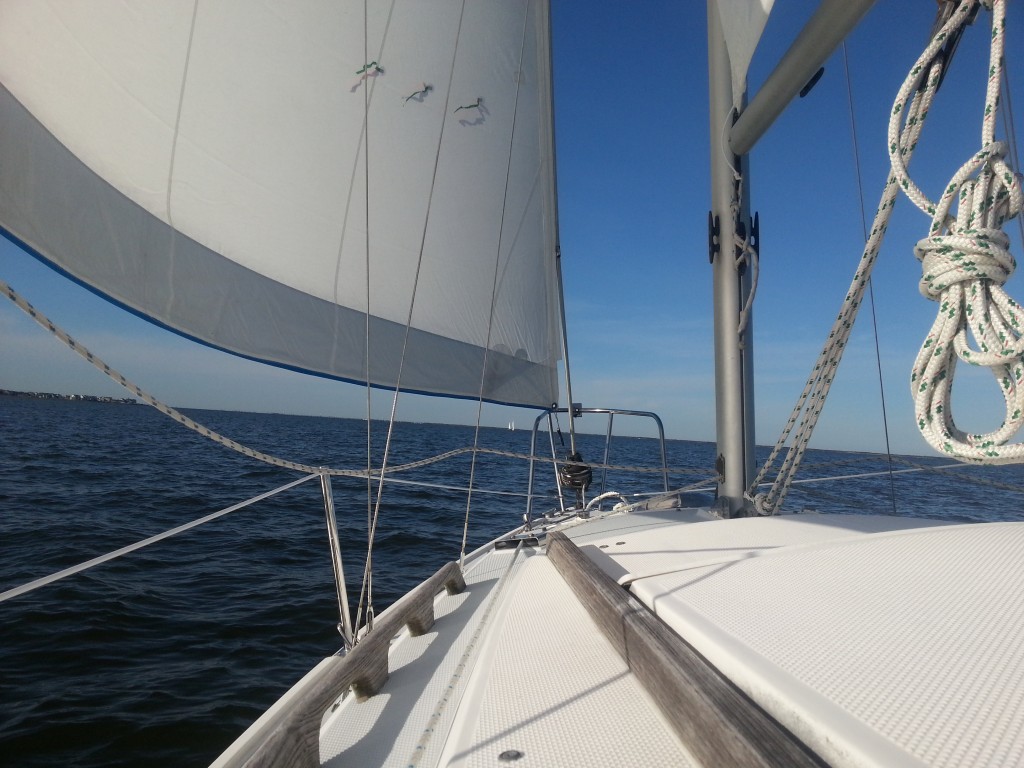 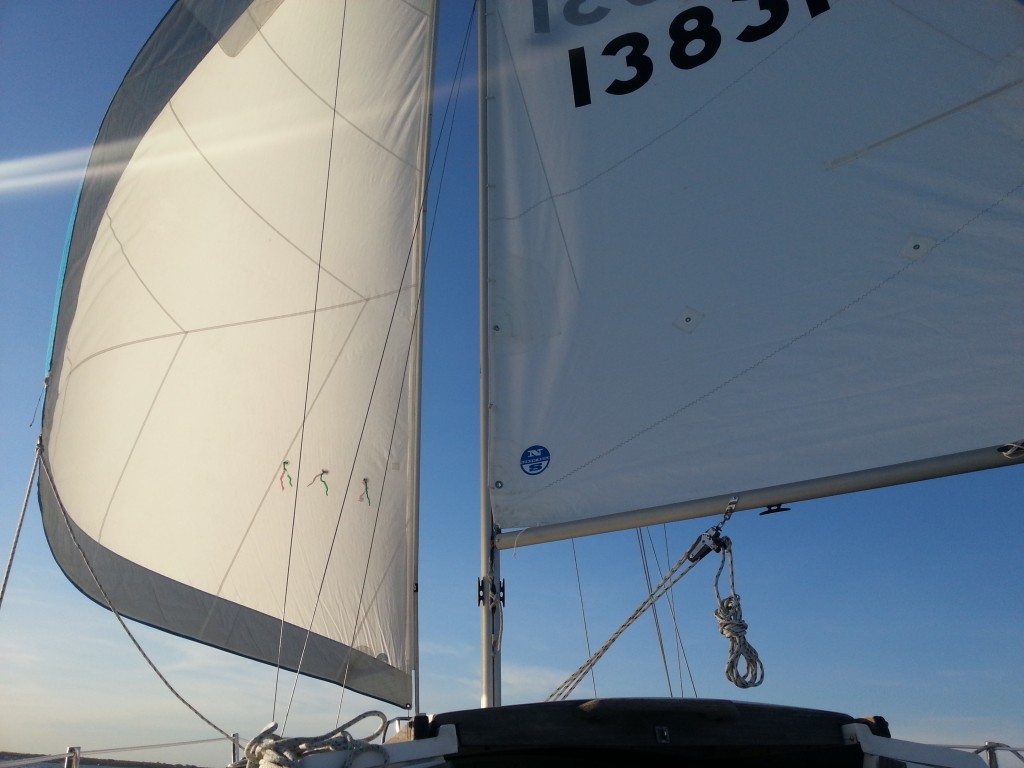 We didn’t go very far or very fast (the wind was under 10kts) but it was fantastic to get out there again. With no depth finder, we didn’t stray very far from the channel. The bay was pretty much empty, although we did see Val breeze by at a distance of a few hundred yards. We made it up to BB and spent time on just about every point of sail, including gliding back in toward Berkeley wing and wing. 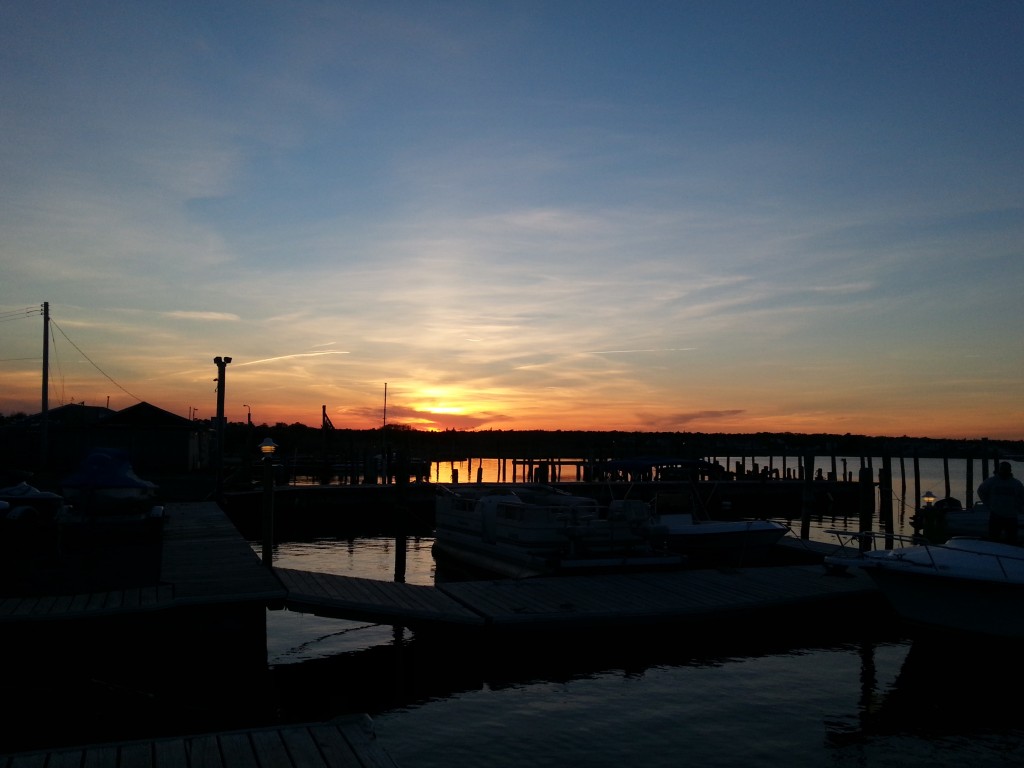 It may seem that we were just trying to pack in more sailing because we’re junkies, but we needed to make two trips regardless to get all of our stuff down to the shore. In my head we have a small boat—it doesn’t feel that much bigger than my truck to me in the abstract. This may be exacerbated by the fact that most of the other sailors that I talk to regularly have boats of 30ft or better. The difference between the size of my truck and boat is always clear, however, when we try to transport our boat’s cushions, which seem to consume none of the interior volume of the boat and all of the volume of my truck. This makes sense when I consider that my truck is only 16ft LOA with a 6ft beam.

Anyway, we had to get all of the cushions, random spare ropes, our stove, our flag collection, and other sundries out of the basement, so we were (per usual) late getting down to the shore. In addition, although the forecast called for only a 10% chance of rain the night before, it looked like we were beating the odds pretty handily. We checked the radar from our telephones and I thought I saw a break in the rain so instead of loading the boat in the drizzle we took a drive over to Island Beach to wait out the weather.

It was 1530 before we actually got out, and although it wasn’t technically raining, the air was heavy with that feeling of imminence. It started as soon as we got the sails up. Jen and I both kind of love sailing in the rain, we just hate putting the sails away wet, so then it became our mission to sail until we got a good half hour of no rain so that we could dry the sails and stow them dry.

This photo exaggerates the conditions a bit: 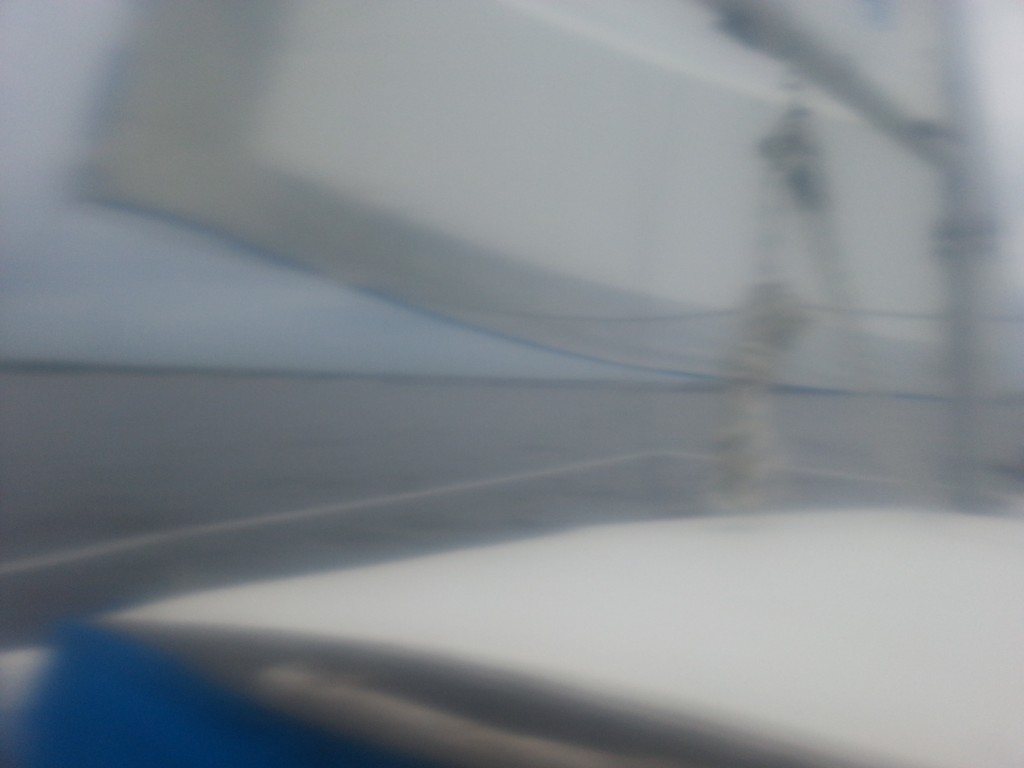 It would probably make for a more interesting story if I were to say that we were out in a Beaufort Force 9 gale making 8kts under a trysail in blinding horizontal rain and 30ft seas. As it turns out, this is just what it looks like when you try to take a picture with a telephone in a ziplock bag. The wind was more like 0-5kts and fluky.

We sailed north to 38, and then came back toward Berkeley to see what Captain Mike was up to on Retro. We never did catch him, as 5kts of wind off the quarter is a terrible point of sail for us, but we had fun bobbing around out there in the rain. 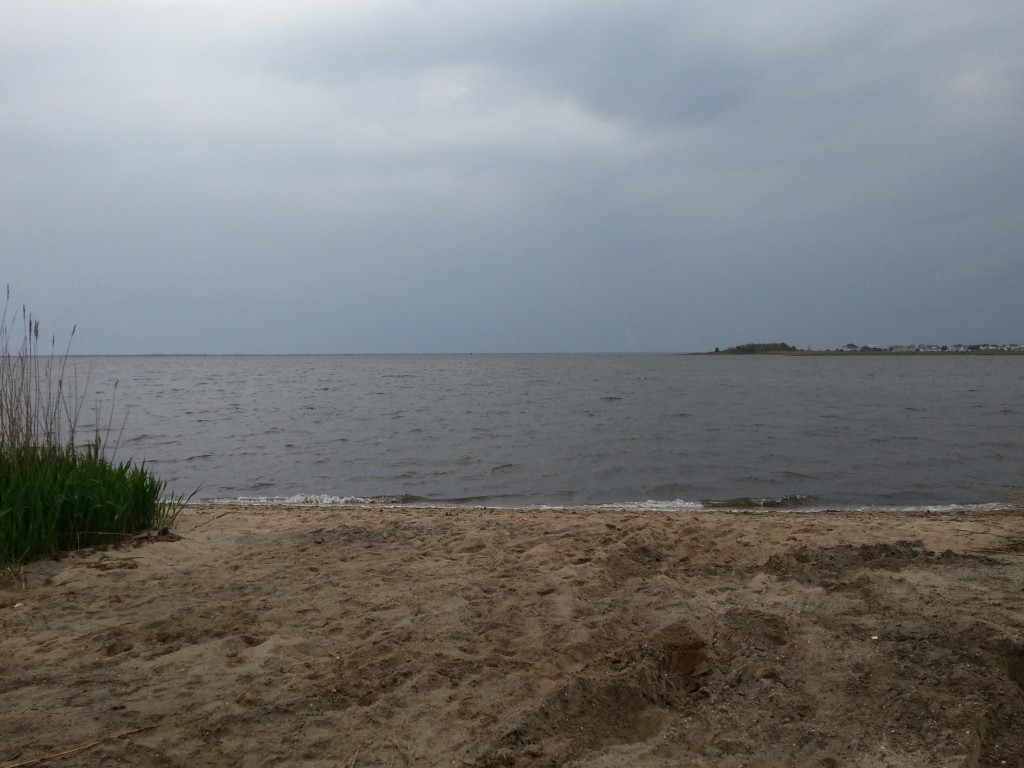 There was nothing monumental about these sails. They were short and aimless in less than ideal conditions, but getting off the schneid rebalances everything. We also totally remember how to sail. I don’t know why we would have forgotten, especially since sailing takes up the majority of my quiescent brain power, but there’s always a little twinge. Fortuitous is back.

Editor’s note: special thanks to bljones and @jwalgran for buzz marketing the boat log this past week. That was a great surprise and the response has been overwhelming. Welcome new readers, and feel free to drop us a line.