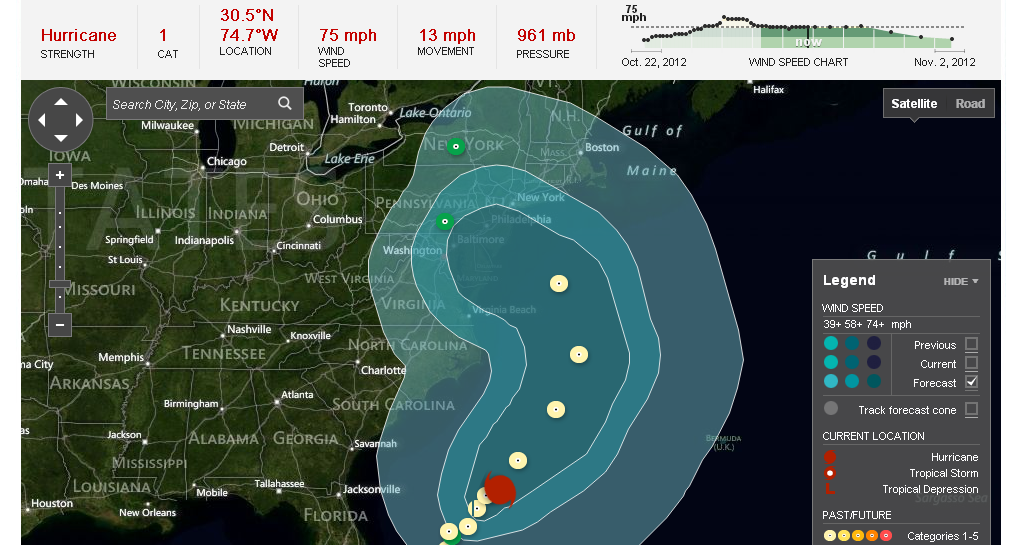 Ugh. Hurricane Sandy is currently heading this way, and let’s hope that the spirited language that’s being used to describe it turns out to be hyperbole in retrospect. I wasn’t even going to write the word “Frankenstorm” in this log entry because it reeks so heavily of weatherman rating bait, but if this storm were any more unusual it would have gone straight to a Boo Berricane.

While at the moment it’s not that strong as hurricanes go, the problem is that it’s going to slam into a polar air mass coming down from Canada. This “midlatitude trough” is the sort of weather system that can blow up into a destructive nor’easter even without the help of a rogue hurricane, and mixing the two is bad news. Add in a full moon for even more tidal range, and it’s not surprising that people are comparing this to the Halloween Nor’easter of 1991, also known as The Perfect Storm.

It’s not due to hit until Monday, and its precise target is not yet known, but it’s huge and we had to get Fortuitous to high ground. We went down to Trixie’s with a plan of taking down the mast, rigging the boat for road travel, and putting her at Val’s house, where she waited out Hurricane Irene.

Things went smoothly for the most part, but as always, the problems are more interesting to write about. This was only the second time that Jen and I tried to take the mast down by ourselves, but it was simple enough last time that we didn’t think it would be too big a deal. The first step was to get the sails off, and when I tried to roll out the jib, the bottom of the furler came off the boat. Meaning the whole forestay came off the boat, with half a sail in 15kt gusts. Jen couldn’t control it and since it was still partially furled, we couldn’t get the sail down. Someone came over to help when we started freaking out and he wrangled the sheet while I went up to the bow and manually turned the whole mess so that we could get the sail off. In the process, the foil got bent—it remains unclear as to whether or not it’s broken or if it can be snapped back together, since the kink is near the intersection of two sections of foil. The drum apparently screws on to the hardware that connects to the stem fitting, and I guess we’ve somehow been unscrewing it over time, so I don’t think that anything is actually broken with the forestay or furler itself, but it was extremely unnerving to see it part. We carefully splinted all of the parts to the mast with a boat hook for support once we got the mast lowered, and we’ll have to deal with whatever damage it sustained another day.

The other problem was that when we put the boat on the trailer last time, we didn’t get it exactly lined up correctly. She was listing a few degrees to starboard, which [we believe] is fine when you’re only leaving it for a few days, but [we believe] is not suitable for towing, where the boat will be subjected to weird bouncing and other unnatural forces. Additionally, it meant that the keel wasn’t centered on the roller. We never tow the boat with the keel winch supporting the weight of the keel, so we’d need to get the boat aligned to be able to lower the keel and let the trailer bear the load. This would mean partially launching the boat to float the stern over, and trying to launch a boat when there’s a hurricane lurking off shore is about as against the grain as you can get.

A boat ramp with foul weather in the forecast is like a bar on St. Patrick’s Day: it’s packed beyond capacity with amateurs who partake too infrequently to have any idea of what they’re doing. Since our boat’s parking spot is directly next to the ramp, I had to get in line with the truck just to get a chance of getting near it. As soon as the boat ahead of me was pulled, another boat pulled up and then their driver went around me. Of course, they’re only quick when they’re cutting you off. Once he’d staked his claim, the driver got out of his truck and lit up what looked like a prop cigar with a ring size somewhere around 128. He and his compatriot on the boat then proceeded to do some downtempo slapstick over the course of the next 25 minutes while they tried to figure out how to connect a winch to a bow eye. Eventually they got the boat hooked up, but instead of simply winching it the rest of the way, they pulled it mostly out of the water with the truck, meaning that they’d have to winch the entire weight of the boat instead of using the boat’s buoyancy to their advantage. Monsieur Stogie didn’t have quite the oomph for this task, but fortunately Martin was there to emasculate him and wheel it in far enough that they could clear the ramp.

We quickly got squared away, put on the stern strap, and attached the lights that I soldered together last night. I know that somewhere MaineSail is mumbling profanities over the revelation that I didn’t use marine-grade crimps with heat shrink, but these lights aren’t staying on the trailer, and I’m way better at soldering than crimping. What’s even worse to me is that I used high-grade speaker wire for the grounds—this is not a cost effective solution, but I had it on hand, it got the job done, and at least we no longer have to rely on using the trailer itself as part of the circuit.

I hate towing, but it was pleasantly uneventful, and we got the boat parked safely in Val’s yard.

Good luck to everyone in the path of this thing. 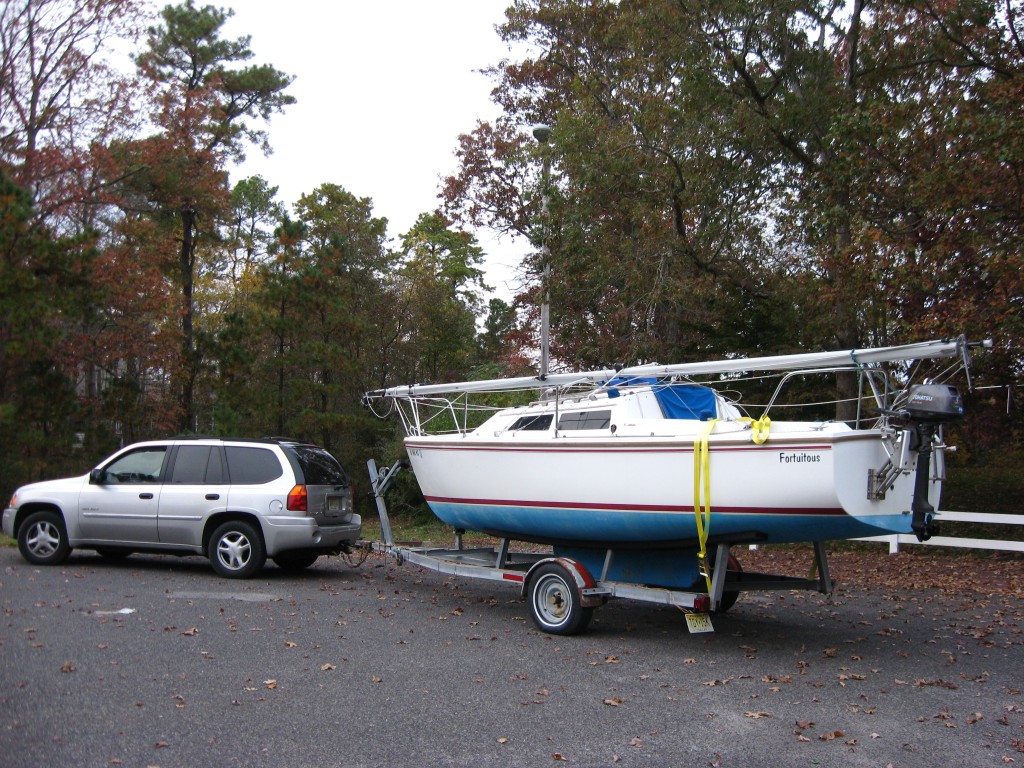 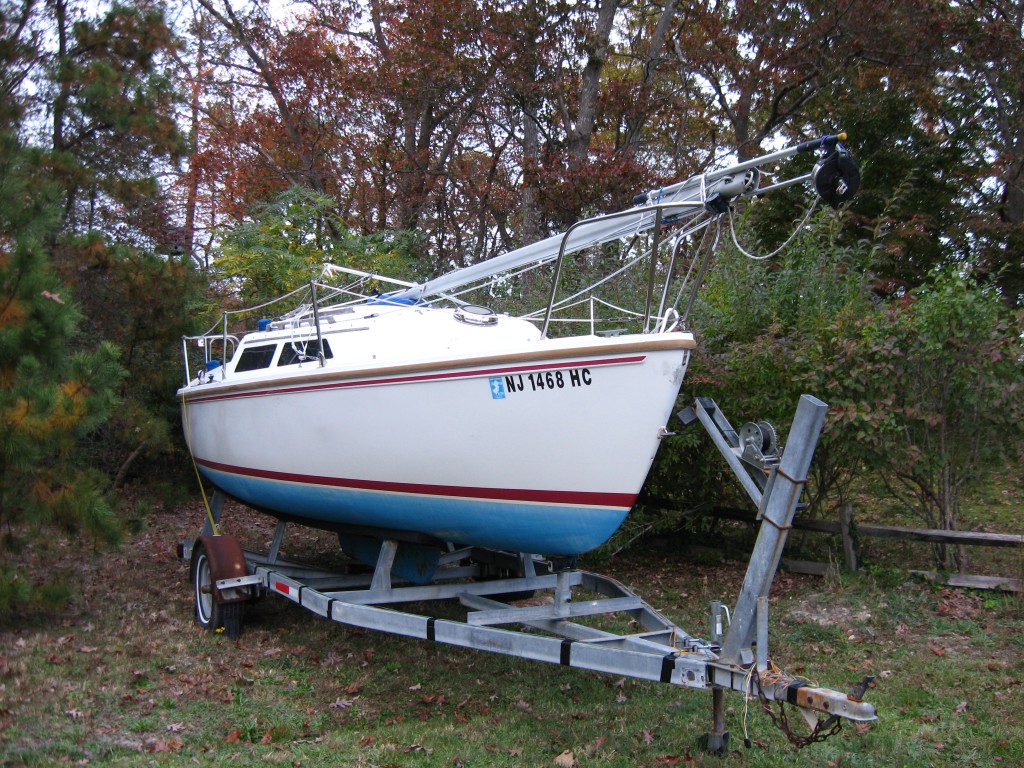