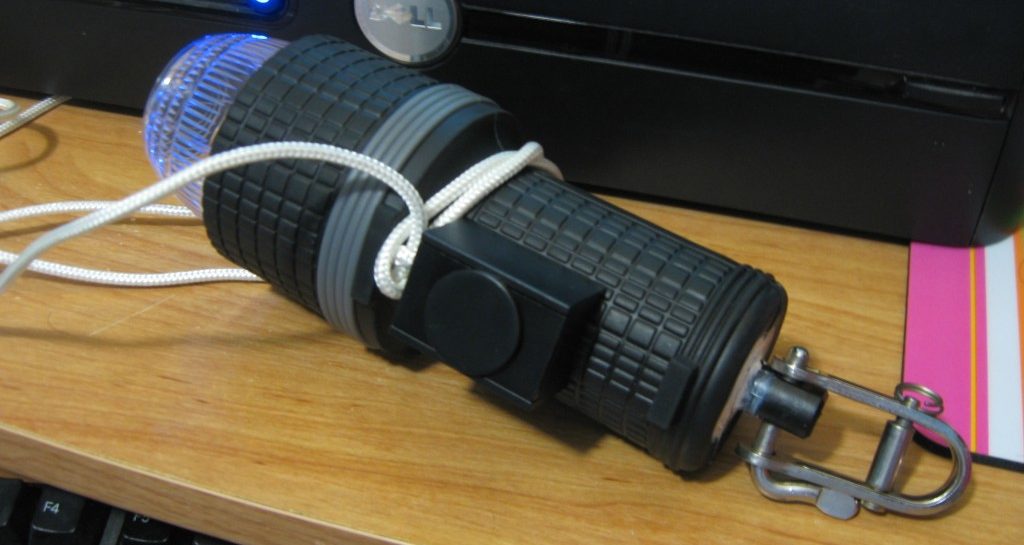 The leaves are changing, it’s getting chilly out there, and we’re rapidly running out of sailing days. All we can do is try to maximize our remaining weekends.

Saturday was the Frostbite Race, the traditional final race of the year for the Windjammers, and I crewed on Providence II. Temperatures were well into the 60s, and the irony of the name reverberated like the worst sort of marginal office humor. The wind was light and predicted to be from the west, so the racing chair sketched out a windward/leeward race with 40 as the windward mark. When we got out there the wind was nearly nonexistent, and when it eventually filled in it was more to the south, so the start was delayed and the course was adjusted. Things were generally squirrely though and the wind continued to clock as the start approached. By the time the race was underway, we could reach to the windward mark (which was now the mark opposite of 40), making the race somewhat less technical. When crews aren’t forced to sail into the wind and test their ability to tack and point it turns into something of a drag race—the advantage simply goes to the fastest boat (or the best handicap).

Although we were shorthanded (for Providence) I was still able to spend a lot of time trimming the main, which is probably my favorite job. Between the halyard, vang, traveler, and mainsheet, there are more things to tweak, and it can be a beautiful thing when it’s all working, like when you come around a mark and you leave the traveler down, bringing it up slowly as the boat accelerates and the apparent wind moves forward, keeping the sail filled without being choked at any point. This probably doesn’t translate well to the written word, but when you do it right, it just looks so right.

We sailed well, finished first by a large margin in actual time, and very narrowly finished first in corrected time too. We were spotting the Ensign Chianti 117 seconds per mile, and they wound up only 5 seconds behind us with their correction. It was a nice way to close out the racing season.

Following the race was a covered dish dinner at the club, and Jen came down separately for that. Before dinner, however, we launched Fortuitous and tucked her into a slip at Trixie’s. We wanted to get in one more night on the hook, but didn’t want to launch in the dark after the party. The pot luck was running pretty lucky and Jen’s homemade macaroni and cheese (Note to Canadian readers: this is like the non-instant version of Kraft Dinner) was an especially big hit.

After dinner, we drove to Trixie’s, put a few remaining things on the boat, and motored out of the marina under cover of darkness. The plan was to anchor at Berkeley Island, but it was such a nice night (despite dropping temperatures) we decided to put out the jib and turn off the steaming light for a bit. We hadn’t sailed at night since the time that we accidentally stayed too late at Martell’s with Tim and Andrea, which would make this our first intentional night sail.

Sailing at night is remarkably different. It really brings out the quietness in a way that you can’t appreciate when you can see. I was talking to Jen about it at the time, and I was going to write down my thoughts here, but I later realized that I was pulling most of the language from a Bill Schanen article that I had completely internalized. His column in Sailing Magazine is one of my favorites: he’s got the kind of crusty curmudgeonly voice that only a true romantic can get away with, and I would love to have a job like his someday. I encourage you to read his article “Colorful Experiences Found when Sailing in Black and White.”

There were no boats, there was little wind, but there were ten times the normal amount of stars for New Jersey, and the air was so clear that we could see not just the light of Old Barney, but clearly make out its base from some seven miles away. Temperatures were dropping and we eventually came about and headed back, which was closer to straight upwind than I had imagined based on where I thought we were. We didn’t want to have to make a whole bunch of tacks to get back there, but we really didn’t want to start the motor and ruin the vibe either, so we sailed as long as we could, eventually getting back to the pier at Berkeley. We fired up the outboard and putted into the cove where we sprawled our anchor rode across the empty cove like you might take up the entire bed when your spouse is out of town.

Jen prepped the boat for sleeping while I rigged our makeshift backup anchor light. During our cruise to Myers Hole we found that our relatively new, expensive LED anchor light wasn’t working, so I got a portable stern light, which is essentially a quasi-waterproof LED flashlight with an all-around white lens, and hacked it to be able to raise it aloft.

I removed the suction cup mount (which I can’t imagine working under any circumstance), and permanently installed a threaded insert where I could attach a shackle. I then scrimshawed some cord to the barrel with a Maltese Double-Intertwixt Hitch (or possibly two square knots) so that I could secure the light and keep it from banging against the mast all night and so that we’d have a way of getting the halyard back down. This was heavily influenced by Dale’s spare anchor light design, although my knot work is about 1/100th as impressive. 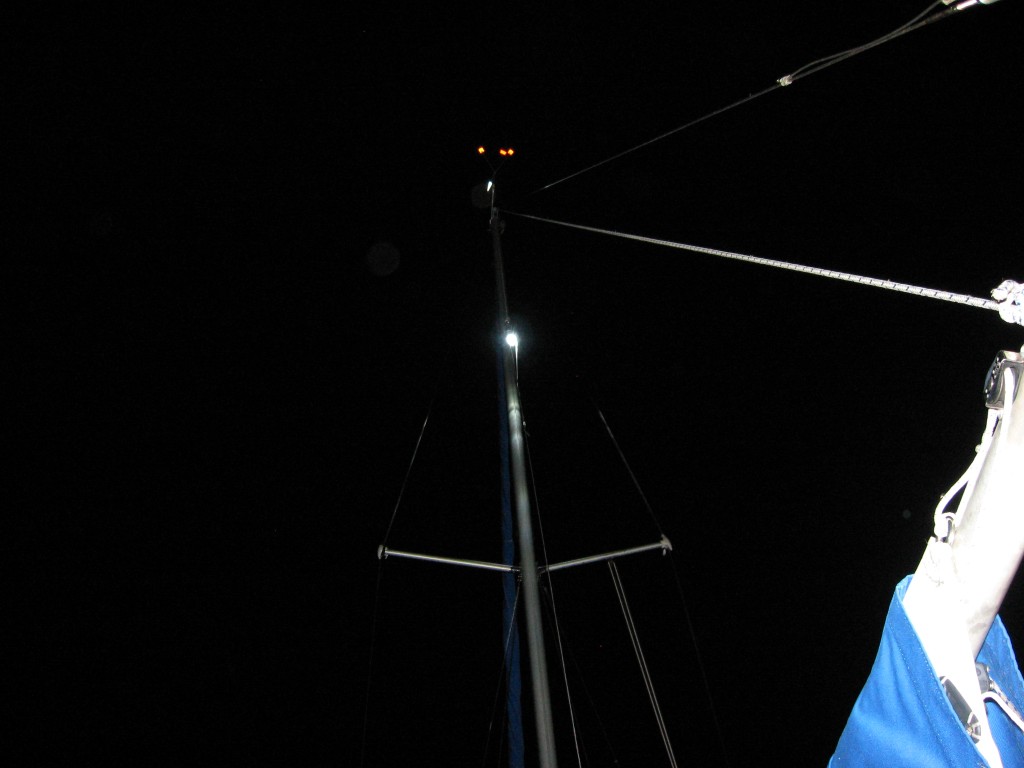 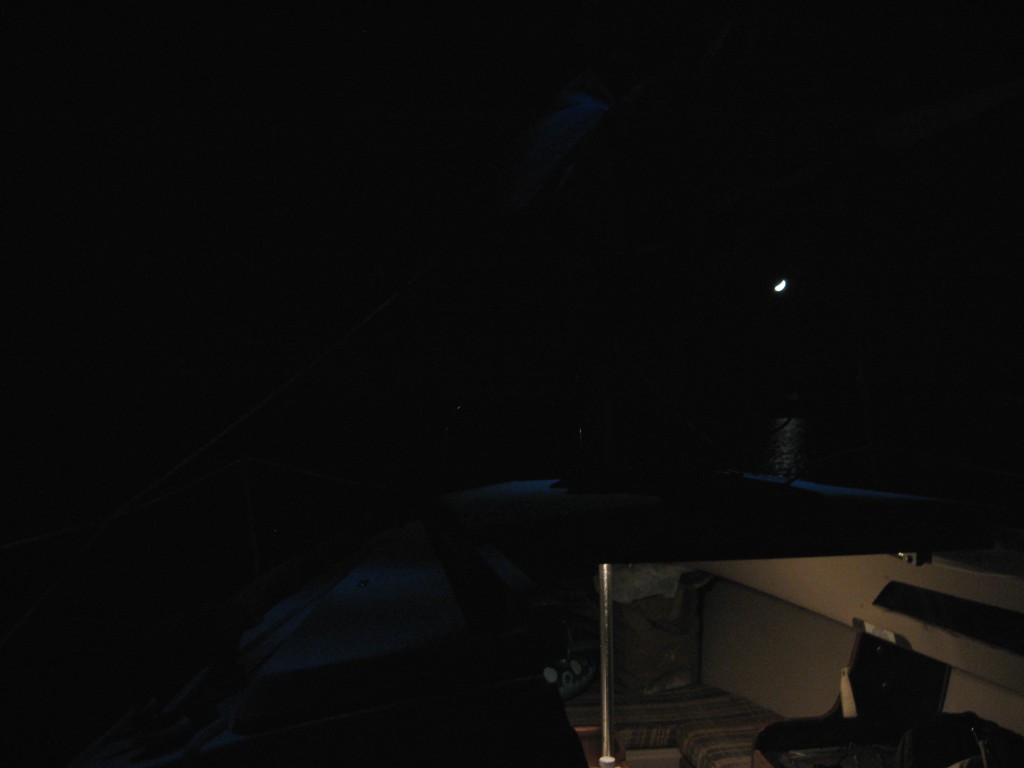 These pictures are terrible, but the light got the job done. It actually worked a little too well…it illuminated the boat to an annoying degree, and provided an eerie pre-dawn glow through the portlights.

That wouldn’t be the only thing that kept me up though. I almost never sleep at anchor—even under these near ideal conditions, it’s tough to shake the realization that it’s a pretty tenuous series of doodads that are keeping your bed there—but in this case it was mostly the fact that I overestimated our ability to influence the interior temperature of our boat with just our body heat. I had my usual sleeping kit: the world’s worst blanket, which is a seasick green collection of industrial fuzz that’s kind of the texture of fiberglass insulation, and The Bandito, a 3/4 size faux-Mexican blanket that is knit so loosely that it’s probably technically some sort of lowbrow lace. Surprisingly, this dynamic duo of textile technology proved insufficient for 43°F. To add to my problems, I was apparently also coming down with a cold.

In the crazy multi-car/multi-phase planning for this trip, we also forgot fuel for the stove, so even when it got to be what should have been waking up time, I couldn’t make coffee, which pretty much spelled the demise our Sunday of sailing. We huddled in the cabin until the temperatures came up, and I napped at anchor into the early afternoon.

While we didn’t get to pack in as much sailing as I would have liked, we did spend some hard-core time on the boat, for better or worse. Night sailing is truly amazing, my backup anchor light was largely a success, and although there might not have been any frostbite during the race, we eventually found our share.