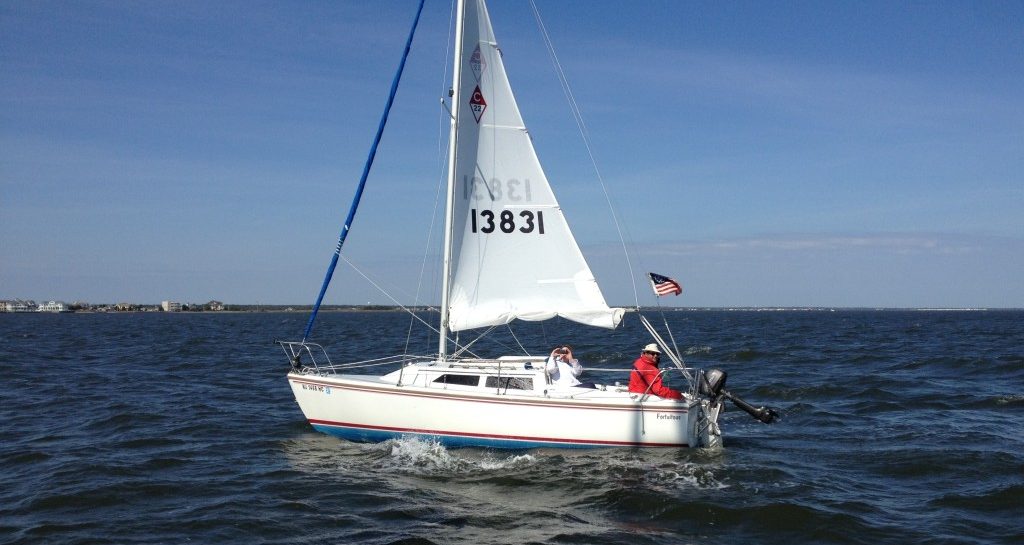 We almost didn’t go. All week, the forecast was atypically unwavering in its assertion that it would be rough on the bay. I tried to weigh safety, adventure, comfort, and a nagging sense that the season is drawing to a close. Around 9:00am, Jen and I made the decision that we would drive down to the shore and see how bad it really was. We threw some hiking gear into the truck in case it was overtly ridiculous, with a Plan B of wandering around Island Beach State Park.

It was surprisingly calm at Trixie’s however, or at least normal. The wind meter was reading 11-16kts and the cove wasn’t too churned up, although the northern side of the Berkeley Peninsula is sheltered when there’s a southwest wind. Missy was prepping his crab boat and we briefly boasted to each other that we were going to go out despite the forecasts, as I imagine two men are apt to do when they’re both about do something brave or stupid. A fisherman from Downe’s Fishing Camp who had just come in started yelling that it was getting choppy out there and Jen asked, “Do we need to listen to this?” thinking that he might have some additional information about the conditions.

I was tired of talking about the weather and was more interested in doing something about it, and simply said, “No.”

We launched and reefed down at the dock. 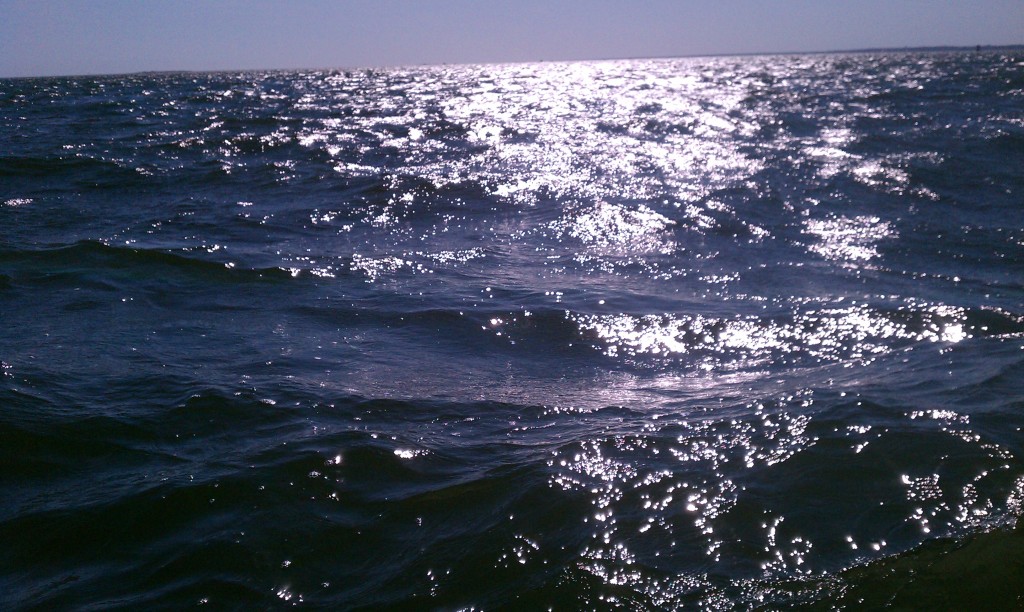 As soon as we got the sail up the boat sprang to life. When we moved beyond the shadow of Berkeley Island Park the keel cable went from the alto range right up to soprano, an aria to which the only libretto can be “You’re approaching six knoooooooooots,” and that was with no jib. The wind in the middle of the bay was vastly stronger than the wind at Trixie’s.

The focus of our attention wasn’t immediately the wind though, but the waves. We don’t usually get much in the way of waves (other than powerboat wakes), but the wind was basically aligned with the length of the bay and it had miles of fetch to work with. I don’t have the vocabulary to describe the sea state—I’m imagining words like chop, swell, rollers, combers, and it occurs to me that I don’t know what these really mean or if they’re even congruent to wave action on our shallow bay. It was an experience for us. We hadn’t seen anything like this since the Cattus Island Beat Down, although we’re much better sailors now and in this case it was more of a curiosity than a tribulation. The boat was behaving predictably and I didn’t feel like we were overpowered or out of control.

I was concerned that it would become too annoying to sail on the open bay with the waves though, and had the idea to sail up the Cedar Creek, which should have been more protected. We don’t point that well on just the main, so it was some work making our way far enough south to attempt a run at the mouth of the creek. As we approached the first set of markers, the whitecaps in the creek were indicating that it wasn’t much better in there, and being stuck in the channel without room to maneuver if something were to go awry seemed like bad news. We tacked and headed back toward open water.

Only one other Windjammer ventured out, and when the crew of Sunset saw us they quickly tacked to intercept. Their Pearson 33 was much better suited to the weather and naturally faster so they caught us without much effort, but I think we scored a lot of points because as they sailed past, Dale asked if I wanted to crew with him in the upcoming Frostbite Race. Here are pictures of us taking pictures of each other (in what looks like perfectly calm water…this was over by Sunrise Beach which was providing some shelter, and waves always look flatter in photos for some reason). 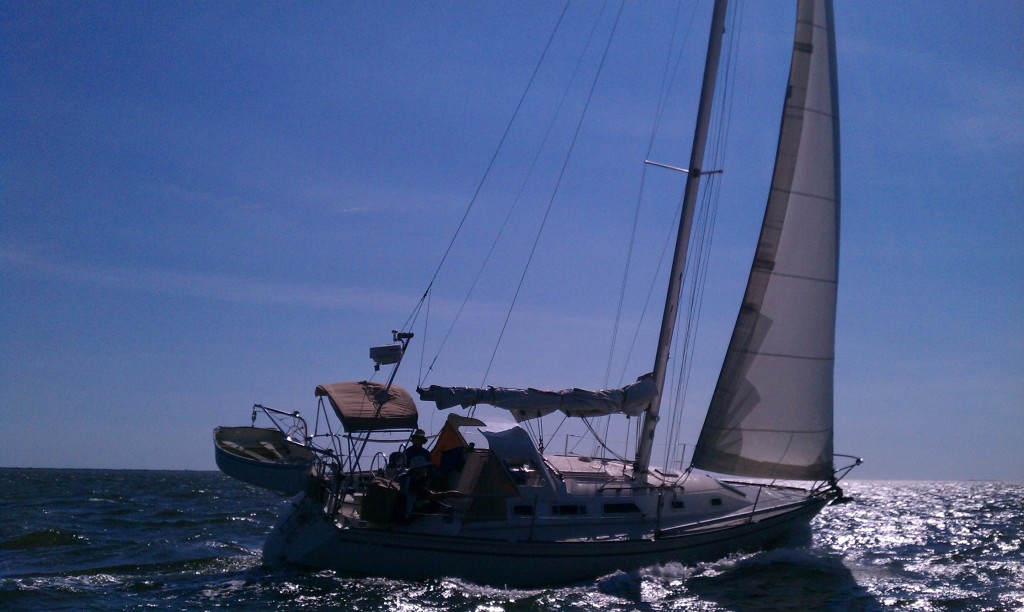 My initial fears that it would be too annoying to sail were unfounded. We acclimated to the conditions and it was actually pretty fun. There was a moment when I had to use the head and turned the tiller over to Jen, which did lead to a little bit of scream-crying, but in reality she did fine and when I re-emerged we were still on the correct heading. It took us a long time to reach BB, but we made it just in time to see a J/80 leaving Forked River with full sails up—those guys must have had a hell of a ride. Our camera was a little salty by that point, but we tried to get a picture, which happens to show the whitecaps better. 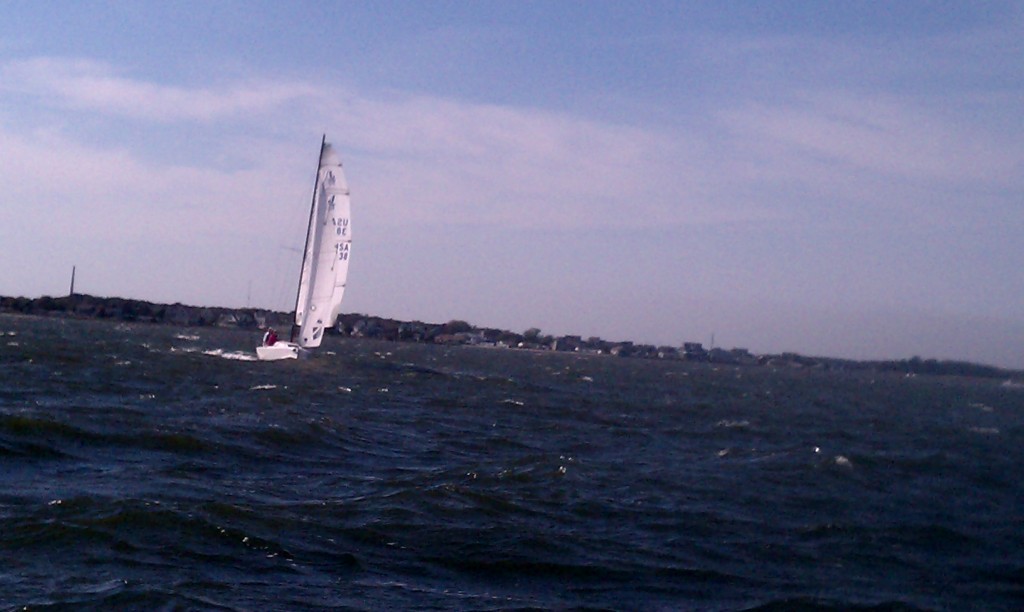 After rounding BB we headed back on a broad reach and made excellent time, although steering proved to be a little more challenging on that point of sail. We had to jibe to get back toward Trixie’s, and I was debating whether or not we should do a real jibe or a chicken jibe by tacking through 270 or so degrees. Things can seem deceptively calm when sailing with the wind, and I didn’t want to be surprised that it had kicked up to 30kts or something. My hand was forced when we came across a string of tightly packed crab pots that I could neither sail safely through nor veer away from without going dead down wind, which I didn’t want to do in that much weather. Jen ran the main sheet for the sake of speed (I usually do it myself on jibes) and we executed a textbook controlled jibe to avoid both the pots and running by the lee.

I realize that we weren’t exactly rounding Cape Horn, but this was an extremely exciting sail for us, and one that would have had our pants wet with more than just bay water not too long ago. You know you’re in some weather when the spray coming over your bow doesn’t follow a parabolic arc but instead reaches apogee and then dissipates into a horizontal aerosol, and the waves…the waves! Despite the conditions, we were able to settle into a groove and sail comfortably pretty much wherever we wanted, and I was relaxed enough that at times I was nonchalantly steering with my foot when fiddling with the VHF or something. With a reefed main, a tight halyard, and a fully tensioned backstay we weren’t pinned down and were still sailing fast, if off the wind a little more than usual. It definitely wasn’t Christopher Cross’s version of sailing, and any umbrellas in our drinks would have inverted and gone airborne, but it’s nice to mix it up with a little adrenaline every once in a while. I’m glad that we took the opportunity to sail in some vigorous weather, and I think that the confidence gained will serve us well in the future.