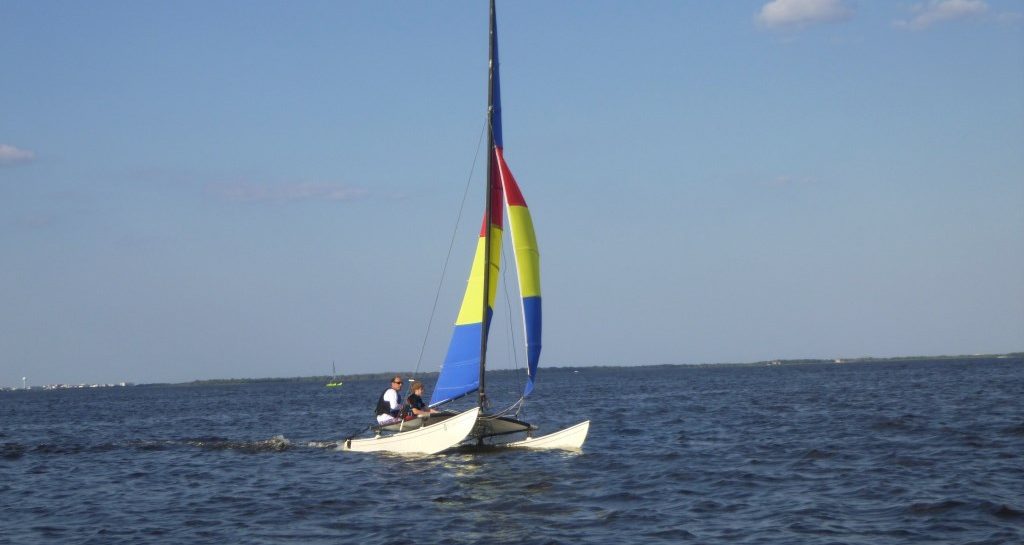 Ah! well a-day! what evil looks
Had I from old and young!
Instead of the cross, the Albatross
About my neck was hung.

From Samuel Taylor Coleridge’s The Rime of the Ancient Mariner, from Project Gutenberg

The water was high and the wind was predicted to be manageable, but as is so often the case, things were weird right out of the gate. Jen was still wrangling the boat as I walked back from parking the trailer across the street, and as I approached she volunteered, “I got distracted by something gross in the boat.” That grossness turned out to be a dead bird, right on the starboard cockpit seat. Without going into too much detail, it wasn’t a fresh kill either.

I have no insight into how or why this happened, but cleaning it up wasn’t how I envisioned starting our sail. It’s a good thing that we’re not particularly superstitious—this couldn’t have been a great omen. Of course, women on boats are supposedly bad luck too, and Jen and I seem to survive most of the time (although I suppose that we should be thankful for this tradition, since without it we wouldn’t have the Village People’s In the Navy.) I’m sure that it was completely unrelated that I immediately dropped our camera’s rail mount overboard. If we’d been dealing with truly bad juju, I probably would have dropped the camera itself, which remained safely in my sea bag. My green sea bag, since black sea bags are bad luck too.

As it turned out, there probably wouldn’t have been too much for our rail-mounted camera to capture because the sail wasn’t all that exciting. We decided that we’d try for Toms River and headed north under full sails. 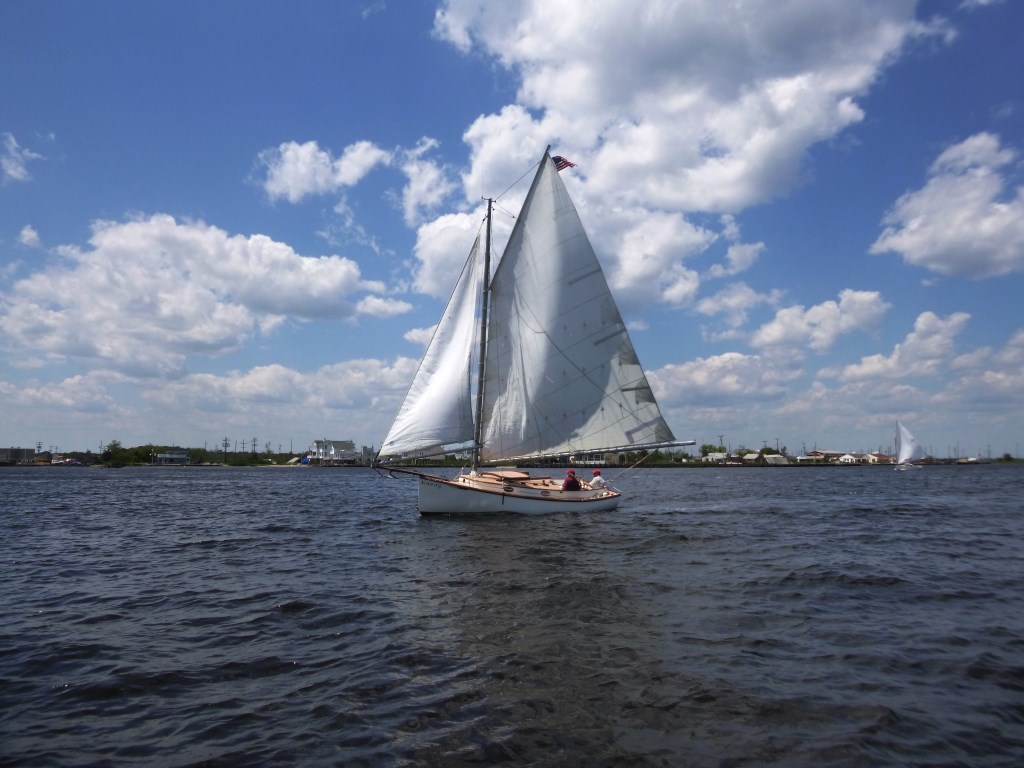 I guess a lot of fathers had boating on their Fathers’ Day weekend wishlists, because between that and the copious sunshine and low humidity, everyone was out. Traffic in the narrower parts of the channel was busy and the water was churned with wakes. Adding to the confused sea state was a fluky wind that varied greatly in intensity and direction. They guys at Trixie’s later hypothesized that the sea breeze was fighting with the prevailing northwesterly wind, which sounded like a reasonable assessment to me.

As we neared marker 36, there was a line of sailboats coming out of Toms River that seemed to stretch all the way to the horizon. It wasn’t until the first one rounded 36 and started going the other way that we realized it was a race. The channel is narrow there and I didn’t want to get up in their business, so instead of continuing on to the Toms we tacked around and headed back the way we came, taking advantage of a shifting wind that should have let us beam reach up the bay.

“Should” being the operative word. We were close hauled or close reaching much of the way, with occasional bouts of drifting. A Catalina 25 was right on our heels as we came around 39 and I refused to let him pass us. We started tweaking the little things to try to wring the most out of what wind we had and fended him off all the way down to 40, where he peeled off and headed toward Tices. In the process, we straight-up passed a Catalina 30. He must have taken a year off of his sails’ lifespan just in the time that we were watching him because there was never a moment when they weren’t flogging hopelessly, but we don’t get to pass many boats, so he goes on the Wall of Shame regardless. 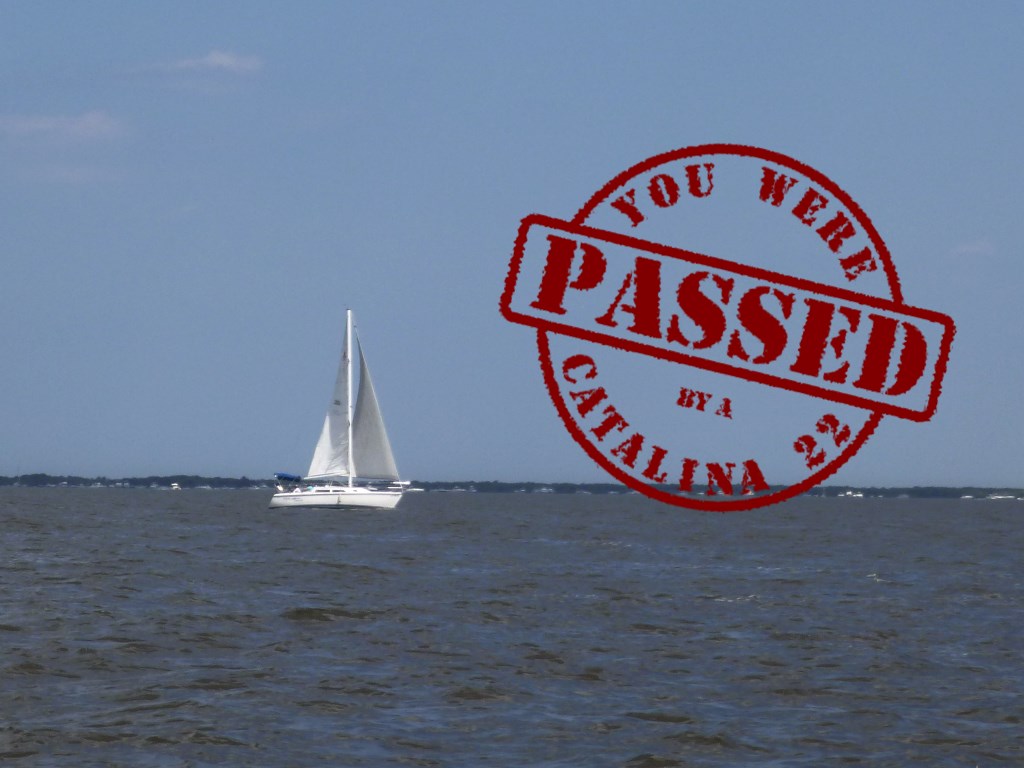 * Note the fender—the nautical equivalent of walking around with toilet paper stuck to your shoe.

We sailed on to BB with increasingly annoying wind. I intended to tack around the mark and head back, but there were boats swarming around like gnats and we couldn’t even complete the tack before we had to stand-on to avoid freaking out a sport fisherman. I assume purely to annoy me, he then came about and attempted another broadside on us, throwing up an even bigger wake as it commingled with the first. I’d had enough and we jibed to continue back toward Berkeley.

I thought for sure that the return leg would be a relaxing reach, but we were still close hauled for some reason. Additionally, I felt like the tiller was fighting me. I thought that maybe I’d trimmed something very wrong and was creating crazy weather helm, but no sail adjustment resolved it. It wasn’t until miles later that I realized that the rudder had kicked up a bit, which makes for a very inefficient foil.

We considered heading in, but there was still plenty of light and we decided to anchor for a little while and eat. Berkeley was pretty full so we motored over toward Glen Cove to see if we could anchor over there. As soon as we got set, I realized that we were close to the entrance of a lagoon, and there suddenly seemed to be a parade of boats trying to get in there, which defeated the whole purpose of trying to find somewhere secluded. Between that and a nagging mental picture of the debris trajectory from Sandy, we made the decision to weigh anchor and take our chances at Berkeley. We anchored next to a sailboat that turned out to be Tiki and watched as they played with their Hobie. 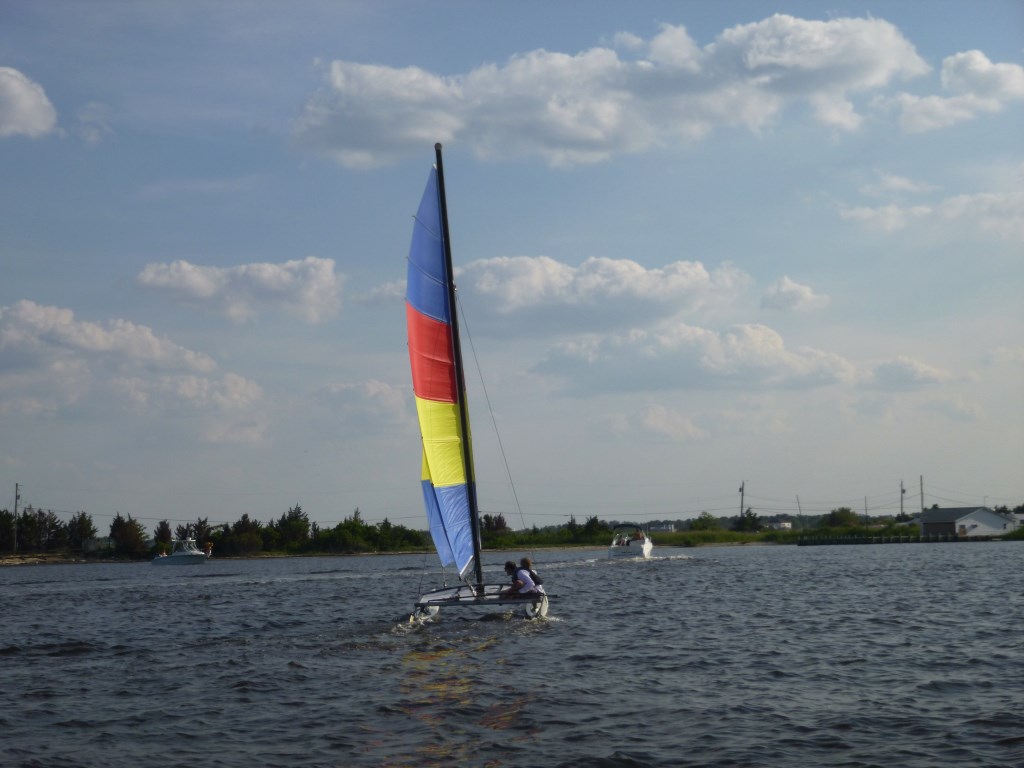 After having some sandwiches, we returned to Trixie’s, where we were stuck in a holding pattern for what felt like hours waiting for some stupid jetskis to get off of the ramp. At first I thought that the smoke was from Downe’s Fishing Camp, where they’ve been ceremonially burning their docks or some sort of flotsam, but when the jetskis finally left it appeared that they’d reversed the usual gasoline to oil ratio in their fuel. We were eventually able to get Fortuitous safely back on her trailer, working around the team of stumbling drunks who were trying to park their floating boom box.

It’s a good thing that nothing weird happened as a result of our bad bird luck.