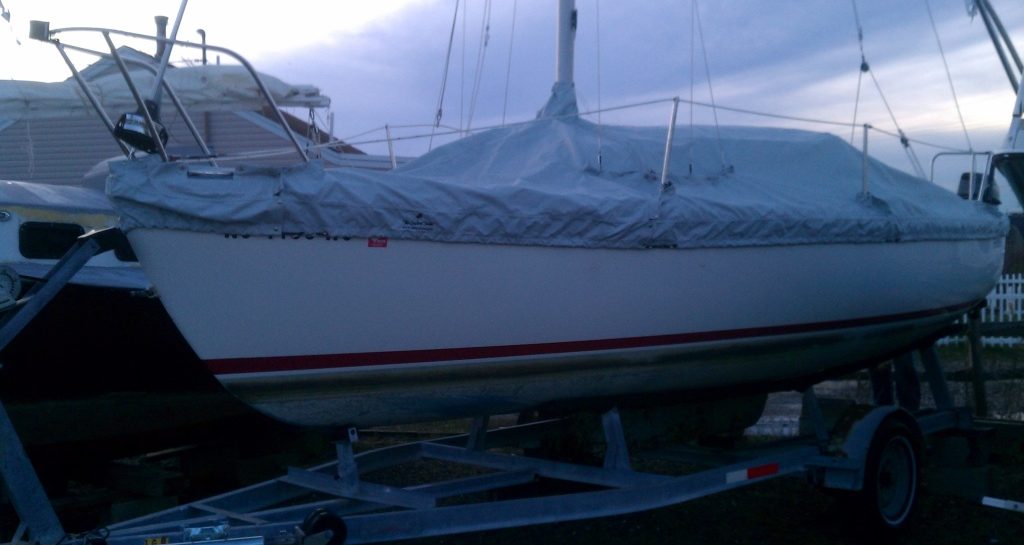 This is not going to be a particularly interesting entry, but, eh…this is a working boat log, not just a storage area for hilarious quips and dramatic sunset photos. This weekend we had a chance to go down to the shore and finish up our winterization efforts.

It was really warm for late November. A couple guys were pulling sailing dinghies out as we arrived, and I helped them get them on the trailers. One was a gaff-rigged catboat, but with a hull more like a Lightning than a Barnegat Bay cat*. I didn’t really get a good look at the other one, but it was a small sloop, I think.  I was pretty jealous that they got to sail, and it made me kind of wish for a simpler boat, or at least a simpler winterization routine for Fortuitous.

We removed the remaining removable things—namely the fuel tank, battery, stove, anchor, and the last of the running rigging. Jen found a wasp in the anchor locker, who I guess was trying to extend his season too. We made sure that the bilge was dry and started the large-scale origami project of putting on the cover. This will be season 2 for the cover (or 1.5, since we didn’t get it on until February last season), but it’s not the sort of thing that lends itself to being easier the second time around. It’s a really nice custom made cover, which means that it’s got little cutouts for every stanchion, shroud and stay.  It also means that it’s got like 7000 snaps and toggles that all need to be connected correctly if it’s to fit.

We figured it out though, eventually. We even got the “witch’s hat” (a.k.a. the witch’s teat, when installed in sub-freezing temperatures) set up with the help of a 2×4 and a lasso made from our multipurpose reefing line. I’m not sure if it actually works, but it’s supposed to prevent the cover from sagging over the cockpit and collecting rain and snow

In the relative excitement of getting the cover on, we almost forgot to tie it down. Jen fortunately saw the tie-downs in the truck as we were starting to leave and we put them on, practically in the dark. We said goodbye to the boat, and are already looking forward to spring.

* I specifically refer to these as Barnegat Bay catboats as a matter of Jersey pride, although there is some disagreement over the actual source of the design.  Here’s an essay on the topic, courtesy of the Tuckerton Seaport Museum:  So Where do Catboats Really Come From?