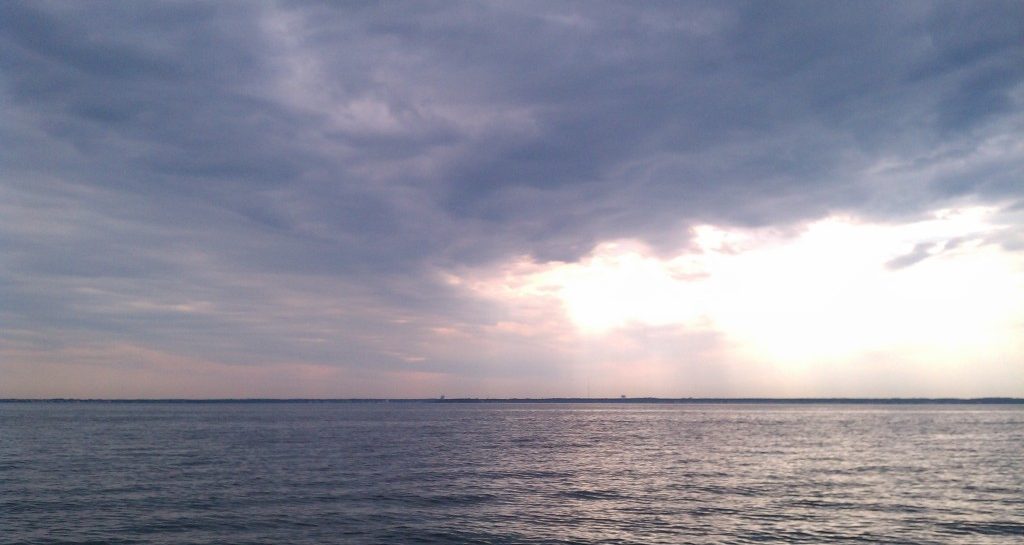 We were pleasantly surprised to be able to motor over to Governor’s Mansion today, given that we thought our outboard was still under the weather.

Our engine broke down during our cruise to Beach Haven a couple weeks ago. All initial attempts to repair it failed. Our marina is pretty renowned for outboard work, and in fact all of their rental boats use the same basic engine as our 5hp Tohatsu. Theirs are short-shaft Mercurys, but low-horsepower Mercurys and Nissans are actually rebranded Tohatsus so the guts are the same. In this case, it wasn’t a common problem though. They checked it with a known good ignition coil and CDI (?), which is what our Commodore had suggested, and it wasn’t either of those. The last we heard, they were waiting for parts to get into the more exotic stuff.

We decided to go down to the boat anyway and deal with some lingering maintenance issues. I recently found our copy of the original Craigslist ad for our boat, and among all of its praises (which were true), it did say quite specifically: “The trailer could use some new carpet on the bunks, but the existing carpet will get you through the season.” Well, that was August 2009, and this is obviously one bit of maintenance that we didn’t jump on.

I’ve actually had replacement bunk carpet since the beginning of last season, but there never seemed like a good time to do it. Obviously, the boat needs to be off of the trailer to replace the carpet, but until this season I had never launched the boat by myself and if Jen and I were at the shore at the same time, eh, like the license plate holder says: I’d rather be sailing. So it took a bum motor and some new bottom paint (both on the boat, which I’d like to protect, and caked on the bunk carpets, which I’d like to remove) to actually get me to break out the staple gun.

As it turned out, the motor parts must have come in.  By the time we arrived, the marina had already fixed our motor and put it back on the boat. If I barely knew what the coil and CDI were, you can imagine how familiar I am with the exciter and the pulser. I did look up what they were (they alternately seem to be called as the stator and trigger) and it looks like they’re parts of the magneto (or whatever you call it) that makes electricity way upstream in the ignition process. For the purposes of this log entry, suffice it to say that these are engine things, and replacing them fixed our engine.

I briefly considered ignoring the bunk carpets [again] to go sailing, but Jen convinced me that we should just get it over with. My imagineering of how this would go was way more complicated than the actual process. The old carpet came off like a clementine rind, and the new carpet installation looks surprisingly professional. We just took it slow and made sure that everything was well-stretched before stapling it. I even like the new gray color, although I guess if I really want it to look good now I need to paint the fenders. We also replaced the trailer jack for the third time. We’re now going with the “use the cheapest piece of crap you can find” approach, since the nice ones don’t seem to make it much more than a season anyway. 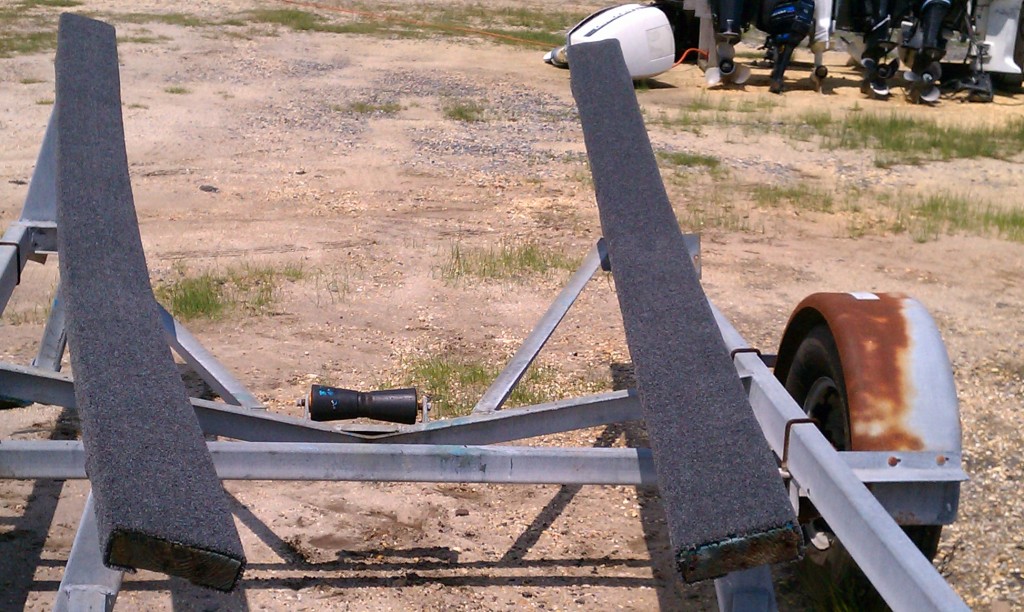 We couldn’t leave without testing the engine though. After a couple easy starts moving the boat around the marina, we took her out and puttered around a bit in front of Berkeley Island. All seemed well and we motored across the bay to Governor’s Mansion. The wind was coming straight off the ocean so it was on our nose for the ride over, but we had reasonable shelter once we got tucked in behind Island Beach. We had a chance to use the anchor for the first time on purpose (or at least in a non-emergency situation) and I went for a swim to see how well it set. Without any crazy backing down, it was buried on the first try, with only a few inches of rollbar above the sand. Pretty reassuring. 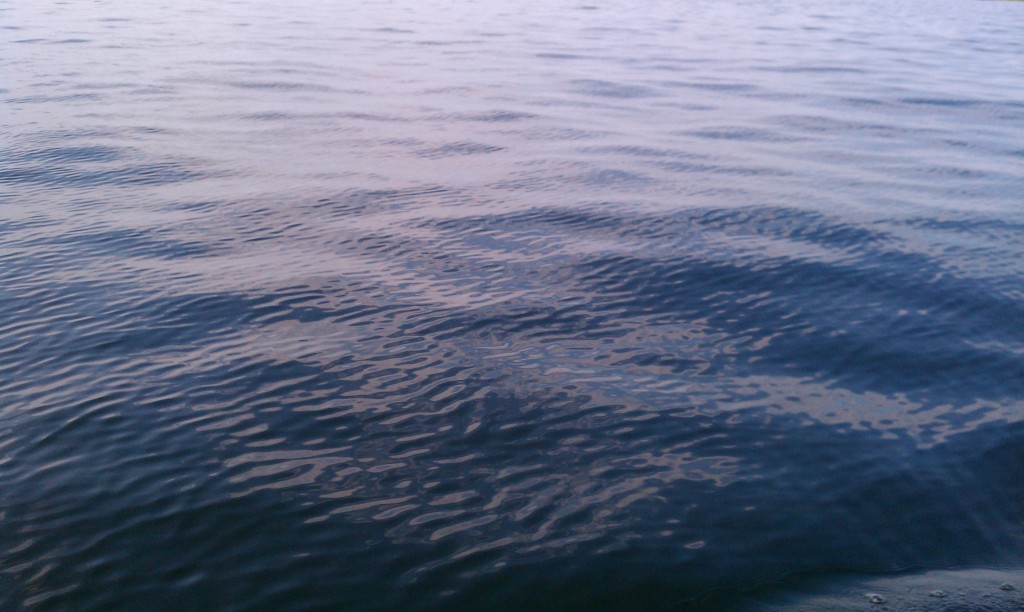 It had been hot and sunny while we were working on the trailer, but the clouds rolled in while we were testing the engine. We hung out for a while, but it was a pretty lazy day on the water for us. I thought that we’d be able to sail back, but the wind had dropped to near zero by the time we left the anchorage, giving the water an unusual texture.

Although we didn’t get to hoist a sail, at least motoring back give us another chance to test the engine, and everything still seemed great. Hopefully our issues are resolved. The scene back at the marina, with rays of sunlight breaking through the clouds and framing our boat, looked like something from the section of a truck stop where they sell the crudely constructed religious/inspirational tchotchkes. I’m taking this as a sign that whatever bad juju we’d picked up on the Beach Haven trip has been expunged. 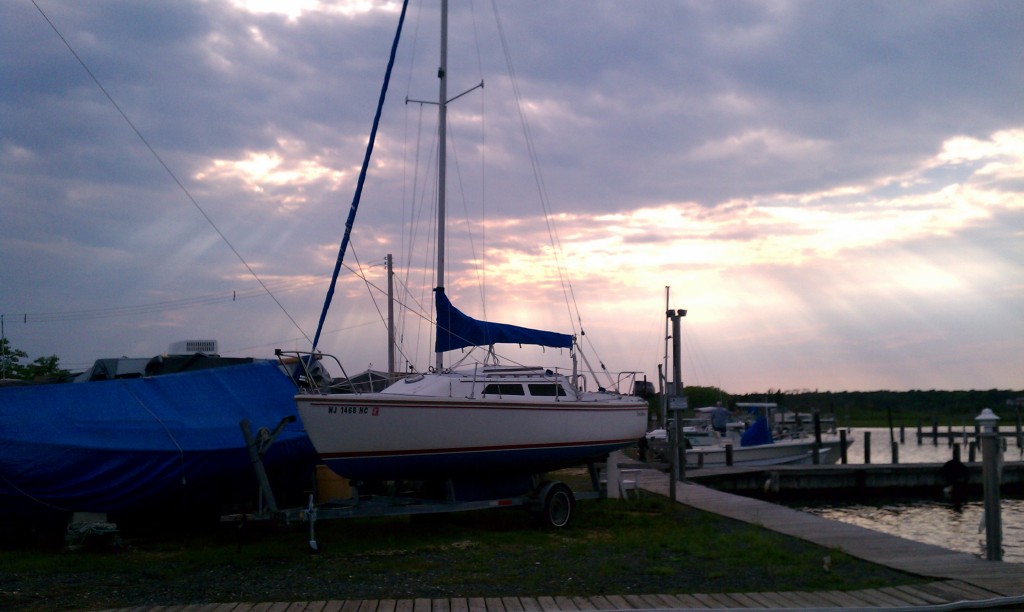