We spent the first part of Labor Day weekend down in Teal Point with our friends on the Cabin John Creek, a tributary of the Elk River. One of the highlights was helping JB with the maiden launch of his new-to-him Hobie 16.

We rigged it on the trailer first, just to see if it had everything that it needed. It came with a mainsail, which may have been original to the boat, but JB had purchased an upgraded main so our first task was to get the old one off of the boom. It had clearly been on there for a long time, to the point where mud wasps (or something) had caked up the ends of the track beyond the bolt rope. We had to tie the boom to a tree and pull the sail off tug o’ war style by the outhaul grommet to get it out. Then we found out that the new main was loose footed, and we didn’t have a car for the clew… The original sail went back on much more easily than it came off (after a thorough cleaning of the track and some McLube) and we stepped the mast without too much trouble.

For transport, we had to lower the mast again to get through the trees. I used the typical boat launching tools: lopping shears and Miller High Life (The Champagne of Beers).

The mast raising went pretty smoothly, especially after Michael figured out that we were initially at the wrong angle with trying to connect the forestay, and the launch was no problem. JB had his first sail in very light winds, but eventually made it back to the dock with the help of a little paddling. A few battens and a jib, and she should be a really fun sailing machine. 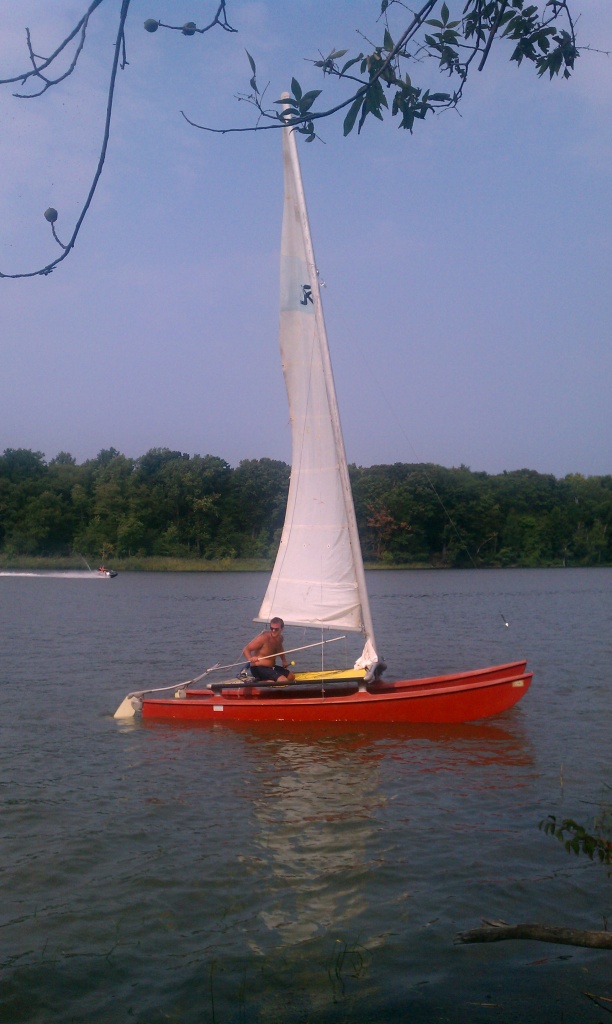