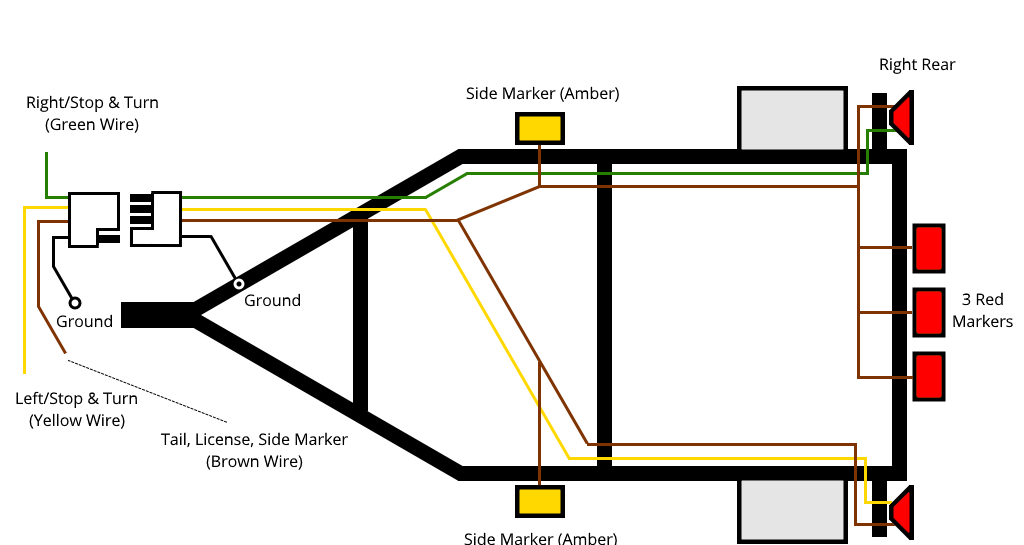 We woke up on Sunday with two goals: tow Fortuitous 25 miles and put up the mast. As previously mentioned, when we moved the boat away from the marina for Hurricane Irene, our trailer lights weren’t working, so that complicated Task A. Under the aegis of an impending natural disaster, with most of the area evacuated, I think I was within the broad realm of reason (if not safety) to drive around in the dark with no lights, but it wasn’t going to fly on Labor Day weekend.

Additionally, I didn’t really want to permanently install new lights, or go through a laborious troubleshooting process. Val suggested making a sort of removable bumper out of a 2×4 and mounting the lights to that, which seemed like a great idea since we rarely tow on the road but frequently dunk our trailer in salt water. But I didn’t want to make and fit that in place in Val’s yard, so the plan was to get a new light kit, half-assedly install it, then remove it to make the bumper at a later date.

Getting the old lights off, however, proved to be a challenge. The nuts turned easily enough, but they weren’t backing off. I figured I had to take the lens off to put a wrench or screwdriver on the inside to keep the bolt from spinning. When I touched the screws that held the lenses on, however, they promptly disintegrated in small puffs of iron oxide. I tried prying them off after destroying all of the heads, which resulted only in me slicing my thumb, leaving me without an opposable digit on my dominant hand for the rest of this particular odyssey. Rummaging through my toolbox, I finally found a tool that would work, and proceeded to beat the lenses apart with a hammer.

Crude, perhaps, but effective. Except that the bolts on the inside were neither hex nor any kind of screw head…they were just smooth like carriage bolts. I wound up having to grab them with Vice Grips and turn the nuts with a ratchet, which resulted in four out of four bolts shearing before actually unscrewing. After torquing stainless steel apart with my bare [injured] hands, I figured installing the new lights would be simple.

Except that they exhibited exactly the same behavior as the old lights. Time to figure out how trailer electronics work.

I had followed the directions as meticulously as I’m able to follow directions, but the one part that had me concerned was a line in the troubleshooting section that said something to the effect of “if they don’t work, it’s probably the ground.”

Apparently, the typical way to wire a trailer is to use the trailer itself as a common ground. The plug on my new lights had a little 6 inch white wire coming out of it that was supposed to connect to a free bolt, and there were similar short white wires on the lights that presumably get a ring terminal and are connected to the bolt that holds the light to sheet metal angle brackets, which should be electrically one with the trailer corpus. I had no such continuity between the tongue and aft end of the trailer. Not sure if that’s a result of the tongue extension (which isn’t exactly insulated) or the state of the galvanization (Is zinc oxide a good conductor?  Probably not), but I wound up having to use the old wires from the old lights to directly connect the grounds from the truck to the lights, which worked fine.

With that resolved, we could commence with Task A: moving the boat. Have I mentioned that I hate towing? While on a logical level I know that the trailer is perfectly fine, it’s just unnerving in practice. The trailer makes a range of loud clanks and groans that could be the sound effects for a cartoon on the subject of metal fatigue, and when stopping and starting the extension has a fraction of an inch of play that imparts a feeling reminiscent of a PATH train pulling clumsily out of a station, as the couplers take up the slack between cars. I can picture so many ways that things could go very wrong, and while they’re probably not at all accurate, they’re no less vivid.

This was to be the first daytime raid on the traveling masses, and on a holiday weekend no less. Rather than make a left turn onto Route 9 at an uncontrolled intersection, I attempted to drive through a parking lot to snake over to a traffic light, which marked the first time that I’d taken a sailboat to a grocery store. I thought that was a pretty serious driving test, but then I had to drive across a bridge that was under construction, leaving what felt like about 2 inches of clearance on either side of the jersey barriers. Then, just for some spice, a dude came walking across the bridge in my lane. Then some oblivious kids lazily swerved by on miniature BMX bikes. I made it just before the clown on the unicycle juggling bowling pins tried to squeeze past, which was fortunate because just behind him were the fat twins on motorcycles.

The rest of the ride was smooth and we made it to Trixie’s in one piece, though much later than expected. I had to undo all of the work I’d done on the trailer lights or risk rotting them off the next time I launched the boat, since my crimps left a lot to be desired and there were still some twist n’ tape connections that I’d made when I ran out of crimps. Jen did a lot of work to get the rigging untangled and ready to go, but we decided to skip out on the mast raising given the dwindling daylight.