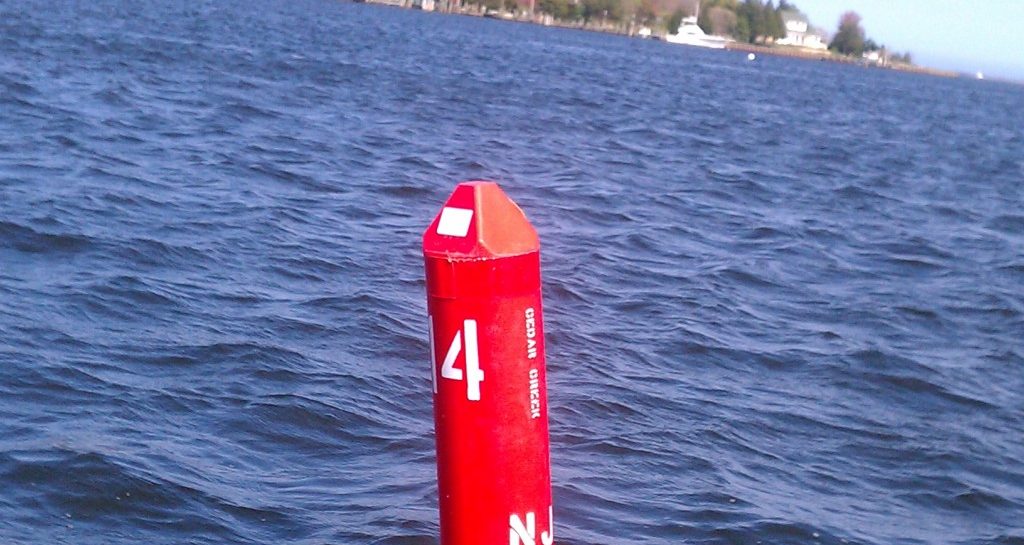 Initially, it wasn’t looking good. The forecast the night before was showing a 70% chance of rain with thunderstorms rolling through in the afternoon. I’m not sure what changed, but when we woke up it looked like we had a window, so we gave it a shot.

The poor forecast had put a damper on our preparations, so we were rushing to get out at a decent hour. We remove everything that we can at the end of the season, so there’s a lot to bring back for the first sail, some of it rather critical. Like the battens for our new main sail, for instance. I don’t really have an explanation. Jen is a compulsive lister, but I had suggested that I might make a list (which I didn’t) so she didn’t do it. I’m not sure I would have remembered to add them to the list anyway; our old main had sewn-in battens that weren’t removable. We figured we’d get the boat set up regardless and launched so that we could rig her on the water.

As we were bending on sails, the wind really picked up and was regularly gusting beyond 20kts, which made sail handling extra fun. There was no sign of rain though, and I was really itching to get out there. We thought maybe we’d do a quick motor tour.

…and that’s when we realized that I’d also forgotten the fuel line. Fortunately Trixie’s had all the parts to build us a new one, but by the time we got all that figured out it was 1445. We motored out of the cove to an angry bay full of whitecaps and bluster.

We turned to starboard and headed south, straight into wind. The bay was amazingly empty. There were a couple fishing boats lurking, as well as some windsurfers who were apparently loving the breeze. They were making high speed runs, jetting back and forth across the bay with the wind on their beam (or whatever you might call that on a surfboard.) 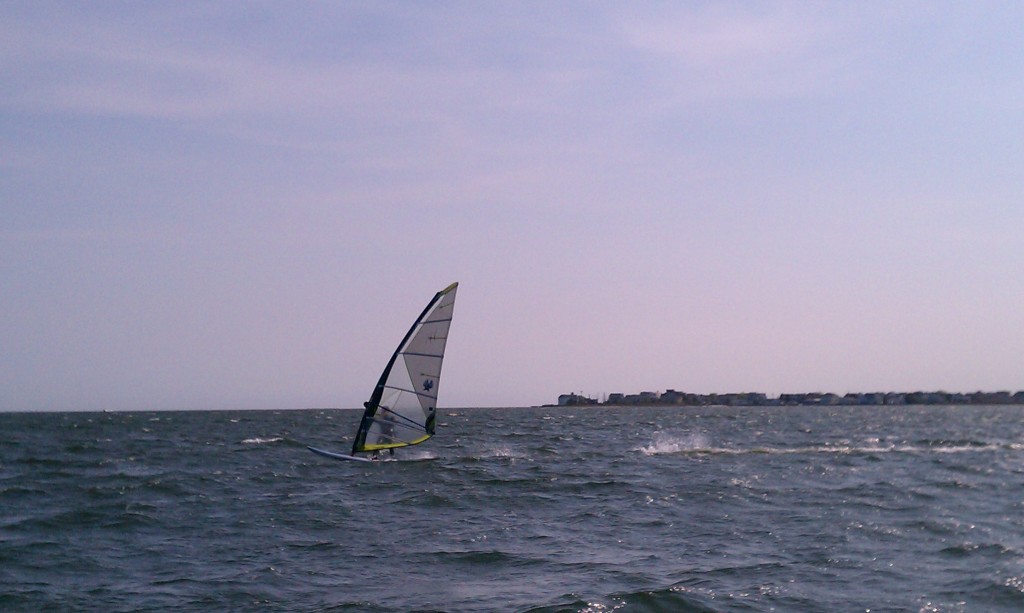 We decided to tuck into Cedar Creek to try to get out of the wind a bit and leisurely motored over to CCSC. Lots of Windjammers were getting their boats ready for the season and we lingered for a bit to say hello to the crew of Waterloo. In comedic understatement, they declared that the bay looked “lumpy,” but I kind of took that as a challenge.

On the way out of the creek, we put out half a jib and started sailing in spite of the weather. I was expecting a certain amount of squirreliness so we cross-sheeted, enabling Jen to stay on the high side of the boat to trim the jib while I momentarily remained to leeward to control the furling line and pull up the motor. The boat was well behaved though, and we sailed almost all the way across the bay before turning northward on a long downwind run to marker 39. 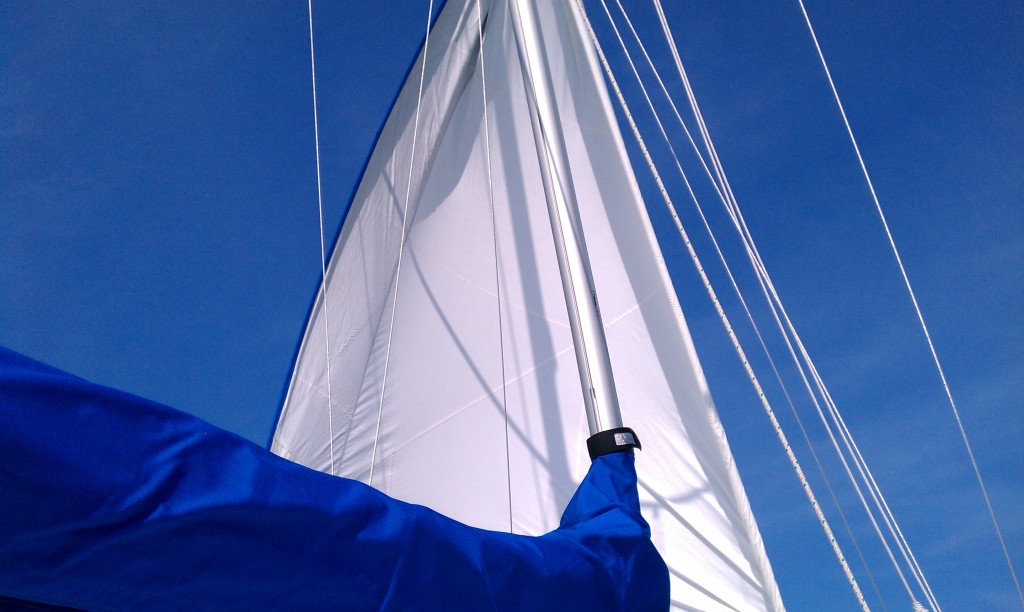 The wind continued to increase and beating back to the marina would have been obnoxious, so we motored (which was still rather obnoxious.) The wind was almost perfectly aligned with the bay, so there was plenty of fetch to conjure up some large waves, and we pounded quite a bit on the way back. I was glad to have my foulies, as it was a wet ride. There’s nothing wrong with getting a little taste of salty spray early in the season though—it served as a corporeal affirmation that we sailed.

There was a time not too long ago when we would have been nervous to be out there with gusts in the mid 20s, but we were respectful and never felt out of control. I’m really glad that we decided to unfurl a little dacron. It wasn’t anything monumental, and it wasn’t even really a complete shakedown, but we had a real sense of pride in being the only keelboat out there. 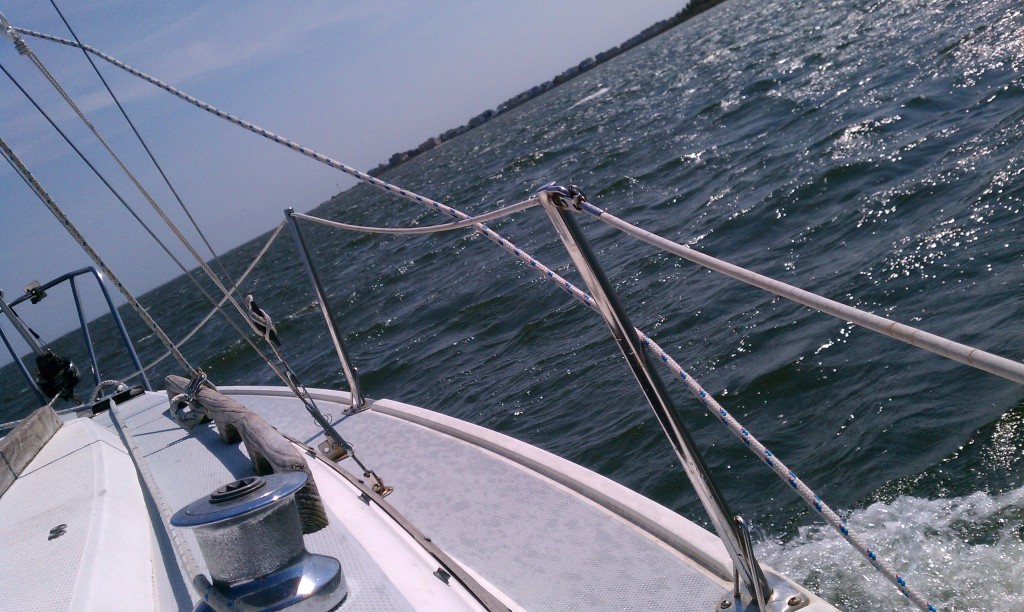