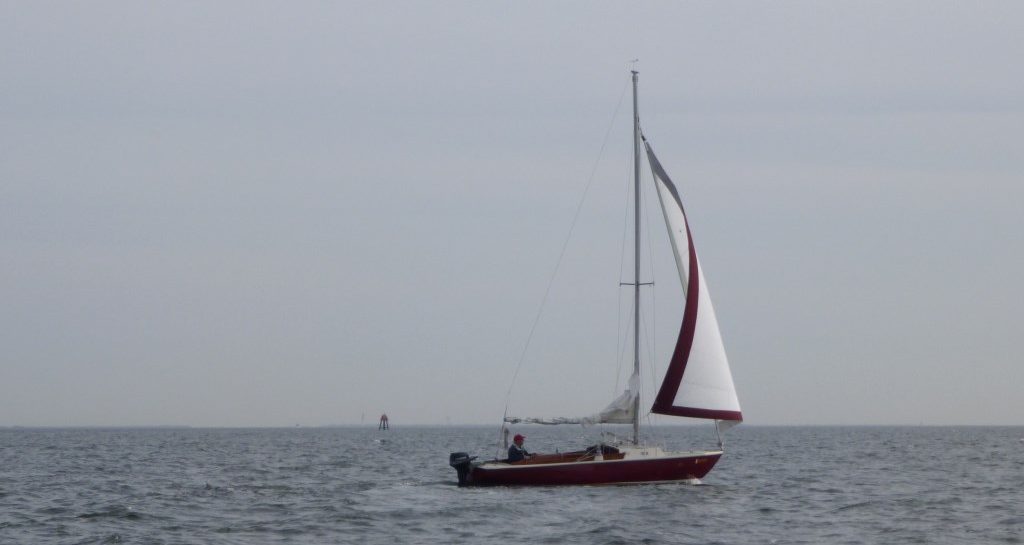 High winds, steep chop, a million boat wakes…our bay can be a bit chaotic at times. But every once in a while we catch it right, and things become as Koko Goldstein intended: smooth. 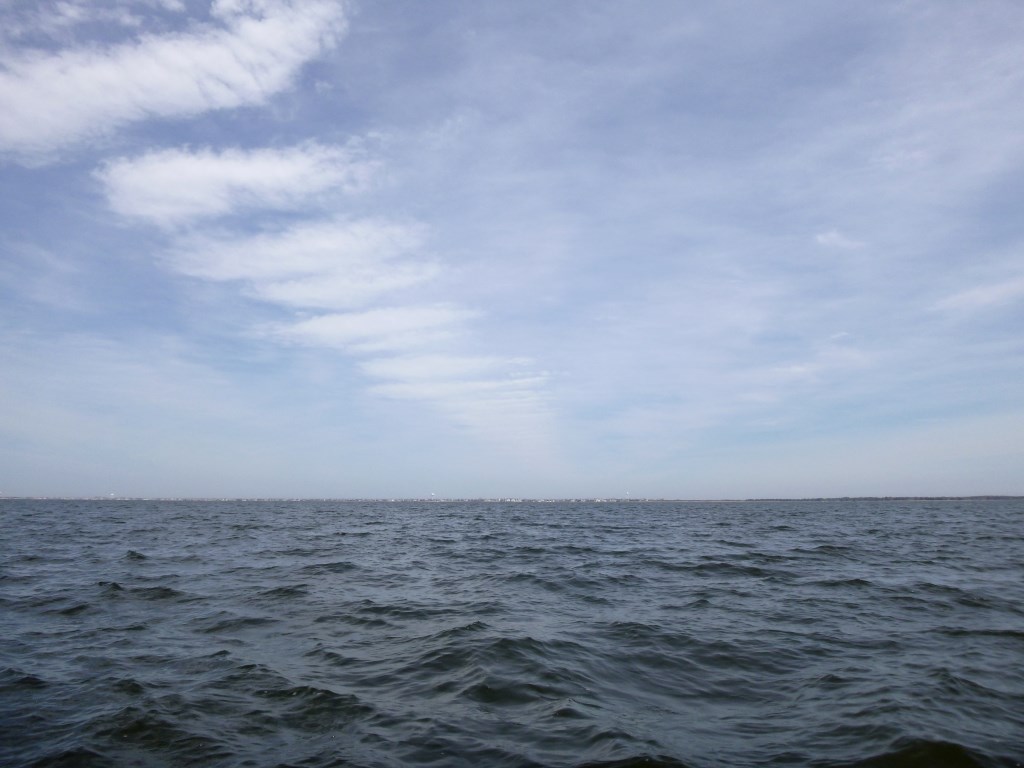 Even the clouds were chilled out. I have no idea what the dotted-line formation implied. At first I thought that they might be some kind of distorted, wind-blown contrails, but they stuck around for a long time: 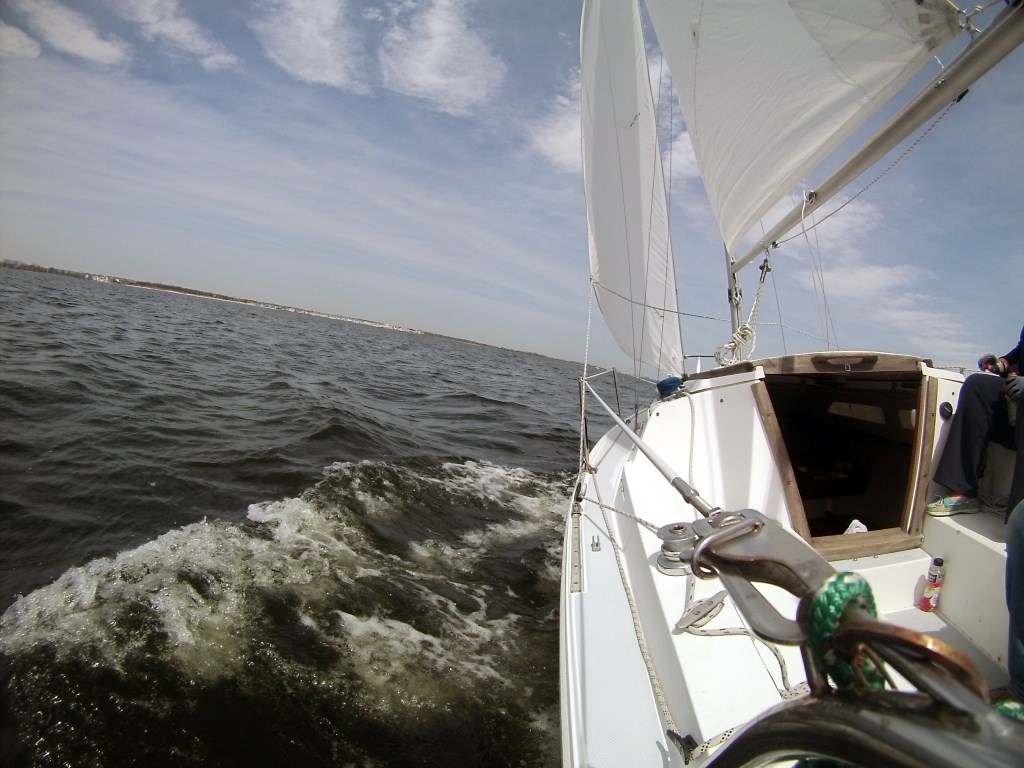 Winds were light, but steady, and plenty enough to blow us around the bay. With a predicted northerly, we had considered sailing up to Toms River to take advantage of a nice downwind run home, but they turned out to be more from the northeast. We still headed that way, just to see what was shaking up there. Between markers 39 and 38 it became clear that we wouldn’t be able to make the turn around Good Luck Point in any sort of leisurely way. We thought briefly about short tacking it or firing up the motor, but eventually decided to just turn around and sail the other way.

Jen was at the helm for that leg, trying to log some positive experiences at the tiller. I think it was a good day for it, and she did great. As we tacked around, I took over at her request. I was expecting to be on a broad reach, but we move pretty well in the light stuff, and I guess our forward progress makes up a greater percentage of the apparent wind, because the wind was nearly on our beam. While not particularly invigorating, we were making good time without much effort, and were perfectly relaxed. 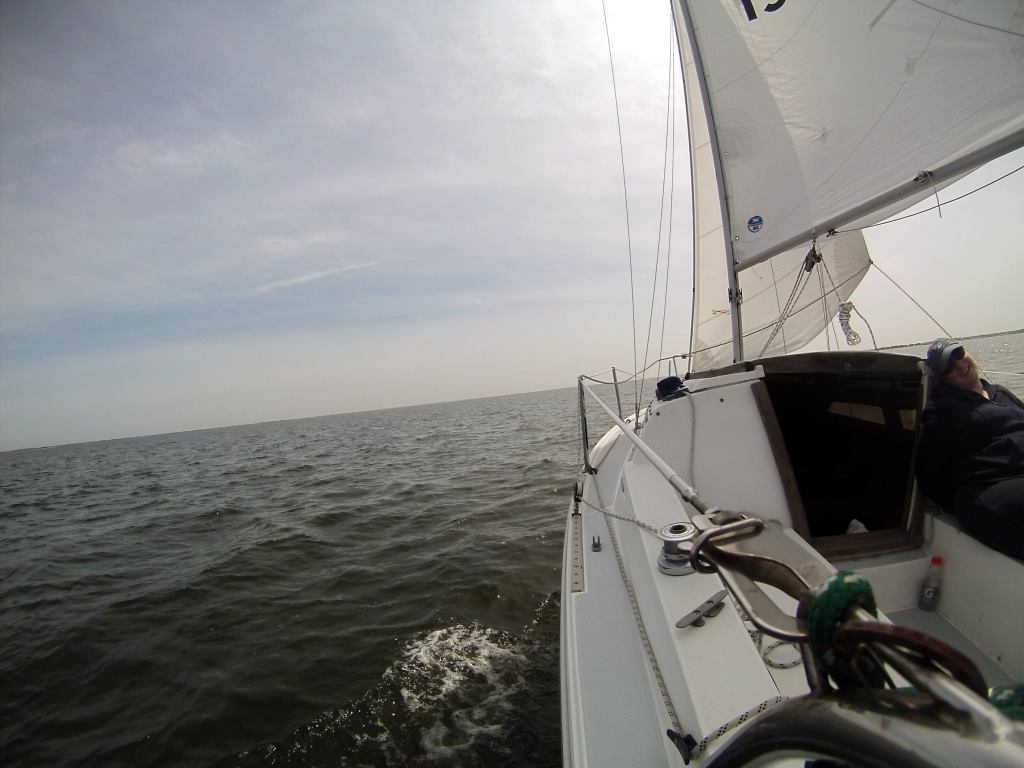 The relaxation was enhanced by the fact that there was almost no traffic on the bay. It’s still very early in the season, and most boats are still on the hard. As we came around 40 though, I did see sails on the horizon, down by Forked River, so we threw on a little vang and turned to intercept. It wasn’t initially clear if they were sailing north or south, but the closing speed implied that they were coming at us. It was a big Freedom, and we passed close enough to exchange a courteous wave. 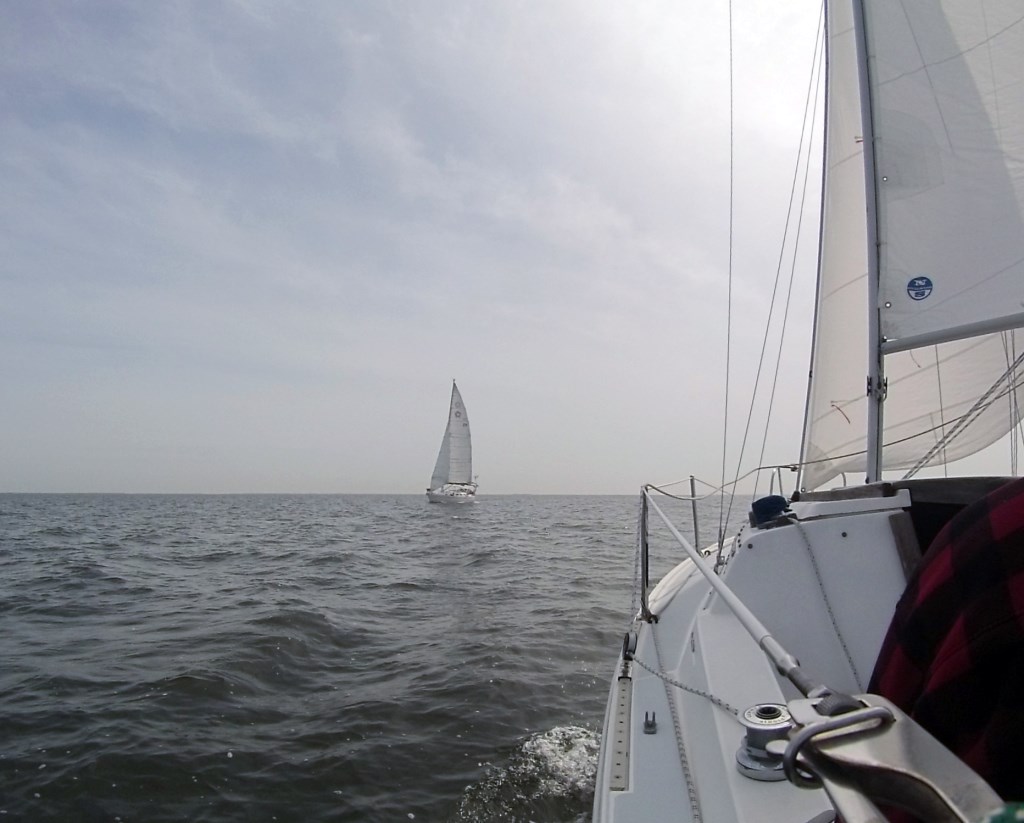 It was getting a little cold, so we turned around just south of BB and headed back toward the marina. We took the long way, sailing a close reach out into open water and then coming back on a broad reach toward Berkeley Island. There was a small boat with a dark hull sailing on just a jib, close to the island, which was the only other sailboat that we’d seen all day. It turned out to be Chianti, one of the Pearson Ensigns from our club, and he turned to do a sail-by on us as we stood on.

“Where is everyone?” He asked.

I shrugged an overly-animated shrug to express my apparent bewilderment. “Great day for sailing!”

We won’t always have the ability to launch whenever we want—it’s much easier (and cheaper) on a small boat, and we hope to eventually extend our cruising range by moving up to a larger boat—so we’re trying to live it up now. We didn’t break any records or anything today, but sometimes a relaxing sail around the bay, before the season is in full swing, is exactly what’s needed. We’ll try to keep this sail in mind the next time we’re caught in a swirling tempest of spindrift and foamy madness…they can’t all be this smooth.