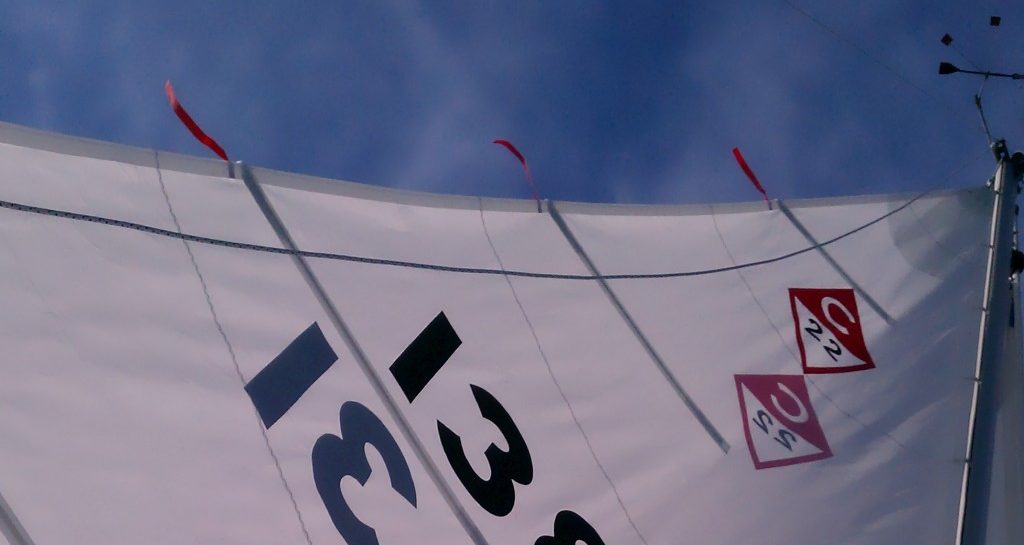 With predicted light winds and warmer temperatures, we planned on getting to the boat early and having a full day of sailing—possibly testing our new anchor and making lunch on the water. “Planned” being the operative word. We still made the best of it despite some setbacks.

No reason to dwell on what delayed us, so I’ll just put it in bullet form:

Anyway, the motor eventually started. Nothing changed. We didn’t identify a problem, change a component, or do anything that should have fixed it other than pull the cord four (maybe five) thousand times. The one piece of information that I left out when talking to the mechanic was that while cleaning out the fuel locker (including dousing everything within 20 feet with the hose—Jen even shot herself in the face at one point) I had removed the fuel line. My fear/hope is that we got the thing wet where the fuel line connects to the engine, and that once we (he) got that water out of there, it was fine.

Our plan to leave early and spend the entire day sailing had devolved into us shoving off at 1530. “Salvage” was probably a poor word to use in the title of this log entry since salvage has a specific and quite negative connotation in maritime lingo, but for the brief amount of time that we did have on the water, we made the most of it.

Winds were southerly around 5kts or so with the occasional puff to 10 or 12, so we were able to run wide open with full sails. We beat south, expecting to be able to breeze back downwind. Jen took a long turn on the tiller. Her instinct is still to call for help in the gusts instead of lightly heading up or letting out the main sheet, but I tried to talk her through it instead of just taking over, as she was vehemently demanding. We spent some time with me steering, but with her in the helmsperson’s position so that she could keep a hand on the tiller too and feel how I pushed the boat up a little in the puffs. I have no idea if this is sound teaching technique or not, but hopefully it will help her build some confidence. The winds were light so I think it was a good day to practice. The conditions weren’t really such that letting out the sheet or heading up were required—the boat would have happily kept sailing, just heeled over 10° more, but that kind of change in heel seems to be unnerving.

We sailed down past BB and were considering making for BI when the wind suddenly stopped. We drifted for a bit until it eventually came back, though it was then more from the east. Jen wanted to try executing a tack or jibe, but by the time the wind resumed, we had already naturally spun around and got a jibe for free. All we had to do was move the genoa over. We decided to take advantage of whatever wind was left and headed back toward home, now on basically on a beam reach. Jen again took the helm for a long stretch and had no problem sailing us most of the way back to Trixie’s. When the wind stopped again, the engine started as if nothing had ever happened, and we motored the last quarter mile.

We didn’t take many pictures, but we did see an interesting cat ketch on the way back, which is not something I’ve seen on these waters before. And again, the main performed admirably.

All in all, it was a good save. I’m glad we got some sailing in, but I’m still hoping to catch a day of sustained boating in the near future.