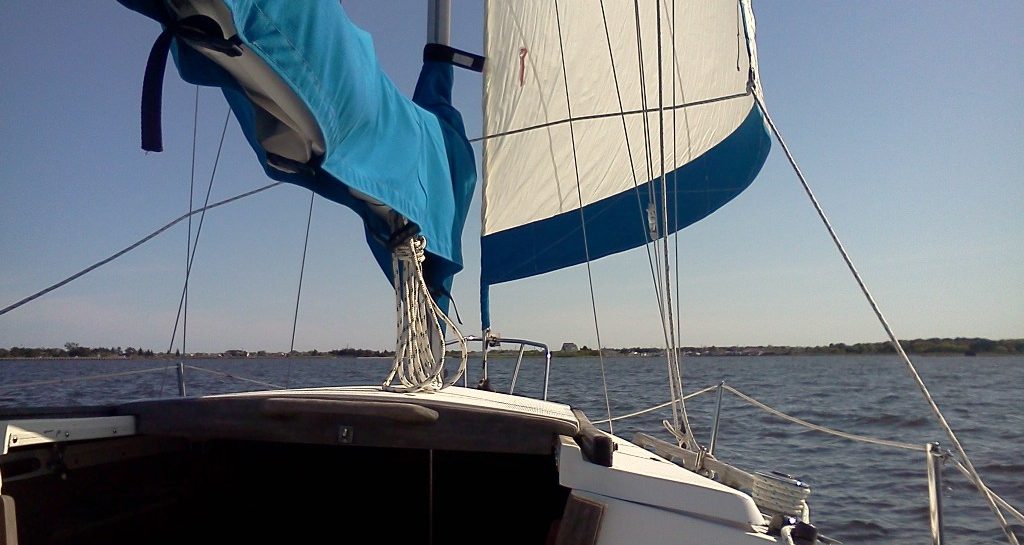 This was supposed to be a maintenance day. Jen had a family obligation, so I went to the shore by myself to address some minor upgrades and repairs. 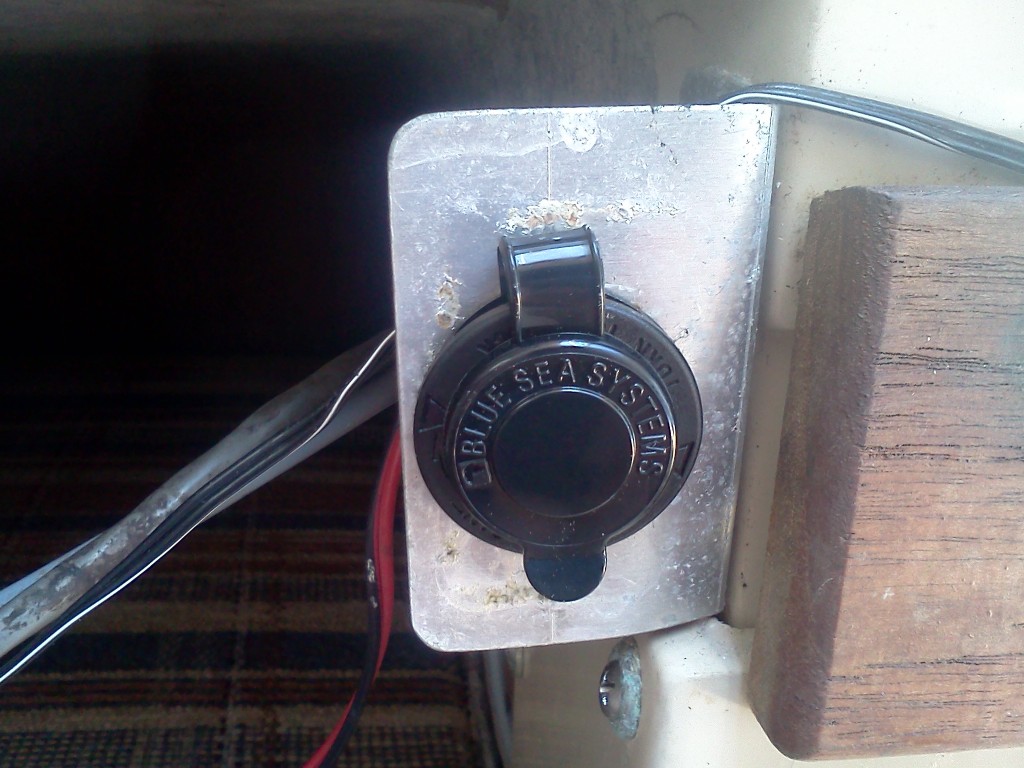 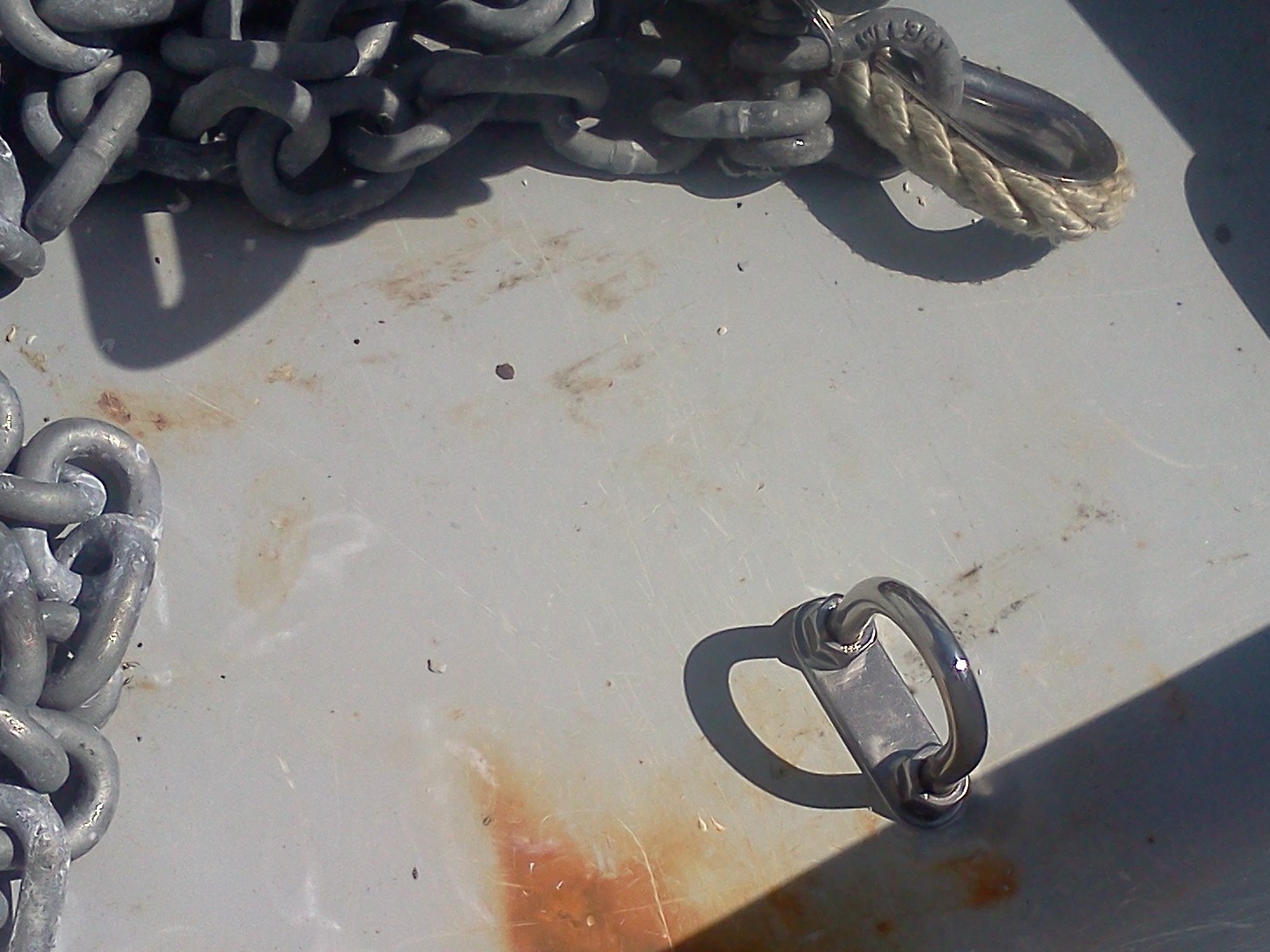 First I replaced the 12v power outlet. Ours was kind of corroded and finicky. I thought the old mount was bad, but upon further inspection it’s actually fine, so it turned out to be a drop-in replacement. Even the crimps on the existing quick-disconnects were in good shape. I also added a terminal in the anchor well for the bitter end of our rode. This is one of those things that we’ll probably never need (the boat has made it this far without one) but it seemed kind of silly to not have one. I put a stout backing plate on it, so that just in case it ever comes into play it doesn’t rip the deck out. This picture also implies that I may need to clean the anchor locker, which is probably a task for another day. 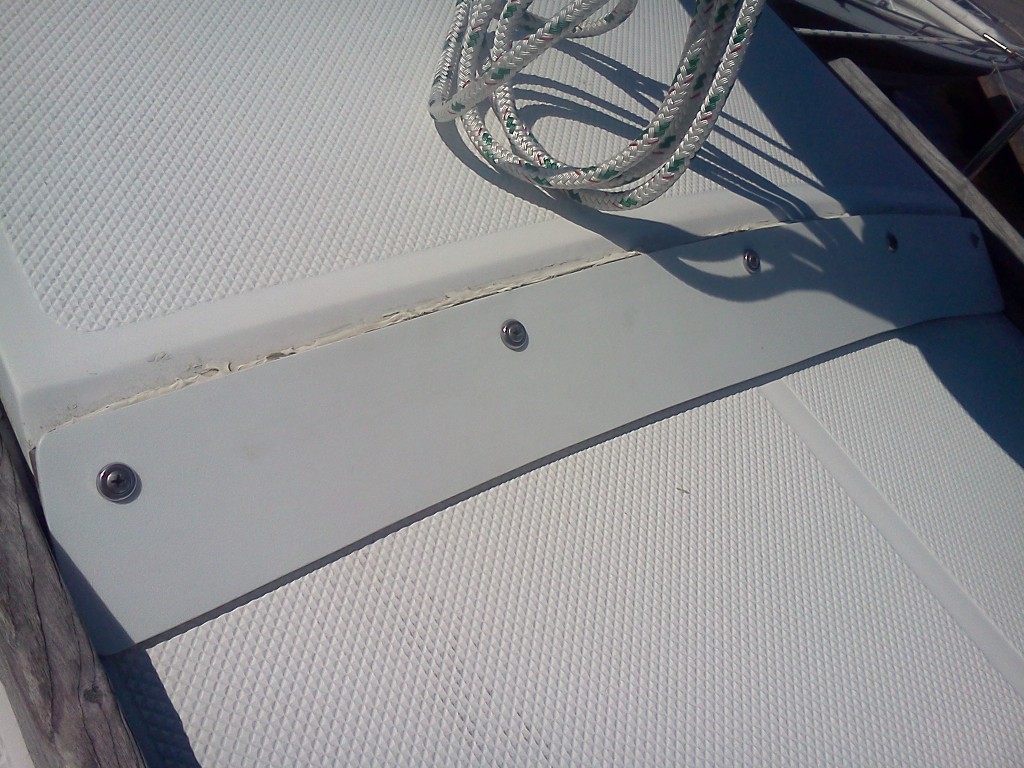 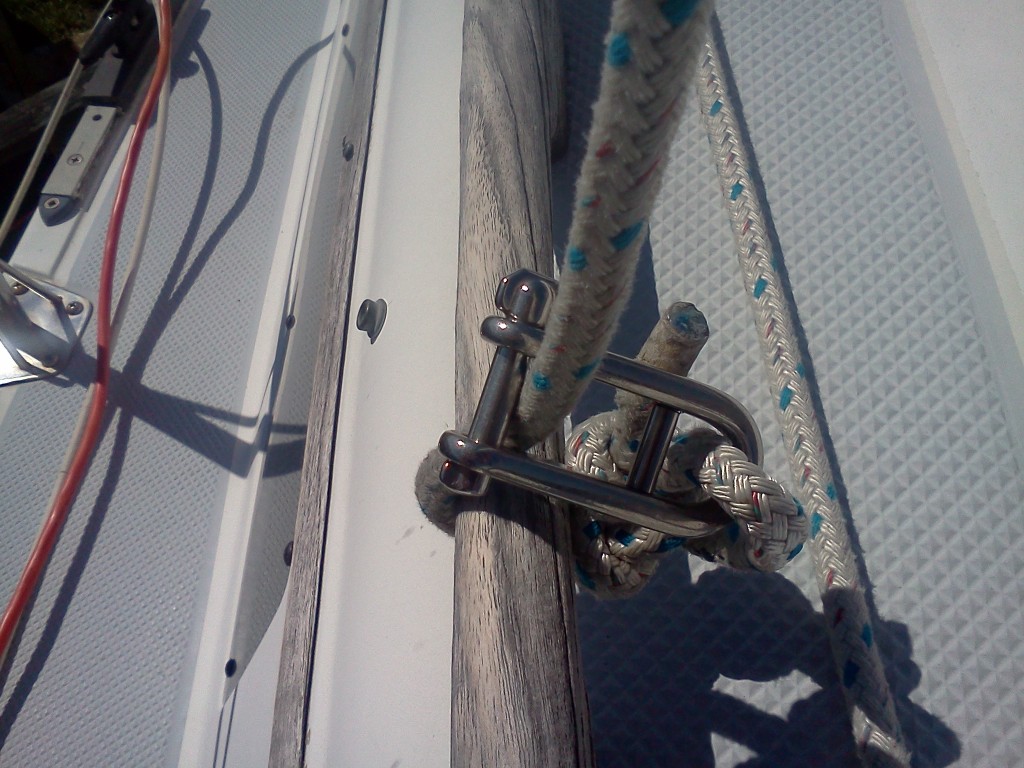 There used to be thin piece of teak on the forward edge of our main hatch. I’m not sure what it is, or if it’s original or what (Catalina Direct doesn’t sell them, and they sell pretty much every 22 component). I guess it’s ostensibly to keep spray from pouring into the cabin under the hatch, although in practice its main job has been to keep the piece of steel on the leading edge from dragging across the non-skid on the the poptop. The teak split earlier this year, so before it completely disintigrated I removed it and used it as a pattern to make a new one out of Starboard—plastic sheet similar to those weirdly slippery plastic cutting boards. I think this should do a good job of protecting the non-skid and possibly keeping rogue waves out of our cabin without all the downsides of teak (i.e., it won’t look like hell if I don’t varnish it ad infinitum). The goo visible above it is not from this repair…nothing sticks to Starboard, so I didn’t bother sealing it. I will eventually try to remove the leftover caulk, but it’s really on there and will probably require some ridiculous solvent to get it off. I also replaced our sticking halyard shackle with the real deal: a Wichard drop forged key pin shackle.

My next task was to replace the trailer bunk carpets, which of course would require getting the boat off of the trailer. I’ve never launched or retrieved the boat by myself, but I thought it would be good practice for singlehanding if I ever get up the nerve. My plan was to launch the boat, tie her up to the end dock out of the way, deal with the trailer, then pull her out in time to get to a dock party at the sailing club.

Launching went surprisingly smoothly. I’ve been working out the steps in my head, and as long as the dock lines and things are prepared correctly it’s not that big a deal. The only problem was that Fortuitous was looking really good on the water, like she wanted to go for a ride. I’d already completed a bunch of maintenance, and I figured I had the time, so I convinced myself that I should go for a brief motor to practice being alone out there, lashing the rudder, docking without crew, and that sort of thing.

So I threw on a PFD and cranked up the engine. I was feeling pretty good about myself. It seemed like a good idea to practice putting the keel down, even though it’s not absolutely required for motoring, so as soon as I got past the grassy point I secured the tiller, verified that I was going basically straight, and went forward to wind down the keel. Immediately after I got it down, the engine quit. If anyone would have been there to see it, it’s entirely possible that I would have looked panicked, but I feel like I rather deliberately went aft and tried to restart it. It wasn’t having it though, and with the easterly wind I was drifting precariously into the marsh. I briefly considered dropping the anchor, but the 22 feet to the bow seemed like 22 miles. Instead I popped out the jib and sailed off of the lee shore as if I’d intended to do so all along.

I felt triumphant, or at least some blend of exultation and lingering anxiety. I collected myself on a very slow beam reach to the north with a half a jib—I wasn’t sure how any of this was going to work out and had conservatively only unfurled a small portion of jib. Whenever I imagined singlehanding it was always on the mainsail, since that sails better and is easier to tack, but since I was already thrown into this I rolled with it. Raising the main in a hurry by myself wouldn’t have been an option since it was completely stowed.

Between the poor boat speed, unbalanced sail configuration, and my inability to control two sheets and a tiller with only two hands, I was concerned that I might not be able to tack. I figured that I should test it while I was in deep water with room to screw it up. She came about slowly, but she came about. I intentionally held the active sheet a little too long to backwind the jib and help complete the tack. As I got some confidence that that this was actually working, I put out the rest of the jib, which allowed me to point much higher and make better speed.

I didn’t go very far or stay out too long. I messed around with different points of sail and tryed to get the helm balanced (which is impossible on this boat with only one sail), and then started thinking of how I was going to get back. The motor did eventually start; it just wouldn’t stay running at much less than 3/4 throttle.  I pulled up the rudder and keel and made my best attempt at preparations for a hard landing. It might have been easier and more controlled to come in under sail, but even with the light winds I wasn’t comfortable flying the jib with the keel raised so I didn’t have much choice beyond calling up bursts of power with the transmission. Any docking that you can walk away from…

So while it was kind of a surprise to find myself sailing on my own, it turned out to be a blast. Getting stuck in a marsh in 6-8kts of wind and 6in “waves” isn’t exactly mortal danger, but I was pretty proud that my sails and my natural reactions got me out of it. Some day it could be a rocky shoreline in much more serious conditions. I’m looking forward to having a chance to do some intentional singlehanded sailing sometime soon.