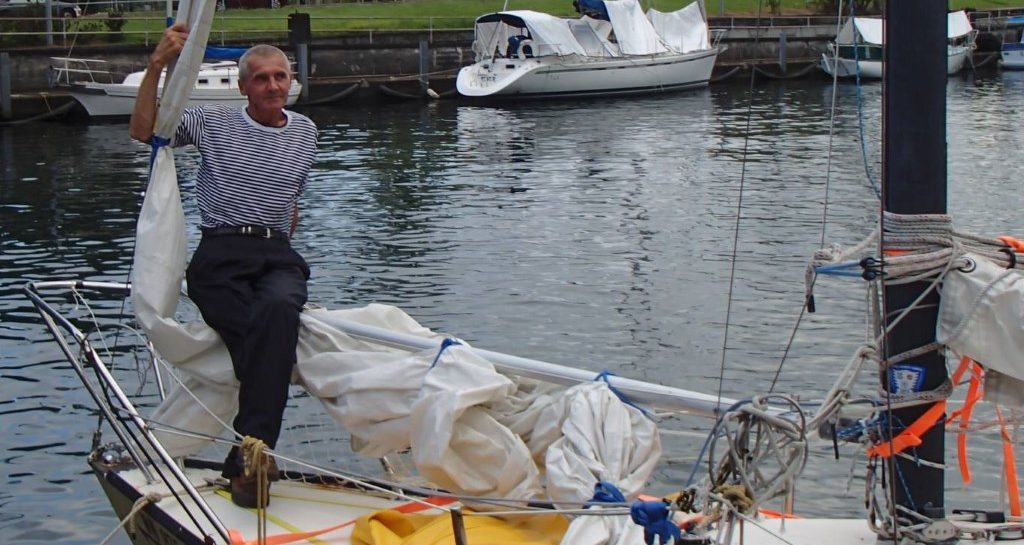 Charles Darwin, The Descent of Man

Right now, there’s a guy bobbing around the middle of the Pacific Ocean on a 24′ San Juan sailboat. He claims to be in the process of sailing solo around the world. Some have called him a hero—living the dream of so many cruisers and wannabe cruisers. Others have called him an idiot (or worse), lacking the skill, preparation, and the boat for such a voyage. He calls himself Rimas, and I’m way too deep into this train wreck to look away now.

The details that surround all of this are somewhat sketchy, and this log entry probably lacks the academic rigor for which sailingfortuitous.com is known*, but I’ll attempt to briefly point out some of the highlights. According to latitude38.com (1), Rimas Meleshyus left the Soviet Union in 1988, by inexplicably seeking political asylum in the Iranian Embassy in Moscow, followed by stints in New York, St. Thomas, Guam (giving tours in Japanese), and San Francisco. At some point in these travels, he got into sailing, and in May of 2012, he attempted to sail across the Gulf of Alaska in a San Juan 24 named Cesura (2) that he purchased in Juneau. This was his first boat, he’d only been sailing for a year (3), and it showed.

Among other things, in the 34 days that he was at sea, he got hit by a whale, was knocked down several times in a storm, and then nearly got run over by several ships as he tried to navigate the shipping lanes near the Aleutian Islands. He had stayed up for 3 days straight dodging ships, and in his fatigue wound up running aground on Akutan. No one found him for 7 days, and even when a passing fisherman did, he refused to accept rescue, thinking that he would find a way to float the boat off. Two days later, the Coast Guard persuaded him to take a helicopter ride to safety. Still, he was undeterred. He wrote:

“I’m already in history cross the Gulf of Alaska on tiny 24 foot sailboat.”

He immediately started looking for donations to try to get another San Juan 24 so that he could resume his circumnavigation. The SJ24 is a nice little boat, but it’s not widely regarded as a blue water cruiser. It’s a daysailer/weekender, designed for inland and light coastal sailing. It can’t carry the water, fuel, and supplies that would ordinarily be expected for an ocean crossing, and structurally, it’s not built to withstand the beating that a boat is likely to receive when sailing beyond reliable forecasts or around the great capes. Regardless, Rimas finagled himself into another San Juan 24, this one with a terrible but somehow ironic pun for a name: Pier Pressure. He also received a bunch of supplies—most notably a DeLorme inReach, which is a device that occasionally sends his position and brief messages via satellite so that his movements and thoughts can be tracked.

[Editor’s Note 12/26/2014: The following paragraph has been revised based on feedback from the cognoscente at Sailing Anarchy. Thanks for the fact checking.]

Here, the story starts to fall apart for me. Between Rimas’s creative use of English, his often contradictory statements, additional messages posted by his handlers on Facebook, and a lot of conjecture by his followers and detractors, it’s difficult to make sense of what happened next. I believe that he left from Puget Sound headed directly for Cape Horn on the southern tip of South America. He encountered tremendous storms somewhere off the coast of Mexico and lost some rigging and his engine. Only able to sail downwind, he diverted to Hilo, Hawaii for repairs. He then drifted back to San Francisco, during which time he lost contact for several days and prematurely deployed (and then lost) his life raft. Another search and rescue event was initiated, this time involving an HC-130, a Coast Guard ship, and the diversion of two cargo ships (4). He declined all assistance and made it to the northern Californian coast under his own power…then couldn’t figure out how to get into San Francisco Bay and eventually received a tow. After some more repairs and preparation, he was towed out again, where he quickly lost the dinghy that he was towing, all of his fishing gear, and ripped his sails, at which point he drifted helplessly into the Great Pacific Trash Vortex and started running out of food and water.

“Hello guys. The it was from the south me not allowed to sail and pushed me to to the westnorth again to get samoa takes long time i will run out of food no fish.”

During this time, the Sailnet Refugees were flooding the chatroom with Rimas discussions as the cryptic messages continued to show up on his DeLorme page, and I got tired of looking at the interface. I also wondered what it would look like if the messages could be pulled out so that they could all be seen at once and read like a giant incomprehensible psalter. I thought that I knew enough relevant keywords (JSON? parse?) to Google my way through some basic JavaScript, although it took the help of actual software developers to get it worked out (thanks Matt and Alex). With a little prodding, I was able to put something together, and I now bring you Rimas Adrift:

Rimas has since “found” a genoa to replace the one that had been ripped, and once he was no longer limited to a storm jib, he made reasonable time toward Kiribati—which he promptly bypassed, heading southwest (an area for which he has no charts).

We’ll all have to just wait and see where he goes from here. Intellectually, I can understand why some people may be inspired by what Rimas is doing. He is certainly seizing the day with genuinely reckless abandon. If you hang around boats long enough, you’ll see plenty examples of the other extreme: I know several would-be cruisers who are locked into a cycle of perpetual preparation, obsessing over the most seaworthy alloy for the flush handle on the head or the best choice of backup sextant, to the point where they never actually leave the dock. I trust, however, that there is a middle path between the “maybe next year” cruiser and the fool who believes his own platitudes and naïvely endangers both himself and his eventual rescuers by sailing off in a $500 boat that was never meant to leave protected waters beyond the scope of a 72 hour weather forecast.

Ultimately, I can’t support what Rimas is doing. Living off of donations and the good will of others while giving very little back (except for perhaps a bit of public spectacle) doesn’t fit in with my ideal of self-sufficiency, and I have too much respect for knowledge and experience and finely crafted things to seriously get into his brand of stunt cruising. I will admit to a certain morbid curiosity, though, and I will certainly continue to enjoy the tangled poetry for as long as Rimas can keep his DeLorme charged.