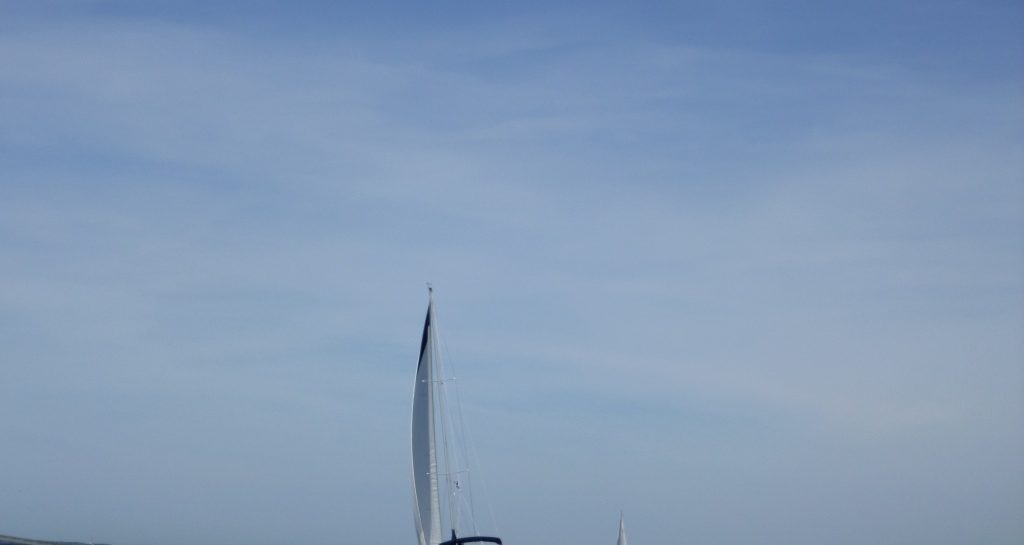 We’ve had a flurry of exciting sails, with our delivery followed closely by a cruise to Beach Haven. This weekend, however, we returned to our usual sailing operations of sailing to nowhere with no time table or particular goal, and it was good.

On Saturday, I went down to the shore to race with Tall Oaks on Providence II. It was blowing 25kts out of the northeast and we were tickling 7kts on just the jib on the way to the course, but with the long fetch with wind from that direction the bay was choppy and the race committee called it off. We’ve raced in 30kts, gusting to 45, so we certainly could have made it, although we were a little shorthanded for that kind of wind. The RC said that they had some green sailors racing, and thought it best to just wait for a calmer day. We were disappointed, but as we came around to head for home, Val noticed that some of the stitching was coming loose from the foot of his jib, so maybe it was for the best. When we tried to furl it in, we found that the spinnaker halyard had somehow gotten wrapped around the forestay, so I had to take the helm while Val went forward to fix it. As we pounded into the waves, spray was making it all the way back to the cockpit, which I guess requires some serious chop on a 36 footer.

I feel like I’ve seem my share of breakage on racing boats lately. Last week on Revolution, we were barely away from the dock when the wind jumped from 5 to 35kts on the leading edge of a powerful thunderstorm. We already had the main set and were immediately knocked down. The hank-on genoa partially inflated on deck and we lost most ability to steer with that much sideways force at the bow. In the process we were blown into the island, somehow got off of the island, and then crash jibed so hard that a spreader broke off and the boom kicker came out of its track, leaving the boom to flail about the cockpit. I clambered up to the deck to get the sails lashed while Sailor Steve struggled to keep Revolution in deep water, trying to wrangle the boom. It was pretty unnerving in the moment, but if you sail long enough, these things are bound to happen. No matter how much I race on other people’s boats, it never ceases to be an education.

Sunday was an entirely different matter. The wind was a calm 10kts or so, and Jen and I headed down to our new boat to do our usual sort of leisurely pleasure cruise.

Some of the more mundane things were the biggest eye openers for us. For example, we didn’t have a truckload of stuff. We can leave the vast majority of our sailing accoutrement on the boat (and I’m not even sure that we’ve really reached peak efficiency yet) so we were relatively unencumbered. Also, we didn’t have to wait for the ramp, launch the boat, or park a trailer across the street. Jen didn’t have to endure a mansplanation of how to handle our boat once we got it launched. Our new boat is already in the water, where boats belong.

The bay was as busy as it’s been all year, but most of the traffic was sailboats, doing the same promenade up and down the bay that we were. Even so, that’s no reason not to try…

We’re still learning what our boat will do, and our first challenge was to get up on the transom of a big Beneteau that was about a mile ahead of us as we turned the corner out of Cedar Creek. 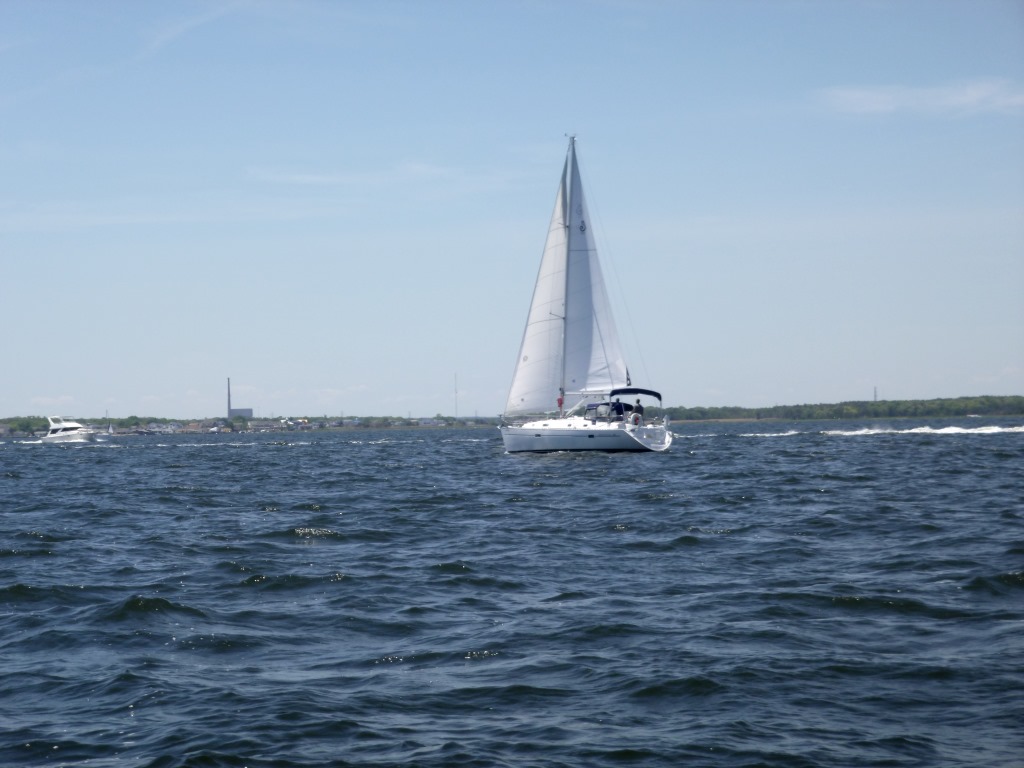 We narrowed the gap considerably and just about got even with him when he furled up his jib and headed in to Forked River.

We continued on down the bay, sailing all the way to 42 before turning around. We’re still not used to how much faster this boat is, and were a little surprised to find out how quickly we got down there. We heaved to in the open waters in front of Waretown, just to see how the boat would handle it. Because the wind was due east and the bay is angled a bit we were actually on a slightly broad reach heading southbound, and the jib may have hove to better if it was trimmed in a little more, but it still worked, which is good to know. We saw Sailitude and Perfect Fit zoom by in the other direction while we were playing, and briefly considered chasing after them, but we didn’t (which was for the best, since our racing chair was at the helm of Sailitude and they would have spanked us on every point of sail).

We instead started our return up the bay, drawing a bead on a Nauticat 38 ketch and then a big Catalina. Neither were very sporting—a Nauticat is clearly a long-haul cruiser and the Catalina turned out to not even be flying a main—but it was something to aim at, and a cheetah is never looking for the healthiest, fastest gazelle anyway. 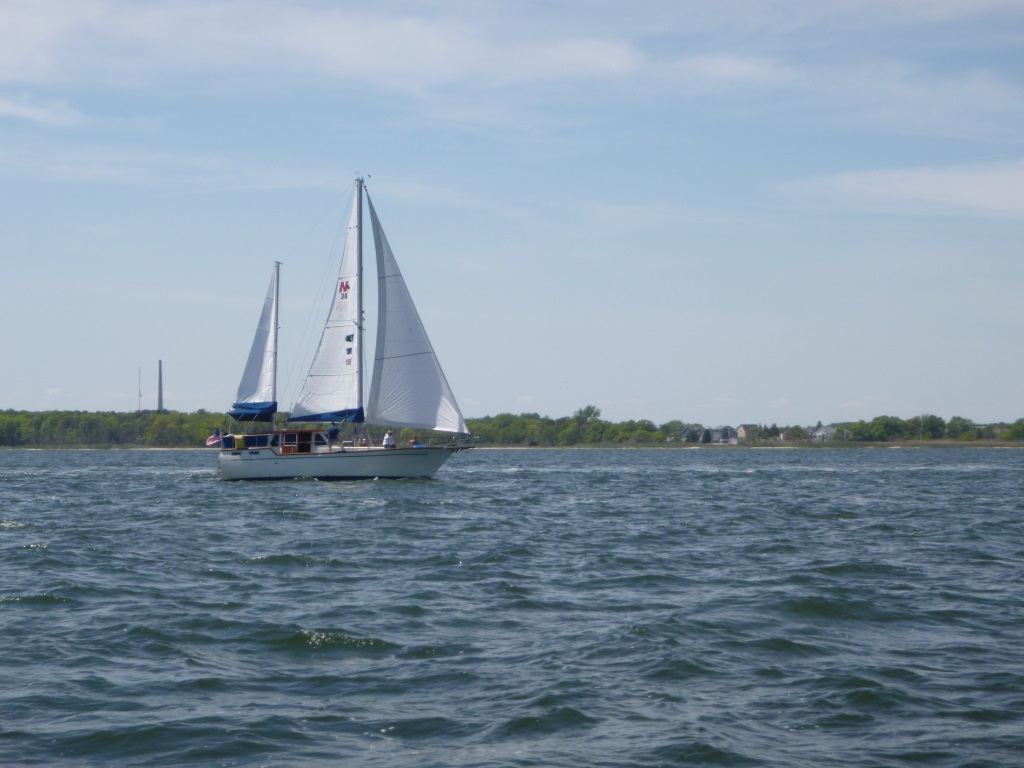 Jen took long turns on the tiller in both directions and has never seemed to enjoy (tolerate?) steering so much. I think the helm will remain largely my job, but I’m glad that Jen is settling in and becoming comfortable. The 27 is more stable, tracks better, and has a lighter helm than our 22, so I think Jen feels much more in command. Even close hauled with some heel on, I was able to give Jen the stick and take some pictures. 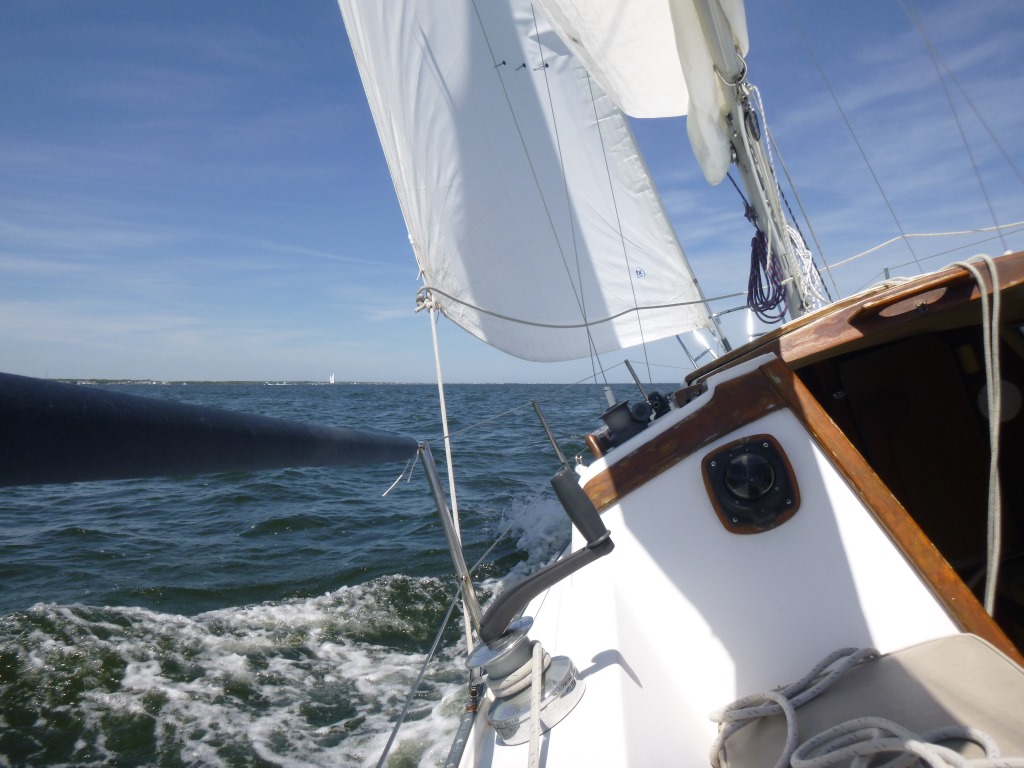 We sailed past Cedar Creek and continued on to 39. We were a bit outside the channel and the water starting getting thin (having a depth sounder still feels a little like ESP to me) so we jibed and headed back toward the creek. 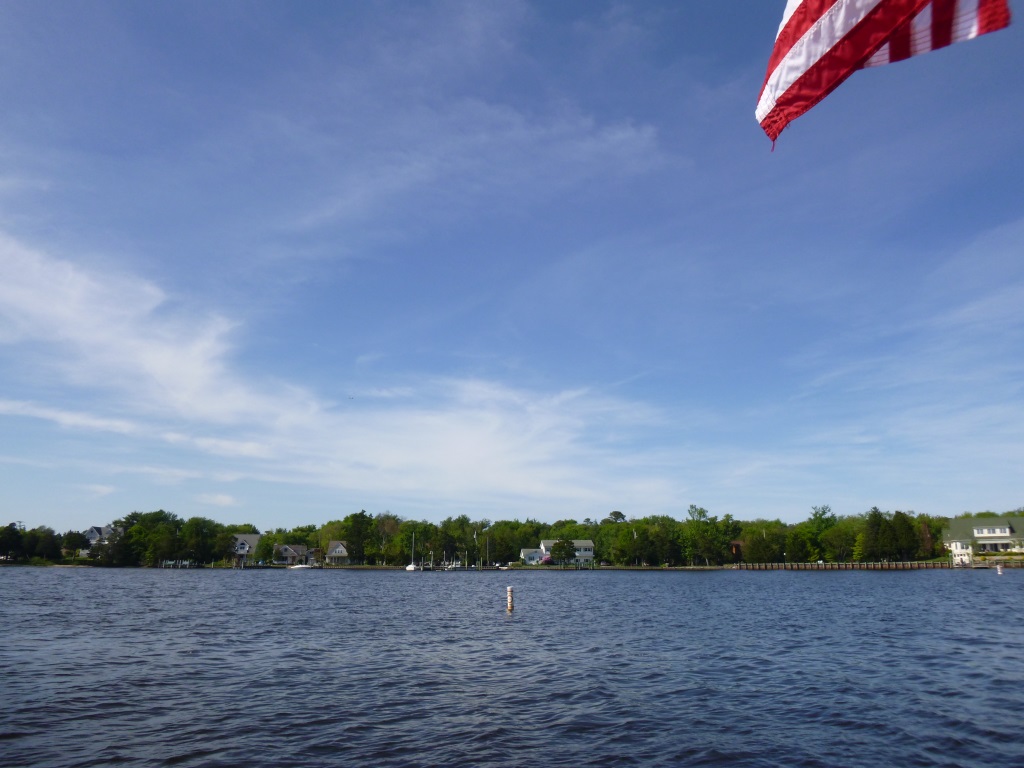 Motoring in, I was conscious of the fact that I haven’t fully acclimated to having a slip at Cedar Creek Sailing Center. We took our sailing classes there and have spent a lot of time at the marina since it’s the home of our sailing club, so it’s not new to us, and whenever I imagined us owning a big boy boat, it was always there. Now that we’re there though, it seems odd to bypass Trixie’s. I guess it’s like moving to a new house down the street from your old house: driving home is completely familiar, yet slightly off. 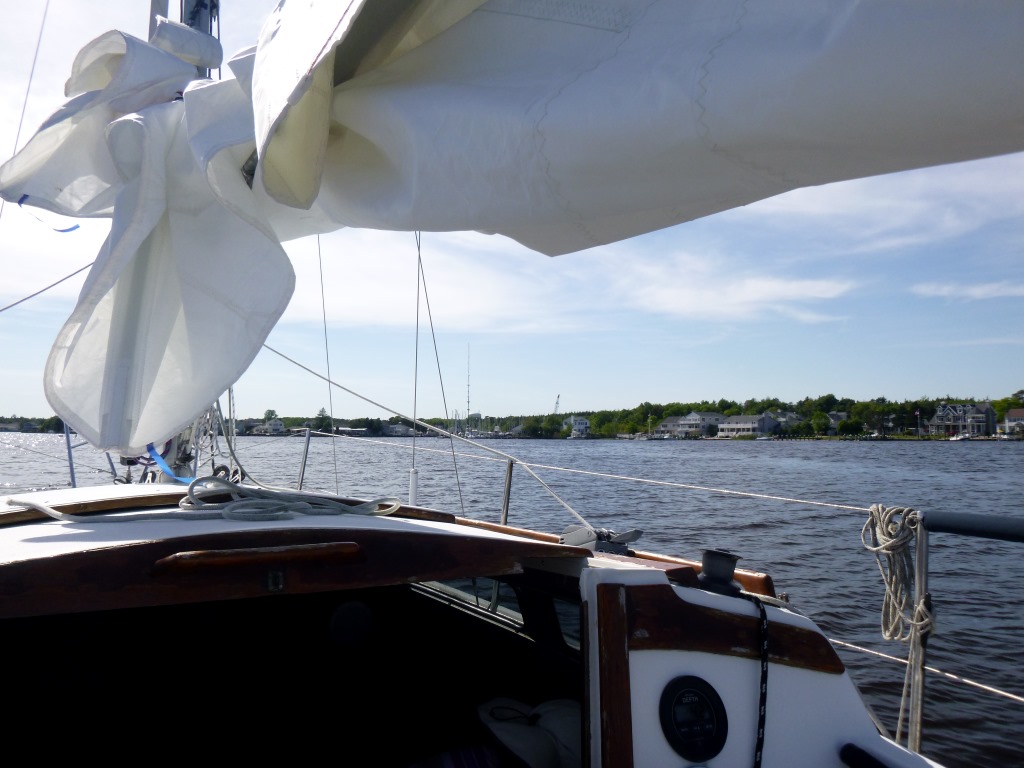