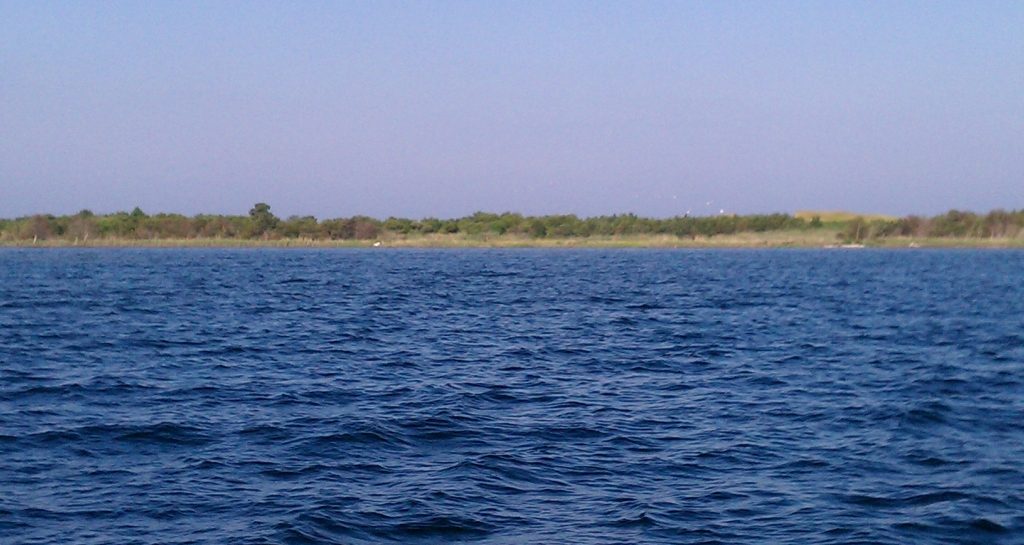 It wasn’t much of a sailing day but it was an excellent boating day, and sometimes that’s exactly what’s needed.

Governor’s Mansion is an area of the bay that’s literally next to the official beach house of the governor of New Jersey, which is really a regular-sized house in Island Beach State Park. We’ve heard a lot of great things about the area, but never attempted to go there because the eastern side of the bay is generally shallow, and without a whole lot of navigational tools at our disposal, sailing there was a little daunting. The US and State of NJ flags were flying, which I’ve heard from completely unreliable sources only happens when the gov is occupying the residence. Jen remained ladylike however, and resisted the urge to salute him. Lord knows that if any of her digits had been injured in the process, we wouldn’t have been able to afford the copay.

The mansion is so close to our marina we felt a little silly sailing straight there, after having gone through all the trouble of rigging the boat (and awesomely sailing off the dock, again). The wind was from the south so we headed that way, lazily tacking our way down. Given that in light wind we point like a Spanish galleon, we weren’t really getting anywhere and gave up somewhere in front of Cedar Creek. We turned downwind while in the shallow eastern half of the bay and headed straight there on a broad reach, thanks to the help of our new toy…

Earlier that day, Jen and I finally got around to buying the Navionics app for her Android telephone. Although we had to swear a blood oath that we wouldn’t use it for navigation (or perhaps just press the “I agree” button) we, uh, used it as “a reference tool to enhance our understanding of our position in relation to the electronic charts.” It’s a pretty cool app which utilizes the GPS capabilities of the phone to plot a position on charts saved locally (therefore not requiring a wireless data connection to download map tiles). The saltier sailors strongly caution against relying on electronics for navigation, and using a mobile device as a primary source of plotting a position is a particularly bad idea, but creeping around with our keel down isn’t terribly dangerous for us, as we can always reduce our draft by winding up the keel and move toward deeper water. 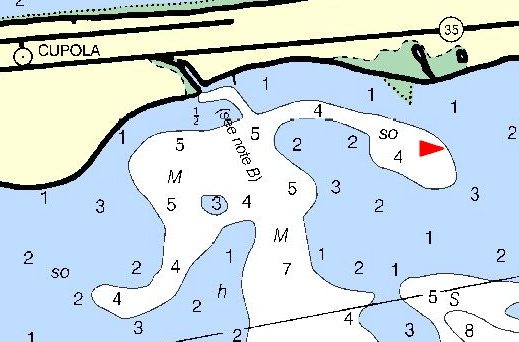 As it turned out, at noon on a sunny day it isn’t really required at Governor’s Mansion. The water is incredibly clear (for the bay), and the shallow bits can easily be seen. We made our way in as far as we could go, just to check it out, and anchored near the southernmost part of the deep water as charted. What was marked at 4′ on the chart was more like 6′, which I confirmed only by jumping out of the boat. Jen kind of swam too, and we hung out for the rest of the afternoon.

There were very few boats in the anchorage, but there was plenty going on to keep us entertained. A WWII fighter plane was doing loops over Island Beach, which was a lot of fun until it did one directly over our boat. The pilot lingered in the “I’m dive bombing you” position a little too long for my taste before pulling up and flying away. We were also visited by a fish, lending to the quasi-tropical vibe among otherwise very Jersey dunes. Jen was looking over the stern and declared that she had seen a Yellow Perch. I wasn’t sure what she was talking about since that’s a freshwater fish, but sure enough he looked an awful lot like a Yellow Perch—predominantly silver instead of green, but with the same sort of vertical stripes. Upon consulting the internets, I think he may have been a Banded Rudderfish, eponymously swimming around our rudder.

We stayed as long as was practical—perhaps a bit longer—but the sun was setting and we didn’t want to get the truck locked into Berkeley Island Park. We had to get home to tend to land-based obligations on Sunday, or we might have just stayed there overnight. Having sailed off of the dock, I wanted to also sail off the anchor, so we raised the main and I went forward to make like a windlass. This plan worked pretty well, and Jen was able to sail us away by herself on just the main.

While we had been relaxing, a small fleet of Windjammers had gathered on the other end of Governor’s. We didn’t recognize the first few boats’ names as they organized via VHF, or we might have joined them. The trip out would take us right by them, and I was reveling in the opportunity to sail out of the narrow channel using only the wind and a telephone, but, of course, it’s a metaphysical certitude that when Windjammers are watching us sail, there’s about to be a debacle. As we made the turn to head out the wind died and we sputtered to a flogging stop directly next to the other boats. As romantic as it may have been to stand on the bow as Jen sailed us off of our anchorage, I suppose there’s also something to be said for knowing when to fire up the auxiliary and race the sun back to your harbor. 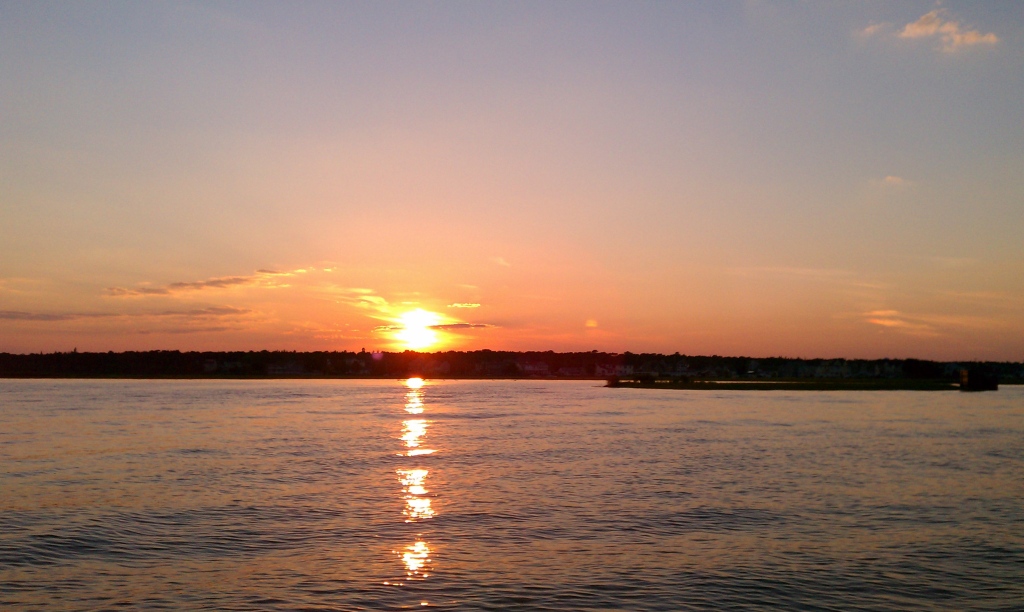