Once again, it was pretty windy. While the predicted wind speed for Trixie’s was 8-12kts, the anemometer there was showing 12-16kt when we arrived, and it got worse once we were out there.

We experimented for the first time with using only the jib. People keep telling us that this is a great idea, including former Catalina 22 owners, and although it doesn’t make a whole lot of sense to me, it seemed worth a try. I wasn’t about to put up even a reefed mainsail and at least we can quickly roll the jib in if things get squirrely. Which they did, immediately. 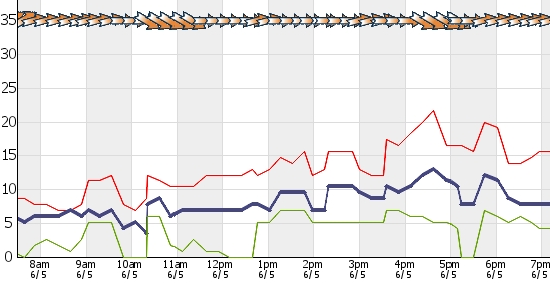 In fairness, it was working pretty well on the way out. We headed toward Tices after clearing Berkeley Island and we were humming along fine on about half of our jib (literally humming…we were at keel cable speed) despite the fact that she felt a little weird to me. Then the gusts came, topping 20kts. and kicking up waves that were breaking over the bow. The boat was maintaining but it wasn’t making for the relaxing trip that we were looking for, so we struck the sails and motored back to Berkeley which we thought might be a little sheltered from the wind.

It was still quite windy in the cove, but after a couple tries the anchor held and we were able to enjoy a brilliant few hours lazily hanging out on deck, having some snacks and beverages, and, for the first time, swimming from our boat, which looks amazingly huge and stately from the surface of the water. We regretted not bringing enough stuff to stay overnight on the boat, but stayed out as long as we could, past sundown.