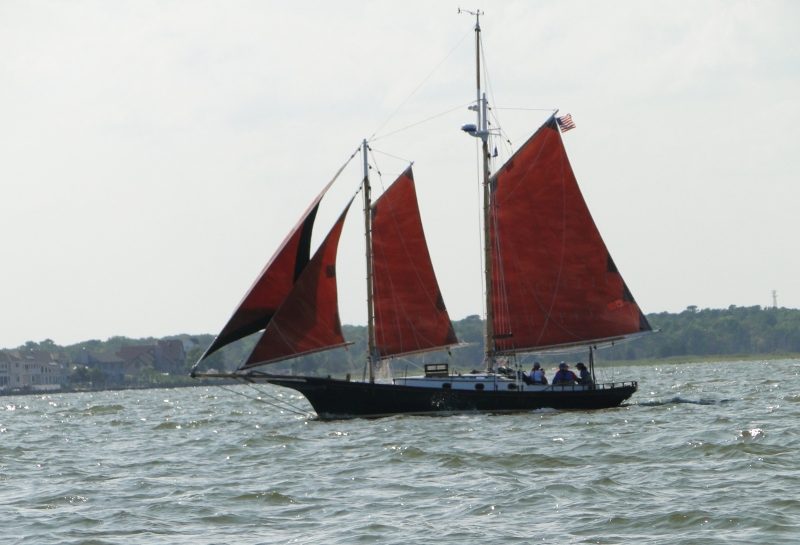 This is the entry for both July 31 and August 1, because we finally stayed overnight at anchor.

As we so often do, we got a bit of a late start on Saturday, which was exacerbated by having to think through what we’d need to stay overnight. Greg and Laura were going with us for a day sail and beat us to the marina by a large margin.

It was pretty much perfect weather and the ramp was unusually busy with unusual boaters, so after we finally were able to launch we decided to move over to the gas dock to rig the sails. There, I noticed that the fuel line to the motor was broken in half. After wandering around for a half hour looking for the guy who runs the engine shop, I realized that I had a fully functional, brand-new spare in the boat. I think that’s -1 point for forgetting but I’m taking +2 for having a spare on board at all.

It was kind of gusty when we left, so we took it easy and sailed on the jib alone all the way down to BB, making excellent time for being under canvassed. Sailing with just the jib is ok, but I’m often reminded of my college writing professor’s lecture on Chekhov’s Gun and having that prepped main sail there still under the bungees was killing me. Since we had to tack to head back anyway, I took the opportunity to raise the main. I think this would have been a situation where it would have been to our advantage to have a real topping lift, allowing us to let the boom swing freely so that we could easily raise the main without having to point the entire boat into the wind. As it was, I couldn’t think of any way of doing it other than to start the engine and power into the wind, which, while possibly unsailorly, certainly did the trick.

Sailing just slightly broad of a beam reach with both sails up, we had a fun ride back. Fortuitous was well behaved and handled the numerous boat wakes pretty well. There were a lot of boats out, and Laura got several good pictures of a gaff-rigged schooner (which is a rare sight on Barnegat Bay). As we approached Berkeley Island Park, we executed a near-perfect jibe and sailed into the cove.

We anchored and commenced the non-sailing portion of the trip. It turns out that regular Mount Gay Eclipse is to a rum and Coke what Mount Gay Eclipse Silver is to a Daiquiri. That is to say: awesome. We also poured one out for our homie Koko and spun some really smooth music. Eventually the rum ran out and the boat guitar made an appearance, which usually implies that it’s time to head for land. 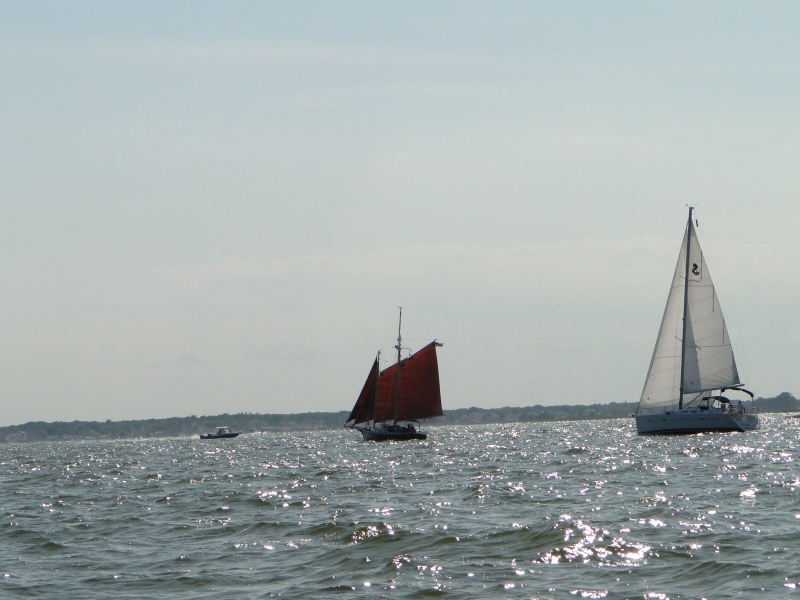 In this instance we were only heading back to drop Laura and Greg off at their car since we were intending to stay on the boat. Jen also had to make a quick trip to get a frying pan so that we could make our dinner—we had forgotten cooking utensils/overestimated the thermal properties of aluminum pie tins. I was supposed to tidy the boat while she was gone, but wound up taking to the Laser sailors and generally milling about.

Eventually, we cast off and motored back to the cove. The sun was setting behind us, and for the first time we got to use our navigation and steaming lights. We cruised past Providence, which we’d seen sail in earlier, and said hello to Val and Martina. Fortunately they recognized us and realized that we weren’t simply trying to ram them or anchor six feet away. We found a spot that was, in retrospect, way too close to the public docks, but provided ample swinging room for us to anchor. After a curious couple attempts, we backed down hard and set the anchor as best as we could, kicking off our vigil to see if we’d drag.

Things went really well though. Jen made grilled cheese sandwiches and we relaxed for a bit before turning in. We were fairly conservative with electricity, but our new LED anchor light made it through the night and, although I didn’t bring my meter to get any kind of accurate numbers, we still had power in the morning. I did wake up once around 3:00 when the boat didn’t feel like it was riding right…it turned out that we had swung 180° even though there was no discernible wind, but our anchor held (or reset).

We awoke to intermittent drizzle and decided not to sail Sunday, but were pretty happy with our first night on the hook.