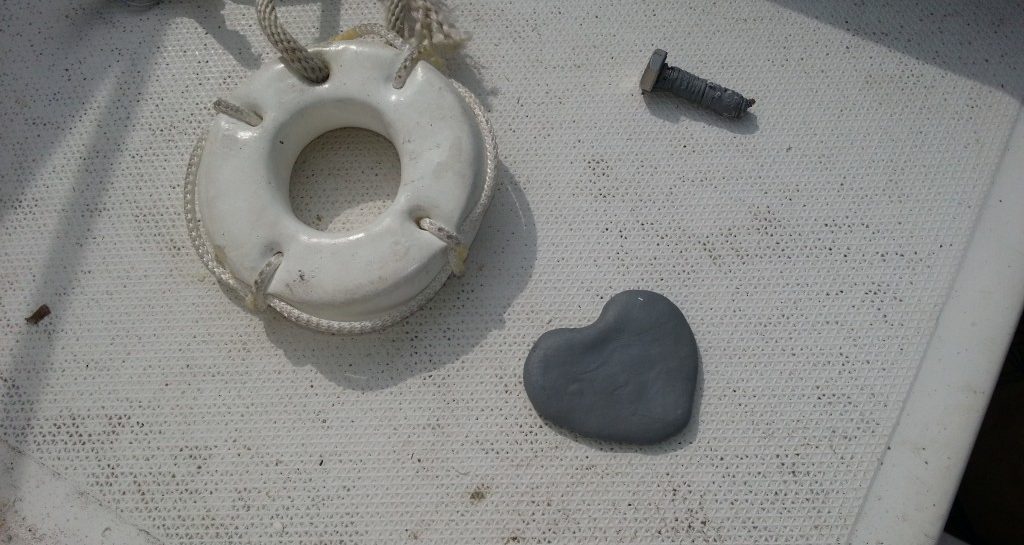 It seemed so easy. There were only two things that we had to do and we had two days to do them. I was harboring a secret wish to finish them all on the first day and then sail, to the point where we actually brought all of the sailing necessities, but man, I can’t get this maintenance monkey off my back.

We got down to the shore late, which is kind of the cornerstone of our relationship with the shore. I specifically got up early to get to the store and pick up a few last minute things, but that turned into a two hour [Jen: it was more like two and a half] expedition involving multiple stores and the depletion of my remaining West Marine credit.

The only two things that we needed to do were to replace the stanchions and put in a depth sounder.

Ok, so there were multiple steps to each of these.

First of all, it’s important to injure yourself early: I removed a 2 inch patch of skin from my forearm while getting into the boat, because it was unlikely that I’d be leaning on that all day as I crawled around the interior of a boat that doesn’t have standing headroom for most second graders.

Before we could put the new stanchions on, we had to get the old bases off. The old posts broke off at the welds (which I suppose is preferable to having them pull through the deck), leaving the bases intact. For each stanchion, there were two nuts that I could turn from the inside and two that Jen had to turn from the outside because the nuts on the outboard side are so close to the hull that you can’t fit a socket around them. I mentioned this briefly (and included a crude diagram) in the last log entry. That was actually based on having only looked at one of the stanchions from the inside…not realizing that every one is completely unique. Some of them were even worse, with half of the nut tucked somehow up under the hull: 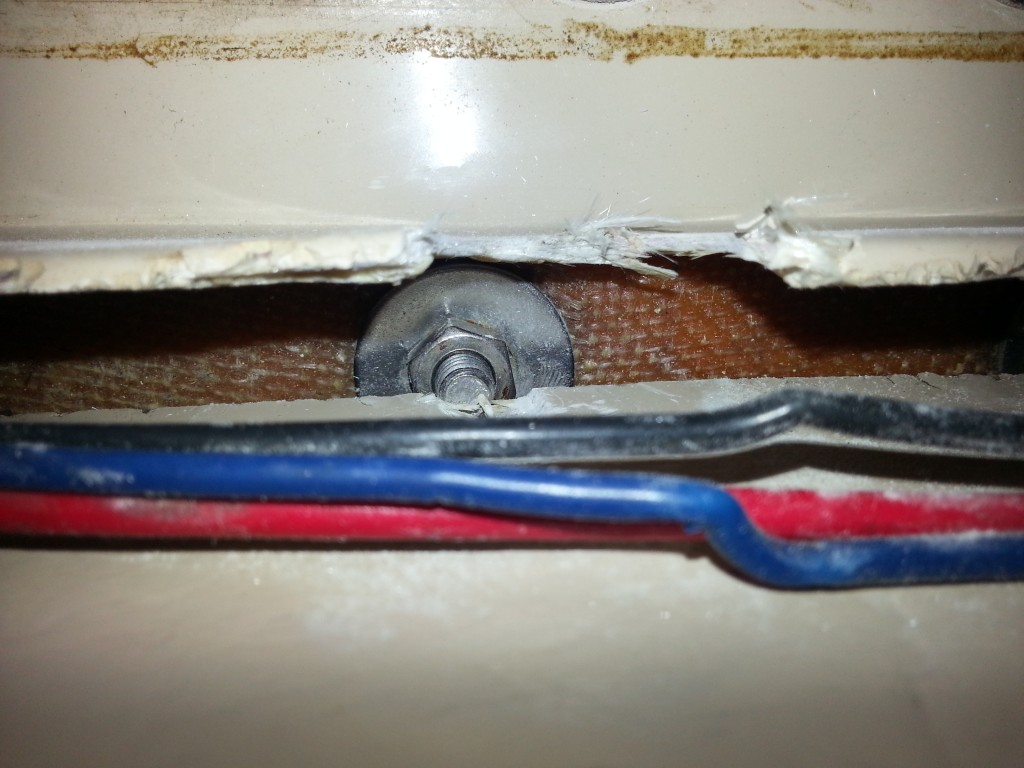 For those, the only thing I could do was put an open-ended wrench on them and have Jen unscrew them from the deck, because there was no room to do anything with them from below. Getting them out, however, was still easier than putting the new ones in.

I’ve been a little gun shy about posting on the sailing forums. I only ever really posted on one and it got a little slow and predictable and between that and possibly my own hubris, I went about these projects without consulting anyone who knows anything about boats, for better or worse. My take was that we shouldn’t mess around with something like lifelines (I mean, they’re literally called lifelines) and stanchions, so I bought brand new ones. It’s possible that I could have fixed my old ones or found used ones on some donor boat somewhere or just gotten rid of them completely, but I felt like I was doing the conscientious thing. I now wonder if this is this same kind of faulty logic that makes people take their cars to the dealership for non-warranty work.

The new stanchions didn’t quite fit. The holes were slightly off, which made them slightly (100%, give or take) incompatible out of the box. Bring on the torrent of profanity. The next steps were:

On the depth finder front, I did get the display mounted. After the absolute fiasco of expanding the hole for the compass with a drill-mounted grinding stone, I was all proud of myself for having the right size hole saw—until I realized that the back needed a slightly larger hole. You can’t increase the size of a hole by using a hole saw because there’s nothing for the central bit to bite into, so I was back to the grinder. Tensions were high.

Against all logic, Jen went back to the shore with me on Sunday for a double-dose of excitement. The epoxy cured well, and my fair lady helped me scrape and sand the areas flat so that we’d have a nicely faired area to re-bed the stanchions. I went about re-drilling appropriately-spaced holes and countersinking them while Jen washed the deck to maximize our chances of success with the butyl tape. 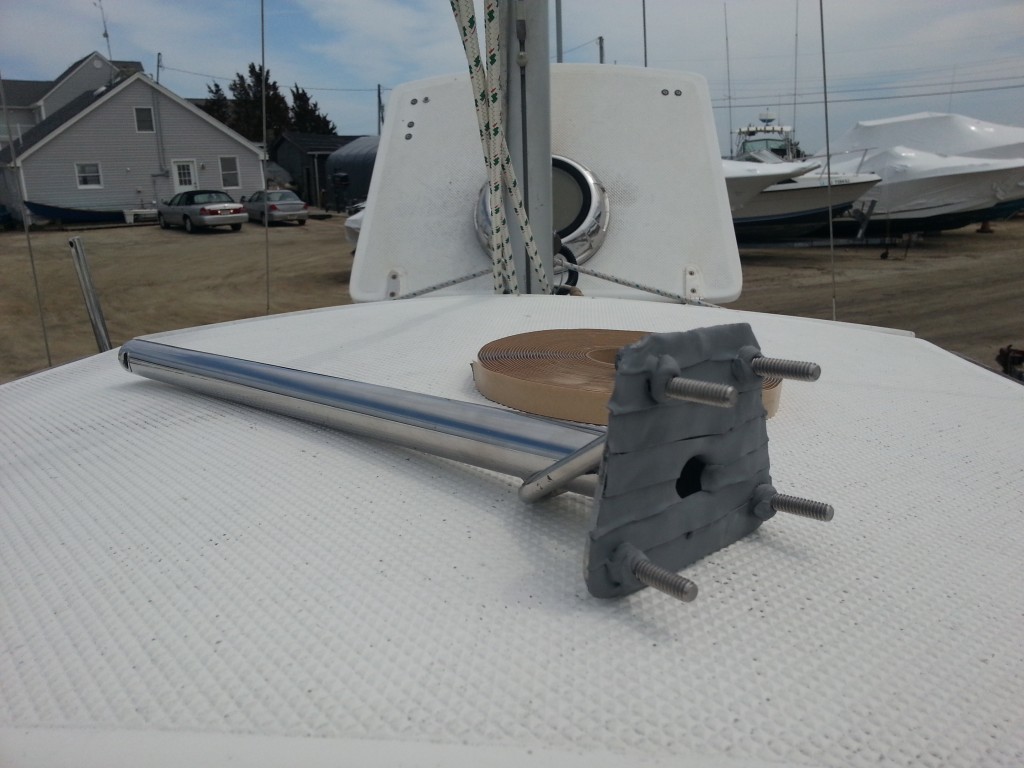 Just as with the base removal process, I was inside and Jen was outside. She’s not quite tall enough to comfortably reach the toerail while standing on the ground, but our decks aren’t wide enough to give her room to sit on the deck, so she had to just uncomfortably work from the ground or standing on the trailer. It was a huge pain for both of us, with me working blindly, contorted, laying on my back and pushing nuts into tiny cracks of jagged fiberglass hoping to get them threaded as Jen turned them. She isn’t exactly used to operating a ratchet, but was doing just that, over her head for hours. She cleaned the excess butyl as it oozed out, and made me this butyl heart: 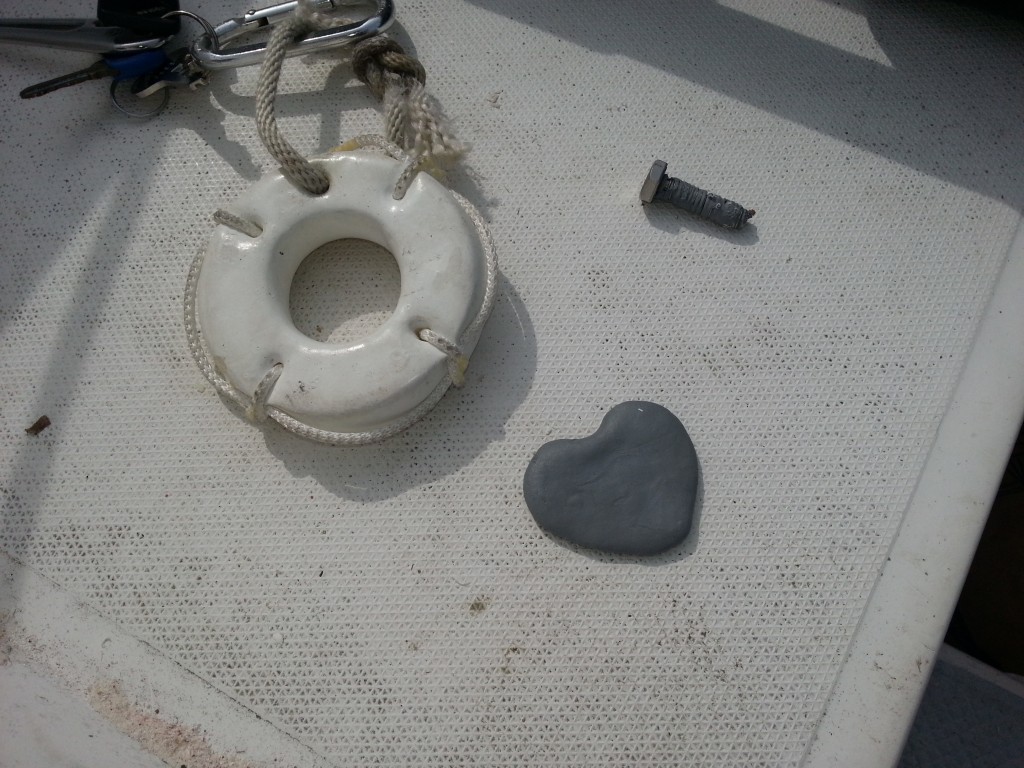 Pay no attention to how ridiculously filthy the cockpit is, or to the bolt that I somehow sheared off cleanly with the little baby 1/4″ drive ratchet (I gave Jen the 3/8 to give her maximum torque).

Jen literally went to take a nap while I tried to figure out how to add our depthfinder and compass light to our electrical panel. I don’t even want to talk about it, but it technically works, as does our VFH, AM/FM radio, and cabin lights. I’ll hope that the rest of the lights work at least as poorly as they did before I started pulling out wire nuts in a blind rage.

By the time I got done crimping and heat shrinking and throwing together impromptu bus bars made out of leftover stanchion bolts, we figured that it was too late to launch the boat, which we would have had to do to test and mount the depth finder’s sensor. I had been so wrapped up in trying to figure out the electrical system that I forgot that we hadn’t actually put up the lifelines. That was probably due in part to the fact that I have no idea how to swage cable.

In reality, that process was pretty simple, even though I was running out of enthusiasm for spinning bolts. The kit came with a cable snipper and crimping tool that’s just a die that you put around the fitting and tighten with a wrench or socket. I think it actually came out pretty well, and I was glad to finally get something finished in this seemingly endless maintenance cycle. 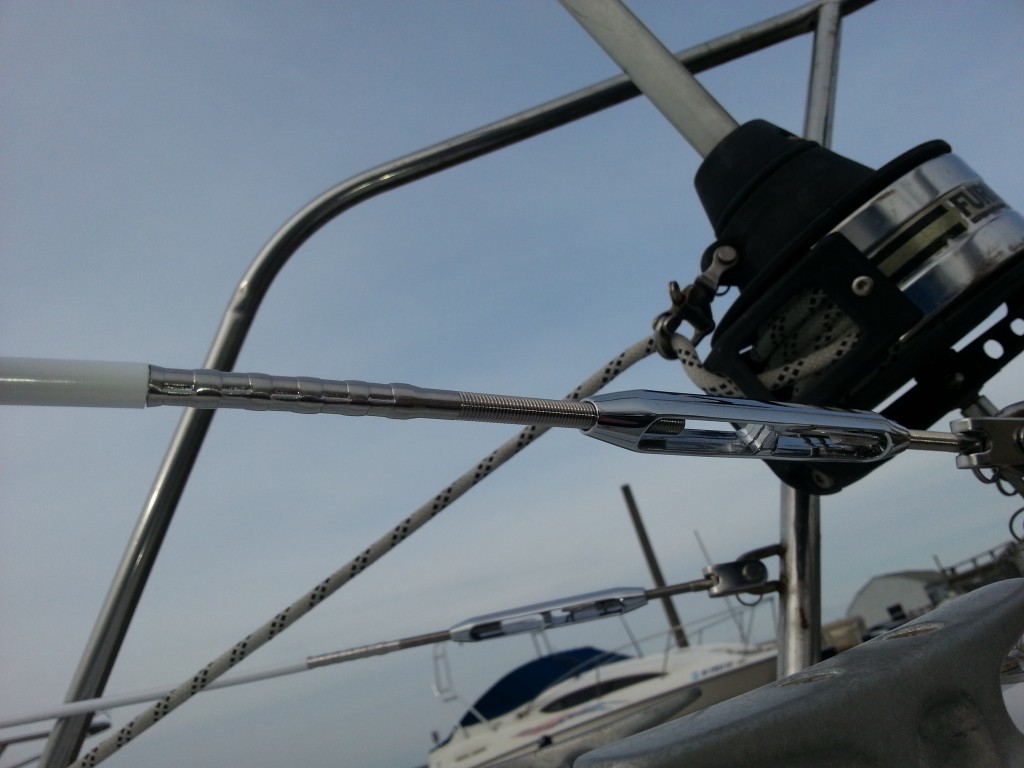 We’re getting there. We wouldn’t be half this far if Jen hadn’t helped both days, and I’m incredibly thankful that she’s not the kind of sailing wife who just wants to use the boat as a mobile sun deck, or worse: resents the boat. While her love for the boat might be a tad healthier than mine, it’s definitely something we share.

I’m bringing the sails next week, and hopefully I can stop whining about maintenance and resume tales of sailing adventure on the low seas. 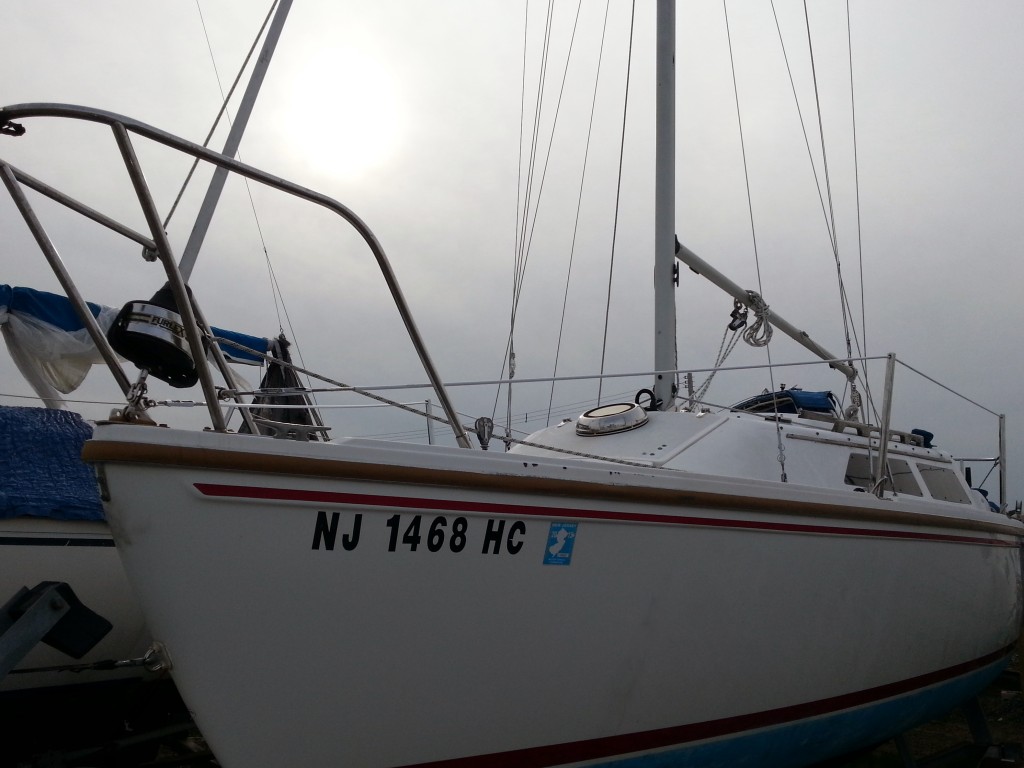 8 thoughts on “My Butyl Heart”