After a dismal winter, various boat damage and repairs, and much general consternation, we have sailed in 2010.

Our mast was damaged in November and we had been working in earnest since March to fix it. There had been some shipping delays with our new mast and problems with the rigging from Catalina, but the marina that was doing the work (not where we keep our boat, since they cater more to engines and power boaters) was extremely helpful and reassuring. The rigging problems resulted in having the work done by a local rigger, with better wire and connections, and the boat was set up by professionals instead of by a complete novice (me) with suggestions from random people walking through the parking lot. During her longer-than-expected stay at Cedar Creek the marina offered us a fair price on a lightly used furling unit and headsail, so Fortuitous continued to live up to her name. 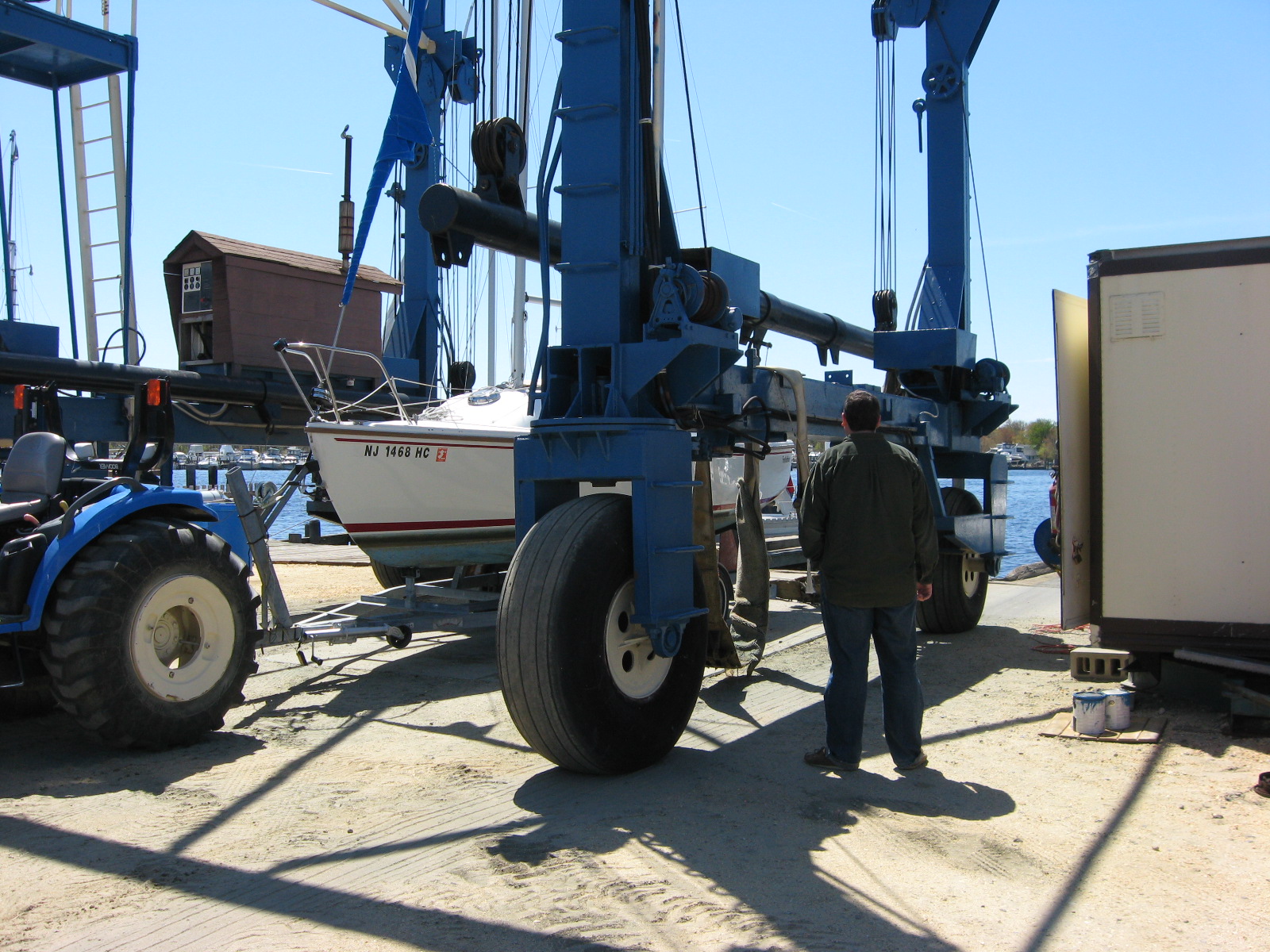 So on Saturday, it was time. The boat was supposed to be in the water by 10:00, but there had been the customary delays and was still on the trailer when we arrived. The upside was that we got to see it launched. Being a more serious sailboat marina, Cedar Creek doesn’t have a ramp, so we were able to see the travel lift operating at close range, which was absolutely fascinating. It’s a crazy contraption.

The marina deftly moved our boat around the yard with a tractor rigged with a lifting trailer ball and positioned it in front of the lift. The lift drove over the whole thing, swallowing the boat and tractor with ease. They put some stout looking straps under it, there were various engine noises and a great whirring of chains pulleys, and the boat lifted off the trailer. More machinery and a different series of engines and things moved the whole gantry out onto a couple spindly docks with the boat suspended over the water. 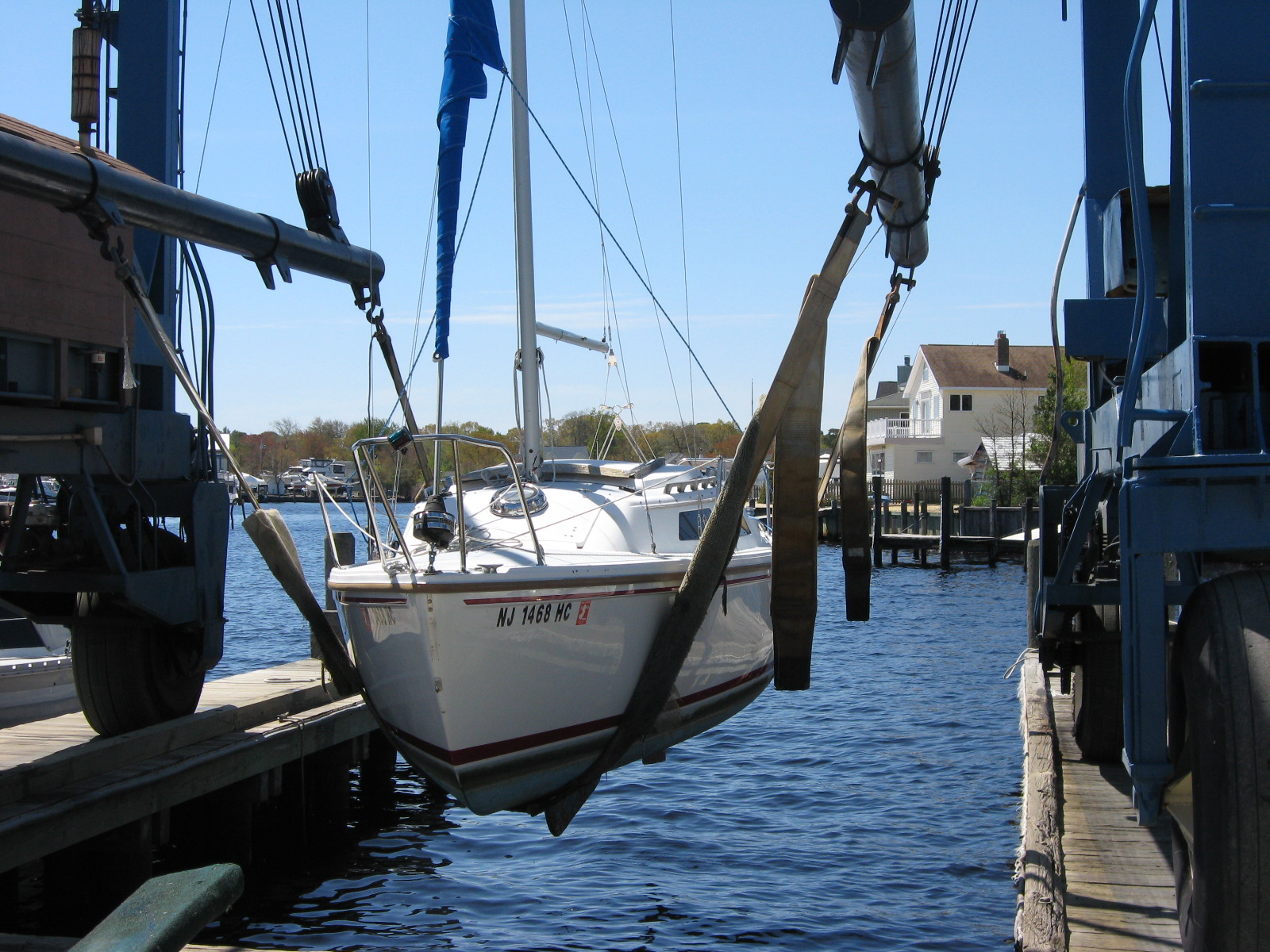 While we had been wandering around the marina waiting for our turn to launch I noticed that, as if the travel lift wasn’t crazy enough on its own, it also had a crane attached to the top of one of its legs. It was as if a kid had made something pretty cool out of Legos but then took it one step too far by attaching an unwieldy special piece as a precarious afterthought that couldn’t possibly work in real life. (Check it out, my otherwise realistic looking Vespa also has a 155mm howitzer!) In this case, however, it did work in real life, no matter how tenuously attached, and actually came into play. When testing our furler, the folks from the marina noticed that the halyard was wrapping above the head of the sail, so they needed to send someone up the mast to add a retainer, and rather than trust the halyards and mast and light keel of my boat, they used the crane to get themselves up there. 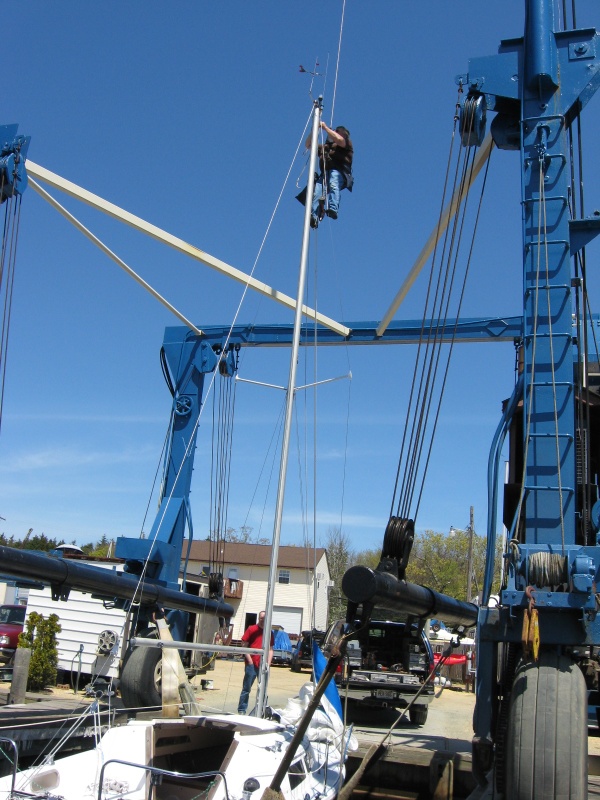 Once all the work was done, we were able to get on board and get set up. We somehow lost some hardware to attach our boom vang and mainsheet fiddle blocks, but between them we had enough to rig the main, and that was enough to sail.

The motor started on the first pull.

The wind was blowing straight into the creek, so we had to motor out farther than I would have liked into the bay before unfurling the sails, although probably not far enough. Once we got them up and turned south, we pretty much immediately ran aground—I’m blaming the winter storms and migrating sand bars and not my navigation skills. The beauty of a swing keel of course is that a few cranks on the keel winch and we were on our way. After a few tense moments, we settled in to some sailing and wandered about in the area around Berkeley Island.

Although the sailing to waiting ratio wasn’t ideal, it was good to finally get off the schneid and get back on the water.