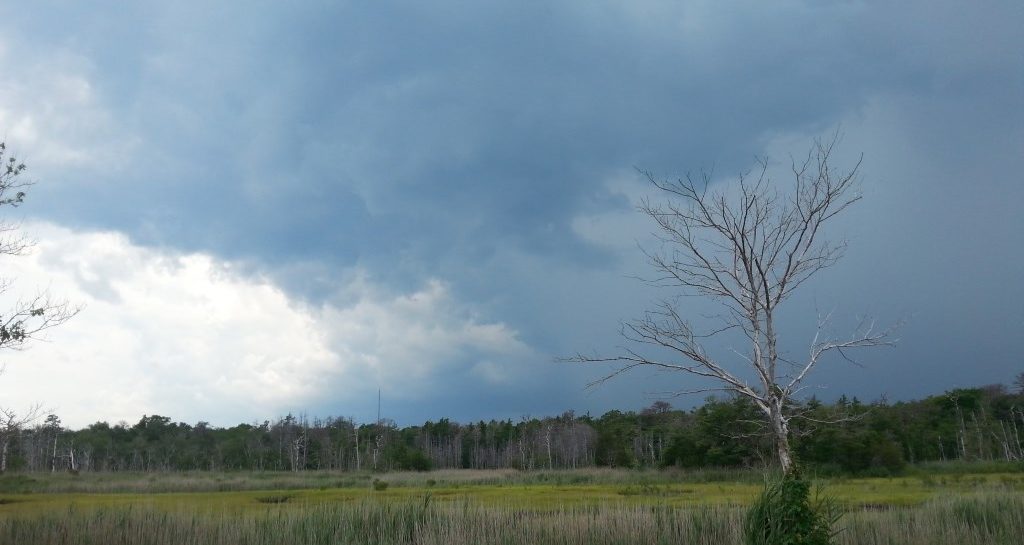 It’s been hot out there.

My weather guru, Gary Szatkowski (who recently retired from his post at NWS Mt. Holly, NJ) has been tweeting temperature maps that seem to have run out of colors. We’ve gone past deep reds into browns and taupe, making the whole thing look like the forecast for Mordor. 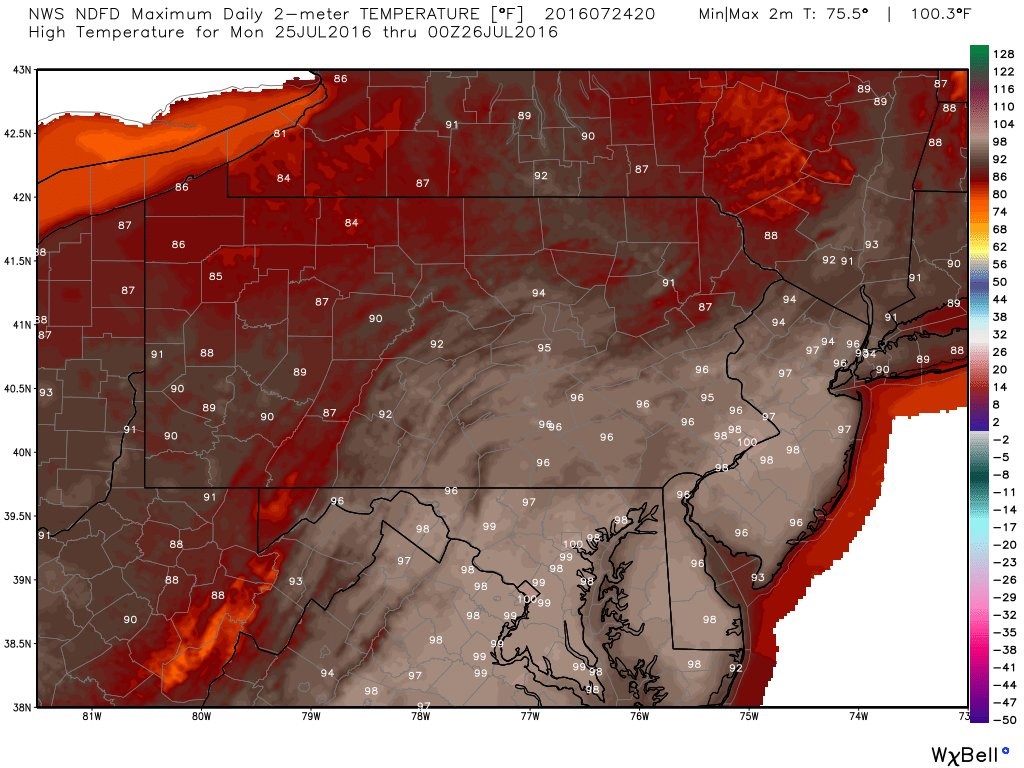 We didn’t sail on Saturday because it was supposed to be nearly 100°F, and we’re lucky that we didn’t try it because powerful thunderstorms tore through the area. Speaking of which, thunderstorms are also what kept us from sailing last weekend.

Last Saturday, we actually had the boat prepped and ready to go. Someone from a couple slips down stopped by and asked if we’d seen the forecast, and I said that there was nothing interesting when we left the house—just the classic “20% chance of thunderstorms” that we get almost every day in the summer. But that prompted me to check the radar on my telephone again, and I immediately jumped off the boat and went to his slip to show him the storms that were popping up just to our west, gesturing to the ominous-looking stacked-up storm clouds that confirmed the radar report. I didn’t want to be the one to salute a cheery “all clear” before sending him out into a tempest. He left anyway, while we elected to batten down the hatches and hope that it would pass through quickly. We drove to Berkeley Island Park (by car) to watch it roll down the creek.

Jen wandered around the park hunting for Pokémen while I stood at the water’s edge. The first tendrils of the storm had reached Retro, a Pearson Ensign from our marina’s sailing school and rental facility. For some reason, they still had their jib out, which was flogging so loudly that I could hear it clearly from shore. I was concerned that they didn’t know what they were doing, so I jumped in the car, drove around the park to collect Jen, and then sped back to the marina to alert someone. 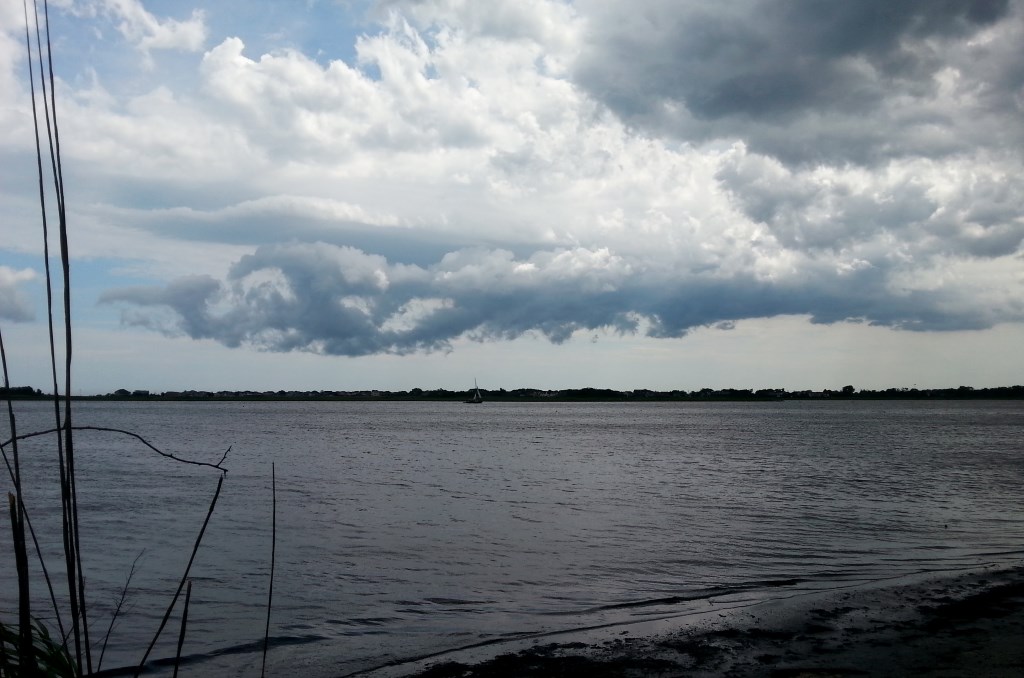 By the time we arrived (only a few minutes later) the storm was fully engaged, with driving rain and constant lightning. The frightened renters powered into the marina at flank speed not long after we got there, still with the jib flapping itself to death. I helped them get to the dock, and then assisted the owner with re-running the jib sheets to allow her to fix the problem. They’d somehow managed to furl the sheets around the sail, about a third of the way up the luff, while still having the sail most of the way unfurled. Who knows…sounds like something we could have easily done in our first couple years of sailing.

More storms followed, and the day was a bust.

But this weekend, we were determined to get out there. Saturday was brown-hot, so we tried for Sunday, which was merely red-hot. It was definitely warm and humid, but the storms held off and the west wind gradually clocked around to the south, bringing a cooler breeze off of the ocean. We were mostly just trying to have some relaxing time out there, and the 10-12kt wind accommodated us nicely, allowing us to ease down the bay under full sail.

We saw one of our favorite powerboats…a tiny little tugboat, twenty-something feet long. I don’t think it’s a working boat…just a bay boat for someone who really likes tugboats. 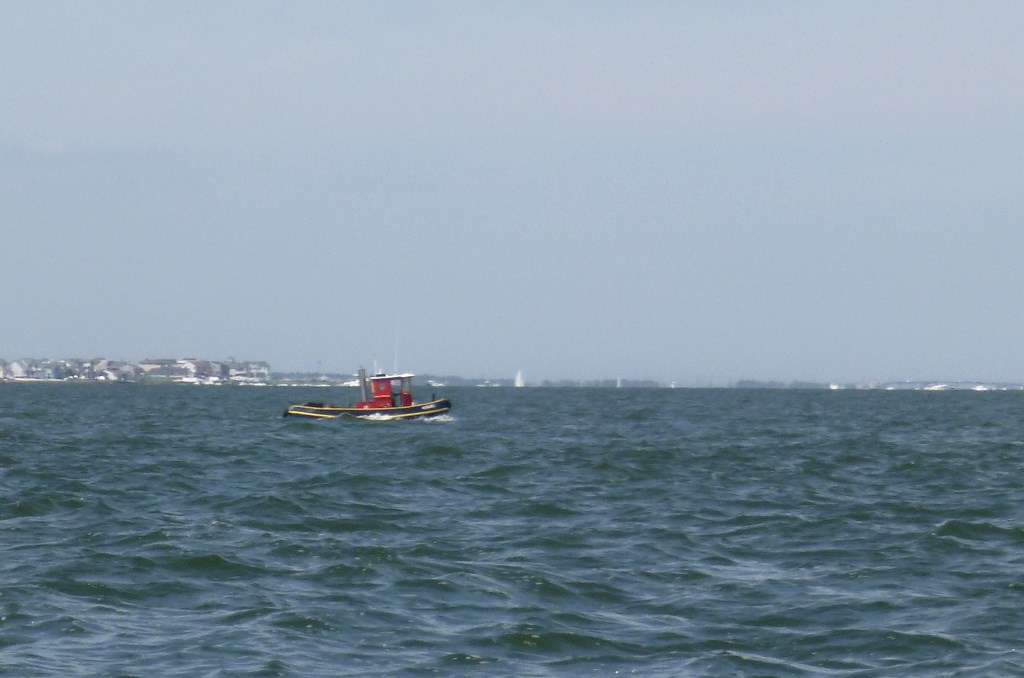 We sailed all the way down to the end of the bay and turned around, sailing on a beam reach most of the way back on green water under wispy clouds. 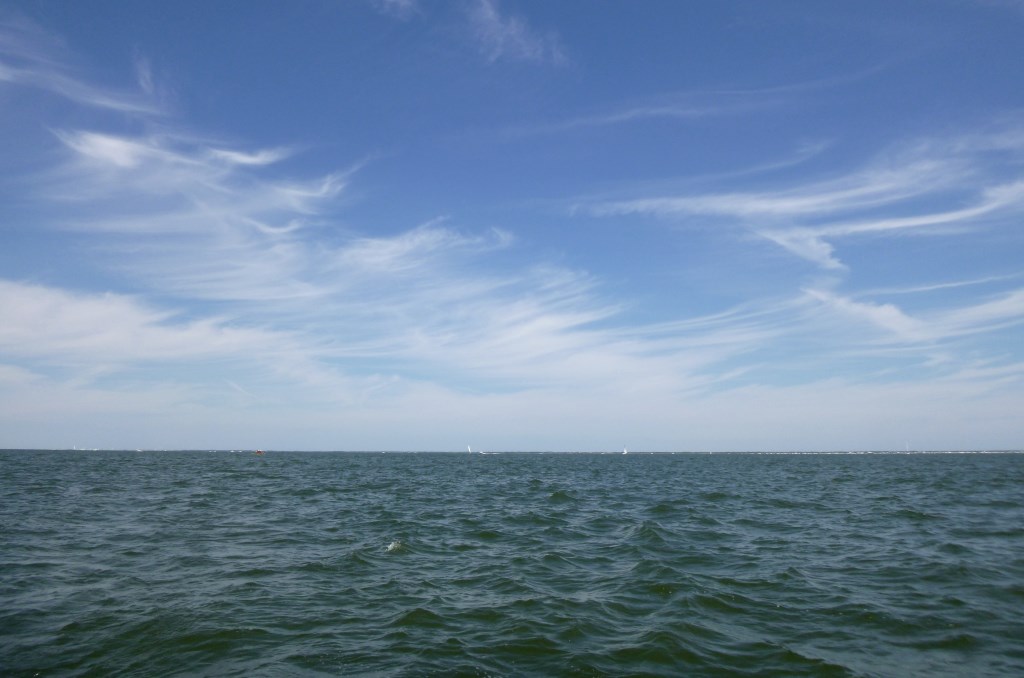 Not exactly high-adventure sailing, but it was good to get out there.