In an effort to stay only 5 years behind the breaking wave of technology, we have added a feature to Sailing Fortuitous that turns our handy RSS feeds into insightful Tweets*. Follow @SailFortuitous, and may your TweetDeck be awash with updates.

What does this mean for you? The staff here have put together a handy FAQ:

A:  It’s that thing that lets people post informative and hi-larious 140-character messages on the internets for other unsuspecting people to read. For the bird noise, see Bird vocalization.

Q:  Are you going to stop your RSS feeds?

A:  No, your Google Reader will continue to flow with news and updates about the sailing activities of S/V Fortuitous.

A:  Probably not. Maybe some day, but for now it’s just updates to the boat log, which is the sole source of content.

A:  What are you, the intro to philosophy instructor at your local community college? Do I have to one-up the cliché factor and quote George Mallory here? I don’t know. The real reason is probably because @mmclar asked for it.

Q:  Jeez, you don’t need to be rude about it. What I meant was, what do you hope to gain from this? You seriously can’t be “marketing.”

A:  According to Pear Analytic’s research, the breakdown of Tweets over some specific two week span broke down like this (this is real): 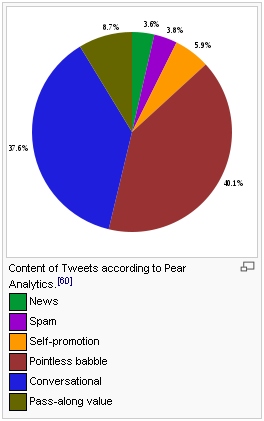 It remains to be seen whether @SailFortuitous will be interpreted as self-promotion, spam, pointless babble, or some other flavor of useless, but all are certainly possibilities. There are like 6 people a day who read the site, and most of them are probably robots, so if a few more people read it, cool. If it just turns out that it’s a little easier for @mmclar to follow it (highly likely), also cool, since at least I got to update the Follow Us page.

Q:  Any plans to expand into other forms of social media?

A:  Man, all I want to do is sail and write about sailing, and most social networking stuff is aggressively disinteresting to me. Facebook is a world with only a like button, and I couldn’t possibly un-like it more. We’d get on there and the next thing you know, our boat will have a Farmville account and then it will just go on and on about how it bought a sheep or some nonsense. Ain’t no boat of mine gonna go on about sheep. Google+ is promising since at least it theoretically has a function for not blowing up worlds, but for now, there are no immediate plans for going social.

Q:  This doesn’t seem very nautical of you. What would Captain Ahab say about Twitter?

A:  Towards thee I roll, thou all-destroying but unconquering fail whale; to the last I grapple with thee; from hell’s heart I stab at thee; for hate’s sake I spit my last breath at thee. Sink all coffins and all hearses to one common pool! and since neither can be mine, let me then tow to pieces, while still chasing thee, though tied to thee, thou damned fail whale! Thus, I give up the spear!

Q:  What did SailingFortuitous have for lunch?

A:  sailingfortuitous.com is a website, and therefore consumes only electricity and time.

Thanks to the beta testers who have already agreed to add this BS to their tweet stream feed following or whatever the hell it is.

* May contain no insight