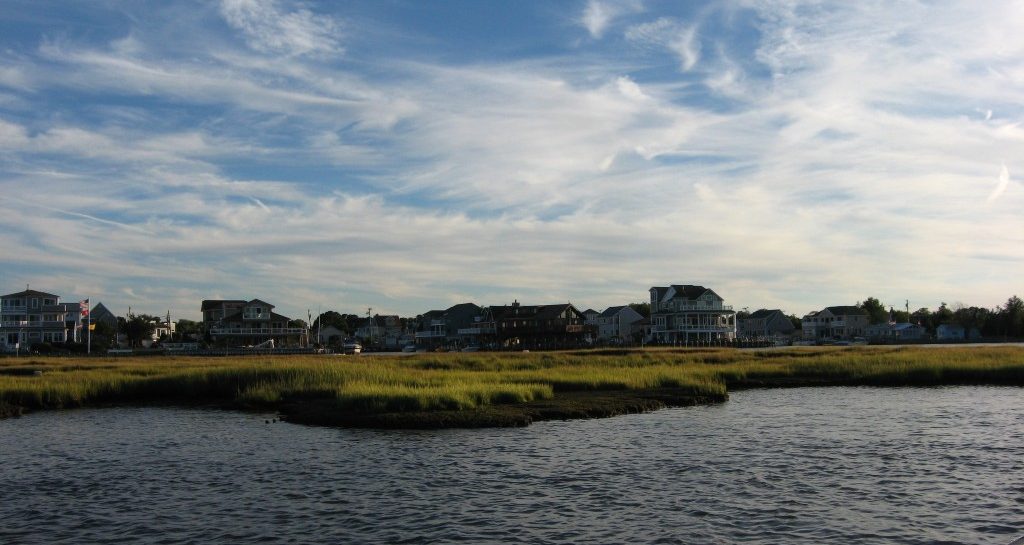 All Jen wanted for her birthday was to spend a weekend on the boat, so we planned a quick overnight.

“Planned” may be overstating it. We considered Cattus Island, but the wind on Saturday was predicted to be brisk, gusting to 20kts from the north. With several narrow channels to navigate, we would have had to motor straight into the teeth of the wind and waves. There’s a lot of fetch with a north wind, and Fortuitous ain’t no trawler. We thought about Myers Hole as a fallback, but the winds weren’t predicted to subside much overnight, and the thought of dealing with both the breeze and shifting currents at anchor was disconcerting.

So, while not very exotic, we decided to explore Forked River. For non-locals, this is pronounced as two syllables: “FORK·kid.” This is only one creek south of us on Barnegat Bay, but we’d never actually sailed it…probably because it’s only one creek south. It’s served by lots of marinas, and we somewhat randomly made a reservation at Silver Cloud, which is almost all the way to the end of navigable water.

We got down to the boat very late, even by our standards. We lost a few hours early: we weren’t sure if we’d wind up in a marina or at anchor when we woke up, and since our anchor light has been on the fritz I made an early morning run to the mega-chandlery and built a removable anchor light that we could hoist on a halyard (more on that in a later log entry). Still, it doesn’t take that long to sail to Forked River, so we had some time to mess around.

The wind was as advertised. The Trixie’s meter was reading gusts to 19 with the lulls not far behind, and even the relatively protected cove in front of the marina was whipped into a froth of whitecaps. We put a reef in at the dock. As soon as we got out past Berkeley Island, we put out a scrap of jib, and we were rocketing down the bay. The broad reach started to look like a beam reach as we accelerated, and we sailed right past Forked River and wound up well past BI. Even though we were reefed down, we topped out at 6.3kts on the GPS, which is our fastest recorded speed ever—above our theoretical hull speed of 5.8kts.

When we finally turned around we had to beat back, and sailing close hauled wasn’t quite as fast and made us heel a lot. I had the rail buried, and some settling may have occurred during shipping in the cabin. Jen was not exactly happy with this, so we furled in the jib and sailed on to BB. 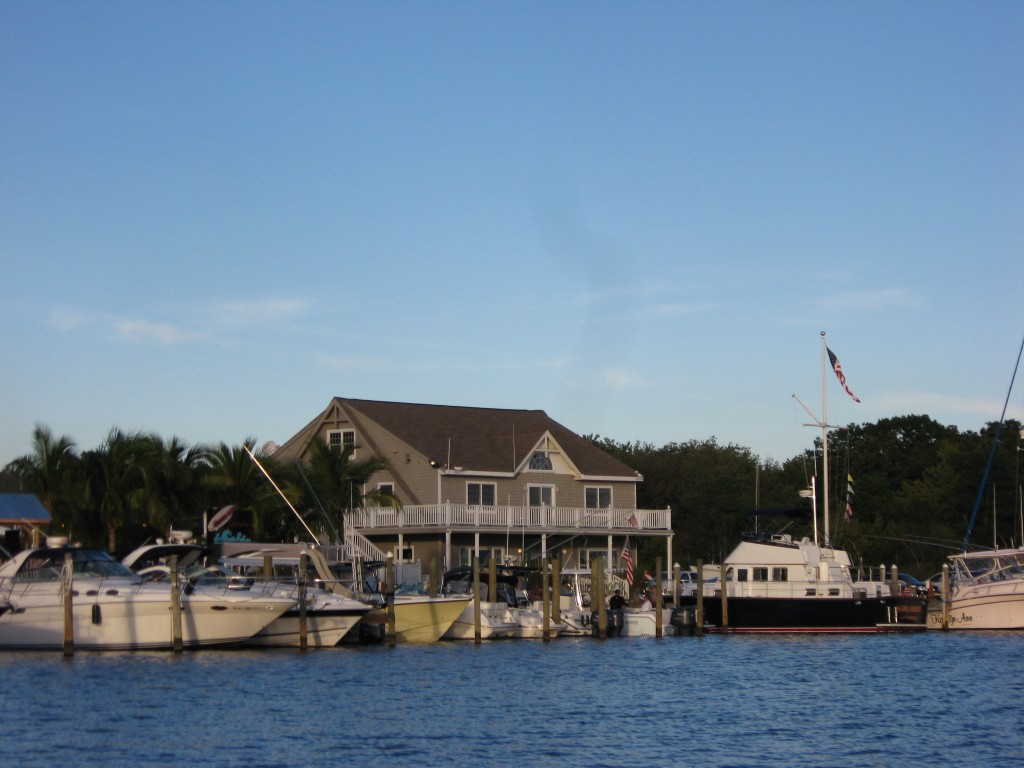 The approach to Forked River is well marked from BB and we had no problem finding our way, even with the eponymous fork. Things were still jumping in the river despite it being past Labor Day, and we were treated to live music from a couple different restaurants along the bank. We eventually made it to the marina with little daylight remaining, and were able to get into our slip without too much trouble…the main problem being that it wasn’t deep enough for us to get into with our keel down. Once we got that sorted out, we probably did our best job of tying up to date. While staying in marinas may be less hard-core than anchoring out, at least we’re getting some practice pulling in and out of slips and tying on spring lines and things. 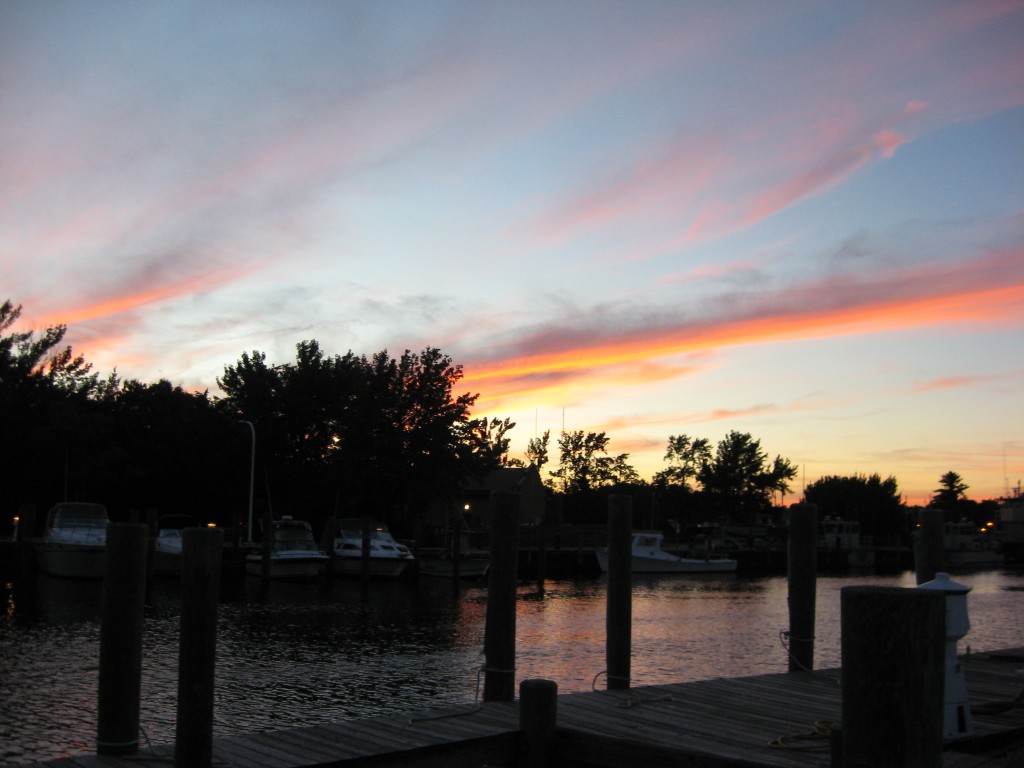 The reason for the live music on the river didn’t become clear until later. We had randomly picked the time and location of the annual Rock the River Boat Parade. I’ve heard of this sort of thing in other places, but didn’t know it happened one town away from where we keep our boat. It’s an event where people decorate their boats with lights and dancing girls and drive up and down the river playing party music. This was quite a spectacle to happen into, and while the turnout may not have been what the locals were expecting, we were enthralled by the fortuity. 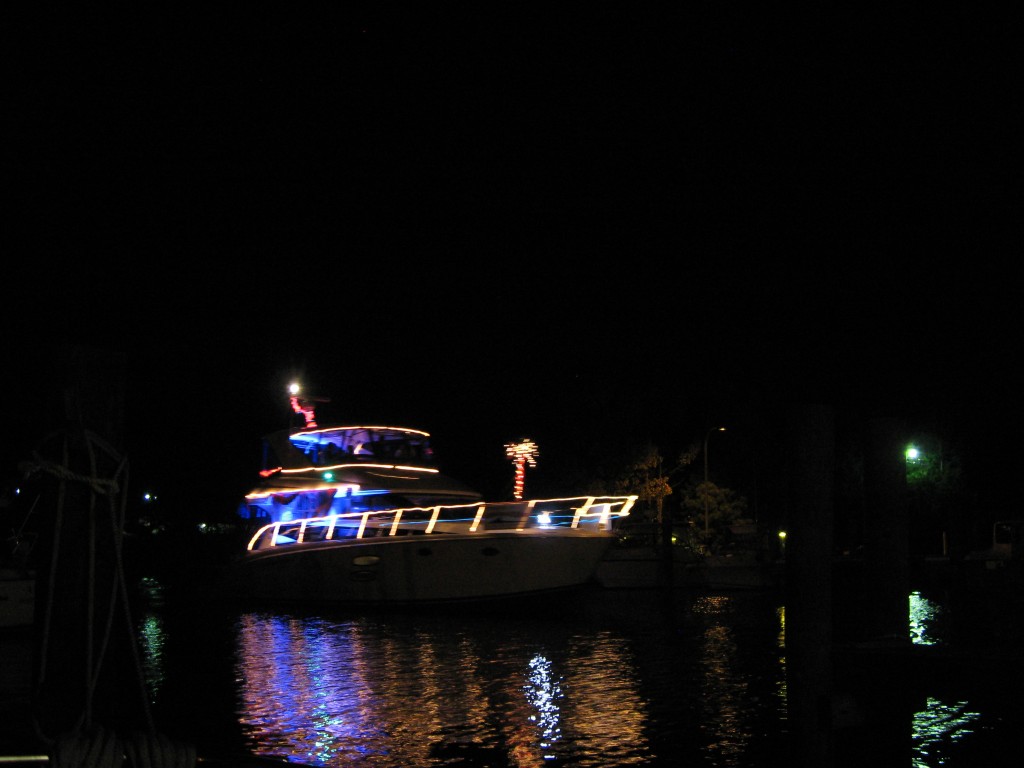 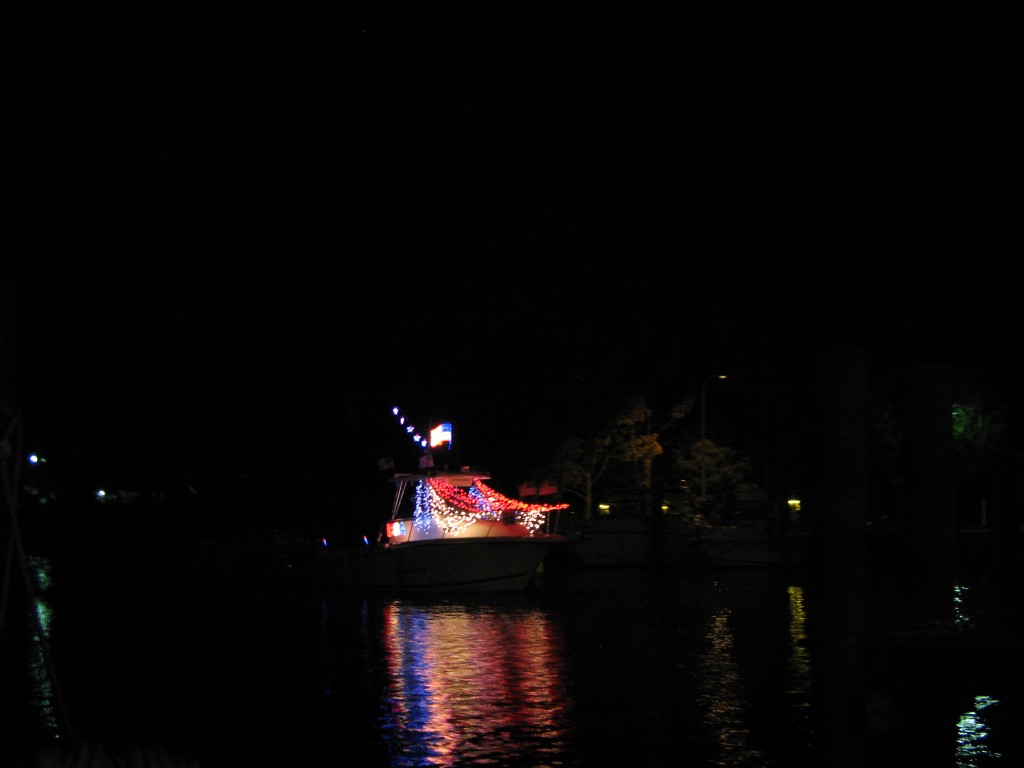 It was wonderfully cool overnight and we slept well. In the morning we had a better chance to explore the marina, which was pretty nice. We especially appreciated the private bathrooms, which were clean and well suited to our relative modesty. We briefly entertained the idea of cooking breakfast on the boat but opted to walk the half mile to a local diner. I’m pretty sure that anything we could have cooked would have been better, but at least we didn’t need to convert our bunks to a galley to prepare it. One of the things we look forward to on our next boat is having a dedicated galley that is distinct from Jen’s berth. On the way back from breakfast (perhaps brunch by the time we rolled out) we wandered through the Forked River State Marina where we were taunted by a beautiful Sabre 30 for sale.

Back at the boat, we made preparations for the sail home. The blind turn out of the marina into the river was a little unnerving, so I let out one long blast from our horn to indicate that we were coming out. This may have freaked out the locals a bit, but it made me feel better, not to mention quite salty. Instead of making the left toward the bay, we turned right and motored up to the head of navigation just to complete the circuit. I think you’d have to duck to get under the Rt. 9 bridge in a kayak, so it was definitely the end of the line for us. We spun around in the state marina and chugged out of the river. 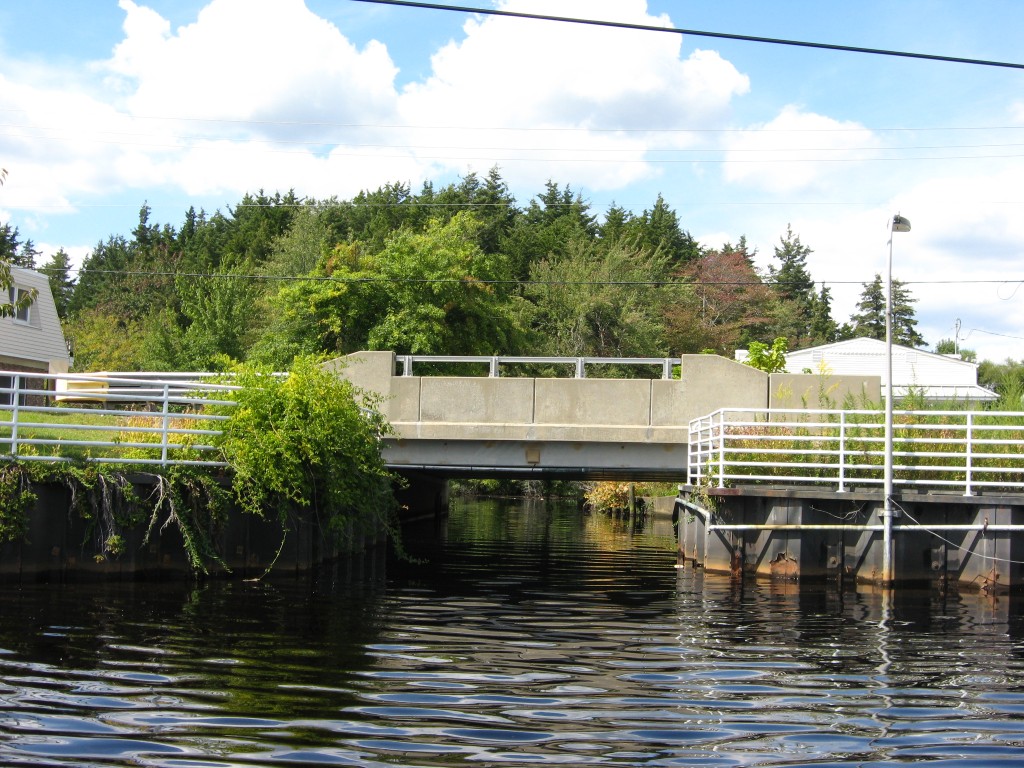 We had a lazy sail back on just the full jib in about 10kts of southerly wind. Jen hasn’t been getting much time at the tiller, so I persuaded her to take a turn. She got nervous and worked into some kind of weird half-kneeling Tebow-esque position, with a death grip on both the tiller and cockpit coaming. She really wanted to quit, but I helped her reacquaint herself with the subtlety of the control by steering with her for a while and then she agreed to keep the helm on her own until we got to marker 40. She did fine on that leg, and was able to remain seated. I feel like all I can do is follow the lead of Viper in Top Gun and get her flying again until she feels comfortable enough to chuck some dog tags off of an aircraft carrier. She’s a good sailor, and I think she just needs to put in the miles to gain some confidence.

All in all, we had a pretty good weekend with plenty of adventure and surprises, especially for only sailing to the next creek.