The sails were prepped. The mooring lines had been cast off. People on land, still toiling at their bottom painting and de-winterizing tasks, were waving bon voyage to us as we motored out of the marina.

Fortuitous splashed on Friday. I took off work and made my way to the shore so that I could tend to some last-minute preparations, such as grabbing the dock lines from the lazarette and brushing the last of the barnacle residue off of the prop. The boat was already in the slings when I arrived, however, so I got to do neither. Only staff are allowed under boats once they’re in the lift, so the marina took care of the prop, and assured me that it wouldn’t be a problem getting the boat into a slip with no dock lines prepared. 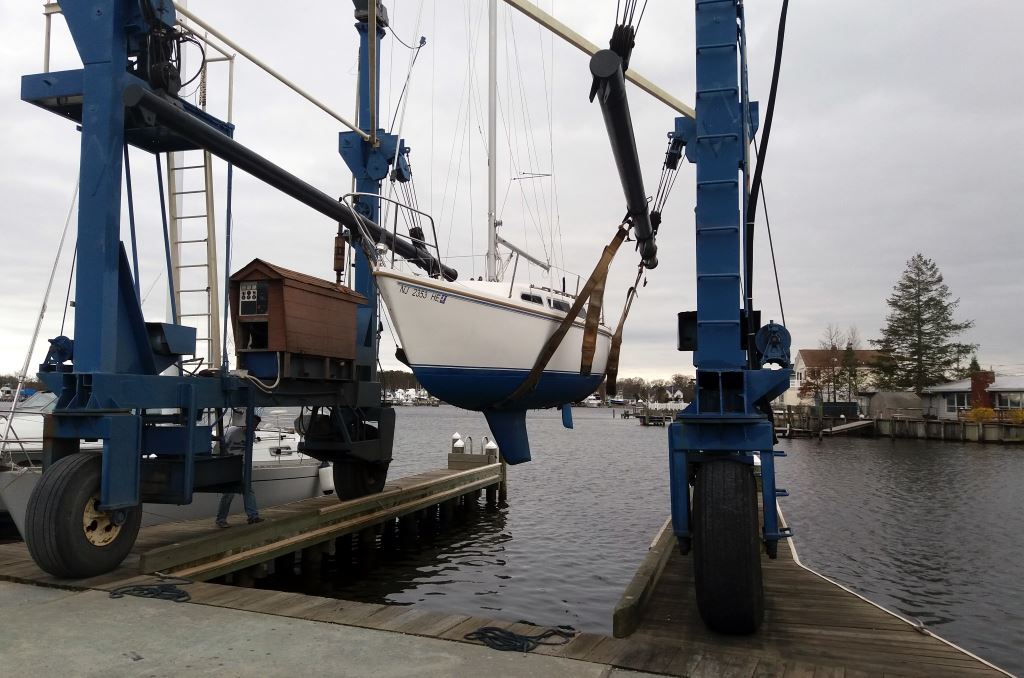 This would, by no means, be complicated by the fact that it was blowing a near gale in 45° with light, stinging rain. My recently re-waxed Filson Oil-Finish Shelter Cloth Outfitter Jacket was in the car, and I think it would have gone a long way toward keeping me warm and dry, but the yard guys were only wearing sweatshirts and I felt like I’d be causing a scene by costuming myself as if preparing for the Klondike Gold Rush. Of course, I don’t own any sweatshirts, or anything with “sweat” in its name, and was already half way to the Yukon in my Filson Alaskan Guide Shirt.

I boarded at the crane dock with the boat still slightly supported by the lifting straps. With eight-Mississippis of glow plug, the engine started right up. The yard crew lowered me until the boat was displacing her full weight, took off the aft strap, and I backed out into the creek.

I juiced the throttle a little to get more way on, trying to overcome the stiff headwind that wanted to throw the bow to one side or the other. I didn’t want to go too fast, both because I was about to dock and because I needed to give the yard guys time to walk down there to catch me, but the wind was too strong to linger in place. My usual approach to the slip involves a wide turn to starboard, using the rudder to bleed off speed as I near the slip in neutral, but I thought that going broadside to the wind for that long would throw me into the pilings, so I approached at an angle to the slip, coming in a little hotter than usual, and threw the engine into reverse to slow my approach and kick the stern into alignment with prop walk. I think everyone was surprised that this actually worked. 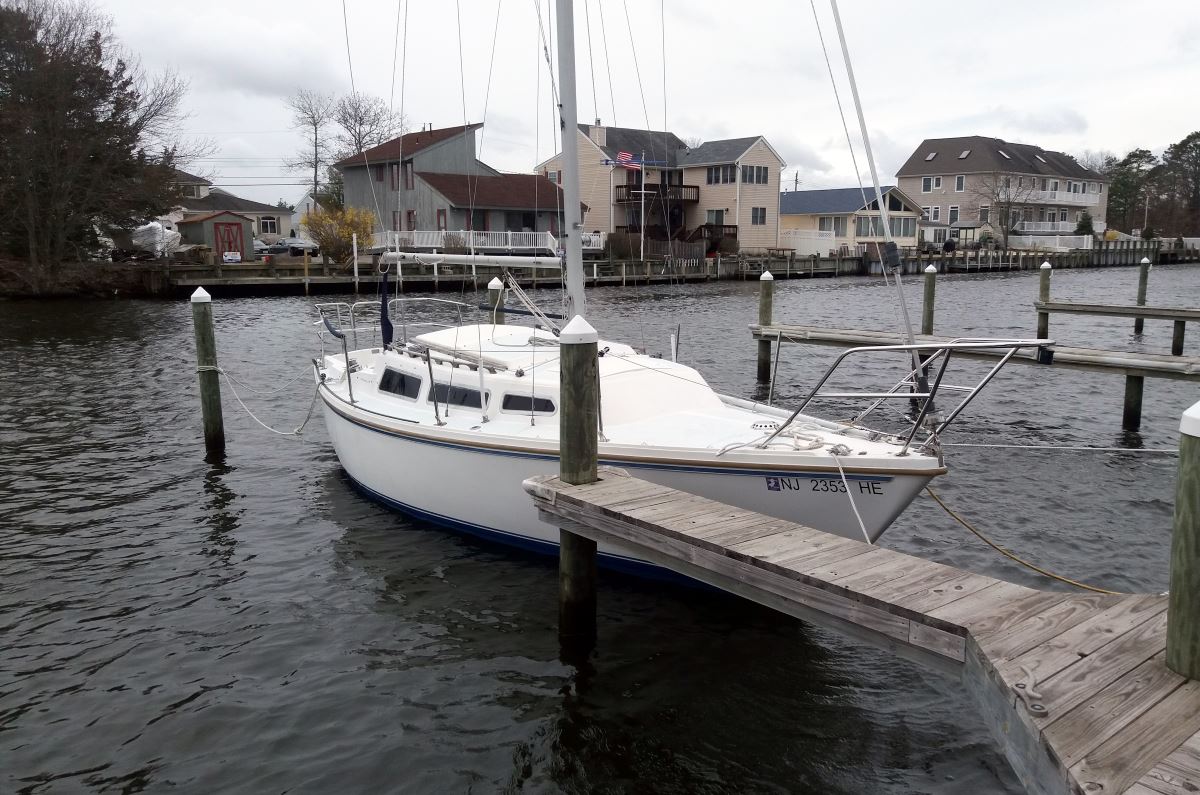 The forecast for Saturday was more gusting past 30kts, so Jen and I decided to head down to the boat on Sunday, when it was supposed to be warmer with more reasonable winds for a shakedown. The plan was to put the sails on, do some quick spring engine maintenance, and go sailing.

The sails went on fairly smoothly. So smoothly, in fact, that it started to seem like a good opportunity to postpone the maintenance and just sail. Jen was hesitant about this, observing (correctly) that the maintenance needs to get done, but the wind was up and the sky was clear and I really wanted to get out there.

So we tucked in a reef, just to be conservative, started the engine, and went on our way—right up until we got to the point where there are supposed to be channel markers that let us know where the navigable water is. As we eased out into what I imagined might be the unmarked channel, I thought, “We do this all the time. We should be able to eyeball…” Thunk. The depth finder abruptly matched our keel’s depth.

Having ridden up on a mud flat, we had time to reference our telephones, which theoretically have charts in them. They indicated that we were directly in the channel, yet somehow, we were notably aground. I backed us off and tried a slightly different approach, but the result was the same. We turned around and did the dock of shame, having been “out” for less than 10 minutes.

I assume that this was, in part, punishment for not performing our scheduled maintenance, so we rectified our karma deficit straight away. We replaced both fuel filters and bled the air out of the fuel system. We replaced the impeller. I installed my birthday present from Jen: a new dipstick (this is a convoluted story involving a broken dipstick that a previous owner had used as a dipstick-hole plug while the full-sized dipstick was left to rust in a clever hiding spot beneath the ice box.) Finally, we replaced our heat exchanger zinc, which was apparently well beyond prime condition. 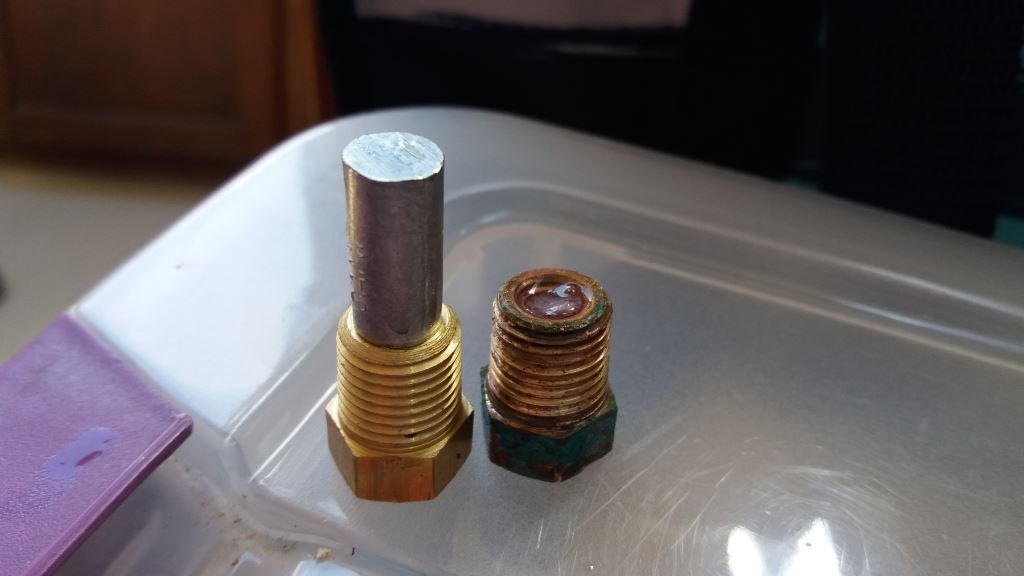 Better late than never, I hope.

We were so close to sailing. If I were physically capable of optimism, I’d consider that we’re still way ahead of the curve: it’s ridiculously early in the season, and we’re one of only three or four boats in the water at our marina. Technically, we have already boated in some capacity (however brief and ill-fated). I’ll certainly feel better when we can hoist some sails, shut off the engine, and glide around the bay like wind-powered poets, but the lingering smell of diesel on my hands may be enough for the moment. We put in some good work, and we’re well prepared for a great season of sailing. The realist in me just needs to figure out what state agency is in charge of seasonal markers so that I can start calling them every twelve minutes until they install the Cedar Creek buoys.

4 thoughts on “And Yet So Far”