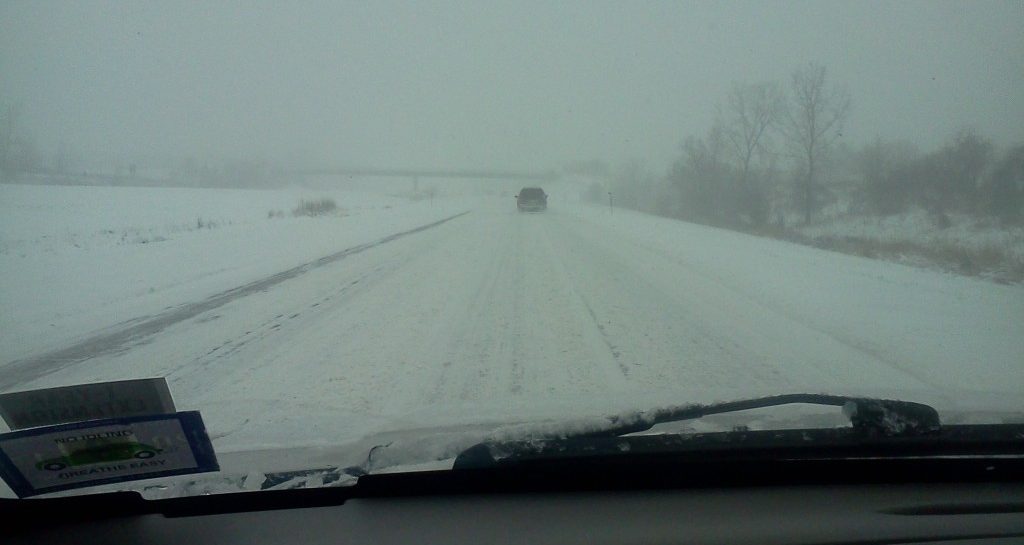 For my birthday(ish) we decided to go to Toronto, ostensibly to go to the boat show but also just to get out of the country for a bit and hang out with some Canadians. I’ve struggled with trying to phonetically spell the two “outs” in the previous sentence to capture the Canadian pronunciation, but it’s definitely not “oot” and I’m not sure that “auwt” will be interpreted correctly. I’ll instead link you to a delightfully outdated page from Canadian linguistics professor Taylor Roberts on the Canadian Raising.

We have a particular fondness for Canada. Early on in our relationship, Jen and I were bored and decided to randomly point to a spot on a map and go there. The place we chose was Newburgh, NY, which turned out to be so uninspiring that after seeing a sign reading “MONTREAL 300,” driving another 5 hours seemed more reasonable than staying there. Montréal turned out to be wonderful, and because of that trip it’s always been a special place for us.  We’ve been known to head up there spontaneously, to the point where we carry Canadian money on us at all times.

This trip was a little more organized, however. I got up stupidly early on Thursday morning so that I could get the oil changed in my truck before work. We don’t usually take the truck on vacations because the car gets way better gas mileage, but the truck has four-wheel-drive, which is nice when traveling in the hinterlands in January. I got out of work a little early and we drove as far as we could Thursday evening, which happened to be Bath, NY, a little more than half way to the border. We stayed in a fairly cheesy (but fine) motel with forecasts of an inch or two of snow.

We woke up on Friday to at least a couple inches of snow and more falling. We set off to deteriorating conditions toward Buffalo. 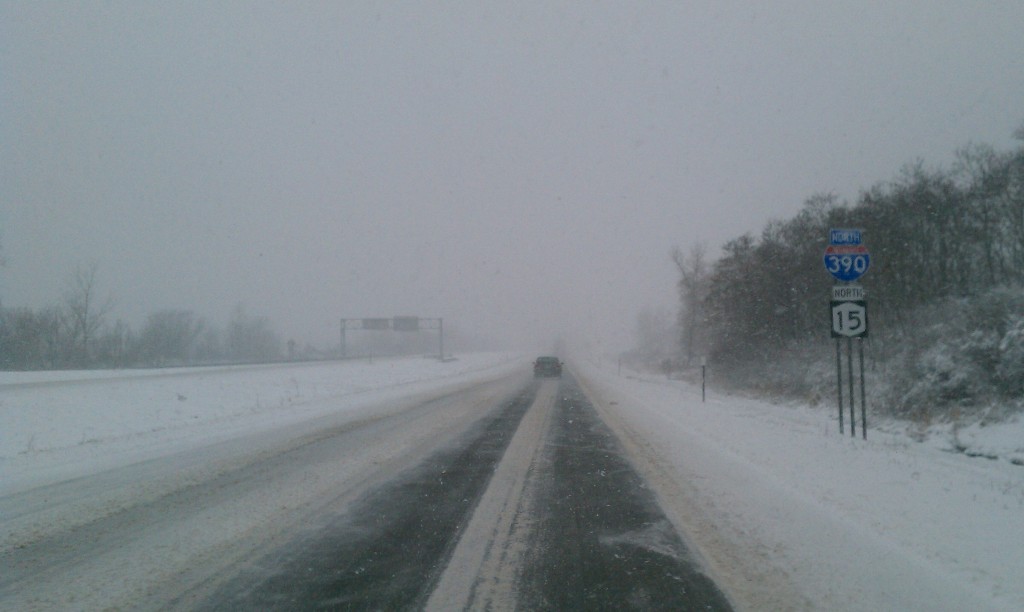 I kind of expected that at this latitude a little snow would have been no big deal for the locals, but the roads weren’t that great and people seemed to be doing the typical “first snow of the year” dance that I’m used to in NJ: sedans creeping along at 10mph and 4x4s out in the left lane going 70. The ride up was fairly stressful, and at some point the windshield washer fluid (which had been freshly topped off that morning with my oil change) froze, leaving me with even less visibility in occasional near whiteout conditions. There were a lot of vehicles in ditches and roads were being closed, but we found a path to the border. 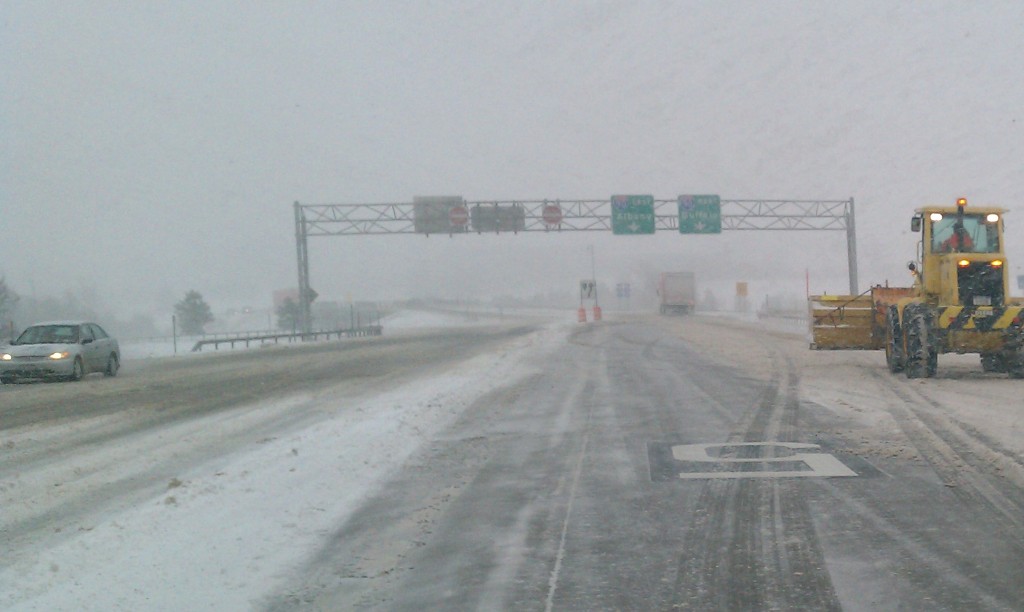 We had an easy crossing into Canada at the Peace Bridge in Buffalo, and a few things happened immediately when we left the country: it stopped snowing, our phones died, and I started getting sick. The snow situation was curious. The border agent said that they were threatening to close the QEW, but the snow was light up there and the roads were well-tended. I guess it should have been expected that the phones wouldn’t work, but I didn’t really anticipate it. Jen was able to roam on her phone, but that was voice and text only and what we really needed was data to make the maps on the nav app go. My phone, with my cheapo plan, wouldn’t talk to a Canadian tower at all. Worst of all, I started to get a little tickle in my throat and was pretty sure that I was coming down with a cold.

Still, we pressed on. Like any prudent sailor, we had our paper maps as backup to our fallible electronics, and we used them in conjunction with bljones’ directions to make our way on Rt. 3 toward Port Dover, ON. Our first destination in the Great White North wasn’t Toronto, but to stately Jones Manor where we had a colossal meeting of sailing bloggers. I knew bljones, author of the Dock Six Chronicles blog, through the sailing forums, and I think we first interacted outside of the boards when I won the Dock Six Top 20 Countdown contest (with a little Google assistance on the can-con). He and his wife were great to hang out with and we went to a unique Canadian Thai/pub-grub place. We even got to see the mortal remains of donor boat, which is providing essential parts for the new boat that he’s building.

We couldn’t stay too long though since we had reservations in Toronto. Our paper road atlas was woefully inadequate for navigating in a city, so we wound up stopping at our third Tim Horton’s that day to grab a wifi connection long enough to get directions. We also got the most expensive tank of gas ever: $1.20/litre is like $4.54/gallon. With our hand scribbled directions we made it to our high rise hotel near the Cabbagetown neighborhood of Toronto, a little outside the most touristy part of town. Our hotel was fairly unremarkable except that it somehow also served as a dorm for some local college (Ryerson?), so there were young people in the lobby doing curious things, like asking permission from the front desk to go outside. 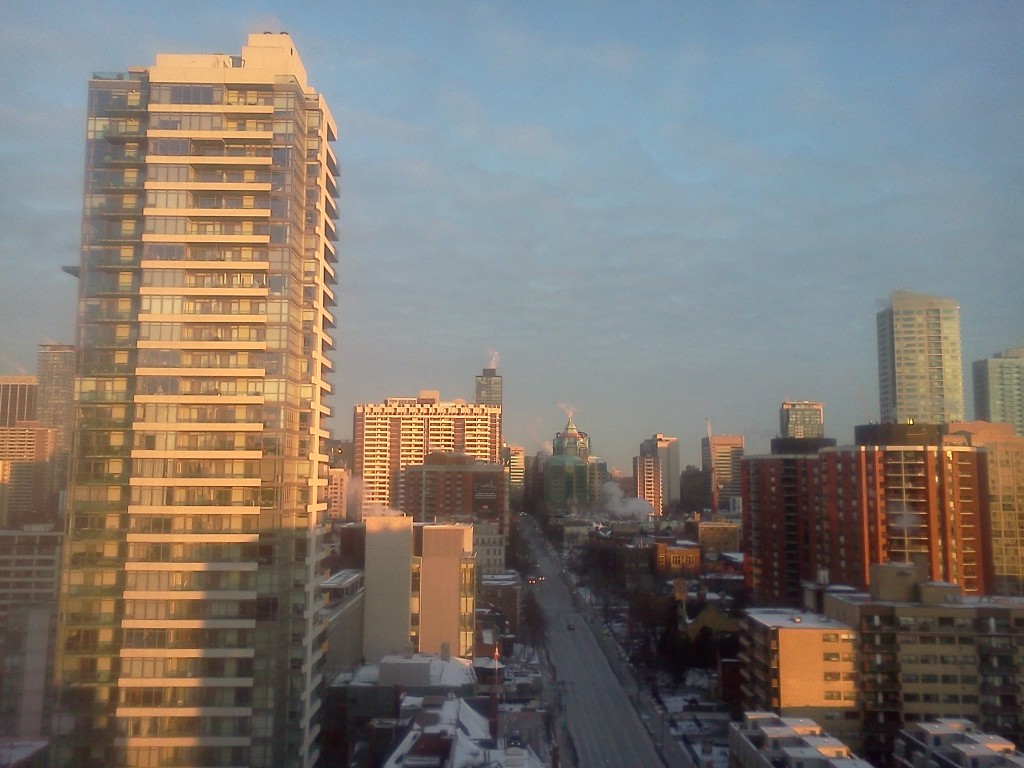 All I’d heard all winter from my Canadian friends was how unseasonably warm it had been. Every conversation was “It’s like 17C out there; I can’t believe it, eh? I just ran up to Timmies in shorts and a touque.” Of course when I show up, it suddenly becomes seasonably cold, which in Canada means that walking outside is instant pain and walking five blocks to find a Rexall that will sell you a streetcar token could cost you a finger or two. My personal cold was getting worse too.

We took the 506 streetcar to Bathurst and picked up the 511 to the Toronto International Boat Show. To be honest, our reporting on the show is going to be limited. I was feeling bad, we didn’t stay that long, and it was our second boat show with a few months—neither of which was Annapolis, which has completely spoiled us for boat shows. Toronto is [mercifully] indoors, which was a bit of a different experience. The ceiling isn’t high enough for most of the boats to be rigged, so there are few masts and you have to imagine how the sheets are lead and that sort of thing. You can see the keels though, which you’d never see at an in-water show like Annapolis or Newport. We briefly stepped aboard the Catalina 309, the Hanse 385, the Hunter e33, and the Beneteau First 30. We both loved the Hanse, which is like 8ft longer and 30 years newer than anything we’ll ever be able to afford.  Jen also liked the Catalina and I liked the First, however inappropriate it is for the type of sailing that we do. Even though I own a Catalina, I don’t feel like a Catalina fanboy, but I can tell you that my inner Calvin definitely pisses on Hunter for some reason.

The show was around 85% powerboats. I actually took some pictures of these because I started to become obsessed with the 9ft long decals that seem to be on the sides of all of them, with the brand name in letters 12in tall and faux carbon fiber and honeycomb patterns built into the flames and tribal tattoo imagery. I’ve decided not to post them though, because like having PONTIAC in huge letters on the windshield of your Sunbird and a 5-inch diameter exhaust pipe, I assume that I’d be playing into their desire to draw attention to themselves.

We had hoped that Jen could find some foul weather gear while we were there, but despite the acres of vendors, there weren’t all that many selling foulies. There was an entire wing of things not directly related to boating though: dozens of booths, seemingly all staffed by some variant of the Sham Wow guy, selling knives that can cut a beer can in half and still be sharp enough to make sashimi, or cookware that allows you turn an egg into a disk of carbon without it sticking.

This all sounds kind of negative, which is admittedly my nature, but it wasn’t that bad. My mood was just low, I wasn’t feeling good, and I’m easily overwhelmed. For example, they flooded an adjoining hockey rink (does it get more Canadian?) and made an indoor lake with ramps for wakeboarding or something: 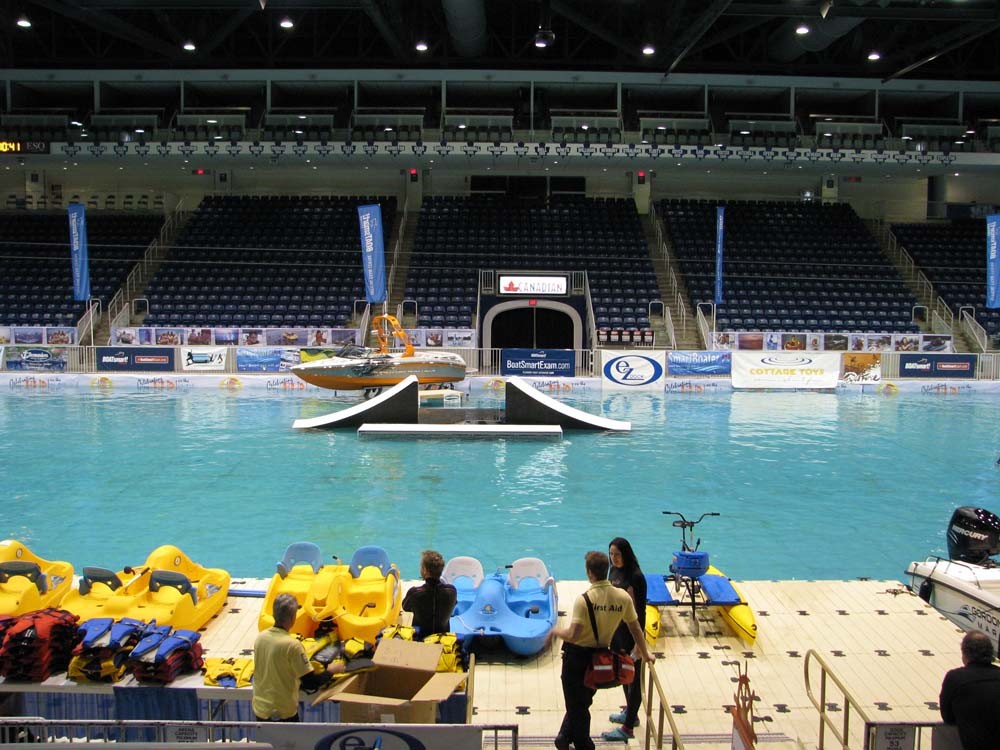 While I would have loved to have stayed to see Fonzie jump over a shark, I needed to get back to the hotel, drink a bunch of tea, and take a nap.

Between my illness and our lack of electronic communication, I missed my connection with Alchemy from The World Encompassed sailing blog. That was a bummer, but I was glad to have some time to recuperate.

Sunday, we were off to Hamilton, ON to hang out with my good friend Joe and his family. I loaded up on antihistamines and we took a whirlwind tour around the Niagara Escarpment. Highlights included: 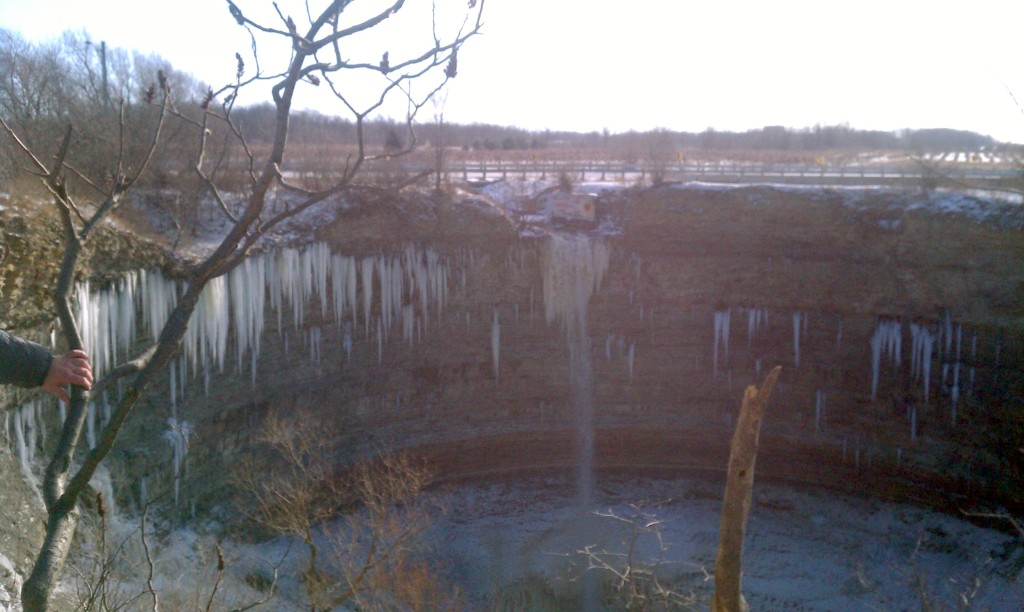 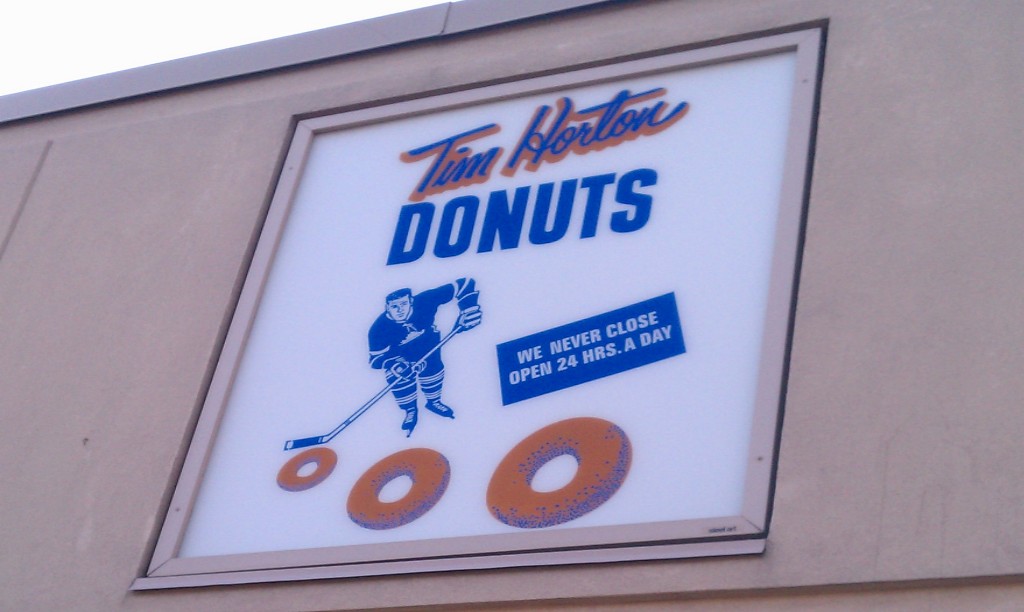 We had a great time. The drive home (we took the Rainbow Bridge to see the falls) was pretty uneventful. My knowledge of both smooth and classic rock once again trumped Jen’s knowledge of marginal 90s country and I won again at “name that tune” using the seek function of the radio.

We’ll probably get back on track with the US Sailboat Show in Annapolis next year, but Canada is still highly recommended.