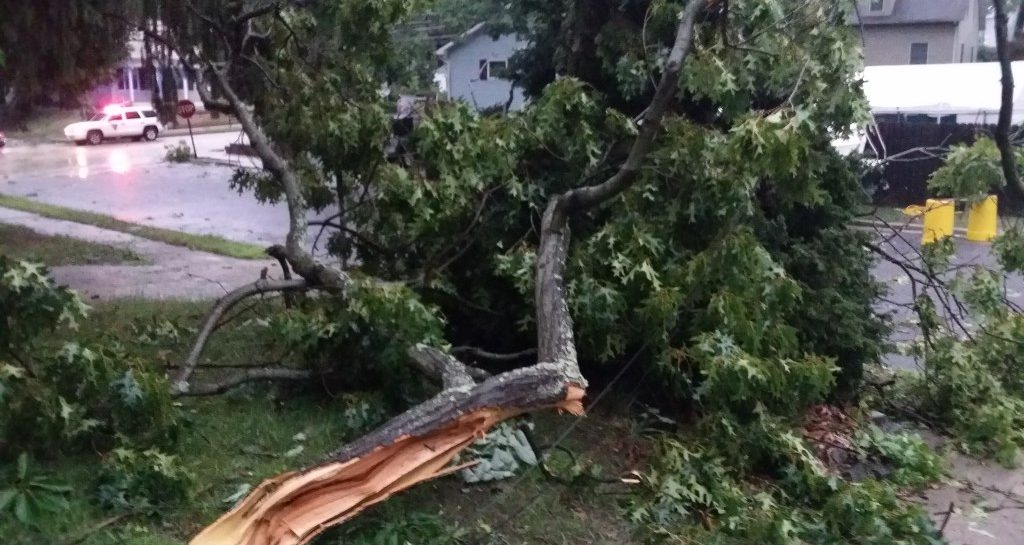 Sailing was limited this weekend, mostly due to weather.

And not even the weekend weather…we were still dealing with last Tuesday. Tuesday is my usual race night, and I was already en route to the river when I got word that the race had been cancelled due to predicted thunderstorms. I diverted toward home while my telephone chirped with increasingly dramatic weather warnings, culminating in my first “Extreme Alert.” 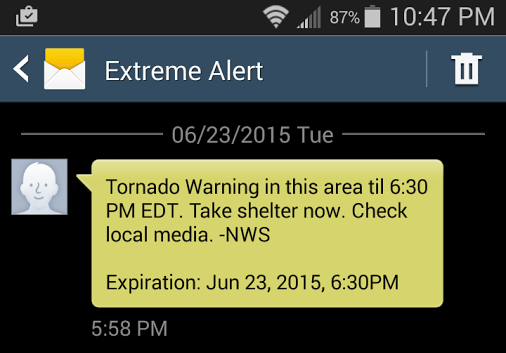 The default avatar was pretty cheery, considering the gravity of his message. Despite mass-marketing’s attempt to dilute the power of the word “extreme” by yelling things like “EXTREME YELLOW SPORTS DRINK!” or “X-TrEmE bAdMiNtOn GRUDGEMATCH!!!1!” I happen to know enough about pre-Vatican II Catholicism that in dire times, I’m still able to conjure up ideas of the Extreme Unction, which, as a term, is about as X-TrEmE as it gets.

Jen prepared a ditch bag while I ignored the extreme advice and wandered around outside like Lieutenant Dan.

The sky to the east was an oily charcoal gray, and as the storm approached it became like night. The wind immediately went from nothing to 50 or 60kts (there were recorded gusts to 65kts in neighboring towns), accompanied by driving rain and persistent lightning. The trees writhed under the load and started coming apart. I was pelted with a fusillade of twigs and bark and other hurricane-speed debris, and eventually came inside after a neighbor’s tree exploded.

It was over almost as quickly as it started. Our house and cars made it through unscathed, but there were branches down everywhere, some of them quite substantial. A few in the “barely movable” category fell along our driveway, and were so tangled up with each other that I needed to cut them apart with a brush saw to be able to clear a path for my truck. Our power was out, but the only downed wires that we could see from our yard were cable TV. Cell service was also out, leaving us completely off the grid except for my wind-up emergency radio.

As the light rain that trailed the storm dissipated and the overcast broke, the sky turned a ridiculous shade of yellow. I’ve never seen anything like it. The following photo is not retouched. 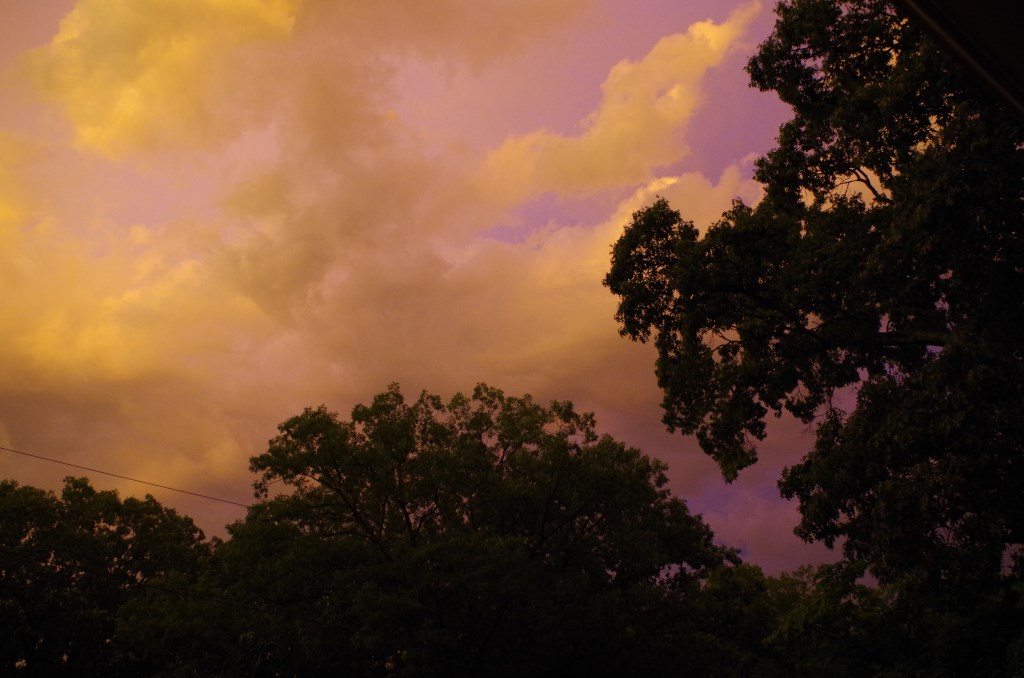 After checking in with the neighbors and seeing that things were mostly ok, I started to become worried about the boat. We had no way of knowing exactly where the storm was going, but it was definitely headed toward the shore. I decided to take my brush saw and my crazy orange rubber raincoat and go check the dock lines.

The damage was far-reaching. Between the downed trees and wires and possibly flooding, many of the roads around our house were closed. With the power out, none of the traffic signals worked, and most people apparently hadn’t gotten the memo about treating them as four-way stops. Like drunken powerboaters navigating by random guess, every intersection was a test of horsepower and irreverence toward humanity. Although if that’s the game they want to play, it should be noted that I have 291hp and a fluid sense of cordiality when I feel that it might not be mutual.

My instinct was to go for the highway, which is not direct, but seemed more likely to be clear. Getting to a working onramp required a deep familiarity with tertiary roads and a little luck. Just before I found a path, I came across a Super Wawa that still had power. I thought “Oh, I should stop for gas,” which is exactly what everyone else within a 10 mile radius also thought. The parking lot was full beyond capacity, with a parade of vehicles slowly orbiting the building and lines 8-cars deep at the gas pumps. Of course, there was also a working gas station across the street with no one in it, so after one horrifying lap I went there, imagining people in Wawa fashioning shivs out of Icee straws to do battle for the last bags of ice.

I blew through the dead toll booth and got onto the expressway as the yellow sky gave way to deep reds and violets in my rear view mirror. Ahead was the storm. The wide expanse of the highway gave me an unobstructed view as lightning bolts arced across the entire visible horizon. There were no problems on the highway, and travel was unencumbered all the way to Berkeley Township. It was as if nothing had happened there. Lights indicated that the power was on, and there were no signs that a severe storm had been through. I went and checked on the boat just to be sure, but the worst of it had passed to the south and Fortuitous was fine.

For the return trip, I thought that things might have started to calm down, so I took our usual route through the woods. Not too far in, I re-entered the storm’s swath of destruction, and it became clear that things had not calmed down. Even on the perimeter, deep in the pines, it was darker than I’d ever seen it. High clouds obscured the stars and with no light pollution to illuminate them from below, it was utterly black. I know those woods and those roads intimately, but even I didn’t notice that I was blasting through the traffic light at the retirement community until I was already through it. Regardless of the post-apocalyptic feel of it all, I slowed down and tried to act less Mad Max for the rest of the drive home.

In the end, our power was out for a full two days, and during that time we had no telephone service (land line or mobile). The weather cognoscenti were adamant that there were no tornadoes, although I have yet to hear an adequate explanation for this: 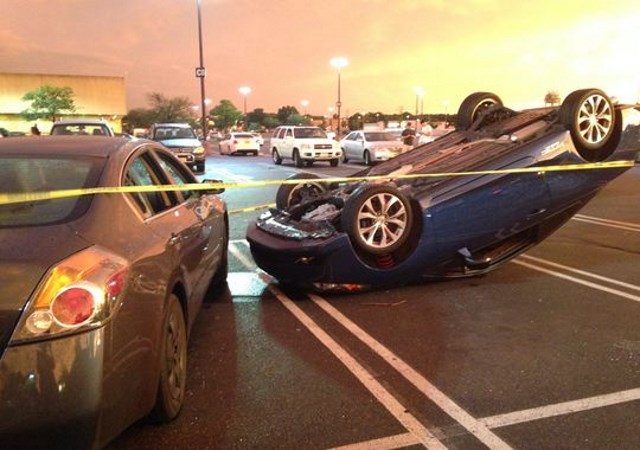 Those must have been some serious straight-line winds.

While it was annoying to have to spend potential sailing time on yard cleanup and return to a 19th century-ish lifestyle at home for a couple days, it could have been a lot worse. We were lucky to have made it out with only superficial damage.