I have very little interest in (and some might say taste for) fashion or style.

I have winnowed down my clothing options over the years to a few safe choices that I think I can probably ride out for the rest of my life, assuming that the rate of them falling out of style is proportional to the rate at which I’m caring less and less. I also adhere to a few hard and fast rules that have gotten me by so far, such as only wearing shirts with collars, not wearing short pants in public, and not wearing anything with the word “sweat” in its name.

Along those lines, I used to exclusively wear Sperry Top-Siders when sailing. Specifically, the Authentic Original 2-Eye Boat Shoe in the neutral tan color (“Sahara”) with the brown siped sole. They’re a classic. I was wearing them long before we had a boat, and they seem to fit the bill for what most people need in a boat shoe.

And this is where this product review turns into a confessional. Last year, I strayed from the Sperry line. I was tired of needing a new pair every year at a suggested retail price of $95, and tired of them getting weird and gross after any contact with salt water (and/or possibly a lot of contact with my sockless feet). I tried something new. 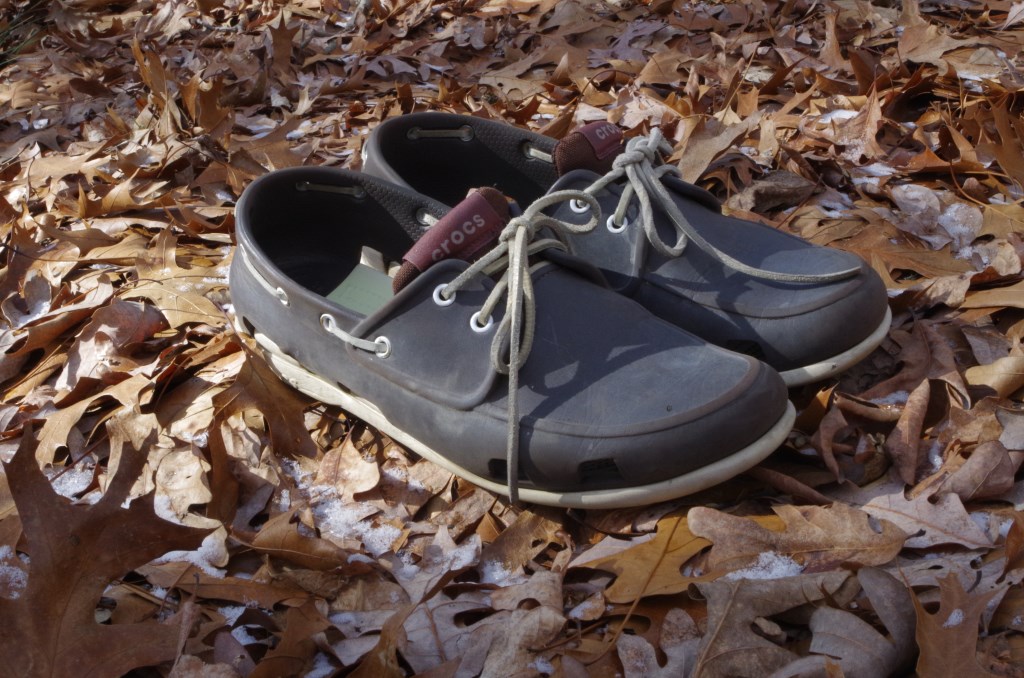 Yeah, they’re Crocs. They’re not the traditional Croc clogs, or whatever those “I’ve given up on life” foot bags are, but they’re made out of the same Croc material fashioned into the shape of a boat shoe. They’re kind of like the foam that comes under hamburger, but thicker and more rubbery. They weigh almost nothing. They don’t absorb water, and if my feet do get splashed, the shoes drain and dry quickly thanks to the scuppers. They provide plenty of traction and don’t mark the deck. They’re extremely comfortable, cool on a hot day, and they were like 1/4 to 1/3 the price of Sperry’s. I even think they look reasonable. I love them.

They’re still not that durable. After a year of use, most of the treads are gone in the useful places and I’m starting to wear a hole from whatever is wrong with my gait (this happens on all of my shoes, eventually). Still, it hasn’t worn clean through yet (it would have on Top-Siders) and they’re still wearable for land use. They still look (and smell) better than my old Sperrys, and at this price, I don’t mind having them be an annual purchase. 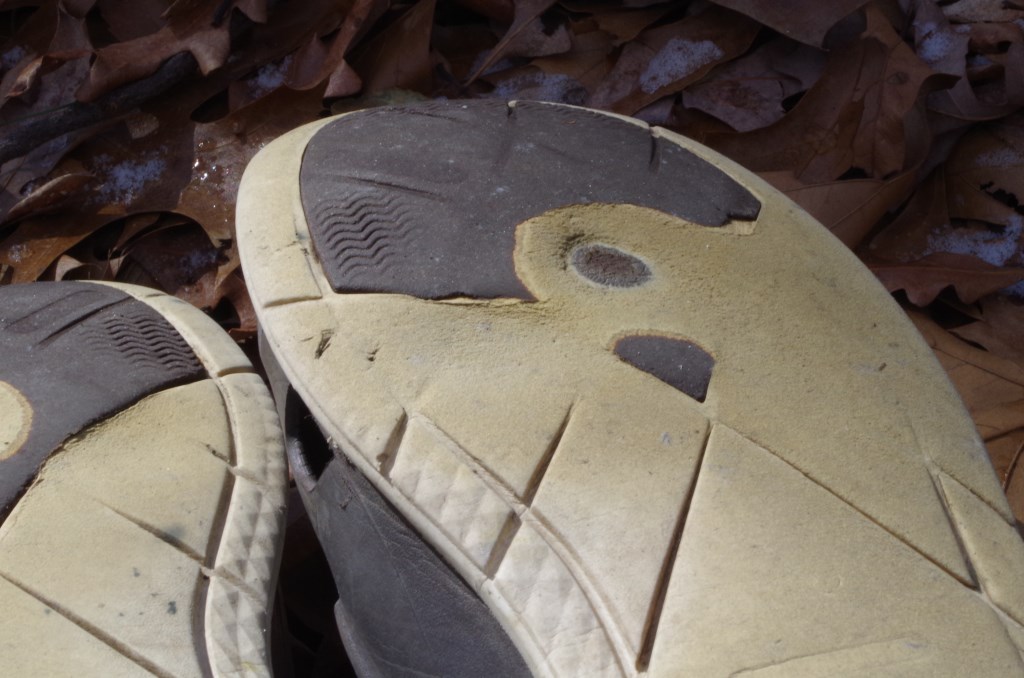 The unfortunate thing is that this particular model (the Beach Line Boat Shoe) has been discontinued, or replaced with a mostly canvas version that holds no appeal to me. I hope they bring the entirely foam version back. In the meantime, I’ve stockpiled 4 more years’ worth. These are the best sailing shoes I’ve ever owned.

In lieu of a heart-shaped box of chocolates or a marginal prix-fixe dinner, my Valentine’s Day gift to Jen this year was to force her to write about her favorite boat shoes, so we bring you:

First, I should say that I don’t share Chip’s clothing hang-ups. For example, when we’re sailing in the cold, he will only wear what he has named “fast pants,” (pants with legs that zip off to make shorts), which are, in his mind, the only viable option for sailing other than “short pants,” his exclusive name for shorts. I, on the other hand, will wear sweatpants with long johns underneath. Yes, that’s right, I wear sweatpants. You’d be more likely to see Chip going bottomless in December than you would to see him in sweatpants, even in the privacy of our own home.

When he had to have lithotripsy for a kidney stone, the doctor told him he’d be groggy and in pain around the midsection when he woke up. He was told to wear sweatpants so he could easily remove them if necessary, and avoid the discomfort of pants with a sturdier waistband. Of course, he didn’t own sweatpants, and since jeans were the most casual of pants at the time (he used to only acknowledge khakis and dress pants as valid long pants), they would probably be fine. To this day, he routinely wears jeans and a belt until bedtime, and I’m not sure he was convinced that anyone would ever actually wear sweatpants outside of their home, if at all. As he was getting dressed to leave the house, however, he put his jeans on and realized how bad they’d hurt if he really did come out of the doctor’s office feeling like someone had beat him in the kidneys as promised. I sped down to the local sweatpants store and found a really soft pair I knew would end up mine in just a few hours’ time. He put them on and probably claimed to “look like a clon*,” which is how he says “clown.” It’s been about 5 years, and I still don’t have those pants as my own. No, he didn’t realize what every other American already knows and begin living in them every moment he is at home. He may have disregarded those sweatpants into non-existence. They aren’t in a closet or a drawer, but likely shoved so far under the bed we won’t find them again until we move.

But on to shoes:

Some people like to sail barefoot. While that seems wonderful and carefree, it’s as practical to me as sailing in heels. If you see people in a magazine or movie doing something while sailing, it’s probably a terrible idea. I need boat shoes, and boat shoes need to provide good traction and have non-marking soles. Any quality brand of sailing shoes should provide these features.

I own several pairs of the well-known brand Sperry, but my L.L.Bean bean boat shoes have been my favorites lately.

I always think I look mannish, so I avoid the classic tan deck shoes. You know that part of the shoe over your toes, before where the laces start? No one knows what that’s called, right? Let’s just call it the foredeck. A shoe with a short foredeck is much cuter (i.e. less mannish), and the classic docksider has too much foredeck. While it might be adorable if Chip and I had matching footwear, I prefer girly shoes on the boat. 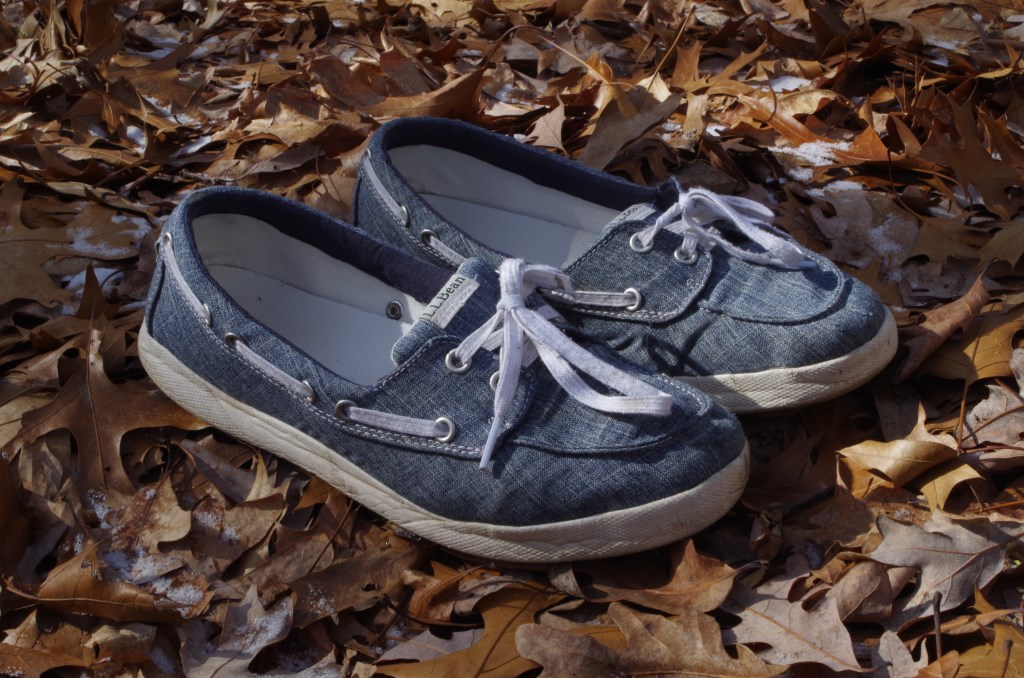 My everyday shoes are currently this pair of L.L.Bean Deck Shoes. I wear them everywhere, including on the boat. I also have them in red, but this beat up blue pair goes with me everywhere. 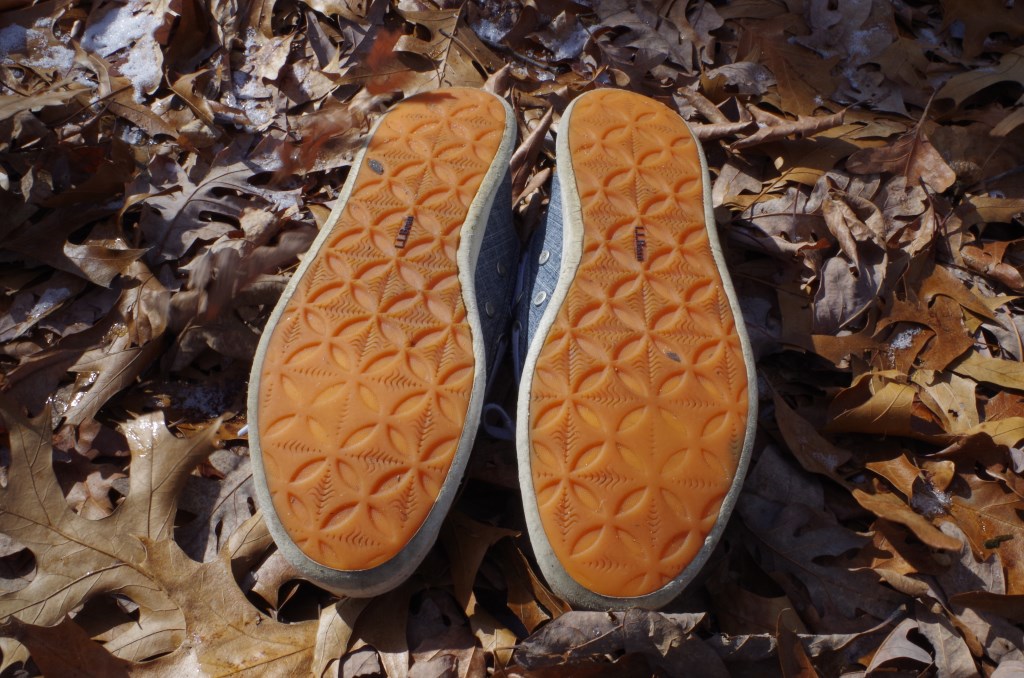 The downside to a short foredeck is that there’s not much keeping the shoes from falling off; they’re essentially a slipper. For rough sailing days and races, I need shoes that won’t fall off, and that means I have to sacrifice fashion for a long foredeck. I know, I may not seem like someone who would give up fashion for anything, what with my one t-shirt in 15 different colors, but yes, even I have to go with safety over looks sometimes. 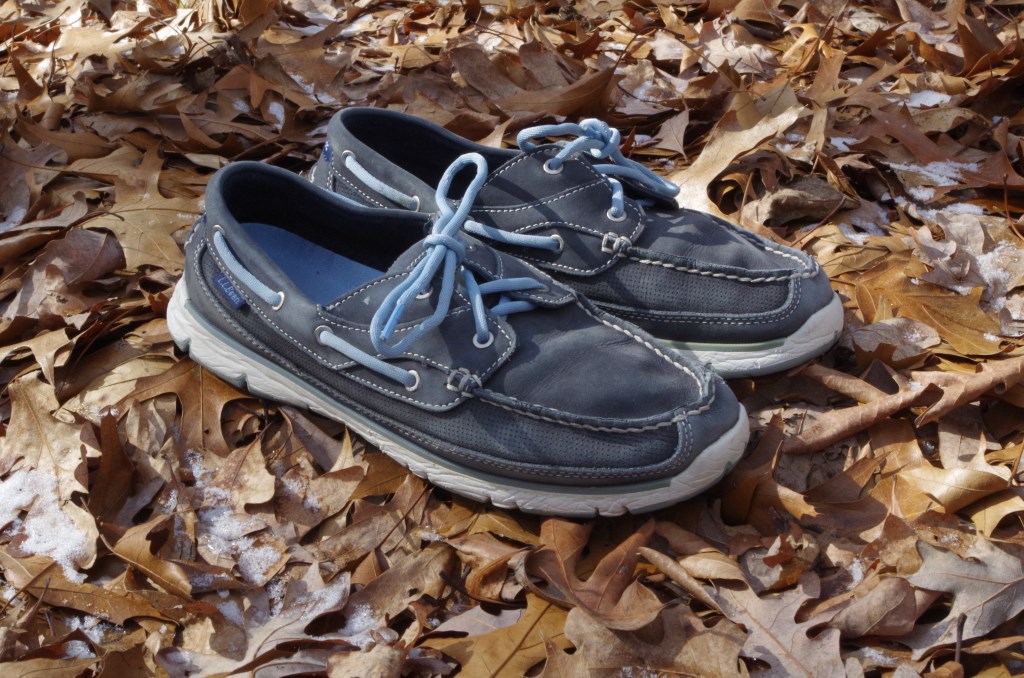 These L.L.Bean Portlander Boat Shoes have a long foredeck and they tie more like sneakers, which both help to keep them on my feet when I’m running around the boat. When I have a leg dangling over the side, I know my shoes will still be with me when I get up. They are comfortable and have provided good protection from rigging and hardware. 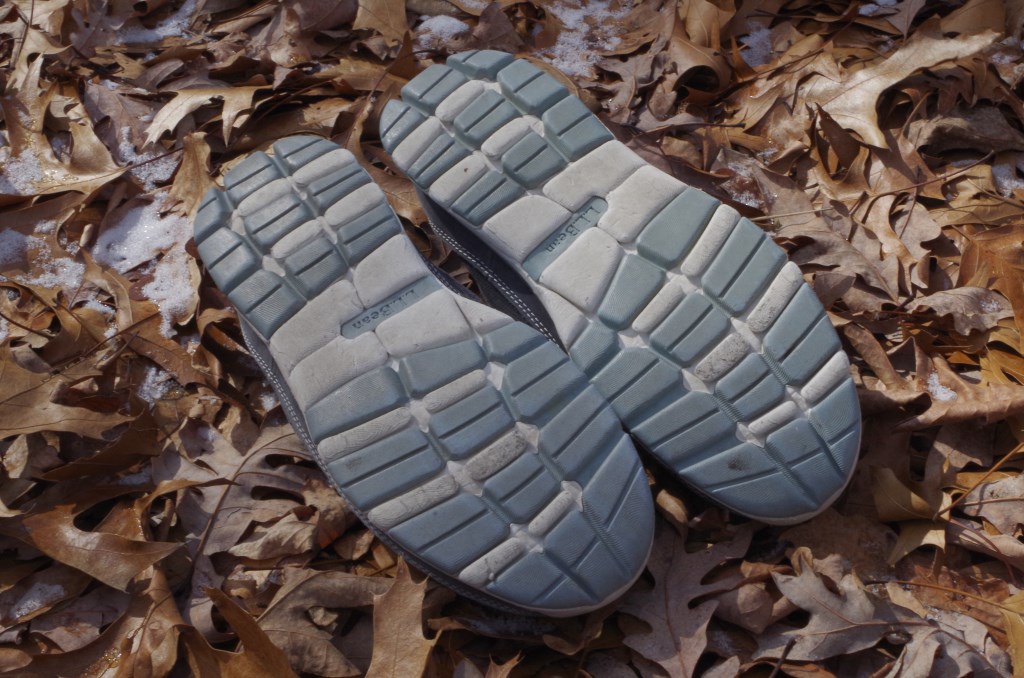 [Note from Chip: I like these because they spell out L.L.Bean with flags on the back.] 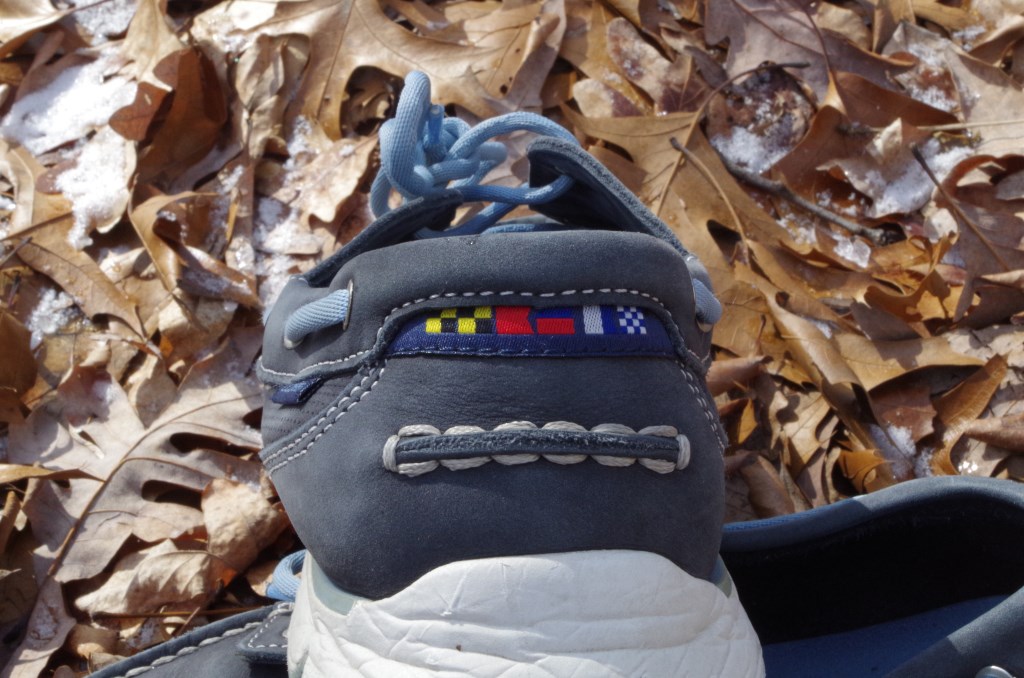 Sperry has a large selection of shoes for both men and women. I have a few pairs of flip flops by Sperry that are great for slipping on to visit the head in the middle of the night, or walking up to the cockpit for breakfast. They have the same great non-marking soles as a full shoe, but are super easy to put on, if you’re as lazy as me and you think putting shoes on needs to be easier.

There are probably other places you can find a good boat shoe, but I will continue to return to L.L.Bean and Sperry.

* Editor’s note: I only say “clon” because that’s how Nico says it in The Velvet Underground’s Femme Fatal.