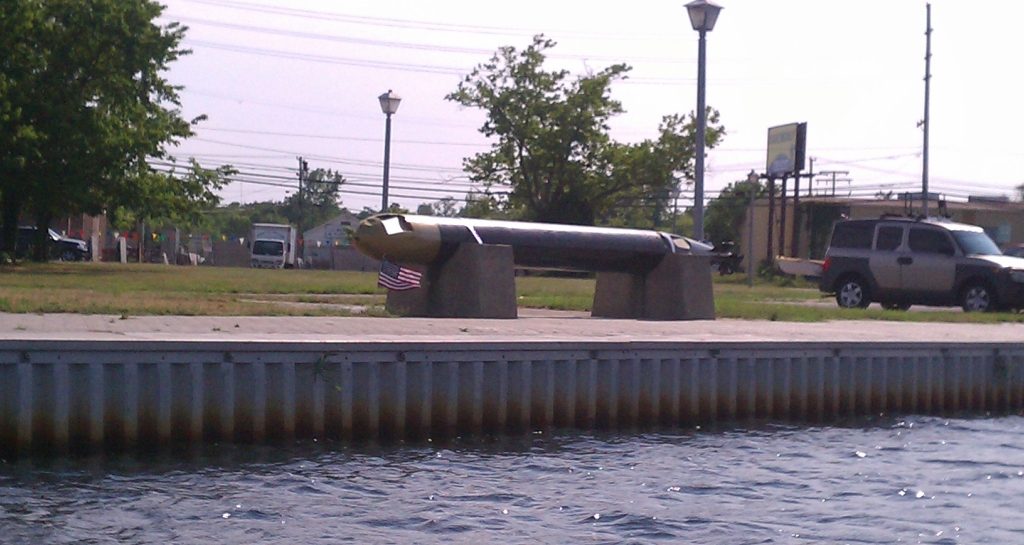 Sometimes the best sails start without a destination.

The Windjammers were in the middle of their fathers day race as we left Trixie’s, so although we had considered trying to find the elusive Myers Hole, we would have had to cut through the race course to get over there. Instead, we continued north toward Toms River and decided that we’d see how far we could go.

I attempted to find the Ron Minchin Pass across Good Luck Point, and made it almost all the way across before our 500lb. depth sounder started going off. We muddled through though, and continued into the river. Between the light winds and boat wakes, we couldn’t keep the jib full, and we weren’t heading far enough downwind to run wing and wing, so we just put the jib away and had a very slow run on just the mains’l.

We eventually took down the main, brought up the keel, and switched to the motor before exploring the portion of the river that appears as an inset on the chart. It turned out that it didn’t go a whole lot further that we’d been before, but around the bend we did pass through a couple marinas, past the River Lady (Toms River’s very own riverboat), and to the head of navigation at Huddy Park. It eventually comes to a fork with footbridges on either side that we couldn’t have fit under with our mast down. 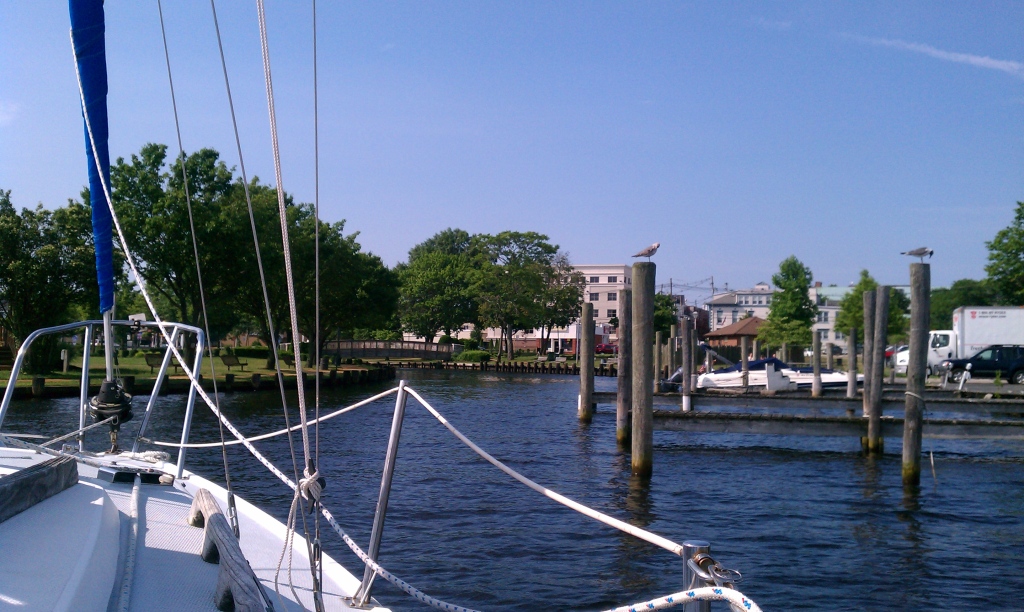 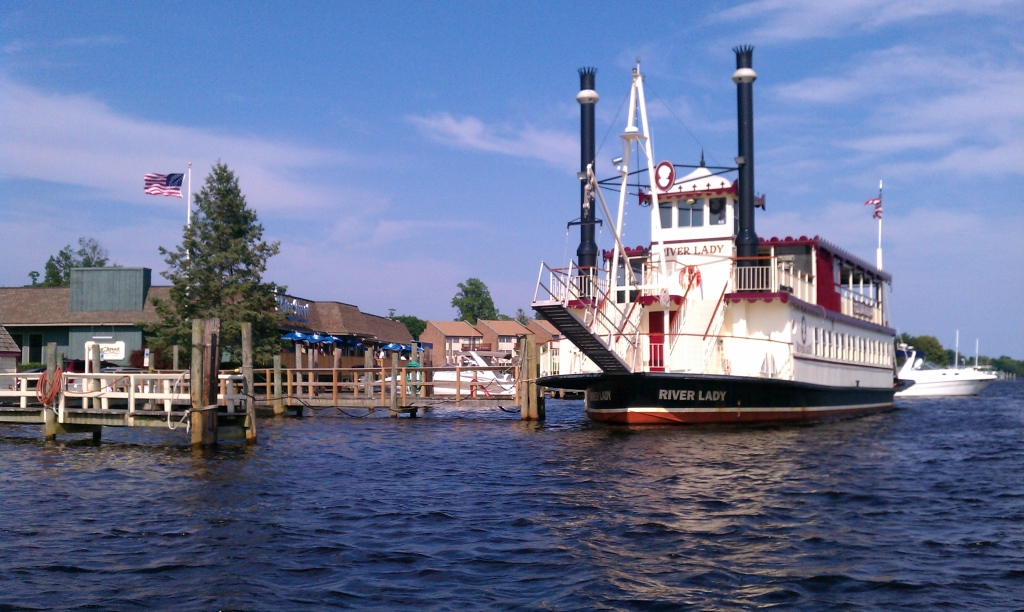 There wasn’t really a whole lot to do back in there, and I kind of felt like our dawdling put us in the way of other boats trying to navigate, so we turned around and followed some state troopers out toward the main body of the river. As we were rigging for sailing again there was a catboat roaring around, having a great time. We were still in lazy sailing mode and didn’t bother deploying the jib since it was going to be a lot of tacking to get out of the river, but about the same time that we were heading up, so was the catboat. And whenever two sailboats are going in kind of the same direction, they’re racing.

She was an Atlantic City, I think maybe a 24, although it’s hard for me to tell sometimes with catboats since they often seem more substantial for their length than a lot of sloops. Her skipper was singlehanding, and she was sailing with a single reef on a huge main. She was faster than us but we could point higher, so it was and interesting challenge even though neither of us was trying terribly hard (or perhaps at all, in his case). We’ll put it down as a draw, since he eventually tacked around 180° and sailed away. Shortly thereafter, we got to a skinny and more crowded portion of the river and decided to motorsail out of the river.

When we made the turn around Good Luck Point, we were able to sail again, and Jen took the helm. She’s been pretty nervous about skippering recently, and this was a typical death grip affair. Winds were light, and there was really nothing scary going on, so I tried to be encouraging and relaxed. She sailed all the way back to Trixie’s and got more comfortable toward the end, so hopefully she can work through this.

We had a good day overall. There were no problems getting the boat on the trailer, except that I nearly got the truck locked in Berkeley Island Park. Sailing so close to the solstice, the sun seemed to never go down. 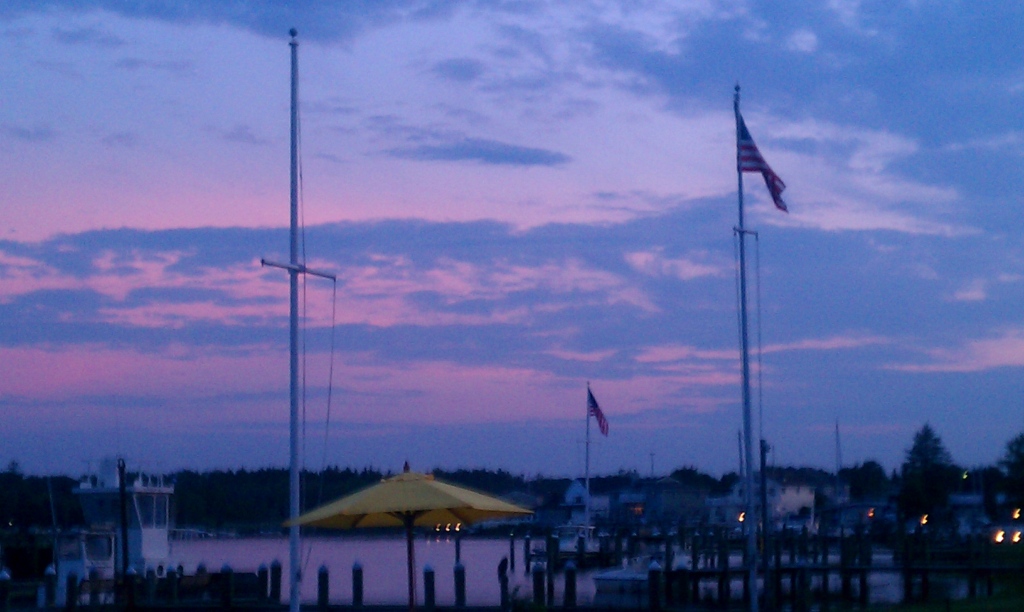